Read Confessions of a Greenpeace Dropout: The Making of a Sensible Environmentalist Online

Confessions of a Greenpeace Dropout: The Making of a Sensible Environmentalist 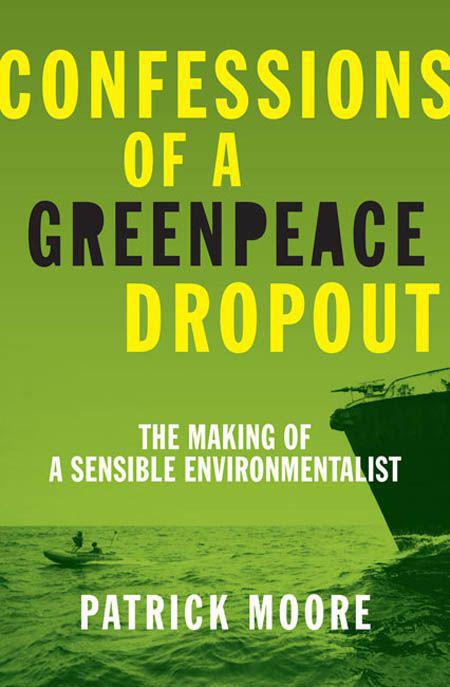 Chapter 13 - Round Tables and Square Pegs

Chapter 14 - Trees Are The Answer

Chapter 15 - Energy to Power Our World

Chapter 18 - Chemicals Are Us

Chapter 19 - Population Is Us

Chapter 21 - Charting a Sensible Course to a Sustainable Future

No part of this book, covered by copyright, may be reproduced or used in any form or by any means (graphic, electronic, or mechanical, including photocopies, taping, or information storage and retrieval systems) without the prior written consent of the publisher.

The making of a
sensible environmentalist

Trees are the Answer

This book is dedicated to the environment and its miracles of nature that provide food, shelter, clothing, transportation, communication, and the energy to power our world.

It is also a tribute to the people who work in fields and forests, on the sea and underground, in labs, factories and power plants, making civilization a continuing reality.

sustainable future on our beautiful Earth.

Here’s what I believe.
—Patrick Moore

I would like to acknowledge the many teachers and mentors I have had the privilege to study under and to receive wisdom from over the years. These include Dr. Oscar Sziklai, Dr. Hamish Kimmins, Dr. Buzz (C.S.) Holling, Dr. Vladmir Krajina, Professor Alistair Lucas, Professor Michael Goldberg and Dr. David Suzuki, during my years at the University of British Columbia.

I would also like to acknowledge the contribution of Tom Tevlin and Trevor Figueiredo, my partners in Greenspirit Strategies and Beatty Street Publishing, and of Dawn Sondergaard and Christine Tevlin, all of whom have spent many hours to help make this book a reality.

I want to thank Alex Avery for his assistance with the early stages of the project, and for suggesting the main title of the book.

Many thanks to Deborah Viets, who performed the final edit and taught me a thing or two about punctuation and style.

I am grateful for the unfailing support of Eileen Moore, my wife and partner for 37 years. She worked beside me in many early Greenpeace campaigns, raised our two fine boys, Jonathan and Nicholas, traveled with me to distant shores, and continues to work with me through thick and thin.

The Third World War will be the war to save the environment.

— U Thant, director-general of the United Nations, 1969

You could call me a Greenpeace dropout, but that is not an entirely accurate description of how or why I left the organization 15 years after I helped create it. I’d like to think Greenpeace left me, rather than the other way around, but that too is not entirely correct.

The truth is Greenpeace and I underwent divergent evolutions.I became a sensible environmentalist; Greenpeace became increasingly senseless as it adopted an agenda that is antiscience, antibusiness, and downright antihuman.

This is the story of our transformations.

The last half of the 20
th
century was marked by a revulsion for war and a new awareness of the environment. Beatniks, hippies, ecofreaks, and greens in their turn fashioned a new philosophy that embraced peace and ecology as the overarching principles of a civilized world. Spurred by more than 30 years of ever-present fear that global nuclear holocaust would wipe out humanity and much of the living world, we led a new war—a war to save the earth. I’ve had the good fortune to be a general in that war.

My boot camp had no screaming sergeant or rifle drills. Still, the sense of duty and purpose of mission we had at the beginning was as acute as any assault on a common enemy. We campaigned against the bomb-makers, whale-killers, polluters, and anyone else who threatened civilization or the environment. In the process we won the hearts and minds of people around the world. We were Greenpeace.

I joined Greenpeace before it was even called by that name. The Don’t Make a Wave Committee was meeting weekly in the basement of the Unitarian church in Vancouver.

In April 1971 I saw a small article in the
Vancouver Sun
about a group planning to sail a boat from Vancouver across the North Pacific to protest U.S. hydrogen bomb testing in Alaska. I immediately realized this was something real I could do, way beyond taking ecology classes and studying at a desk. I wrote the organizers and was invited to join the weekly meetings of the small group that would soon become Greenpeace.

The early days of Greenpeace were heady indeed. It was 1971 and the height of the hippy era. I was in a bitter battle to obtain my PhD in ecology at the University of British Columbia over the objections of a few industry-backed professors who had forced their way onto my thesis committee. I became radicalized and joined the group of antinuclear activists.

We realized all-out nuclear war would be the end of both civilization and the environment-hence the name we soon adopted, Greenpeace, as in “let it be a green peace.” We chartered an old fishing boat to sail to ground zero to focus public attention on the nuclear tests. We believed the revolution should be a celebration. We sang protest songs, drank beer, smoked pot, and had a generally good time—even while being tossed about on the notoriously dangerous waters of the North Pacific.

We survived that first voyage, but we never made it to the test site. The U.S. Coast Guard cut us off at Akutan Harbor and made us turn back. However, our mission was a success because our protest was reported in the media across North America. As a result, thousands of people from Canada and the U.S. marched on border crossings across the continent on the day of the H-bomb test and shut the crossings down. Soon after, President Nixon cancelled the remaining tests in that series. We could hardly believe what our ragtag band of peaceniks had accomplished in just a few short months. We realized that a few people could change the world if they just got up and did something.

It was the beginning of a very wild ride.

High on the victory of vanquishing a world superpower, in early 1972 we repeated our “take it to ground zero” protests with France, which was still conducting atmospheric tests of atomic and hydrogen bombs on Mururoa, a small atoll in the South Pacific. France had refused to sign the 1963 treaty banning atmospheric testing signed by the Soviet Union, Great Britain, and the United States.

We found David McTaggart, a Canadian living in New Zealand who was willing to sail his small boat across the South Pacific, and the next protest was on. The first year the French Navy rammed a hole in the boat and forced it ashore. The second year they beat up our captain, an event secretly photographed by one of the crew. The beating catapulted the story to the front pages of French newspapers. Within the year France announced it would no longer conduct nuclear tests in the atmosphere.

In three years our little band of protesters had forced two superpowers to alter substantially their nuclear weapons testing programs. We proved again that a small group of dedicated people could effect real change at a global level. Nothing could stop us now.In 1975 we took on the challenge of saving the whales from extinction at the hands of huge factory whaling fleets. This campaign really put Greenpeace on the map and made us a worldwide icon. By the early 1980s we were confronting the annual slaughter of baby seals, opposing driftnet fisheries, protesting toxic waste dumping, blocking supertankers, and parachuting into nuclear reactor construction sites. Our campaigns were highly successful at changing opinions and energizing the public. Through the power of the media and the people, we were steadily influencing government policies and forcing industries to clean up their acts. We had achieved the support of the majority of people in the industrialized democracies.

By 1982 Greenpeace had grown into a full-fledged international movement with offices and staff around the world. We were bringing in $100 million a year in donations and half a dozen campaigns were occurring simultaneously.

During the early 1980s two things happened that altered my perspective on the direction in which environmentalism, in general, and Greenpeace, in particular, were heading. The first was my introduction to the concept of sustainable development at a global meeting of environmentalists. The second was the adoption of policies by my fellow Greenpeacers that I considered extremist and irrational. These two developments would set the stage for my transformation from a radical activist into a sensible environmentalist.

As one developing country activist put it, taking a stand against development in his woefully poor country would get him laughed out of the room. It was hard to argue with his position. A well-fed person has many problems, a hungry person has but one. The same is true for development, or lack of it. We could see the tragic reality of poverty on the outskirts of our Kenyan host city. Those of us from industrialized countries recognized we had to be in favor of some kind of development, preferably the kind that didn’t ruin the environment in the process. Thus the concept of sustainable development was born.

Eternal by Cynthia Leitich Smith
Isabel and the Wolf: (Part 3) by Ariana Hawkes
Tempting Gray - Untouchables 02 by T. A. Grey
All In by Simona Ahrnstedt
The Unseen by Bryan, JL
The Queen of Tears by Chris Mckinney
The Team That Stopped Moving by Matt Christopher
Guilty Pleasure by Justus Roux
Halfway There by Aubrie Elliot
Crying Wolf (Black River Pack Book 1) by Rochelle Paige
Our partner