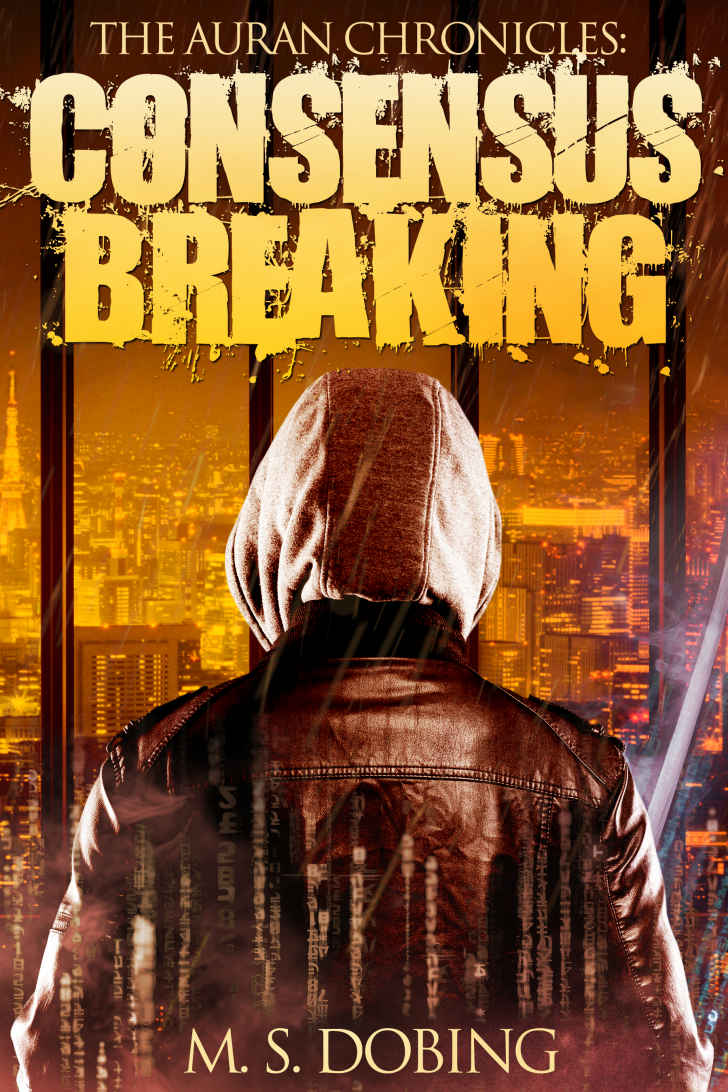 The tower, forged in another age, in another realm, loomed in the distance. Gold lightning split the sky, spearing through the cloud and striking the ground far below.

The landing platform jutted out as before, beckoning him in. With a final burst of speed, he soared on, guiding his astral self to a smooth landing on the rust-coloured stone.

The wind was lesser here, some kind of invisible force keeping the worst of the elements at bay. Unfortunately, the rest of the structure was not as well cared for. The flagstones, once polished and flat, cut to neat angles, now lay crooked and cracked. Strange weeds, red in colour, forced their way upwards through the gaps. Similar foliage grew across the walls, obscuring what had once been magnificent stonework. As he walked forwards, he caught sight of the massive iron door, where many months earlier he’d seen the serpentine warrior emerge. Back then, the door had stood tall, unyielding. Now it lay rusted and warped, a black void in its wake.

What had happened here?

There didn’t seem to be any immediate danger, but Seb raised his defences regardless, and the air shimmered around him as he moved forwards.

He reached the open doorway. A spiral staircase led both up and down.
Sensing
out, he received a faint response from above. With a destination in mind, he stepped into the tower.

Minutes later he stopped at a wooden door that was soft with damp and hanging off rusted hinges. He pushed gently, and the door grudgingly swung inward, revealing a circular room that had once been a study, but now resembled one that had seen the insides of a tornado.

A fire burned in the hearth, spitting and crackling in the gloom. The purple flames cast a comforting hue, and as Seb watched, the image of chaos dissipated, revealing a scene he assumed was much more reminiscent of the tower in its better days. A desk stood at the far end of the room, clear of clutter. A thick rug covered the stone before him, and in a massive chair, facing the fire, sat the serpentine creature he’d met on his very first Weave-walk.

‘Mageling, it is good of you to return. It has been too long,’ the creature did not turn as it spoke. Its red eyes simply stared into the fire.

‘Has it? I thought it was just months.’

Seb found another seat, strangely the right size for him, and sat down. The light from the fire bathed him, the Weave pulsing from it, filling his veins.

‘It feels good,’ he admitted.

The creature turned in his direction. Red eyes bored through his defences. He didn’t flinch; instead, he simply allowed the scrutiny. For the creature’s obvious power, he did not sense any obvious danger.

‘You have developed quickly,’ the creature said after a time, returning its gaze to the fire.

‘I had to. Marek and the sheol attacked the Magistry.’

‘I am aware. Many lives were lost.’

‘You do yourself a disservice. You fought hard. You studied. You learned. You showed resilience. Luck naturally follows these things.’

‘What brings you here, mageling?’

‘To be honest I’m not sure. You seemed to recognise me before, when I last came here. You implied that you knew me.’

The creature chuckled, the noise like gravel being shovelled. ‘
Knew
you? I suppose that’s a logical statement, from your perspective.’

The creature rose from its seat, towering high above him. It went to a balcony that Seb hadn’t noticed previously.

Seb crossed the room and joined the creature. He looked out across an expanse of red-pink cloud that extended as far as the eye could see. Far in the distance he could just make out the swirling vortex that he assumed was the access point he’d used to enter this realm.

‘Clouds. Lots of clouds,’ he said, knowing this was not what the creature was getting at.

‘Your eyes do not lie. But look, see again. Use those fledgling abilities of yours.’

Seb channelled Sentio. He
sensed
out again, seeing with the Weave, not with his eyes. A new veneer dropped over his vision. The clouds remained, but they were no longer opaque. He could see beyond them now. He could see down, beyond the mountains from which the tower was constructed.

Right down to the enormous cracks that cleaved the land as far as he could see.

‘The first signs. Cracks in the Weave.’

‘The Weave is unbalanced. Recent actions have caused fractures in the very fabric of reality. So, to respond to your question, it is definitely
not good
.’

The creature let out that gravelly chuckle again. ‘No, Seb, you did not do this. Your definition of recent and mine are very different. Did your actions feature in this? Yes, they did, but they are only one in a series of thousands of actions that have spanned time and space for many centuries. No, it is your future actions that will play a much bigger part in how this turns out.’

‘What? If reality is breaking up, what can I do about it?’

The creature sighed and turned. ‘You still do not see.’

‘I see the cracks, but that’s it. I don’t have the benefit of all this power and knowledge that you have.’

‘Don’t talk in riddles to me again. Inevitable? What is? Why can’t you do something? You’re obviously more connected to the Weave than I will ever be.’

‘Not riddles. When you have learned you will understand. When you
remember.
’

Seb looked back at the cracked earth and frowned. He pressed his hands on the balcony, gripping the cold stone. ‘So then, what can I do about it? I was hoping you would help me, not the other way round.’

‘You will see, Seb, that what you seek, and what is required to save the Weave are much more intertwined than you realise.’

‘So what do I do now, then? Can you give me anything?’

The creature smiled and lowered itself down on one knee, its head now only just above Seb’s.

‘Do not despair, mageling. I sense your frustration. Continue on your path of discovery, I am confident that progress is just around the corner. When the time is right, when you are ready, you will return, and we will take the next steps together.’

The wind was growing in strength, whatever force protecting the tower weakening to such a degree that Seb was forced to step inside. The fire was out now, the room back into its former state of disarray. Behind him the creature remained on the balcony, facing inward, but its form was already fading.

‘I must…’ the creature whispered. My form cannot maintain…more.’

‘What are you? At least tell me that?’

A gust of wind billowed through the room, sending sheets of dried parchment fluttering in the air. A voice drifted across, dancing on the swirling currents.

Seb opened his eyes. The clouds and storms from the Weave-walk vanished into memory. A fire of the real world burned before him, the dying flames crackling in the night. On the other side Sylph lay asleep, her eyes twitching from no doubt another of her nightmares.

Seb stood and stretched out tired muscles. He walked away from the fire, to the perimeter of trees that surrounded their campsite. Cade’s aura glowed in the dark, and Seb joined his friend in the shadows.

‘I found it. The Tower I mean. But aside from that, not really. I’m not sure. I need to think on it a bit.’

‘And the plan. You still want to go through with it?’

‘I guess not.’ Cade nodded towards the fire. ‘Shall I wake her?’

‘No, not yet. She needs the sleep. This will be harder for her than any of us.’

The men fell into silence. Seb channelled Sentio and scanned the structures below. Invisible to normal eyes, yet hidden in plain sight for the Aware, the castle loomed amongst the everyday buildings. He’d been debating this as an option for months now, when all other avenues of acquiring knowledge had failed. The fabled Families hadn’t appeared. With the Magistry destroyed, he was left with only one other place he knew existed that could contain the information he sought.