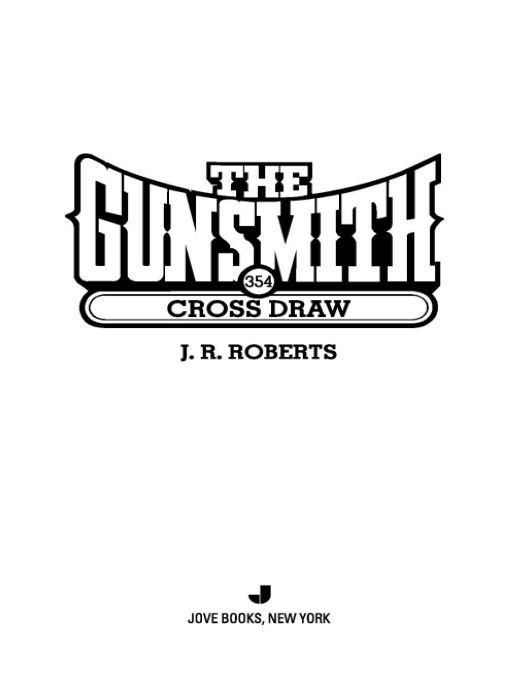 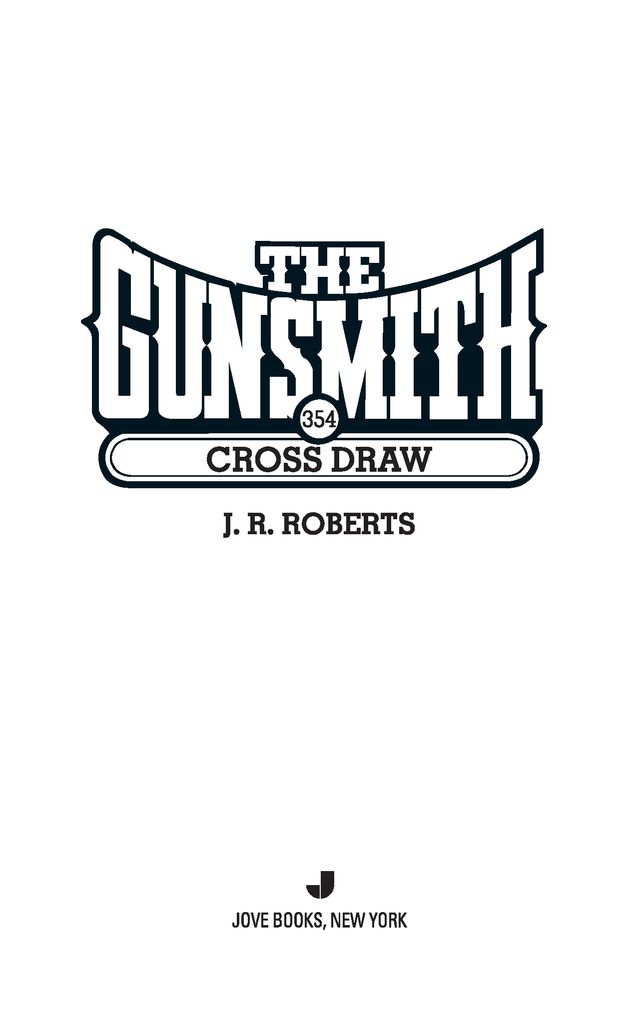 Table of Contents
Title Page
Copyright Page
Â
ONE
TWO
THREE
FOUR
FIVE
SIX
SEVEN
EIGHT
NINE
TEN
ELEVEN
TWELVE
THIRTEEN
FOURTEEN
FIFTEEN
SIXTEEN
SEVENTEEN
EIGHTEEN
NINETEEN
TWENTY
TWENTY-ONE
TWENTY-TWO
TWENTY-THREE
TWENTY-FOUR
TWENTY-FIVE
TWENTY-SIX
TWENTY-SEVEN
TWENTY-EIGHT
TWENTY-NINE
THIRTY
THIRTY-ONE
THIRTY-TWO
THIRTY-THREE
THIRTY-FOUR
THIRTY-FIVE
THIRTY-SIX
THIRTY-SEVEN
THIRTY-EIGHT
THIRTY-NINE
FORTY
FORTY-ONE
FORTY-TWO
FORTY-THREE
FORTY-FOUR
FORTY-FIVE
Â
BITTERROOT VALLEY
Uninvited
“Jesus,” Sheriff Evans said, “the Gunsmith in my town. If word gets out, there'll be blood in the streets.”
“You're bein' too dramatic, Sheriff,” Doc Jacobs said.
“Am I? What do you think will happen if word gets out he was here?”
“I don't know.”
“Gunmen will come out of the woodwork,” Evans said, “that's what. How long is he stayin'?”
“I don't know.”
“Well, how bad is he hurt?”
“I don't want to feed into your drama,” Jacobs said.
“What do you mean?”
“At the moment,” Doc Jacobs said, “the Gunsmith can't move his hand.”
Evans stared at Jacobs.
“Sheriff?”
“Huh? Oh, uh, you mean . . . his gun hand?”
“That's what I mean,” Jacobs said. “The puncture wound in his arm has affected the motor functions of his hand.”
“Doc!”
“Like I said,” Jacobs replied, “he can't use his right hand.”
“Jesus!” Evans said. “If
this
gets out, we'll be drowning in gunnies.”
“Why would it get out?” the doctor said. “I'm not going to tell anyone. Are you?”
DON'T MISS THESE ALL-ACTION WESTERN SERIES FROM THE BERKLEY PUBLISHING GROUP
THE GUNSMITH by J. R. Roberts
Clint Adams was a legend among lawmen, outlaws, and ladies. They called him . . . the Gunsmith.
LONGARM by Tabor Evans
The popular long-running series about Deputy U.S. Marshal Custis Longâhis life, his loves, his fight for justice.
SLOCUM by Jake Logan
Today's longest-running action Western. John Slocum rides a deadly trail of hot blood and cold steel.
BUSHWHACKERS by B. J. Lanagan
An action-packed series by the creators of Longarm! The rousing adventures of the most brutal gang of cutthroats ever assembledâQuantrill's Raiders.
DIAMONDBACK by Guy Brewer
Dex Yancey is Diamondback, a Southern gentleman turned con man when his brother cheats him out of the family fortune. Ladies love him. Gamblers hate him. But nobody pulls one over on Dex . . .
WILDGUN by Jack Hanson
The blazing adventures of mountain man Will Barlowâfrom the creators of Longarm!
TEXAS TRACKER by Tom Calhoun
J.T. Law: the most relentlessâand dangerousâmanhunter in all Texas. Where sheriffs and posses fail, he's the best man to bring in the most vicious outlawsâfor a price.
THE BERKLEY PUBLISHING GROUP
Published by the Penguin Group
Penguin Group (USA) Inc.
375 Hudson Street, New York, New York 10014, USA
Penguin Group (Canada), 90 Eglinton Avenue East, Suite 700, Toronto, Ontario M4P 2Y3, Canada
(a division of Pearson Penguin Canada Inc.)
Penguin Books Ltd., 80 Strand, London WC2R 0RL, England
Penguin Group Ireland, 25 St. Stephen's Green, Dublin 2, Ireland (a division of Penguin Books Ltd.)
Penguin Group (Australia), 250 Camberwell Road, Camberwell, Victoria 3124, Australia
(a division of Pearson Australia Group Pty. Ltd.)
Penguin Books India Pvt. Ltd., 11 Community Centre, Panchsheel Park, New Delhiâ110 017, India
Penguin Group (NZ), 67 Apollo Drive, Rosedale, North Shore 0632, New Zealand
(a division of Pearson New Zealand Ltd.)
Penguin Books (South Africa) (Pty.) Ltd., 24 Sturdee Avenue, Rosebank, Johannesburg 2196,
South Africa
Â
Penguin Books Ltd., Registered Offices: 80 Strand, London WC2R 0RL, England
Â
This is a work of fiction. Names, characters, places, and incidents either are the product of the author's imagination or are used fictitiously, and any resemblance to actual persons, living or dead, business establishments, events, or locales is entirely coincidental.
Â
CROSS DRAW
Â
A Jove Book / published by arrangement with the author
Â
PRINTING HISTORY
Jove edition / June 2011
Â
Copyright Â© 2011 by Robert J. Randisi.
Â
All rights reserved.
No part of this book may be reproduced, scanned, or distributed in any printed or electronic form without permission. Please do not participate in or encourage piracy of copyrighted materials in violation of the author's rights. Purchase only authorized editions.
For information, address: The Berkley Publishing Group, a division of Penguin Group (USA) Inc.,
375 Hudson Street, New York, New York 10014.
Â
eISBN : 978-1-101-51527-3
Â
JOVE
Â®
Jove Books are published by The Berkley Publishing Group,
a division of Penguin Group (USA) Inc.,
375 Hudson Street, New York, New York 10014.
JOVE
Â®
is a registered trademark of Penguin Group (USA) Inc.
The “J” design is a trademark of Penguin Group (USA) Inc.
Â
Â
Â

ONE
When the left rear wheel went, Rosemary Collins wondered what else could go wrong.
“What happened?” Abigail asked from the back of the covered wagon.
Rosemary leaned over to take a look. Sure enough, the wheel was lying on its side, the wagon leaning to the left.
“Everybody out!” she called.
“What?” Abigail's voice grated on her. The other girls simply got out of the wagon without comment, but Abigail bitched the entire time.
All five women stood and stared down at the wheel.
“What happened?” Jenny, the youngest, asked.
“I'm not sure,” Rosemary said, “but at least the wheel isn't broken.”
“Is the axle broken?” Delilah asked.
Rosemary bent over to look and said, “I hope not.”
“How could we have left St. Louis without somebody who knew what they're doing?” Abigail demanded.
The other four women ignored her. It had taken them weeks, but they'd finally come to an agreement that this was the best way to handle her.
“I think that thing that holds the wheel on broke,” Rosemary said, pointing. “If we could lift the wagon we could put the wheel back on. Then we'd just have to slide something in this hole to hold it on.”
“Something like what?” Abigail asked.
Rosemary got down on one knee.
“A piece of wood. We just have to slide it into this hole.”
“You don't know what you're doin',” Abigail said.
“I'm trying to figure it out, Abigail.” Rosemary stood up. “At least I'm being constructive. All you're doing is complaining.”
Abigail, the oldest of the five women, crossed her arms and pouted at being criticized.
“What can we do?” Jenny asked.
“We have to figure out a way to raise the wagon,” Rosemary said, “then figure out how to slide the wheel on. And finally, how to get it to stay on.”
“Oh my god,” Abigail said.
“We're lucky the wheel enclosed by an iron rim,” Rosemary said. “It kept the wood from snapping.”
Rosemary looked at the four other womenâAbigail, Jenny, Delilah, and Morgan. She was going to have to assign each a task and hope that, by working together, they could get the wagon fixed.
Because they were out in the middle of the Arizona nowhere.

Clint spotted the group from a ways off. His intention was to skirt around them and mind his own business. However, when he got to the top of a hill, he was close enough to notice two things. One, there were five women and no men in sight. Two, they had a broken wheel.
“Damn it, Eclipse,” he said to his big Darley Arabian. “Can't very well ride right by them, can we?”
The Darley nodded his big head.
“Yeah, maybe you can ride by them,” he said, “but I can't.”
Clint directed Eclipse down the hill, toward the covered wagon and the five women who were, apparently, traveling alone.
Â
“Rosemary!”
She turned at the sound of Jenny's voice, and the panic in it.
“Delilah,” she said, “get me the rifle.”
Delilah ran to the back of the wagon, took out the Winchester, and passed it to Rosemary. She held it in both hands, not pointing it but holding it at the ready as the man came toward them.
“Who is that?” Abigail asked.
They ignored her.
“What does he want?” she demanded.
They ignored her.
“What are you waiting for, Rosemary?” she asked. “Shoot him!”
“Shut up, Abigail.”
“What?”
Rosemary turned to the older woman and shouted, “Shut the hell up!”
Abigail subsided into shocked silence and the five women watched the mounted man approach.
TWO
Clint advanced toward the five women, warily eyeing the one holding the rifle. She looked like she knew how to use it.
The women were of varying ages. The one holding the rifle looked to be in her early thirties. Two of the others looked older, and two younger. Three of the women looked frightened. Oneâthe oldestâlooked more annoyed than anything else. The face of the one with the rifle was impassive. Lovely, but impassive.

How to Get Away With Murder in America by Evan Wright
Singularity: Star Carrier: Book Three by Douglas, Ian
Dark Rapture by Hauf, Michele
The Girl with the Mermaid Hair by Delia Ephron
Breach of Promise by James Scott Bell
Speed Times Five by Franklin W. Dixon
The Hunting Ground by Cliff McNish
Honor Bound by Michelle Howard
Longbourn by Jo Baker
The Changeling by Helen Falconer
Our partner