Crushing on Love (The Bradens of Peaceful Harbor, Book Four) 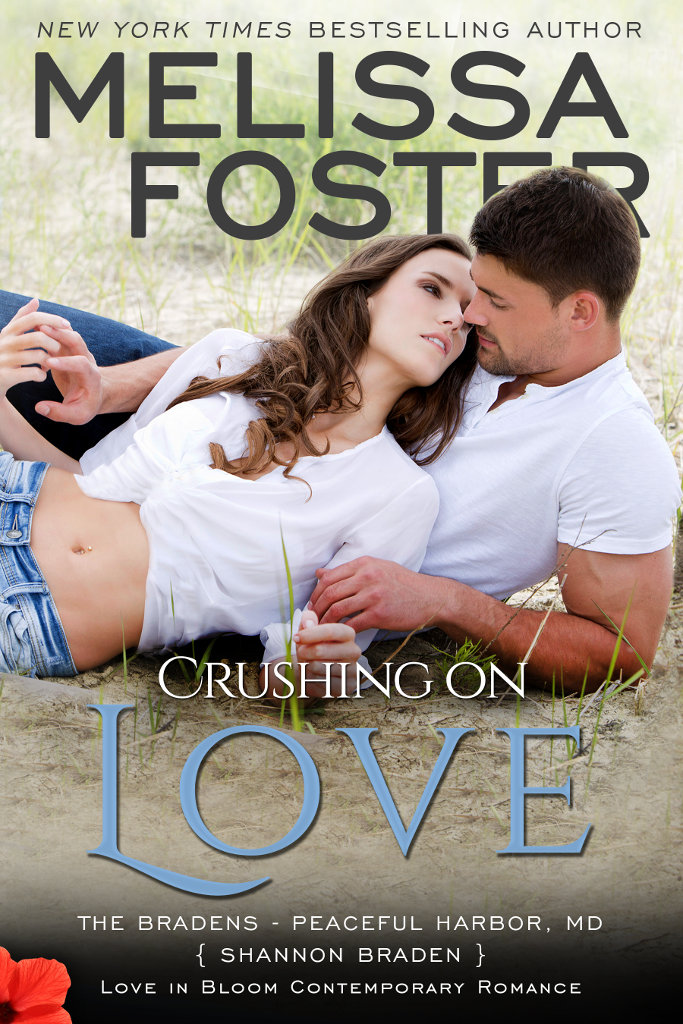 The Bradens at Peaceful Harbor

Steve and Shannon are wickedly naughty in a primal, playful, oh-so-delicious way. They definitely controlled the ink on these pages, and I was merely along for the sexy ride. I hope you love them as much as I do! ~ Melissa

Sign up for my newsletter
to keep up to date with new releases and to receive an exclusive short story.
www.melissafoster.com/News

The Bradens are just one of the series in the Love in Bloom big-family romance collection. Characters from each series make appearances in future books so you never miss an engagement, wedding, or birth. A complete
list of all series titles
is included at the end of this book.

—Get
FREE
first in series
Love in Bloom ebooks
HERE

spark too many hot conversations

About Whisper of Love

STEVE JOHNSON TOOK off his sweaty shirt and guzzled a bottle of water. Nothing beat a predawn run, especially after a shitty night’s sleep. He set the empty bottle and shirt on the steps leading to his rustic log cabin and crossed the yard to the chopping post, determined to work the remaining tension from his body. A six-mile run on the rough terrain of the Colorado mountains should have worked out all his piss and vinegar, but not this morning.

Sun beat down on his shoulders as he centered a slab of wood on the tree stump that served as his chopping post, trying to ignore the reason he’d been unable to sleep last night. He filled his lungs with the scents of nature and tranquility. He knew every sound and smell of the area, could differentiate every species of animal and plant in the forest, and anticipated inclement weather well before it hit. His body was attuned to the mountains as if he were a part of them.

He hoisted the ax over his shoulder, thoughts he was trying to ignore pushing back in like adamant thieves. He swung the ax. A loud
crack
echoed in the forest—and in his head—rattling the truth of his angst free. Shannon Braden was back—and she’d come home last night wrapped around Cal Hayden on the back of his horse.

He ground his teeth against that reality and set another log in place.

Smart, sexy-as-sin, talks-a-mile-a-minute Shannon
. He’d known her for years. His sister, Jade, was married to her second cousin, Rex. Shannon had spent weeks doing research on red foxes in the mountains. She’d been staying at her uncle’s ranch in Weston, but he knew the company she was working with had made arrangements for her to stay at the vacant cabin just around the bend for the remainder of the project. He swung the ax, thinking of the weeks she’d spent flitting in and out of his peaceful life, full of energy and never-ending conversations—mostly one-sided, which she didn’t seem to mind. Truth be known, neither did he. Listening to Shannon rattle on about
anything
was hot. She tangled up his thoughts in ways no other woman ever had, which was just his luck. Steve wasn’t into meaningless hookups, and Shannon’s life was in Maryland, while his was there on the mountain, which rooted Shannon Braden firmly in his off-limits zone.

The past couple of weeks had been quiet while she’d returned home to Maryland to attend her brother’s wedding, and the fact that Steve had noticed, and disliked it being quiet, had thrown him for a loop.

His mind reeled back to last night again. He’d heard Cal riding back down the mountain about two hours after he’d arrived. As he swung the ax, he wondered if Shannon had done some hands-on research with Cowboy Cal last night.

He set another log in place, telling himself it was none of his damn business if she had, and split the log so hard the two halves flew ten feet from the stump. Another log, another split. And so became his stress-relieving pattern as the sun sailed higher, taking the bite off the chilly spring morning.

A mass of birds took off from the treetops. Steve paused midswing, a smile tugging at his lips.
Shannon
. He split another log, trying to ignore his accelerating pulse at the thought of her flitting back into his life.

The sweet sounds of her humming floated into his ears, and he tried harder to deny the thrum of heat racing down his spine. He heard the crunching of leaves and his smile widened further. Damn, he needed to get a grip.

He forced the foolhardy smile from his lips, replacing it with what he hoped was a less lustful one, and turned to find the all-too-chipper and insanely hot brunette. Her hair was piled on her head in a messy bun, a few dark tendrils curling past her shoulders. She held a mug in each hand. Curls of steam rose into the air. Her pink shirt hitched on her breasts, and he chalked that up to the list of things he was futilely trying not to react to. But his body wasn’t on board with the off-limits plan, and it brimmed with heat. It had been a hell of a lot easier to be around her when she was staying at her uncle’s house in town. At least then by the time he saw her she had a freaking bra on.

He dropped his eyes to avoid staring, but her flannel pajama pants hung low on her hips, revealing a sliver of taut skin just below her belly button. Christ, she was gorgeous. Striving for a safe view, he looked at her leather boots. Boots were safe. There was nothing sexy about boots. Bright pink laces hung loose over the dark leather, her pajama pants bunched around the tops, showing another flash of skin. He pictured her shoving her bare feet into them before jaunting out the door with her mind-blowing smile in place. There must be something wrong with him, because he found that sexy, too.

“You should lace those up.” He ran a hand through his hair, grinding his teeth against the way his entire body was buzzing like a live wire.

“Well,
Mr. Safety
. I missed you, too.” She thrust a mug toward him with a coy smile. “Just the way you like it. Bitter as weeds.”

She was too damn cute, too damn social, and too damn temporary for the likes of him.

He reached for the mug. “Thanks, Butterfly.” The nickname flew off his tongue without thought, just as it had the first time she’d flitted into his yard, turned his insides to fire, and flitted back out. He was surprised to realize he’d missed saying it while she was gone.

Grizz
. Hell if he hadn’t missed that, too. Her eyes dropped to his bare chest, lingering long enough for him to feel it lower.
Much lower
. Her cheeks flushed, and she slid those gorgeous hazel eyes to his ax—the one in his hand, not the one in his pants.

“Preparing for a cold night, or thinking about becoming a serial killer?”

I wouldn’t have cold nights if you were in my bed
. As if on cue, his body stirred again, reminding him it’d been far too long since he’d been with a woman.

“As
interesting
as becoming a serial killer sounds, I don’t think I’m cut out for it.”

“I missed that smart mouth of yours,” he said sarcastically. He’d been fantasizing about her full lips and sassy mouth ever since they’d reconnected at Rex and Jade’s wedding several months ago. But she was only there until her project ended, so sarcasm it was.

“Heard you ride in with Cal last night. How long are you here for?” He hadn’t just heard her arrive. He’d gone out to see who was riding up the mountain and had seen her arms wrapped around Cal from behind as they rode past the overlook. In the moonlight they’d looked like a frigging Hallmark card.

“A few weeks. Four and a half, I think. Something like that.” She stretched one arm, flashing even more of her midriff.

“You could have called me to bring you up the mountain.” He shifted his eyes away, trying to figure out who had taken possession of his mouth.
Called me?
He had nothing against Cal. He was a nice guy and was one of the most respected horse trainers around. And he shouldn’t give a shit who Shannon was with. Sure, she was hot, smart, and he liked her ballsy attitude, but he liked his life just the way it was. The last thing he needed was a social butterfly like her bringing noise and chaos into his life, telling him what to do or how to live.

“I know.” She kicked at the dirt, her eyes downcast. “Treat and Max stopped by in the afternoon and I went into town with them to visit my uncle Hal and my cousins. Cal was there and he offered to drive me back, since he lives in Preston. It was only once we got back to his place that he suggested we ride up on horseback. Besides, you don’t exactly love going into town.”

Great, now he was stuck envisioning her at Cal’s sprawling horse ranch.

He finished his coffee and handed her the mug. “Thanks. It was perfect.” He turned to set another log on the stump. “You ought to be careful bringing guys up to your cabin,” he said with his back to her.

“I thought I left my overprotective big brothers at home.” She sighed. “I hardly think Cal is a threat. He’s known Rex forever.”

Steve rested the ax over his shoulder, weighing his response. The last thing he wanted to be was her big brother, and he’d known Cal forever, too. Cal wasn’t the kind of guy to take advantage of a woman, but that didn’t stop Steve’s gut from churning at the thought of them cozied up together.