Read Cry of the Sea Online

Cry of the Sea 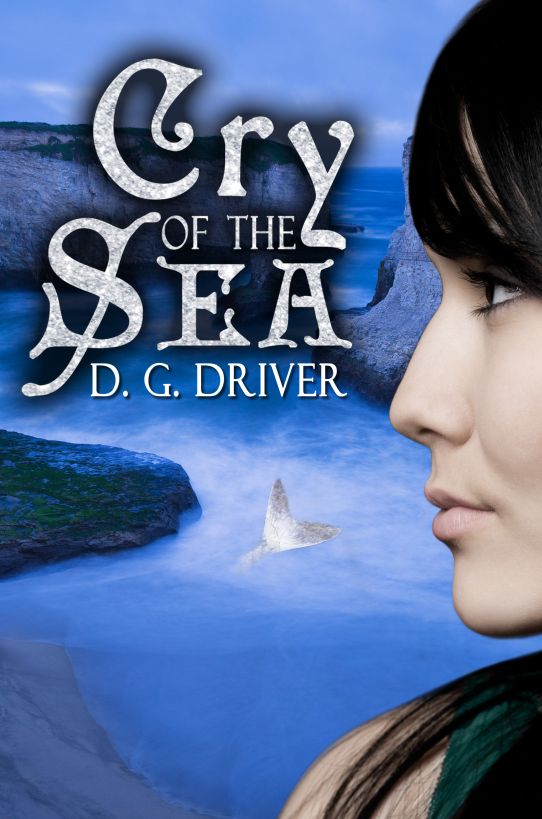 Cry of the Sea
by D. G. Driver

CRY OF THE SEA

Juniper Sawfeather is choosing which college
to attend after graduation from West Olympia High School next year.
She wants to go to San Diego to be far away from her environmental
activist parents. They expect her to think the way they do, but
having to be constantly fighting causes makes it difficult to be an
average seventeen-year-old high school student. Why do her parents
have to be so "out there?"

Her feelings on the subject are changed when
she and her father rush to the beach after a reported oil spill. As
they document the damage, June discovers three humans washed up on
the beach, struggling to breathe through the oil coating their
skin. At first she thinks they must be surfers, but as she gets
closer, she finds out that these aren't humans at all. They're
mermaids!

Now begins a complex story of intrigue,
conspiracy and manipulation as June, her parents, a marine
biologist and his handsome young intern, her best friend, the
popular clique at school and the oil company fight over the fate of
the mermaids.

and again when I occasionally came
up for air.

“The most haunting time at which to
see [mermaids] is at the turn of the moon, when they utter strange
wailing cries...”

“You ready to see how the next big change in
your life is going to look?”

That was my dad, cheerfully holding the door
open as he escorted me into the gym at school for College Night. He
was excited to have me shake hands with the representative from
Washington University and get that ball rolling. I didn’t know then
that the next big change in my life would happen in less than
twelve hours—and it would have nothing to do with which college I
picked.

When we first entered the room Dad
immediately scanned all the booth banners to find his target. The
moment he saw it, he grabbed my hand and yanked me in that
direction. I actually wanted to look at some of the other booths,
and I had told him that in the car.

His response? “Why bother?”

Full of smiles and giddy as if he were
sending me to prom instead of a night of gathering brochures, he
told me that once Mom got back from her business trip we’d all go
to the University together and tour the campus. Maybe Mom would
take me to some of her classrooms and old haunts. I told him I
couldn’t wait.

But I was lying.

Lucky for me, the path to the Washington U.
booth was filled with half a dozen teachers I’d had at one point or
another. We couldn’t go more than a couple steps at a time without
one of them accosting us and saying something obnoxious like, “You
must be June’s proud father!” I’d smile painfully and nod that it
was indeed my father standing next to me. Then there would be lots
of hand shaking and bragging about how their magnificent teaching
skills motivated me to be such a great student. Dad loved it and
was happy to share with them how I was as brilliant as my mother,
and that I shared all their interests.

I let him bask in all that glory on his own,
using each teacher’s approach as an opportunity to sneak in stops
at booths and take hand-outs from happy, enthusiastic college
representatives. These friendly people hadn’t seen my grade average
or SAT scores yet. They didn’t need to with the big show of my dad
and teachers going on behind me. Besides, when they took in my
darker skin and straight, long black hair, their eyes got so big.
Juniper Sawfeather would be a great addition to their campuses,
because they could add my American Indian heritage to their
statistics and boast about their diverse communities.

Everyone was so cheerful. So welcoming. They
had no idea that I was a social outcast and that my dad, Peter
Sawfeather, the most outspoken Environmental Activist on the West
Coast, was to blame.

For one night, though, I put aside dealing
with the reality of my life as I knew it. We were a happy dad and
daughter dreaming about my future. Different dreams but both good
ones. We both wound up getting what we wanted from the event and
arrived home later that evening in pretty good moods, laughing
about the chances of me attending Brown or Stanford or Yale. Dad
teased me about sending me to an all-girl university.

“I just haven’t found that special boy who
likes to picket loggers at five in the morning.”

He smiled broadly. “I don’t see why not. What
could be more romantic than an early morning protest? You get to
shout and scream with each other. Show lots of emotion. Plus, you
get to cuddle up to stay warm. That’s what your mom and I do.”

“Dad!” I whined at him. “So not cool to talk
to your seventeen-year-old daughter about cuddling with boys!”

I smacked him playfully and chased him around
the living room. I grabbed that long, black Willy Nelson braid he
always has trailing down his back and pulled him off balance. He
made a big show of falling onto the couch. I collapsed into the
armchair.

“I win!” I shouted. We both laughed as we
gasped for air. As he struggled back to his feet, I noticed for the
first time how a little gray had started to streak his hair. Would
I age as gracefully as he had over the years? Even with all his
hard work and worry, he still looked really young for a guy in his
fifties. He only had a few small wrinkles around those brown eyes
and between his dark eyebrows. Since I was the spitting image of
him, broad nose, dark skin and all, I hoped I wouldn’t get a gray
hair until later in life either.

The phone ringing interrupted our fun and
games as my dad jumped up to answer it. He always tried to answer
the phone before it rang a second time no matter where he was in
the house. It turned out to be Mom calling from Alaska checking in
for the night.

While Dad talked on the phone, I went into
the kitchen and sifted through the college catalogs and pulled out
the ones I knew I’d never attend. Princeton, Harvard, Yale, the
all-girl schools, and Washington State University all found the
trashcan a convenient place to hide from snooping parental eyes.
I’d have put them in the recycle bin, but unfortunately (and hadn’t
I heard years of my parents complaining about this?) glossy
magazines aren’t recyclable. Plus, the trashcan has a lid, and I
kind of tucked them way down toward the bottom.

With the remaining catalogs, I made piles of
the places I really wanted to go, the places more likely to accept
me, and the places I would go if no one else accepted me. None of
my choices, even the most pathetic of them all, were within four
hundred miles of Olympia, my lovely, cold, and wet hometown.

“June,” my dad called. I poked my head around
the corner and saw him holding out the phone with his hand over the
mouthpiece. “Your mother wants to talk to you.” He whispered,
“She’s had a long day.”

Great. She’d want to talk to me about College
Night, and she was already in a bad mood. With the catalogs pressed
against my chest, I walked over to the sofa and took the phone from
my dad. I sucked in a deep breath of patience and said, “Hi
Mom.”

Dad started preparing dinner while Mom
repeated a lot of what she had just told him about her day. I
pretended I didn’t know what she was talking about, so she could
keep going on about herself and stay away from the topic of my day.
Of course I knew what she did for a living. Everyone knew. She was
on the TV news and in the newspapers all the time doing it. My mom
was a lawyer, whose main objective was to fight environmental legal
battles with CEO’s of major companies all over the world. That was
her mission in life—to destroy big companies to save polar bears,
owls, whales and ancient trees.

“So wait, Mom, what company is this?”

Mom sighed and explained. “I’m in
negotiations with Affron Oil. You know, from the commercials?”

“The ones where they’re saving the
environment one gas station at a time?”

“Well, shouldn’t they be willing to help
out?” I asked, acting as if I were that naïve. “I mean, that’s
their ad campaign.”

“Right,” Mom said. “And the cigarette
companies are paying for cancer studies.”

I acted shocked. “You mean they aren’t?”

I liked hearing Mom laugh. It was kind of
rare. She’s a serious lady.

Mom went on explaining, “They are the largest
oil distribution company in America. They drill for oil in Alaska
and ship it down the American west coast. Despite the billions of
dollars in profit the company sees every year, they have never
bothered to put any of it toward building better or more efficient
ships. Instead, they ship oil in old, run-down, leaky vessels,
which end up killing a huge amount of sea life and pollute beaches
from Alaska to Baja, California.”

I frowned. “But wasn’t there a law passed
about that? I thought you told me...”

I could actually hear the pride in her voice.
Or was it amazement that I remembered something she had done. It
made me feel a little guilty. A lot of the time when she talked to
me about her work, I tuned her out, not caring at all about what
she was saying and kind of wishing she’d stop. Apparently that was
noticeable.

I made an effort to pull that information out
of the recesses of my brain. “The law had something to do with how
the tankers are built, right?”

I could almost hear her smiling. “That’s
right, June. In 2001 a law was passed that all oil tankers are to
be constructed with a double hull to prevent oil leaks. But that
doesn’t have to be completed until 2015.”

“So the problem is...” I wasn’t quite sure I
was following.

“Affron hasn’t even started. Not one ship has
been retrofitted.”

“It’s been tough here. The whole community is
fighting against me because they need their husbands to go to work
on those tankers. There have been a few threats.”

“Mom, are you going to be okay?” Both of my
parents have been threatened before, and sometimes that meant
damage to their cars or our yard. Mom was alone up there; would
anyone dare to hurt her?

Blood of Others by Rick Mofina
I Married a Billionaire: The Prodigal Son (Contemporary Romance) by Marchande, Melanie
A Cowgirl's Pride by Lorraine Nelson
Hurricane Dancers by Margarita Engle
Dead Secret by Janice Frost
Steal Me by Lauren Layne
That Was Then... by Melody Carlson
The Superhero's Son (Book 1): The Superhero's Test by Flint, Lucas
El bueno, el feo y la bruja by Kim Harrison
All Over Creation by Ruth Ozeki
Our partner