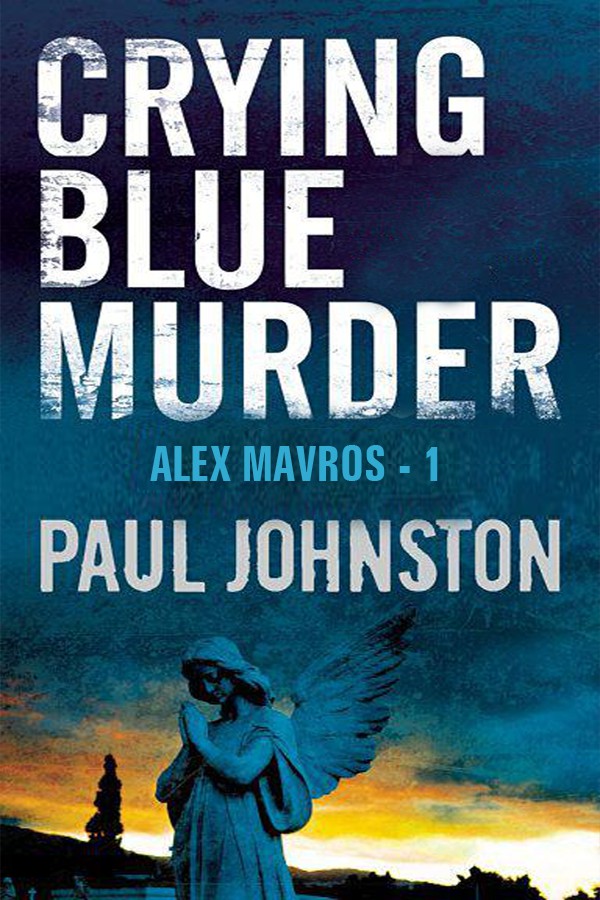 When Alex Mavros is asked to track down a missing woman, he jumps at the
chance to leave the stifling heat of Athens.

Travelling to the small
island of Trigono, he soon realises that there is more than one mystery
to be solved. How did a young couple drown in the nets of a fishing
boat? Why did a British journalist leave without telling her friends?
Why is the millionaire Theocharis so nervous and whose bones does old
Maro keep beneath her bed? The answers lie in events that took place
during the Second World War, events that tie in with the island's most
ancient history.

In a race to prevent a terrible crime being repeated,
Alex Mavros is pitted against a ruthless and depraved killer...

“A sensual portrait of modern Greece, as well as a
great page-turner…a rich and intelligent
story, with fascinating characters.”
Scotland on Sunday

“The very best crime novels are those in which
location, character and story combine in a
single, powerful whole… Paul Johnston stakes
his persuasive claim for a place in that pantheon.”
John Connolly

“A perfect setting for a tense thriller…this is an
intelligent and satisfying book, part
contemporary thriller, part the dark sister of
Captain
Corelli’s
Mandolin.”
Scotsman

“Clear your diary, take your phone off the hook and
ignore the doorbell… Once again, Johnston
provides evidence of his talent for spinning an
involving colourful yarn, while his love of the
setting, his many colourful characters and the
Greek culture is infectious.”
List

“A high-class thriller. Johnston’s plotting and
characterisation are adept. A novel to be enjoyed
by anyone who loves thrilling prose and
action-packed storylines.”
Good Book Guide

“Has a fine sense of place, a brooding atmosphere of
menace and a cast of exceedingly sinister characters.”
Birmingham Sunday Mercury

Paul Johnston
was born in Edinburgh, and educated there and at Oxford. He is the author of ten crime novels, the first of which,
Body Politic
, won the British Crime Writers’ Association John Creasey Memorial Dagger for Best First Novel. He also won the Sherlock Award for Best Detective Novel for
The Last Red Death
. He now spends much of his time in Greece. He is married to a Greek and has recently become a father for the third time.

Many thanks to MIRA UK for
republishing this novel.

My agent Broo Doherty of Wade & Doherty
has handled business and other matters with
her habitual skill.

The first thing to point out is that
Crying Blue
Murder
was originally published in 2002 under the title
A Deeper Shade of Blue
. if you bought the latter, please give this one to a friend rather than demanding a refund. I decided not to update the action, so don’t be surprised by the presence of the drachma instead of the euro.

The novel was the first in what is so far a trilogy featuring the half-Scots, half-Greek private investigator Alex Mavros. It stemmed largely from the six years I spent living on the small Aegean island of Antiparos. I’ve said in the past that I set the action on the non-existent island of Trigono because I was worried about irritating the natives of Antiparos by what is, it has to be said, hardly a complimentary take on life in the Cyclades. But the truth is, inventing an island freed up my imagination and allowed me to take certain often diabolical liberties. Which is not to say that the novel doesn’t reflect local life as regards violence. In 2008, a man on the nearby island of Santorini cut his wife’s head off and paraded it down the street. I would never dare to write anything as gross as that (though it’s a challenge…).

On the other hand, one of the inspirations for the book was a war memorial to Antiparos’s resistance heroes, which included a misspelled but recognisable British name. I was immediately fascinated and started researching. Suffice to say that the real life story, involving a soldier from the Pay Corps who wanted to be a spy, is substantially less romantic than the version I came up with. This is a love story, admittedly a pretty tragic one, as well as a crime novel.

Writing about holiday destinations such as the Greek islands has its challenges. How do you avoid clichés? I decided to subvert the common conception of beautiful islands dotted with white houses by stressing the darkness that lies beneath. Much of the darkness is located in that key Greek institution, the family. It’s a fact that the overwhelming majority of violent crime in Greece takes place within the family. In that respect,
Crying Blue Murder
is realistic. As, I hope, are the descriptions of the land- and seascapes that have inspired and continue to inspire poets and artists; as well as seekers of sun, sand and sex.

Readers should be aware of the following points of language:

1) Greek masculine names in –os, –is, and –as lose the final –s when individuals are addressed: ‘Panos, lefteris and Nondas are raising their glasses’, but ‘raise your glasses, Pano, lefteri and Nonda.’

O
UTSIDE
, the half-moon, tilted on its back, was rising low over the eastern islands, casting a shimmering path on the grey-blue sea. A light breeze was blowing over the ridge, and on it came the creak of cicadas and the clang of goat bells from the upper slopes. The drag of water over the fractured feet of the cliffs below was a regular pattern, as soft and insistent as a lullaby.

Inside, the woman choked back a scream and drew fetid air into her lungs. She closed her eyes and counted to ten, but the darkness was still there when she opened them again. She pulled hard against her bonds. The ropes on her wrists and ankles bit into the raw skin, making her gasp, but she persisted with the movements, trying to understand what was happening. Her mind was spongy, unfocused, and there was a dull buzzing in the background. Was she drunk? She jerked back and forward again, tears spurting as pain shot up her arms and legs. For a moment she thought she was going to be sick, but nothing came. Her throat was too dry and her stomach was empty.

Then she heard the voices. They were low and hard to distinguish, coming from some point in the outer darkness. She swallowed hard and tried to control her breathing. The voices seemed to be familiar. There were two of them, one lower than the other, but her wandering mind couldn’t locate the faces that went with the sounds. All she could tell was that the speakers were having a fevered discussion. Something told her that calling out to them wasn’t advisable. She raised her bound wrists to her face and touched the broken surface of one cheekbone. Had she already made a noise? Had they hit her? She felt her stomach turn over.

The voices in the darkness were less tense now, the argument apparently over. The woman moved her back against the wall—it was much rougher than the wall of a house—and realised with a spasm of shock that she was naked. There was gritty sand on the skin of her backside and she drew her tied wrists up over uncovered breasts. She started panting as the nature of her predicament overtook her like a tidal wave. And then a light came on.

It was bright, blinding and directed at her face. She tried to look away as it moved closer and felt another frisson of horror as she saw a loose assembly of bones in the far corner, plumes of skin and tattered tendons trailing away from it across the floor. Then the light was up close and a heavy hand took hold of her chin, forcing it up.

It was the laugh that broke her spirit, an explosion of inhumanity that the softer intonation of her other captor’s voice did nothing to dilute. Without resisting she allowed herself to be pushed forward, rough hands on her breasts and between her legs, until she was crouching on all fours, her eyes clouded by tears. The light was withdrawn and she caught a glimpse of a tripod, heard the hum of a video camera. Then she was caught by a driving agony. She had already sunk into the lowest depths of fear and desolation. The knowledge that a recording was being made of what she was enduring meant little to her.

It ended in a series of grunts. The woman was knocked against the wall and a heavy hand rained blows on her head and shoulders, as if she had failed the man who had assaulted her. The camera’s sibilant noise stopped and she opened her eyes. She saw boots, shoes, the tripod, but she kept her gaze away from the decaying body on her left.

And then, in the seconds before the light went out, a bottle thudded against her bare thigh, followed by a hunk of what smelled like bread in the sand by her face. The low voices faded and the woman stayed motionless. She understood that the screw had been tightened. She was not to be set free, she was not even to be slaughtered like a captive animal. She was to be kept in this stinking hole, she was to stay alive so that the bastards could continue violating and filming her whenever they wanted.

She tried to hold her breath until she passed out, tried to resist the temptation to open the bottle, but she soon gave in. She drank brackish, inert water and swallowed coarse bread. How long had she been here? When had she last eaten? She had no sense of time, no clear idea of where she was. A cellar? A deserted hut? A cave? In the distance she heard the sound of a vehicle start up and move off.

The enclosed space around her was sable, black as the most starless of nights, and she became aware of the flutter of scaly wings over her head. She wondered if they were bats, but whatever they were, the creatures didn’t frighten her. They were nothing compared with the realisation that had crept over her.

She had no idea who she was.