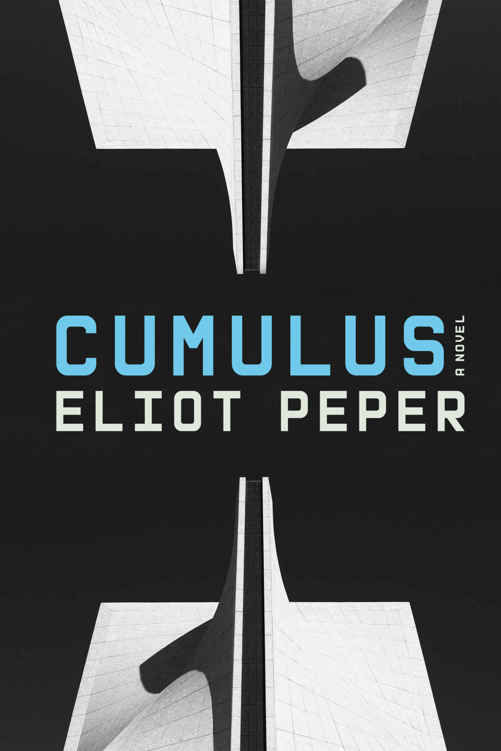 This is a work of fiction. Names, characters, places, and incidents are the product of the author’s imagination or are used fictitiously. Any resemblance to actual events, locales, or persons, living or dead, is entirely coincidental.

All rights reserved. No part of this publication may be reproduced, stored, or transmitted in any form or by any means, electronic, mechanical, photocopying, recording, scanning, or otherwise, without written permission from the publisher. It is illegal to copy this book, post it to a website, or distribute it by any other means without permission.

This book was designed by The Frontispiece, Inc. It was edited by Shannon Pallone and Jesse Vernon. The text face is Bembo Std; versals are set in Brandon Grotesque. The cover and interior also feature Cumulus Mono, designed specifically for this book by Kevin Barrett Kane.

GET THE INSIDE STORY

To get updates on my new books, reading recommendations, and behind-the-scenes details on creative process, join my author newsletter. This is the single best way to get or stay in touch with me. Emails are infrequent, personal, and substantive. I respond to every single note from folks on the mailing list. Sign up here:

To Oma, who risked everything to join
the Dutch Resistance and whose courage
helped our family and many others
survive World War II. She could dissect
your soul with a glance and made the
best boterkoeken.

THE FIRST RULE OF ESPIONAGE
was the one that the Agency never taught you. Most failed to figure it out, and focused all their energy on unraveling the labyrinthine intricacies of counterintelligence plots. But the savvy few who learned the lesson pulled strings well above their pay grade. The results spoke for themselves.

“It seems our friends have passed an important junction,” said Graham Chandler, settling back into the leather couch.

Flint Corvel fidgeted in his chair, chewing on the end of a pen. Psychology books lined the walls. A wide oak desk sat in one corner. Ferns sprouted from a large glazed ceramic pot. A circular plush carpet covered most of the floor. Through the windows, Graham could see a few pedestrians down on the peaceful Berkeley street.

“Dr. Corvel,” said Graham. “I didn’t come here just to talk to myself.”

Corvel’s cheek twitched. “I don’t know where you get your information.” He shook his head. “But yes, Vera called me earlier this morning. She and Huian’s fights haven’t abated. Vera’s very upset. She suspects Huian doesn’t take their problems seriously.”

Corvel winced and turned his head to stare out the window.

“Has Vera brought it up?” This time, Graham injected an undertone of authority.

Corvel sighed. “Not yet, but she will. Vera doesn’t think in straight lines like Huian, but when she sets her mind to something, she rarely gives it up.”

“Huian is a tough case,” he said. “Her personality is like carbon fiber. She’s light and strong and obviously a genius. But when force is applied from the wrong direction, her emotional framework turns brittle. It’s common among people who spend their entire lives putting immense stress on themselves. It’s a psychological pressure cooker.”

“You need to ensure that Vera goes through with it.”

“Then you better start figuring out how to. It’s time to overload that pressure cooker. I need Huian off balance.”

“Jesus.” Corvel looked down at his hands. He took a few shuddering breaths. “Look, it’s one thing to give you confidential patient information. But you’re asking me to use my privileged information and position to intentionally manipulate patients.” His teeth were chattering even though the office was comfortably warm. “I just… can’t. I just can’t.”

Amateurs. People unused to duress just didn’t know how to handle it. It was like football. The first time you got tackled, it felt like the end of the world. But after running a few drills you learned how to take a hit.

“Dr. Corvel,” said Graham, crossing his legs. “I understand your concern about betraying what you see as your professional code of ethics. But I suggest you likewise consider the professional and personal implications of the wider world discovering your substantial collection of child pornography. It would be ever so unfortunate, wouldn’t you say? I can imagine all the nasty clickbait headlines already.”

“But I told you, that was planted—”

“While I understand the possibility of data manipulation,” said Graham, “I doubt that many members of the press, or even law enforcement, have the necessary technical acumen to evaluate the validity of your hypothetical defense. In confidence, of course, we can discuss it reasonably. But I would imagine that your family, clients, and colleagues might not react quite as rationally.”

“I’ve always found it reassuring that the nature of the afterlife remains ambiguous despite the ongoing efforts of religious and scientific scholars.”

Corvel looked up at him, eyes vacant.

As Graham stood, a shaft of afternoon sunlight illuminated the leaves of the potted fern at just the right angle to catapult him back into the dappled green of a Malaysian jungle. He had shadowed the principals to a lodge hidden deep in the rainforest along the Kinabatangan River. But immediately after he painted the building with laser targeting, a barefoot boy skipped out of the front, a pair of battered binoculars dangling around his neck. Nikon EDG 8×32. The binoculars were precisely the same brand and model as the favorite pair Graham himself had received from Granddad on his seventh birthday. When the boy raised them to peer at a distant bird, Graham saw himself standing there.

Graham had continued to watch, paralyzed, as the drone strike immolated the boy and the building. The tableau seared into his subconscious like a brand. Even if death was your profession, it could still blindside you. He adjusted his shirt, and reeled himself back to the present. These were precisely the kinds of thoughts that Corvel had spent his career trying to excavate.

“Thank you for your time, Dr. Corvel,” he said. “We all make sacrifices in life. Consider yourself lucky that you get to choose the nature of yours.”

The first rule of espionage was to find leverage over your boss.

“DO YOU UNDERSTAND WHY WE’RE HERE?”

Huian Li spun the worn basketball on her fingertip, savoring the smell of old leather.

“Ma’am?” Richard Huntman looked up at her uncertainly across her desk. Confusion was not a flattering expression on his craggy-but-handsome face. He fiddled with his pant leg, creasing his perfectly tailored Italian suit.

Huian turned away in disgust, the ball still spinning. She gazed through the glass wall, over the tops of the redwood and oak trees of the Presidio, across Crissy Field, and out onto a blue-gray San Francisco Bay. Sailboats, tiny at this distance, skittered across a surface ruffled by gusts of wind. Seagulls wheeled high over the marina. Alcatraz sat in the middle distance, a forbidding reminder of human transgression.

“Look, I know this is a setback,” he said. “I wasn’t expecting them to pull out at the last minute. I mean, the term sheet was signed. Everything was in order.” Richard’s voice gained momentum, his words stoking his confidence. “They’ll be back. No question. Sanchez will be back here in six months begging for terms half as good. That’s why we decided to tack on the extra provisions after the term sheet. It was too rich a deal. They should have come down, and now they’re going to back themselves into a corner.”

Huian whirled back to face him. As she turned, she caught the basketball with her palm and used her momentum to slam it into the center of her desk. She held it perfectly in place, knuckles white and fingers splayed across the sections of leather. Richard jerked back, and the legs of his chair skipped back across the floor just like the sailboats out on the bay. The sound of the impact reverberated through the cathedral of her office. She waited for the echoes to die. Richard’s eyes widened, and he bit his lip before forcing his expression back to blank.

“Do you understand why we’re here?” She pitched her voice to carry, and emphasized every word.

This time, he didn’t respond. He just stared up at her. She could see the cogs starting to work behind his carefully neutral eyes. He was smart. He saw the 18-wheeler bearing down on him. It was so hard to find people of conviction, people who understood the magnitude of the responsibility resting on their shoulders.

“This isn’t a game.” This time, her voice was low enough that Richard had to strain to hear. “This isn’t some petty money grab. This isn’t just another company.” She spread her arms wide and raised her eyebrows. “This is Cumulus. We are building
the future.
”

She leaned across the desk and narrowed her eyes. “The future is a demanding mistress. She has no patience for incompetence. And she certainly won’t abide a senior vice president of corporate development who lets an important acquisition fall apart right before the quarterly investor call.”

She fell back into her chair. “Tom?”

“Please have Security clear out Richard’s office,” she said. “He’ll see himself out.”

Muscles worked in Richard’s jaw. “So this is how you want to play this.” His voice brimmed with suppressed fury.

“This is the last way I want to play this,” she said, cocking her head to the side. “I wanted you to do your job. You chose not to. It can’t get much simpler than that.”

Richard stood abruptly. His eyes were chips of granite. “Fuck you, bitch.”

“Oh, come now,” she said. “A man like you always has a contingency plan. I’m sure you’ve been grooming yourself for roles in a half dozen other companies already. I’m sure one of them will provide a much better…fit.”

“Fuck you,” he said again, turning and making his way to the door.

She stared at his retreating back in silence as he stalked away. His footsteps beat out a counterpoint to her frustration. He tried to slam the door behind him, but the mechanism slowed the close to a soft click. Contingency plans. Maybe that had been Richard’s problem. Even the act of making such plans required less-than-total commitment to the primary objective.