Curse of the Fae King 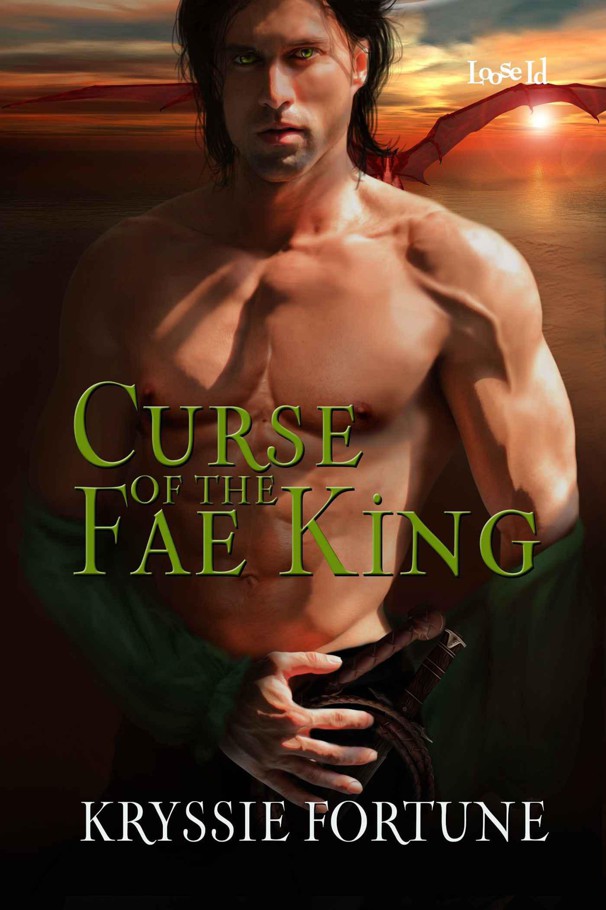 CURSE OF THE FAE KING

This one’s for you, Helen.

Thank you for the unstinting support. I couldn’t have a better daughter. Also, a special “I love you” to my husband, Alan. Thank you for putting up with my hours tapping away at a computer keyboard.

“That’s my bloody dragon!” The Fae stalked across the cliff top, his emerald shirt billowing beneath his black leather waistcoat. “And I will be having him back.”

Meena’s curls tumbled over her shoulders, an ebony waterfall streaked with rainbow colors. She’d come up to the abbey ruins for solitude and peace, and as usual, she’d found it. Unless you counted the little lost dragonet at her feet. A large dog would have dwarfed him, but he was definitely the cutest otherworld creature she’d ever seen. And now his owner wanted him back.

She glanced back toward the main entrance to see who’d provoked the Fae’s fury. There wasn’t another soul to be seen, which meant…

Sweet Hekate. He’s yelling at me.

Okay, her life was… Well, it wasn’t good, but no one snarled at her like that. Meena clenched her fists and squared her shoulders while the dragonet rested his head on his paws and took another bite of her sandwich.

The Fae’s arrogance chafed, but she refused to take her anger out on the dragonet. The way he mewled and flopped down at feet made her smile.

Meena removed her gloves and fondled his pointy ears. “Cheer up, Lipstick. Daddy’s finally come to take you home. What a pity he didn’t take better care of you in the first place.”

“Lipstick?” Leonidas thundered. "You named a powerful war dragon Lipstick. He should bear a noble name like Dreadnought or Valiant.”

With his uptight expression, corded muscle, and stiff spine, he had to be Fae royalty. That didn’t bode well for an outcast like her.

Meena smiled her professional customer-service smile—the one that had let her down earlier. “But he's the same color as my new lipstick. Scarlet Kisses, see?”

She brandished it like a talisman. She expected smoke to come out of this overbearing Fae’s ears. How satisfying was that? Whenever Fae passed through Whitby, they dissed her completely—but that wasn’t always a bad thing. Eight years ago when her powers didn’t manifest at puberty, the Witch Council put a price on her head. Her mother moved them to the mundane world, but it had taken Meena forever to adjust to life in Whitby. A life without magic.

Despite his bad temper, the Fae’s sculptured cheekbones and kissable lips made a dangerous combination—one she struggled to resist. His voice flowed over her like melted chocolate. She loved how he’d braided his hair back in a neat queue at the nape of his neck, and now he stood like a Spanish hidalgo—all uptilted chin, disdainful pride, and gleaming white fangs. Only how dare he look down his nose at her? Carved of granite and steel, he radiated menace. Definitely not as cute as his dragon. More mouthwateringly masculine, but otherworld creatures usually dissed a reject like her.

She stared at the bullwhip coiled Indiana Jones-style at his narrow waist, then at the black-handled dagger sheathed on his right hip. An obsidian rapier—Fae-forged and unbreakable—almost merged with one of the taped seams that ran down the sides of his pants. He even wore a dagger gunslinger-style at his hip. Dear Goddess, the man was a walking arsenal, but he was sexy as hell.

This Fae warrior was battle honed and ready. When the wind whipped his shirtsleeves against his biceps, Meena barely stopped herself from licking her lips or, better yet, his. When she imagined his arm curled around her waist—dominant, possessive yet protective—her pussy clenched with desire.

Otherworld species—the Witches, Vampires, Lykae, and Fae—used Whitby the way aircraft passengers do a transport hub. Sometimes she wanted to scream, “I’m here. Talk to me.” Deep down, she knew better than to draw attention to an outcast like herself. Humans never noticed their comings and goings, but she saw every one of them, silent reminders of everything she’d lost. Life without her Witch friends or her magic was hard. Living in Whitby was difficult enough, then just a couple of hours ago, life kicked her in the pants again.

The abbey ruins dominated the picturesque harbor town, and ever since she’d arrived in the mundane world, she’d found peace among its ancient stones. Until today. Damn it, she wouldn’t let some high and mighty Fae spoil her refuge, no matter how loud he shouted.

His lips narrowed into a stern, kissable line, and his voice dripped deadly menace. “Woman, you will give me back my dragon.”

“Okay, jackass, enough. I’m having a really bad day here,” Meena snapped. “And to top it off, your dragonet just polished off my lunch.”

“You bloody fed him? Elves’ blood, don’t you know they bond with whoever first feeds them? You’ve poached my damn dragon.” He seethed with fury and frustration along with the sort of take-charge sexiness that could make a girl weak. Make her crave all the things her exile denied her—and that definitely included sex.

Fangs bared, he marched toward her. His don’t-fuck-with-me confidence made her mouth water, but provoking him might prove…fatal.

Meena’s courage almost deserted her, but she stood her ground. “Someone had to take care of him, especially since you didn’t. And don’t you dare glower at me like that. Hello? Already stressed out here, so why don’t you flash off back to Fairyland?”

He went quiet and still, so mean and moody he made her heart race. “No one”—he took the arrogant bad-boy vibe up a gear—“speaks to me with such disrespect. I am Leonidas, and that is my dragon.”

“Get over yourself, and go annoy someone else.” She smirked in his face.

His expression frozen in haughty grandeur, he rested his hand on his rapier’s hilt. His curled lip and narrow-eyed glower said he’d happily run her through with his blade. Then when he truly looked at her, his eyes glinted like emerald stars, and magic swirled around him in waves. Tiny lightning flashes zigzagged around him in a full-body halo that even a witchy reject like her could see.

His voice turned deep and sensual—an earthy rumble that made her pussy pulse with need. “A man would die for speaking to me like that, but it would be a shame to rob the world of a beauty like yours.”

What do you know? The warrior’s a poet
. That was the prettiest compliment she’d ever received. Come to think of it, it was the only compliment she’d received since she’d fled the otherworld.
That’s it, rub it in that I’m lonely
. He oozed Latino charm just like Antonio Banderas when he played Zorro.
Indiana Jones? Zorro? What is this? Hollywood’s Sexiest Men?

Thunderbolts rumbled around him, and the lightning flashes turned electric blue. He was danger and fury, a mountain of sensual hunger—as proven by the tempting bulge in his tight leather pants. Then he closed his eyes, shuddered, and extinguished the storm cloud of desire he’d just invoked. Tight leather trousers weren’t designed to hide a hard-on, especially not one that size.
Only what’s with the light show? Come on, Fairy king, give me a clue.

Without sparing her another glance, he reached into his belt pouch and tossed the dragonet a slice of raw meat. “Eat up, boy; then I’ll take you home.”

Full from Meena’s cheese sandwich, the dragonet growled softly and turned away. Leonidas’s clenched jaw and raised eyebrow made Meena smirk again. His face was too harsh to be handsome—all angular planes and aquiline nose—but despite his atrocious manners, she didn’t want him to leave. Her cheeks heated when his green-eyed gaze swept over her, and again his lip curled. “You’re not human. You’re too slender in places and too curvy in others. What species are you?”

Too thin? Too curvy? Come on, jackass, make up your mind.

So much for the compliments—and did he just call her overweight? She wasn’t skinny, just sort of middling and normal, unless she gorged herself on chocolate. Okay, she watched her figure, but then what woman didn’t? Maybe she packed a few extra pounds, not that she’d admit it to this aren’t-I-just-perfect Fae.

Determined to give as good as she got, she smirked again. “Perhaps I’d be fatter if Lipstick here hadn’t scoffed my lunch. And for your information, I’m Goth.”

He raised a questioning eyebrow.

How insular could one Fae be? Meena rolled her eyes and smiled just wide enough to show her tiny fangs. “You’re standing in the Mecca of British Gothdom. Whitby Abbey? The place that inspired Bram Stoker? Spiritual home of Dracula? I’m a Vampire wannabe, supposedly. The New Age shop that just fired me wanted me to dress the part, so here I am, all swirling woolen cape, bloodred lips, and dark brows.”

“Vampires thrive on war and bloodshed, and with every year their king is missing, their bloodlust gets worse. They are the deadliest, most despised of species, and you are soft and curvy in all the right places, but you look like you’d break in battle. And who is this Bram Stoker? Is he the one who spoiled your day?”

Wow! Was that another compliment buried beneath all that disdain? I could definitely get used to this.

The Mysterious Howling by Maryrose Wood
A Distant Summer by Karen Toller Whittenburg
The City Jungle by Felix Salten
On Mother Brown's Doorstep by Mary Jane Staples
Emergency: Parents Needed by Jessica Matthews
Immortal Beloved by Cate Tiernan
In the Arms of a King (My Warrior Lover) by Divine, Daniella
Reckless (Free Preview) by Cornelia Funke
A Shiver of Wonder by Daniel Kelley
Living with the Dead by Kelley Armstrong
Our partner