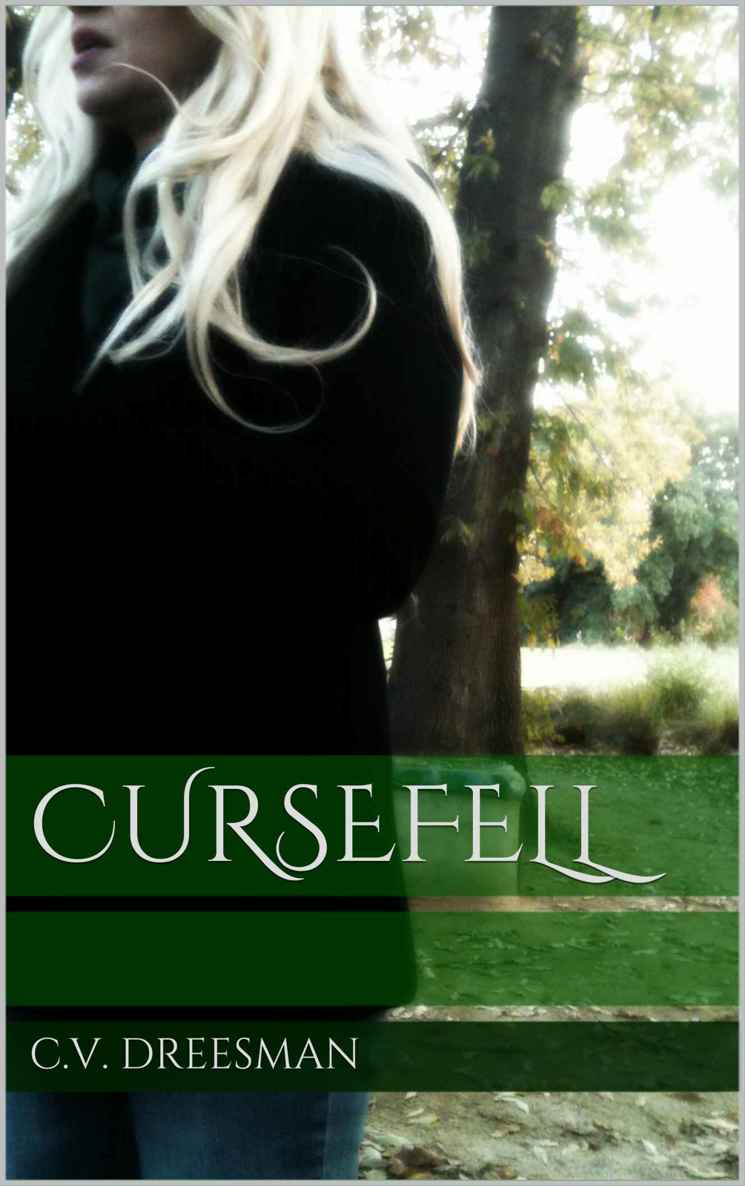 Copyright © 2014 C.V. Dreesman
All Rights Reserved
This book or any portion thereof may not be reproduced or used in any manner without the express written permission of the author or publisher except for the use in articles or reviews.  This is a work of fiction.  All names, characters, and events are products of the author’s imagination or used in a fictitious manner.  Any resemblance to actual persons, living or dead, actual events, or locations is purely coincidental.

"Sweetie."
The voice fell in the whisper of summer promise.  The word was a ray of gleaming flame.  I knew who had spoken even before my eyes fluttered open to take in the face.  It was the speaker I had longed to see again.  My heart twitched with the knowledge.
"Hi, Dad."
My father stood beside me, both of us facing the horizon as the sun set behind red rocked cliffs across the deep chasm gaping a few steps beyond our feet.  In profile he had not changed.  The same deep etched lines were drawn along the corners of his mouth, almost reaching his cheek.  The crows feet still crinkled the skin beside his eye.  Even the hair was, as it had always been, cropped short and severe in opposition to the face.  It was a face I had not seen for a year except in our family albums.  A face I had not touched since he had been taken from me in a hit and run accident.
So gently that I barely noticed, my father laid an arm across my shoulders, comforting and reassuring.  He pulled me close, embracing me like he used to do when I was a little girl and scared of the dark closet.  Or the first day at a new school.  Or clowns.
"Still afraid of clowns, huh?"
I pushed at him, not hard, just in mock indignation.
"No," I told him.  We laughed, both of us knowing I was lying.  "Can you read minds now?"
"More like sensing a thought or strong emotion.  It is like a flicker of a picture.  A screenshot I guess you would call it."
"It wasn't your fault they said.  The accident, I mean.  But if I ever find the guy who hit you..." I was chocking back angry tears, gripping that old plaid shirt in a tight fist.  "Whoever it was..."
"You run as fast and as far as you can from them.  Do not do anything else.  You run.  Got it?"
I didn't get it.  Why would I run away from my father's killer?  How could I do that?  I wouldn't.  My father might not know it, but I did.  The words had been said by me before and I reiterated them in my head again.  I swore it to myself.  Somehow that vow hardened my heart.  It sat there in my chest, a physical weight that I could literally feel, a heavy stone I gladly bore.
"No honey.  No..." His words all soft sorrow.  They cut me deeper than anything I had ever known.  Damn.  I promised myself I wouldn't shed another tear ever since that awful day.  My mother was my example.  Now I couldn't hold them back as I rested my head against my father's shoulder.
"Shh now.  Listen.  Your mother was right.  I did not see it before, but now I do.  She was right to take you away.  So listen to her, okay?  I thought I could protect you, but I'm not there now.  She is.  She will protect you from whatever is to come."
"What does that mean?  Diana just runs from things, Dad." He glanced sharply at me, that rare flash of anger behind grey eyes.  "Okay.  Mom.  She can't face the facts.  She hides from reality."
"Maybe reality is not what you believe it to be, honey."
What did that mean?  What was he talking about?  But looking back to the setting sun that hadn't set yet, that hadn't even moved, I thought I understood.
"What does it matter now?  I'm dead.  Just like you."
"Dead?  No, you aren't dead," he chuckled.
"Then how are we here, together?" I asked him.
"This is the Wylde, the realm of sun and shadow.  The great between world.  I always thought it was a fable, but it is true," looking at me with those kind eyes full of parental caring, that look I had so yearned to see again, my father added,  "You brought me here.  Your love, pained as it is, compelled me this hour.  At least I think that is the reason we are together now."
Before I could ask the questions his words gave rise to, the sound of tumbling boulders falling from some distant height spun us both around.  My father put a protective arm in front of me.  His hand darted inside the leather jacket he wore.  It was the same jacket he was wearing when he had died.  All faded black and peeling at the collar from years of sun and oil.  It smelled of him, I realized, and choked back another tearful round that would have been epic in its intensity.
When all that we saw was that red and broken land, even as sounds from falling rocks and sliding pebbles continued, my father turned back to look at me.  Odd that the clothes he wore were the same ones he had worn that final day, but not a scratch showed on him except for the blooming dark liquid petal seeped across his chest.
"Dad?  What is that?" I asked, pointing an accusatory finger at the stain.
He didn't look down, didn't even act surprised.
"I am sorry we lied to you.  I'm sorry I hid the truth," he spoke, leaning forward to rest those hands that had been so strong in life gently upon my shoulders.  His eyes were wide with pleading.  He wanted forgiveness for something I didn't understand.  That, without knowing, I didn't know how to give.
"I've missed you, sweetie."
"I miss you, Dad."
"Open your eyes, honey," he told me, not making sense.  My eyes were open.  "Look beyond the shielded truth to find the answers you will need."
He shoved me.  Hard.  My arms windmilled as I stumbled over the lip of the canyon gorge.  The world dropped away as I fell into the lightless chasm, screaming for the father who was leaving me again.

The ocean roiled and spit itself out in a geyser of burning froth.  At least it felt that way to me as the salty water was discharged from my burning lungs.  I was dimly aware that someone's hand pumped against the cold knit sweater chilling my chest and the awful gasping cough that followed.  Ungentle hands rolled my drowned form onto my side.  A softer touch stroked over the wet hair plastered to my head.  Both were comforting in their own way.  Both told me I had survived.
Students stood ringed around me wearing expression ranging from fear to shock to excitement for those few who recorded the sight with their smart phones.  Voices were saying something very close to my ear, but they were all a garble.  Just beyond the group, his back pressed against the hull, sat the boy who had saved my life.
Forgotten now that the question of my survival had an answer, a deckhand had at least given him a towel from the ship's stores that he was using to vigorously dry his coppery head.  He noticed that I was looking and our gazes locked together.  His eyes were mesmerizing.  They drew me in with their hints at something mysterious, a thing I could not wholly read.  Was it concern or scolding?  Maybe.  But maybe something else too.
Another cough wracked my body, breaking my eyes away.  It was like being wrenched from watching an accident or being pushed apart by my father.
When I got the coughing under control I found him looking now with obvious concern.  An angry red scratch was raked across his chest.  Another jagged wound ran down his shoulder and was trickling blood.  Neither seemed too serious, but both would leave a scar.  I returned his look as best I could until Walt stuck his face in front of mine.
"Hey.  Are you okay?"
I nodded.  Lily leaned down to kiss the top of my wet crown between her stroking touch through my hair.  She was a good friend, one of the few I had made over the past year.  Others came up to slap Walt on the back in a congratulatory matter.  Why him, I wondered, a bit indignant.  His mom was a nurse after all, so of course he would know what to do.  But I was the one who had nearly died.  Some of those thoughts were, I was sure, coming from the fact that our relationship, if you could call it that, had recently ended.  I thought I had move on, but maybe I hadn't.
Sneaking another peek around Walt's beaming face, I saw the Irish boy grinning at me.  I tried to grin back before stopping short as I felt post drowning sea water drool leaking from the corners of my mouth.  It must have been there all along.  He wasn't grinning at me.  He was laughing.  Too weak to wipe it away and glare at him I had a decision to make.
I settled for the glare.

Tomorrow 7 - The Other Side Of Dawn by John Marsden
The Ghost of Hannah Mendes by Naomi Ragen
Dancing In a Jar by Poynter Adele
Ramage And The Drum Beat by Pope, Dudley
Distraction by Tess Oliver
The Angels of Lovely Lane by Nadine Dorries
The Other Side of Someday by T. K. Leigh
The Willow Tree: A Novel by Hubert Selby
Disobeying the Marshal by Lauri Robinson
Dream of Me: Book 1 The Dream Makers Series by Quinn Loftis
Our partner