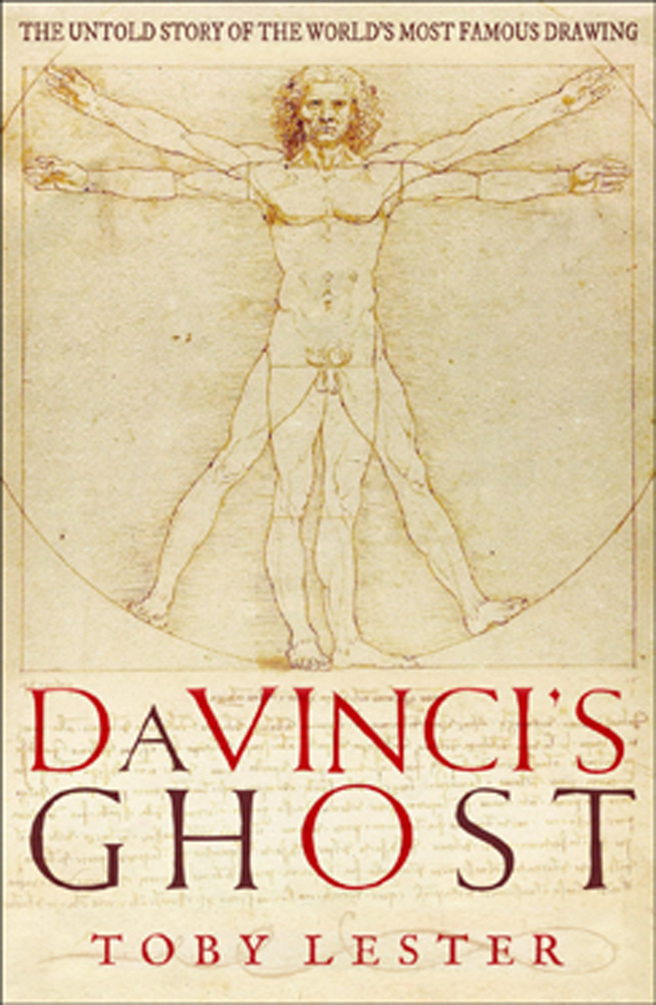 ‘Every once in a while that rare book comes along that is not only wonderfully written and utterly compelling but also alters the way you perceive the world. Toby Lester’s
Da Vinci’s Ghost
is such a book. Like a detective, Lester uncovers the secrets of an iconic drawing and pieces together a magisterial history of art and ideas and beauty.’ David Grann, author of
The Lost City of Z

‘In reconstructing the forgotten story of Vitruvian Man, Toby Lester, a canny decoder of images and a great storyteller, sheds new light on the enigmatic Leonardo Da Vinci.’ Chris Anderson, author of
The Long Tail
and
Free

‘Like Da Vinci’s famous drawing, Toby Lester’s book is a small wonder—a work of brilliant compression that illuminates a whole world of life and thought. Lester proves himself to be the perfect guide to the Renaissance and beyond—affable, knowledgeable, funny. Leonardo’s Vitruvian Man turns out to be a road map that can take us to remarkable places—once you learn how to read it.’ Cullen Murphy,
Vanity Fair

‘One of the great contributions of books like this is to keep the reader from taking a familiar object for granted. Lester’s detective story has a satisfying number of insights … covers a broad swath of history … [and] braids intellectual threads—philosophy, anatomy, architecture, and art—together in a way that reaffirms not only Leonardo’s genius but also re-establishes the significance of historical context in understanding great works of art.’
Publishers Weekly

The Fourth Part of the World

The Untold Story of the World’s Most Famous Drawing

First published in Great Britain in 2011 by
PROFILE BOOKS LTD

First published in the United States of America in 2011 by
Free Press, a division of Simon and Schuster, Inc.

Printed and bound in Great Britain by
Clays, Bungay, Suffolk

All rights reserved. Without limiting the rights under copyright reserved above, no part of this publication may be reproduced, stored or introduced into a retrieval system, or transmitted, in any form or by any means (electronic, mechanical, photocopying, recording or otherwise), without the prior written permission of both the copyright owner and the publisher of this book.

The paper this book is printed on is certified by the © 1996 Forest Stewardship Council A.C. (FSC). It is ancient-forest friendly. The printer holds FSC chain of custody SGS-COC-2061

8: Portrait of the Artist

T
HIS IS THE
story of the world’s most famous drawing: Leonardo da Vinci’s man in a circle and a square.

Art historians call it Vitruvian Man, because it’s based on a description of human proportions written some two thousand years ago by the Roman architect Vitruvius. But not everybody knows that name. When I mention it to people, they often react with a blank stare—until I start to describe the picture. Then, invariably, their eyes light up with the spark of recognition. “Wait,” one person said to me, “the guy doing naked jumping jacks?”

Call it whatever you like, but you know the picture. It’s everywhere, deployed variously to celebrate all sorts of ideas: the grandeur of art, the nature of well-being, the power of geometry and mathematics, the ideals of the Renaissance, the beauty of the human body, the creative potential of the human mind, the universality of the human spirit, and more. It figures prominently in the symbology of
The Da Vinci Code
and has been spoofed gloriously on
The Simpsons.
It shows up
on coffee cups and T-shirts, on book covers and billboards, in movies and online, on corporate and scientific logos, on international spacecraft. It even appears on the Italian one-euro coin, guaranteeing that each day millions of people will hold it in their hands. In short, it’s a worldwide icon of undeniable reach and appeal—but almost nobody knows its story.

I first began to get interested in that story while at work on my previous book,
The Fourth Part of the World
(2009), which tells the story of the remarkable map that in 1507 gave America its name. In writing that book I delved deep into the weird and wonderful world of early maps, geographical ideas, and visions of the cosmos—and one day I stumbled across a medieval world map that immediately grabbed my attention. What struck me about it was what strikes everybody when they first see it: its uncanny resemblance to Vitruvian Man (
Figure 1
).

The more I studied medieval manuscripts, the more I came across similar images—in maps of the world, diagrams of the cosmos, guides to the constellations, astrological charts, medical illustrations, and more. Leonardo, I began to realize, hadn’t conjured up Vitruvian Man out of the blue. The figure had a long line of predecessors.

I discussed Vitruvian Man briefly in
The Fourth Part of the World,
in the context of medieval and Renaissance mapping. The picture occupied only a peripheral place in the story I was telling, and soon I had to leave it behind. But as I moved forward I found myself glancing back in my mental rearview mirror at the receding form of Vitruvian Man. What else might be embedded in that picture? What forgotten worlds might it contain? What sort of a window on Leonardo
and his times might it provide? Why had nobody ever tried to tell the picture’s story? Soon enough I was hooked, and the result, some two years later, was this book.

Figure 1.
The Lambeth Palace world map (c. 1300). Inscribed in a circle and a square, Christ embodies and embraces the world.

O
N THE SURFACE
, the story seems straightforward enough. Writing at the dawn of the Roman imperial age, Vitruvius proposed that a man can be made to fit inside a circle and a square, and some fifteen hundred years later Leonardo gave that idea memorable visual form. But there’s much more to the story than that. Vitruvius had described his figure in an architectural context,
insisting that the proportions of sacred temples should conform to the proportions of the ideal human body—the design of which, he believed, conformed to the hidden geometry of the universe. Hence the importance of the circle and the square. Ancient philosophers, mathematicians, and mystics had long invested those two shapes with special symbolic powers. The circle represented the cosmic and the divine; the square represented the earthly and the secular. Anybody proposing that a man could be made to fit inside both shapes was therefore making an age-old metaphysical statement. The human body wasn’t just designed according to the principles that governed the world. It
was
the world, in miniature.

To an almost astonishing degree, this idea, known as the theory of the microcosm, was the engine that had powered European religious, scientific, and artistic thought for centuries, and in the late fifteenth century Leonardo hitched himself to it in no uncertain terms. If the design of the human body really did reflect that of the cosmos, he reasoned, then by studying it more carefully than had ever been done before—by using his unparalleled powers of observation to peer deep into his own nature—he might expand the scope of his art to include the broadest of metaphysical horizons. By examining himself in minute detail, he might see and understand the world as a whole.

Vitruvian Man sums up that dream in powerful visual form. At a superficial level, the picture is simply a study of individual proportions. But it’s also something far more subtle and complex. It’s a profound act of philosophical speculation. It’s an idealized self-portrait in which Leonardo, stripped down to his essence, takes his own measure, and in doing so embodies a
timeless human hope: that we just might have the power of mind to figure out how we fit into the grand scheme of things.

T
HE STORY OF
Vitruvian Man is actually two stories: one individual and one collective. The individual story, of course, is Leonardo’s own. Set in the years immediately leading up to 1490, it’s the story, as best I’ve been able to reconstruct it, of how Leonardo came to draw his famous picture—and it’s a surprisingly unfamiliar tale. Like Vitruvian Man, Leonardo himself has become such a popular icon, deployed for so many different purposes, that he’s rarely encountered as an actual person. Instead, he’s almost entirely a creature of myth: a prophetic, maguslike figure invested with almost superhuman traits who completely transcended his age. As one modern historian has put it, echoing the words of countless others, “
Leonardo, the complete man
of the Renaissance, paces forth, as far removed from medieval man as imagination can conceive.” But that’s not the figure you’ll encounter in this book. The Leonardo who drew Vitruvian Man turns out to be every bit as medieval and derivative as he is modern and visionary—and he’s all the more complex, fascinating, and mysterious for that.

The Defiance (Brilliant Darkness) by A.G. Henley
Room for You by Beth Ehemann
The Search For A Cure by C. Chase Harwood
Uneasy Relations by Aaron Elkins
Rondo Allegro by Sherwood Smith
A Man Above Reproach by Evelyn Pryce
The Game Player by Rafael Yglesias
Love Lost by DeSouza, Maria
Grave Undertaking by Mark de Castrique
Goodness and Light by Patty Blount
Our partner