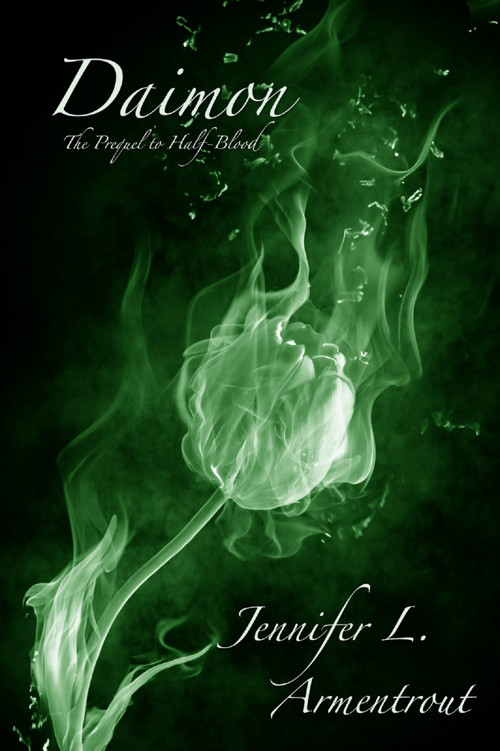 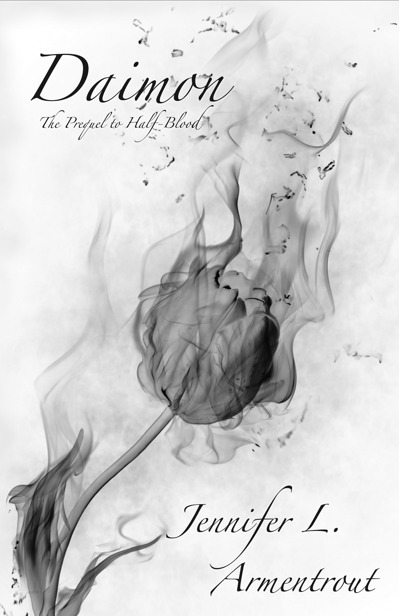 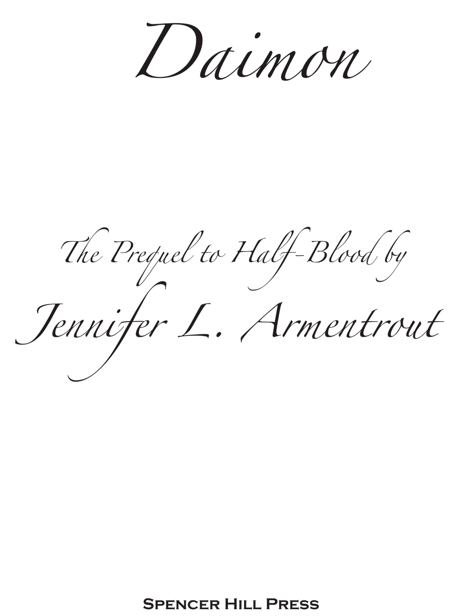 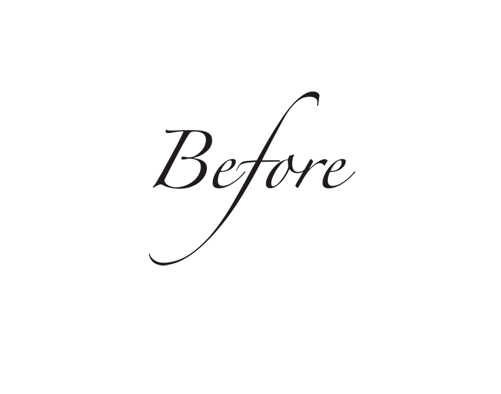 The elderly Hematoi Minister facing me looked like she had just crawled out of the tomb she’d been stored in for a couple hundred years.

Her skin was wrinkled and thin, like old parchment, and each breath she took I swore would be her last. I hadn’t ever seen anyone that old, but of course I’d only been seven and even the pizza guy had seemed ancient to me.

The crowd murmured its disapproval behind me; I’d forgotten that simple half-bloods like me weren’t supposed to look a Minister in the eye. Being the pure-blood spawn of demigods, the Hematoi had huge egos.

I looked at my mother, who stood beside me on the raised dais. She was one of the Hematoi, but she wasn’t anything like them. Her green eyes flashed a pleading look to cooperate, to not be the incorrigible and disobedient little girl she knew I could be.

I didn’t know why she was so frightened; I was the one facing the crypt keeper. And if I survived this poor excuse for tradition without ending up carrying this hag’s bedpan for the rest of my life, it would be a miracle worthy of the gods that supposedly were watching over all of us.

“Alexandria Andros?” The Minister’s voice sounded like sandpaper over rough wood. She clucked her tongue. “She is far too small. Her arms are as thin as the shoots of new olive branches.” She bent over to study me more closely, and I half expected her to fall in my face. “And her eyes, they are the color of dirt, hardly remarkable. She barely has any blood of the Hematoi in her. She is more mortal than any we have seen this day.”

The Minister’s eyes were the color of the sky before a violent storm.

They were a mixture of purple and blue, a sign of her heritage. All the Hematoi had startling eye colors. Most of the half-bloods did too, but for some reason I’d missed the whole cool eye color boat when I’d been born.

The statements had continued on for what seemed like forever to me and all I could think about was ice cream and maybe taking a nap.

Other Ministers had come down to check me over, whispering to each other as they circled me. I kept glancing at my mother and she’d smile reassuringly, letting me know that all of this was normal and that I was doing okay—great, even.

That was, until the old lady started pinching every piece of my exposed skin and then some. I’d always had this thing about being touched. If I didn’t touch someone then I believed they shouldn’t touch me. Grandma had apparently missed that memo.

She’d reached out and pinched my belly through my dress with her bony fingers. “She has no meat on her. How can we expect her to fight and defend us? She is not worthy to train at the Covenant and serve beside the children of the gods.”

I’d never seen a god, but my mom told me there were always among us, always watching. I’d also never seen a pegasus or a chimera, but she’d sworn they also existed. Even at seven I’d had a hard time believing the stories; it had strained my fledgling faith to accept that the gods still cared about the world they had so diligently populated with their children in a way only the gods could.

“She’s nothing more than a pathetic, little half-blood,” the ancient woman had continued. “I say send her to the Masters. I’m in need of a little girl to clean my toilets.”

Then she had twisted her fingers cruelly.

And I had kicked her shin.

I’d never forget the look on my mother’s face, like she’d been caught between terror and full-blown panic, ready to run between them and snatch me away. There were a few gasps of outrage, but there were also a few deep chuckles.

“She has fire,” one of the male Ministers had said. Another stepped forward, “She will do fine as a Guard, maybe even a Sentinel.”

To this day I had no idea how I’d proved my worthiness after kicking the Minister in the leg. But I had. Not that it meant a damn thing now that I was seventeen and had been nowhere near the Hematoi world for the last three years. Even in the normal world I hadn’t stopped doing stupid things.

Actually, I was prone to random acts of stupidity. I considered it to be one of my talents.

“You’re doing it again, Alex.” Matt’s hand tightened around mine.

I blinked slowly, bringing his face into focus. “Doing what?”

“You got this look on your face.” He tugged me against his chest, snaking an arm around my waist. “It’s like you’re thinking about something universally deep. Like your head is a thousand miles away, somewhere up in the clouds, on a different planet or something.”

Matt Richardson wanted to join Greenpeace and save some whales.

He was the pretty boy next door who’d sworn off eating red meat.

Whatever. He was my current attempt to blend with the mortals, and he’d convinced me to sneak out and go to a bonfire on the beach with a bunch of people I barely knew.

I had bad taste in boys.

Previously, I’d crushed on a brooding academic who’d written poems on the back of his school books and styled his dyed, jet black hair so it’d covered his hazel eyes. He’d written a song about me. I’d laughed, and that relationship had been over before it got started. The year before that was probably my most embarrassing—the bleached blond, JV football captain with sky blue eyes. Months had gone by with us barely exchanging a “hey” and “do you have a pencil?” before we’d finally met up at a party. We’d talked. He’d kissed me and mauled my boobs, all the while smelling like cheap beer. I’d punched him and broken his jaw. Mom had moved me to a different
town
after that and lectured me about not hitting as hard as I could, reminding me that a normal girl couldn’t throw punches like that.

Normal girls didn’t want their boobs mauled either, and I wholly believed if they could’ve landed a fist like I could, they would have.

I smiled up at Matt. “I’m not thinking about anything.”

“You’re not thinking at all?” Matt lowered his head. The edges of his blond hair tickled my cheeks. Thank the gods he’d gotten over the

“trying to grow dreads” stage in his life. “Nothing going on in that pretty head of yours?”

Something was going on in my head, but it wasn’t what Matt hoped for. As I stared into his green eyes, I thought about my very first crush—

the forbidden, older guy with thundercloud eyes—the one so far out of my league he might as well have been a different species.

Technically, I guess he was.

Even now, I wanted to spin-kick myself in my face for that one. I was like a walking romance novel character, thinking love conquers everything and all that crap. Sure. Love in my world usually ended up with someone hearing “I smite thee!” as she was cursed to be some lame flower for the rest of her life.

The gods and their children could be petty like that.

I sometimes wondered if my mom had sensed my budding obsession with the pure-blood guy and that was why she’d yanked my happy butt out of the only world I’d known—the only world I really belonged to.

Pures were
so
off limits to halfs like me.

“Alex?” Matt brushed his lips over my cheek, moving ever so slowly toward my lips.

“Well, maybe something.” I lifted up onto the tips of my toes and circled my arms around his neck. “Can you guess what I’m thinking about right now?”

“That you wish you hadn’t left your shoes back at the fire, because I do. The sand is really cold. Global warming is a bitch.”

He frowned. “You’re not thinking about history class, are you? That would be kind of lame, Alex.”

I wiggled out of his grasp, sighing. “Never mind, Matt.”

Chuckling, he reached out and wrapped his arms back around me.

Doubtful, but I let him lower his lips to mine. His mouth was warm and dry, the most a girl could ask from a seventeen-year-old boy. But to be fair, Matt was a pretty damn good kisser. His lips moved against mine slowly and when he parted them, I didn’t sock him in the stomach or anything like that. I returned the kiss.

Matt’s hands dropped to my hips and he eased me down in the sand, supporting himself with one arm as he hovered over me and trailed kisses over my chin, down my throat. I stared up at the dark sky riddled with bright stars and very few clouds. A beautiful night—a normal night, I realized. There was something romantic about all of it, in the way he cradled my cheek when his mouth returned to mine and whispered my name like I was some kind of mystery he’d never be able to figure out.

I felt warm and pleasant, not rip-my-clothes-off-and-do-me excited, but this wasn’t bad. I could get used to this. Especially when I closed my eyes and pictured Matt’s eyes turning gray and his hair much, much darker.

Then he slipped his hand under the hem of my sundress.

My eyes snapped open and I quickly reached down, pulling his hand out from between my legs. “Matt!”