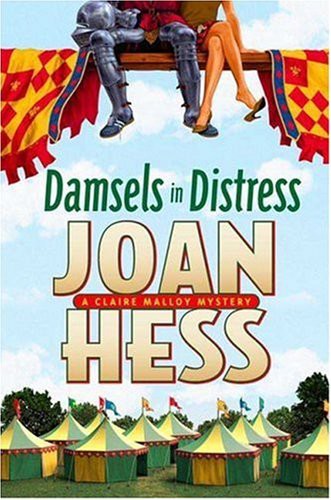 Roll Over and Play Dead

A Diet to Die For

Death by the Light of the Moon

Out on a Limb

DAMSELS IN DISTRESS
. Copyright © 2007 by Joan Hess. All rights reserved. Printed in the United States of America. No part of this book may be used or reproduced in any manner whatsoever without written permission except in the case of brief quotations embodied in critical articles or reviews. For information, address St. Martin’s Press, 175 Fifth Avenue, New York, N.Y. 10010.

For my new King family :

G
ood morrow, Kate; for that is your name, I hear.

I blinked at the young man in the doorway. “Well have you heard, but something hard of hearing. They call me Claire Malloy that do talk of me.”

“You lie, in faith; for you are call’d plain Kate, and bonny Kate, and sometimes Kate the curst; but Kate, the prettiest Kate in Far- berville. Kate of Kate Hall, my superdainty Kate, for dainties are all Kates, and therefore-”

“Mother,” Caron said as she came out of my office, “who is This Person?”

The peculiar man came into the bookstore and bowed, one arm across his waist and the other artfully posed above his head. He was dressed in a white shirt with billowy sleeves, a fringed leather tunic, purple tights, suede boots with curled toes, and a diamond- patterned conical cap topped with a tiny bell. His brown hair dangled to his shoulders, rare among the traditionally minded Färber College students. “Perchance miladies will allow me to maketh known myself?”

“This milady thinks you ought to maketh known thyself to the local police,” Caron said, edging toward me. “Start with the Sheriff of Nottingham.”

He stood up and swept off his cap. “Pester the Jester, or Edward Cobbinwood, if it pleaseth you all the more.”

“Not especially,” I said. “Would you care to explain further?”

“Okay, I’m a grad student at the college and a member of ARSE. I was assigned to talk to all the merchants at the mall and on Thurber Street about the Renaissance Fair in two weeks. We’d like to put up fliers in the store windows and maybe some banners. Fiona is hoping you’ll let us use the portico in front of your bookstore for a stage to publicize the event.”

“A Renaissance Fair? I haven’t heard anything about this.” I noticed Caron’s sharp intake of breath and glanced at her. “Have you?”

She nodded. “I was going to tell you about it when you got home this evening. The AP history teacher sent a letter to everybody who’s taking her course in the fall. We have to either participate in this fair thing or write a really ghastly midterm paper. I don’t think she should be allowed to blackmail us like this. Inez and I are going to get up a petition and have everybody sign it, then take it to the school board. I mean, summer is supposed to be our vacation, not-”

“Look not so gloomy, my fair and freckled damsel,” added Edward Cobbinwood. “It’ll be fun. We put on a couple of Ren Fairs when I was in undergraduate school. It’s like a big costume party, with all kinds of entertainment and food. ARSE will stage battles, and perhaps a gallant knight in shining armor will fight for your honor. “

Caron glared at him. “I am perfectly capable of defending my honor without the help of some guy dressed in rusty hubcaps.”

“The Association for Renaissance Scholarship and Enlightenment. It’s not a bunch of academics who meet once a year to read dry papers and argue about royal lineage or the feudal system. Anybody can join. The country is divided into kingdoms, counties, and fiefdoms. The local group is Avalon. There are just a few members in town this summer, but when the semester starts in September, Fiona says-”

“Fiona Thackery,” Caron said with a sigh, not yet willing to allow me to dismiss her imminent martyrdom. “The AP history teacher. I’m thinking about taking shop instead. I’ve always wanted to get my hands on a nail gun. Or if I take auto mechanics, I’ll learn to change tires and…tighten bolts and stuff like that. That way, when your car falls into a gazillion bits, I’ll know how to put it back together. That’s a lot more useful than memorizing the kings of England or the dates of the Napoleonic Wars.”

“You’re taking AP history,” I said. “If you want to work at a garage on the weekends, that’s fine with me.”

She gave me a petulant look. “Then you can write the midterm paper: ‘Compare and contrast the concepts of Hellenism and Hebraism in
The Divine Comedy
and
The Canterbury Tales
. Cite examples and footnote all source material. Five-thousand-word minimum. Any attempt at plagiarism from the Internet or elsewhere will result in a shaved head and six weeks in the stocks.’ “

I cupped my hand to my ear. “Do I hear the lilting melody of ‘Greensleeves’ in the distance?”

“The only recorder I’m playing,” Caron said sourly, “will have a tape in it.”

Edward seemed to be enjoying the exchange, but fluttered his fingers and strolled out of the Book Depot to bewilder and beguile other merchants along the street. He must have had a recorder tucked in his pocket, because we could hear tootling as he headed up the hill. It may have been “Greensleeves,” but it was hard to be sure. I hoped he wasn’t a music major.

“Goodness gracious,” said Inez Thornton as she came into the bookstore. Her eyes were round behind her thick lenses. “Did you see that weirdo in the purple tights?”

Inez has always been Caron’s best friend through thick and thin (aka high crimes and misdemeanors). Caron, red-haired and obstinate, faster than a speeding bullet except when her alarm clock goes off in the morning, able to leap over logic in a single bound, is the dominant force. Meek, myopic Inez is but a pale understudy in Caron’s pageant, but equally devious. Encroaching maturity tempers them at times. There are, of course, many other times.

“Tell me more about the letter from your history teacher,” I said.

Caron grimaced. “This Renaissance Fair sounds so juvenile. Everybody has to dress up as something and go around pretending to be a minstrel or a damsel or a pirate or something silly like that. There’s a meeting tomorrow afternoon at the high school so we can get our committee assignments. It’s like Miss Thackery thinks we’re already in her class. She shouldn’t be allowed to get away with this. It’s—it’s unconstitutional!”

“I’m not sure reading Chaucer and Dante will make you all that happy, but you never know,” I said. “You’ll find copies on the back shelf. Help yourselves.”

Rather than take me up on my generous offer, they left. I would have felt a twinge of maternal sympathy had they not been muttering for more than a month about how bored they were. I’d never been to a Renaissance Fair, but I supposed it was similar to a carnival show, with tents, booths, and entertainment—not to mention men clad in armor made of aluminum foil, bashing each other with padded sticks.

Pester the Jester did not reappear, to my relief. I’ve always been leery of men in tights, especially purple ones (tights, not men). The few customers who drifted in were dressed in standard summer wear and more interested in paperback thrillers and travel books than in Shakespeare. Business is sluggish in the summer, when most of the college students have gone home and their professors are either wandering through cavernous cathedrals in Europe or sifting sand at archeological digs. The academic community as a whole comprises nearly a quarter of Farberville’s population of twenty-five thousand semiliterate souls. Their civilian counterparts tend to do their shopping at the air-conditioned mall at the edge of town when the temperature begins to climb.