Read Dancer in the Flames Online

Dancer in the Flames 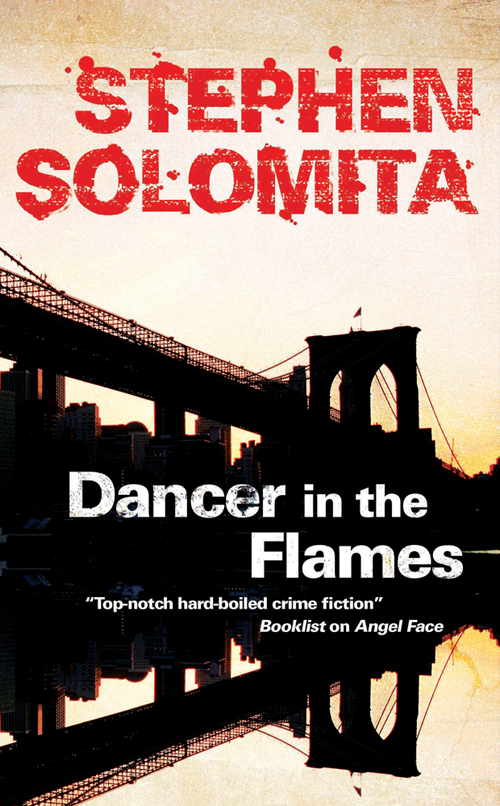 A Selection of Recent Titles by Stephen Solomita

A Selection of Recent Titles by Stephen Solomita

A GOOD DAY TO DIE

A PIECE OF THE ACTION

MONKEY IN THE MIDDLE *

DANCER IN THE FLAMES *

DANCER IN THE FLAMES
Stephen Solomita

First published in Great Britain 2012 by

First published in the USA 2013 by

The right of Stephen Solomita to be identified as the author of this work has been asserted in accordance with the Copyright, Designs & Patents Act 1988.

Dancer in the flames.

This eBook produced by

I’m not big on philosophy, Boots.
In fact, as far as I’m concerned,
The examined life’s not worth living.

D
etective Boots Littlewood shook out a handful of Tic Tacs and popped them into his mouth. He sucked on them for a moment, intending to savor the flavor, as he liked to say. But on this particular night, what with the disagreeable job at hand and the unusually cold April weather, he quickly grew impatient. Very deliberately, he straightened the lapels of his overcoat before crunching down hard enough to produce an explosion of spearmint that saturated his entire mouth, from his lips to his tonsils. Finally, he rang the doorbell.

The outdoor light came on a moment later and a face appeared in the door’s small window, a round face made rounder by the window’s beveled glass. Then the door opened to reveal Frankie Drago, the man Littlewood had come to see.

Detective Littlewood stepped into the house, forcing Drago aside. As he passed, he pulled a transistor radio from his overcoat and held it up for Drago’s inspection.

‘Batteries went dead on me,’ he explained. ‘I don’t wanna miss the end of the Yankee game. Plus, I’m killin’ two birds with one stone. The autopsy’s complete and you asked me to stop by, let you know how it went.’

Passing through the foyer and into the living room, Boots placed himself in front of a gigantic flat-screen television. He watched the Yankee reliever, Joba Chamberlain, deliver a high outside fastball that David Ortiz, the Red Sox batter, was taking all the way. Then he said, ‘You don’t mind, I’m gonna keep an eye on the game while we talk. I got a bet down, if you remember.’

Boots shrugged off his overcoat, folded it across the back of an armchair, finally settled himself on the couch, only pausing to tug at the crease in his trousers and press the remote’s mute button.

‘You think I don’t know you got a bet down?’ Drago followed Boots into the room. ‘I’m your goddamned bookie.’

‘Hey, do me a favor, Frankie. Lay off. I got a thing about takin’ the Lord’s name in vain. Which you already know.’

Drago was about to respond when Chamberlain began his wind-up and the Yankee catcher stepped to the left, setting a target on the inside corner, a target Joba missed by eight inches when the ball sailed away from Ortiz before centering itself, belt-high, over the heart of the plate.

‘You mother-fucker,’ Boots shouted as the bat of David Ortiz ripped through the hitting zone.

‘Boots,’ Frankie Drago said, ‘you can open your eyes. He popped it up.’

Littlewood followed instructions, regaining his sight in time to watch the ball drop into Bret Gardner’s glove. The score was tied six–six and the Yankees were coming up to start the tenth inning.

‘Chamberlain,’ Boots complained, ‘that prick. You see him walkin’ around out there? This is a guy, lemme tell ya, he’d rather be takin’ a shower.’

‘Frankie, what’d I just say about blasphemy? Have some consideration here.’

Drago raised a meaty hand to scratch his left ear. He was a short man, grossly overweight, and his movements were slow enough to appear grave. ‘Didn’t you just call Chamberlain a prick and a mother-fucker?’ he asked.

‘That’s different.’ Boots turned far enough to look up at the bookie. ‘The Commandment only says you can’t take the Lord’s name in vain.’

Drago sat down in a massive rocking chair to Littlewood’s left. For a long moment, he stared at the side of the detective’s head. Drago had known Boots for more than twenty years – their relationship went all the way back to high school. And that was the wonder of it, because he still couldn’t peg the big cop. The gray three-piece suit? The baby-blue tie? The gleaming ankle-high boots? The nearly transparent silver socks? The coarse iron-gray hair that hugged the top of his head as though afraid to move?

‘Bullshit’ was the word that popped into Drago’s mind. Just like the rest of the cop’s life. Here was a man who went to mass every Sunday, but tolerated Frankie Drago because he needed a place to lay down his bets. Here was a man who called himself Boots because his real name, Irwin, didn’t square with his image. You couldn’t be a hard-ass cop in a suit too expensive for your paycheck and have a name like Irwin Littlewood. Impossible. So, whatta ya do? You make up a name that fits your image like the handmade Italian boots on your feet. Then, as if that wasn’t phony enough, you swear that you only spend that kinda money on shoes because you got bad wheels.

Drago ran a hand across the top of his nearly bald head. It came back slick with sweat and he wiped it on his pants. ‘You wanna tell me what happened?’ he asked.

The requested second stretched on for a full two minutes as the Red Sox pitcher, Alfredo Aceves, walked the Yankee center fielder, Curtis Granderson, on four straight pitches. The Red Sox manager, Bobby Valentine, was out of the dugout before the catcher reached into his mitt for the ball, his head shaking in disgust as he signaled for Tim Wakefield, the last available pitcher in the Red Sox bullpen.

Boots crossed his legs and let his gaze drift over to Frankie Drago as the network cut to a commercial. ‘It’s a question here of how much you wanna know, Frankie,’ he said. ‘Bein’ as we’re talkin’ about your sister.’

When Drago shook his head, his many chins slogged from side to side like water in a bathtub. ‘It can’t be no worse,’ he insisted, ‘than what I already imagined.’

‘OK, then let me get this part over with. Angie was naked when we found her body, with her arms tied behind her back and a thin rope tied around her neck. There was an unused condom next to her leg, still in its wrapper, a ribbed Trojan. Keep in mind, Frankie, this was a disposal site. She wasn’t killed in Prospect Park.’

Drago thought it over for a moment, then said, ‘Angie, she was forty-nine years old and looked every day of it. Why would . . .?’

‘That part doesn’t matter. Some of these perverts specialize in older women, and some of them just grab whoever’s available. Anyway, we at least determined when her body was put in the park.’

‘You remember March fifteenth? The blizzard?’

‘Well, we found a little snow beneath Angie’s body and we’re certain there wasn’t any snow on the ground before the storm hit. That means the blizzard started right before she was dumped, two days after your mom reported her missing.’

‘You think she was held somewhere?’

‘There’s no other possibility.’

‘She was dead, Frankie.’

‘And you can tell how long?’

‘Thirty-six to forty-eight hours, accordin’ to the pathologist who did the autopsy. That’s how long the perp held on to her body.’

Boots’s attention returned to the television as Tim Wakefield threw his last warm-up pitch. ‘Valentine’s gotta be pissing his pants,’ he told Frankie.

‘He ain’t the only one,’ Drago replied. ‘I took a lotta Yankee action this afternoon. They win, I’m up shit creek.’

‘Sometimes in life you gotta take a chance, Boots. With Beckett goin’ against Freddy Garcia, I figured I had an edge.’

Boots shook his head. ‘The way I saw it, with all the injuries to the Red Sox bullpen, after the Yanks got past Beckett, they’d be the ones with the edge.’

An instant later, the Red Sox pitcher took an important step toward neutralizing whatever edge the Yankees may have had when he picked off Curtis Granderson. Boots’s mouth dropped open and his eyes widened as he absorbed the extent of his misfortune. He started to speak, stopped, then started again. Still, no words came out.

Flashing a wolf’s grin, Drago took a pack of cigarettes from his shirt pocket. He lit one up, then blew a narrow line of smoke at the ceiling. ‘So,’ he asked, ‘how’s the quittin’ goin’? You still nicotine-free? It’s been, what, a month now?’

Billy Hooten by Tom Sniegoski
Kiss a Stranger by R.J. Lewis
The Men Behind by Michael Pearce
My Wild Highlander by Vonda Sinclair
Untamed: The Savage: The Complete Series by June Gray
Appleby and the Ospreys by Michael Innes
Only Son by Kevin O'Brien
Iced On Aran by Brian Lumley
Luminous by Corrina Lawson
Super Villain Academy 2: Polar Opposites by Kai Strand
Our partner