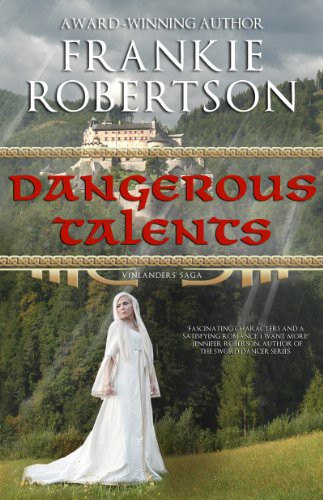 "Grabs you from the start with excellent pacing, fascinating characters and culture, and a satisfying romance. I want more!"

~ Jennifer Roberson, bestselling author of
Karavans
, the
Sword Dancer
series, The Chroncles of the Cheysuli, and
Lady of the Glen
.

"Romance, peril, and magic: what more could anyone ask? I note as well, this Frankie Robertson—she, too, has dangerous talents."

~Dennis L. McKiernan, author of the Mithgar series, the Faery series, and other works.

~ Jill Knowles, author of
Concubine
, and A Pirate's Primer.

~ Melanie Rawn, bestselling author of
Touchstone, The Dragon Prince
, and
The Diviner
.

"Kept me guessing until the very end."

~ Jordan Summers, author of The Phantom Warriors series, and the Atlantean's Quest.

~ Roxy Rogers, author of
Gabriel's Release
, and
Be Careful What You Wish For
.

"Riveting! I can't remember the last time I enjoyed a book so much. Ms. Robertson has written a compelling story with engaging characters and a well paced plot."

~ Caroline Mickelson, author of
From Mangia to Murder: a Sophia Mancini Mystery
.

"I stayed up way past my bedtime because I couldn't put it down."

WITH HEART TO HEAR

"Ms. Robertson combines a lush prose style with a sharp eye for characterization and detail. You will not be disappointed."

~ Jody Wallace, author of
Pack and Coven, A Mage By Any Other Name
, and other works.

All rights reserved. Except for use in any review, the reproduction or utilization of this work in whole or in part in any form by any electronic, mechanical, or other means, now known or hereafter invented, including xerography, photocopying and recording, or in any information storage or retrieval system, is forbidden without the written permission of the author. The scanning, uploading, and distribution of this book via the Internet or any other means without the permission of the publisher is illegal and punishable by law. Please purchase only authorized electronic editions of this book, and do not participate in or encourage electronic piracy of copyrighted materials. Your support of the author’s rights is appreciated.

This is a work of fiction. Names, characters, places, products, and incidents are either the product of the author’s imagination or are used fictitiously, and any resemblance to actual persons, living or dead, business establishments, events, or locales is entirely coincidental.

This book is better due to the generous advice of the Working Title critique group: Brian Gross, Dave Felts, Larry Hammer, Jill Knowles, Roxy Rogers, and Janni Lee Simner, and has benefitted from the attention of the Tanque Wordies critique group: Dennis L. McKiernan, Diane Turner, and John Vornholt. A special thank you to Martha Lee McKiernan for plying us with delicious desserts.

My editor Rochelle French at Edits That Rock http://www.editsthatrock.com helped put the final polish on DANGEROUS TALENTS, and Kim Killion of Hot Damn Designs http://hotdamndesigns.com demonstrated tremendous patience and professionalism as we designed a great cover for it.

The Saguaro Romance Writers chapter of the Romance Writers of America is an amazing group of people. They've been extraordinarily supportive, and have given me a safe environment to learn and grow as a writer.

Most especially I want to thank my husband Brian for his unending encouragement and support.

For Les Reese, a talented writer, gone too soon.

“You can pay me the rest now.”

Cele Montrose pointedly looked around. There was nothing but steep rock, scraggly brush, prickly pear, and saguaro cactus in sight. Then she cast a sharp look at her guide, Berto. He’d stopped beside two ancient stone cairns that rose shoulder high on either side of the pitiful excuse for a trail. “I don’t see any petroglyphs.”

Berto’s dark brown eyes wouldn’t meet hers. “They are close. Just a little way farther on. You get there easy.”

“You promised to take me to the glyphs. That’s our deal.” Cele had met Berto at Udall Park before dawn so he could take her to see the Fifth World petroglyphs. Most experts doubted they existed, but a few sources claimed they were unlike any others. Cele couldn’t resist and had sent out feelers for more information. Berto had responded to her queries.

“Sacred?”
Crap
. She wanted very much to photograph those petroglyphs, but she
didn’t
want to get in trouble with the Tribal government. “But we’re not on the rez.”

Berto met her eyes. “No. They do not come here. Not for many years.”

Her guide’s gaze slid away from hers again, and she started to wonder if she’d made a mistake coming here alone with him. She’d checked Berto out. He’d worked for couple of her archeologist friends, all of whom had spoken well of him, so this morning she’d followed his battered pickup north and east of Tucson, down a little-used dirt road and past a sagging, metal gate. From there the old track rose steeply into the foothills, twisting and turning into the Catalina Mountains. It was much too rough for her vehicle, so she’d parked her Civic and climbed into Berto’s ancient Ford.

Eventually, the road grew too rutted even for the truck, and they’d started to hike through the scrub. Berto had said it would only be a short walk, but if she’d known they’d be bushwhacking, she’d have worn jeans instead of hiking shorts, no matter how hot it was. He’d followed a trail that looked like little more than an animal track until they’d reached this place marked with drystacked rocks fitted neatly together to form two five sided towers that rose shoulder high. There he’d stopped and shifted nervously from one foot to other.

“Berto, what’s the problem?” she repeated.
Are there smugglers in the area
?

His eyes darted all around before they returned to hers. “The spirits walk here.”

Cele relaxed. He wasn’t worried about somebody shooting him. “The spirits?”

“
Sí
. This is the place where the Old Ones disappeared. Sometimes the spirits who took them come looking for more.”

Cele grinned. “That’s a cool story. I’d like to hear the rest of it. You can tell me while you take me to the petroglyphs.”

“No. I will not go beyond
la señal de madrina
.”

The sign of the godmother
? Was he using this nonsense to jack up the price? “No glyphs, no more money.”

“Pay me what you agreed!” Berto took a step forward, and Cele retreated beyond the towers, lifting her hands, ready to use her self-defense skills if necessary. The guide, however, didn’t follow.

She’d paid him half, and she already had a spot picked out on her wall for these photos. Her mother had taken an impressive collection of photos of Southwest Indian artifacts and petroglyphs, and Cele wasn’t going to let superstition prevent her from adding to her mother’s legacy. “Look, if your story is a good one, I can sweeten our deal. How does another forty sound?”

“No!” Berto’s posture grew even more rigid, but he didn’t come any closer.

Cele frowned, confused by his flat refusal. “There’s no way I’m going to pay you before I see the glyphs.”
And I’m sure as hell not going to pay him before I’m back in his truck
.

“This was a mistake. I should not have brought you here. Forget the money. We go now.” Berto wiped his sweaty palms on his jeans.

Shit
! He was really scared, not just greedy. Cele stepped forward, one hand outstretched. “Wait a minute! I’ll tell you what. How far is it? I’ll go, take my pictures, and then you can take me back to town. Then I’ll pay you the rest. Okay?”

Berto hesitated, and then nodded. “Okay. I wait. One hour.”

The guide shook his head. “They are close, the glyphs. An hour. No more.”

Resigned, Cele sighed. Now that she knew how to get here, she could come back and stay longer on her own. “Okay. One hour.”

Berto gave her directions, and she left him pacing on the other side of the stone markers.

Less than twenty minutes later, Cele was peering over the edge of a narrow defile. Distinctive, light gray petroglyphs decorated virtually every surface of the dark gray rock face, like some prehistoric message board. Her mother would have loved photographing this site.

I have to get closer
. She was going to get the first pictures of the Fifth World petroglyphs. She’d share them with the archeologists at the university, but just as Tenen and Tufts had kept the location of Kartchner Caverns secret for twenty years, she wouldn’t tell where she’d found these glyphs. From Berto’s behavior, she didn’t think he would either. Which was a good thing. She didn’t want these beauties defaced by souvenir hunters.

She looked for a way down.
It’s only about twenty feet
. Even better, it looked like weathered handholds were cut into the descent.

Cele carefully lowered herself over the edge and climbed down. When she reached the bottom and stepped away from the wall, she heard a low humming. She nervously looked around for a swarm of bees, but as her gaze swept the walls, she forgot her fear. The glyphs were so clear, more distinct than any she’d seen before, as though they’d been carved only yesterday.

Is this a scam
? Had Berto carved these glyphs himself?

She moved closer to examine a spiral carving. Even though they were distinct and clear, the indentations of the pattern were weathered, just like the surface of the rock. She’d bet that these petroglyphs were just as old as Berto claimed.

Amazing
. She stepped back to take in the panorama.

Decorated by long dead hands, the rock face was alive with images in motion. Stick figure gods danced with a huge boar over the walls, and the spiral of the universe swirled before her gaze. A man and a woman slithered up a rainbow spanning the handholds she’d descended.

Not trusting her eyes, Cele blinked and looked again. The images were quiet.

Of course they’re quiet. They’re stone
. She dug her camera out of her fanny pack.

The humming grew louder. It had a rhythm now, like a drumbeat.
Where’s it coming from
? She scanned the area, but saw only a raven sitting on the crest of the wall.
Where did he come from
? She hadn’t seen him fly in.

The raven regarded her with a sharp eye, then cawed. She raised her camera to take his picture, but an odd urgency suddenly gripped her. She had to get out of there.
Climb out
!
Now
! The thought felt like a command. Cele glanced at her watch. She still had forty minutes left before she had to get back to Berto, but she couldn’t shake the feeling that time was running out. She had to leave. Cele slung the strap of her camera over her head.

Grabbing the handholds, she pulled herself up. The throbbing hum quickened, and her fingertips tingled in time with it. She climbed faster, in time with the beat.

Her arms ached with the effort, but she didn’t care. She was almost there, almost to the top. Just a few more feet, and she’d be safe. Then abruptly, she was jerked away from the stone.

Unsurpassed by Charity Parkerson
Somewhere in Time by Richard Matheson
The Price of Candy by Rod Hoisington
A Vampire Novel: Reach Before Dawn: Inspired by a true story (A Dark And Seductive Horror Story) by McInnis, Camden
Cast a Pale Shadow by Scott, Barbara
Bachelor Auction by Darah Lace
Frost by Wendy Delsol
The Missionary by Jack Wilder
Dead Reckoning by Kendig, Ronie
The Lady Who Plucked Red Flowers Beneath the Queen's Window by Rachel Swirsky
Our partner