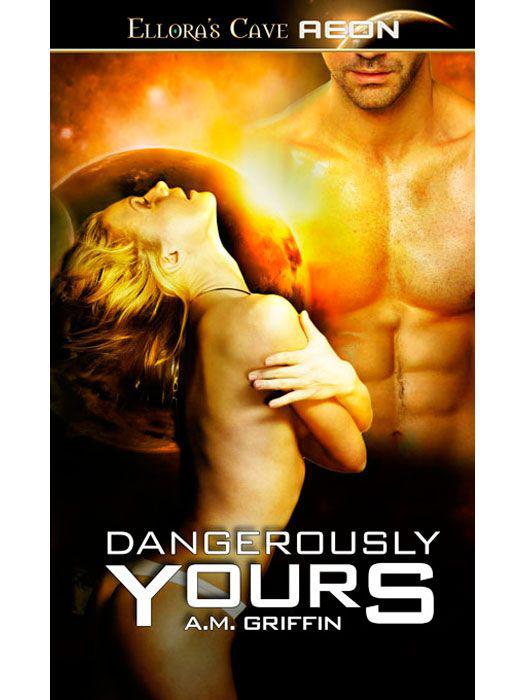 The steamy standalone sequel to
Dangerously Mine
.

Kane Epps divides his life into two distinct parts—before the alien invasion and after. Before the invasion, he had a pregnant wife and a high-powered job. After the invasion, he’s left with only himself and his hatred for all things alien. He channels his bitterness by captaining a vessel of renegade humans—space pirates who don’t think twice about taking what they need.

Princess Sa’Mya is on the run. She and a few trusted advisers fled her home planet only to be captured by the sexy, dangerous Captain Epps. He claims to hate aliens but can’t seem to resist touching her or kissing her…everywhere. As Kane introduces Sa’Mya to ever-increasing, unimaginable realms of pleasure, the princess becomes determined to earn his trust. She’s used to getting what she wants. And this time, what she wants is Kane Epps.

This book is dedicated to my amazing husband and children, whose names are littered throughout these pages.

Thank you to EC for welcoming me into the family. Thank you to Carrie Jackson, my editor extraordinaire. Many thanks to my critique partners Stephy and Terrie, who have helped me shape the characters, and love them just as much as I do, my sisters Thella and Tasha for being my personal “street team” and last but not least, my beautiful mother, who is always by my side.

Holding tight to his wife’s hand, Kane pulled her along. She stumbled behind him, tripping on rubble, debris and concrete. He cast his eyes toward the large metallic spacecraft sitting low in the sky above New York City, blocking out the sun and moon, bathing everyone in perpetual darkness. He glanced at the watch on his wrist. It was 3:21 p.m.

“Come on, baby,” he coaxed gently. “I know you’re tired but we have to keep moving.”

“I’m trying to.” Anna’s chest heaved in and out.

Her dirty-blonde bangs clung to her flushed forehead. The maternity jeans she had thrown on when they were forced to leave their brownstone were now torn and covered in dirt. Her too small maternity shirt stretched over her pregnant abdomen. And after all this time, his clothes weren’t any better.

His gaze lingered on her fragile form. His heart lurched in his chest. The dark freckles dotting her face leaped out in contrast to her pale skin. She needed food, water and rest.
Now.
He blew out a heavy sigh.
That’s not going to happen anytime soon
, he thought, taking in his surroundings.

Through the darkness, he caught a glimpse of his companions. The group of seventeen men, women and children continued forward in their pursuit across the city without even a backward glance to where he and Anna lagged behind, again. The group of survivors should’ve been able to cover more ground than they had. But their pace slowed considerably to account for Anna being eight-and-a-half-months pregnant. Thanks to in vitro fertilization, she was pregnant with twins.

The delirious thought almost made him laugh out loud. They had spent nearly thirty thousand dollars to get pregnant and a few months later, hostile aliens had invaded Earth.

He tore his gaze away from the group and studied Anna. She propped herself against a broken street sign. She coughed as she breathed in the contaminants of the air.

A high-pitched wheezing sound came from her lungs with every labored breath that she took. Sweat dripped from her forehead to her brow. One hand held the side of her head and the other rested on the side of her belly. Although she hadn’t said anything, he could tell she was more swollen today than yesterday.

He placed a hand over her extended belly. “How are the babies?”

He didn’t know much but he did know the babies should have been moving under their touch. The lack of movement confirmed Anna couldn’t continue any longer. It was too risky.

“They’re fine,” she said between pants.

Not believing her, he shook his head. “We have to st—”

Anna cradled his chin, bringing his face to look at her. “Kane, I can do this.”

Although determination was written across her features, he didn’t think she could go on for a few more minutes let alone hours. Breaking eye contact, he worked the knapsack off her back. He slung it over his shoulder along with his and scooped her up into his arms, ignoring her protests. Her pregnant weight made his muscles flex tighter around her.

She stroked the side of his cheek. “Kane.”

He looked down into worried hazel eyes. “What?”

“You can’t carry me forever.”

“Only for a little while. We need to keep moving, baby.”

She buried her head onto his chest. “I love you.”

She brought her head up to him again. A slight smile played on her lips. “Even though I’m chunky and fat?”

“You’re pregnant and healthy.” He followed the trail of the survivors. Their backs came in and out of view as the group traversed up and around large slabs of concrete that had once been paved city streets.

She gave his biceps a light pat. “Nice save, counselor,” she teased weakly.

“That’s me, Kane Epps, esquire. I can talk my way out of the hairiest of situations.”

Her playfulness slowly disappeared as she scanned the horizon. “I wish you could’ve negotiated us out of this one.”

Kane’s gaze followed hers, catching sight of the Statue of Liberty in the distant horizon, toppled on its side.

In less than a week of their arrival, the aliens had wreaked havoc on Earth. Crumbled buildings lay in heaps all around them. Alien weapons uprooted city streets. Alien bombs leveled countries. Alien technology disrupted communication, television, phones and radios. US military forces were swatted down as though they were flies.

“We’re going to be fine.” His voice came out tight and hard.

Anna rubbed his chest. “I know.” Her reassurance and faith in him sent waves of tenderness through his heart. “You’ll take care of me.”

Right. He would take care of her.

Two hours later, he began to stumble. When his knee dropped to the ground, he got up and gathered a protesting Anna back into his arms. His jeans no longer offered a buffer between his knees and the concrete, as evidenced by a bloody smear left as he’d risen to his feet. Each time he fell he had a harder time getting up and continuing.

His knee hit the ground again, landing on broken concrete. He let his head fall forward as he bit back a gasp of pain. A bead of sweat ran from his short, white-blond hair down the bridge of his nose, where it lingered before finally dripping to the ground. Closing his eyes, he willed the pain away, clasping Anna tight to him. With renewed energy, Anna worked to pry his hands from her arms and legs in an effort to free herself.

When he wouldn’t release her, she pleaded, “Honey. Let me go. I can walk now.”

“No. I can do this.” He fought the urge to look at her, fearing if he did she would see the pain that shone in his eyes.

“Kane. Look at me,” Anna pleaded softly. Reluctantly, he obeyed. “You need to let me walk.”

“I have to.” She shook her head in determination. “I can’t let you kill yourself. Let me go.”

Anna let out an irritated sigh. “I love you too, but so help me God, if you break a leg trying to carry me, I
will
kill you.”

His feisty pixie was back. Kane let her slide from his weary arms to her steady feet. He wanted to stay with the group. Safety in numbers sat better with him. But he also needed to rest and couldn’t risk losing his wife or babies. The pace the group had set was grueling.

It wasn’t as if the group would miss them or anything. The survivors would probably welcome losing the dead weight. It was Anna he feared wouldn’t take the news too lightly.

Prepared for a fight, he fixed his stare on her. “Baby, I think we need to find a place to hide for the night.”

Her gaze went from him to the retreating group. “But…but what about them?”

“Oh Kane.” Her lips began to tremble. Tears fell as he squeezed her hand in his. “We can’t get separated from another group. Let me at least try to walk.”

He kissed her dirty, pale cheeks. “No, baby. I won’t risk it. You and the babies mean more to me than they do. We can hide in one of the abandoned houses.”

He pulled her in a tight embrace. He would do anything for her. Keeping her safe had become his number-one priority.

“Don’t start that. Those people don’t know what’s going on any more than we do. We’ll stay hidden. Don’t worry. I’ll keep you safe.” He ran his hand across her brow, wiping the long bangs away from her red-rimmed eyes.

“What about the others?” she asked, wide-eyed. “Do you think we’ll be able to catch up with them tomorrow?” She grimaced and rubbed her belly again.

“Yeah, we can do that.” He had to make her believe the lie. Whatever the case, they would never see them again.

It took more than an hour but they finally found a house safe enough to enter without the fear it would crumble around them. Although the modest brownstone leaned precariously on its side, it would do for the night.

Kane entered, kicking the debris out of his way, Anna’s limp hand planted firmly in his. The smell of mildew and decay overrode his senses. The dirt that caked the furniture told of its abandonment. Dust wafted through the air, stirring with each step they took. Her dainty hand that covered her nose and mouth did nothing to keep it from settling in her lungs. Anna coughed as he led her through to the living room.

“Here, sit down. I’m going to check the kitchen for food and bottled water.” He let her go, settling her on a loveseat, the only piece of furniture in the room that didn’t look as if it would break apart under her pregnant weight. “Don’t go anywhere.” He didn’t want her exploring before he could make sure the structure was safe.

He propped the two knapsacks next to her. His jangled and clanked as he set it down. Hers made a soft rustling noise. As alien bombs had rained from the sky and life as they knew was no more, he had grabbed supplies and tools needed for survival, while she had wasted precious time taking pictures out of frames and photo albums.

Anna’s warm smile was meant only for him as she eased onto the dirty loveseat, pulling the knapsacks closer to her. “You can’t get rid of me that easily.”

He couldn’t help but return her smile. This was why he loved her. Even in this, she still had her sense of humor.

He strode purposely through the double swinging kitchen doors and headed straight to the cabinets. He wanted to let out a frustrated scream as he flung open each one. Empty. Every cabinet he opened, empty. He frantically scanned the room, locking on what he sought.

He made it to the door and swung it open. Empty.

His knees buckled underneath his weight. He grabbed the doorframe with a shaky grip. Anna needed to eat. She was already too weak to go on.