Read Dark of the Moon Online 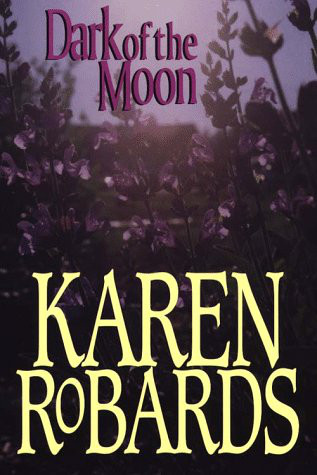 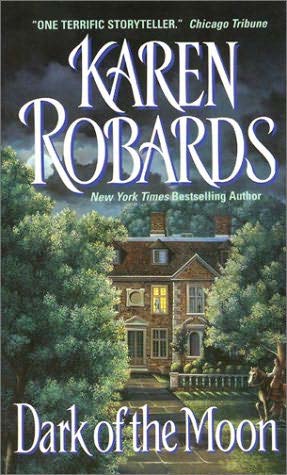 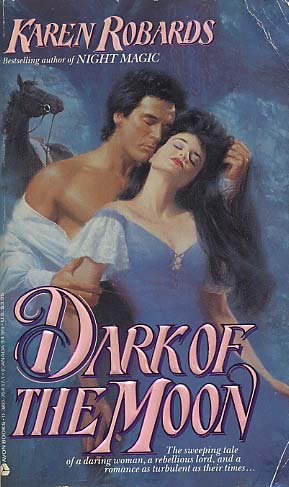 Caitlyn O'Malley was a lass, but none would have known it who saw her swaggering along Dublin's narrow cobbled laneways on that misty April afternoon in 1784. For the last eight of her fifteen years of life, she had aped the role of a male. So successful was she at it that she herself forgot her true sex for days at a time. Her unkempt black hair was cropped into a ragged bob that just touched her shoulders. A constant layer of grime obscured delicate features.

Thick-lashed kerry blue eyes, big as agates in her hunger-pinched face, passed almost unnoticed amidst all her dirt. With her spindly frame clad in shabby, cast- off coat and breeches that were two sizes too large, she looked as much like a ragged twelve-year-old boy as her companion, who could lay claim to the condition in truth.

"B'God, O'Malley, would ye take a whiff o' that, now?" Willie Laha stopped to sniff enviously at the tray of meat pastries that the vendor was setting out on the counter of his cart.

They were so fresh steam was rising from them. Staring at the golden-brown crusts, sniffing their delicious aroma, Caitlyn felt her mouth water. Pangs of hunger twisted her stomach.

Neither she nor Willie had eaten the night before nor all that day, and it was nigh onto evening again. Pickings for supper were likely to be slim. The gangs of urchins and beggars that haunted the mews intersecting O'Connell Street had become so notorious that the merchants were going about armed. It was worth a lad's life to pinch so much as an apple. With the street fair in progress and the workers from the quays crowding the street every night, pickings should have been plentiful. But revelers were guarding their purses, and merchants were watching eagle-eyed over their wares. Only a week ago, Tim O'Flynn, one of the loose gang of boys that was the closest Caitlyn had to family since her mother died, had been hanged for stealing two plums and a chunk of bread. With that example fresh in mind, Caitlyn was more cautious than was her wont, although hunger was beginning to override her unaccustomed prudence. If she did not steal, she would not eat.

"You there! Move along or I'll be takin' me stick to your hides!" The growl came from the red-faced merchant, who had noticed their interest and was glaring ferociously at them, stout stick in hand. Caitlyn made a rude gesture in return but did not resist as Willie pulled her along the street, which was lined on both sides by vendors' carts displaying everything from meat pasties to leather shoes.

"We'd best hold off until Doyle and the rest come up to us. Two alone's not good odds."

Caitlyn scowled at Willie's caution. O'Flynn's fate was making women out of the lot of them. They had to shake the specter of it if they were to eat on anything approaching a regular basis. It was foolishness pure and simple to think—as Willie and some of the others did—that they were cursed by bad luck. O'Flynn just hadn't been careful enough or fast enough. The lesson to be learned there was not to stop stealing, but to make certain sure not to be caught.

"Look there." With a nudge she directed Willie's attention farther down the street. A tall, lean man in a froth of lace and finery was making his way with fine unconcern through the dirty, bare-armed quay workers who with their doxies were beginning to fill the street. As they watched, he pulled a gleaming gold watch from his pocket, flipped it open with a polished thumbnail, and looked at it for a brief moment before carelessly replacing it. Scorn twisted Caitlyn's mouth into a sneer. Obviously the gentleman was new-come from bloody England, one of the hated Ascendancy, and none had thought to warn him not to venture into the city's dangerous Irish quarters. He strolled along as though he hadn't a care in the world, completely oblivious to the sullen looks he was receiving from the shabby tides of the oppressed surrounding him.

"A right lamb for the fleecin', Willie, me lad." Cait- lyn's eyes gleamed with a combination of avarice and hatred as they fixed on the gentleman. The hatred had nothing to do with him personally. The Irish hated the English from birth onward. It was bred in blood and bone. "Sent straight from the Holy Mother to brighten our path. These boyos'll have every stitch off him before he goes much further, so we'd best be gettin' the cream off the top."

Willie looked around uneasily. He was redheaded and freckle-faced under the layers of grime, but instead of being bold and hot-tempered, as redheads were supposed to be, he was both cautious and easygoing by nature. O'Flynn's fate had merely aggravated unfortunate qualities that he already possessed. "Whisht, now, O'Malley, there's too many witnesses about.

It's caught we'll be for certain sure."

"Don't be daft, Willie, there's naught that's different from always." She was impatient. "We hit him and run, just like we've done more times than you can count. We'll have his pockets cleaned and be off before he even knows something's amiss."

"Holy Mary, Willie, and here's you wantin' to ride with the Dark Horseman! He'd never take such a wee coward." Caitlyn conjured up the name of Ireland's boldest highwayman deliberately. Becoming a member of his gang had long been a dream of Willie's, a dream with about as much substance as one of Ireland's mists. The man was practically a national hero, after all. What accounted for his astounding popularity was that he robbed only the rich Anglicans of the hated Ascendancy and was rumored to share his laigesse with his starving countrymen. His identifying mark was the Cross of Ireland, which he always wore in the form of a silver pendant hanging from a chain about his neck. That was how the people knew that the Dark Horseman was as Irish as they. Although the Horseman was highly revered and much talked about in the Irish quarters, and regarded with universal fear among the Anglicans, no one could lay claim to have ridden with him, or knew his true identity, or even if he truly existed.

But his name could galvanize Willie, without fail.

"I'm no coward! And the Horseman would take me sure! Just you watch this!" Willie was already starting toward the gentleman. Caitlyn followed a little way behind him, a small grin curving her lips. Invoking the Dark Horseman was better than flaying Willie with a whip.

"Please, yer lordship, c'n ye spare a copper? For a starvin' boyo?" Willie had reached the gentleman and was bowing and scraping in front of him, whining his beggar's whine. The purpose was to focus the victim's attention on Willie to the exclusion of all else. While the gentleman was distracted, Caitlyn, walking past, would supposedly stumble and fall against him, muttering a pardon as she deftly relieved him of his purse and the gleaming gold watch that was tucked into a waistcoat pocket, its chain glinting across the fine white cloth covering his middle.

"Don't beg, lad," the mark said gruffly, scowling down at Willie, who continued to grovel and whine before him. "You shame yourself."

Here was a fine gentleman in truth, Caitlyn sneered silently as she approached, worried about a starving lad shaming himself. She'd like to see him forced to steal and beg and do anything and everything for a crust of bread. From the prosperous look of him, he'd never so much as missed a meal in his life. His hair, black as her own but curly and so clean it shone with blue lights, was secured by a fine black bow into a little tail at the nape of his neck. His face was narrow and his features were not unhandsome, but his skin was whitened by an application of rice powder, making it look as soft and smooth as any female's. His frock coat, a deep bottle green in color, was of fine wool cloth. The waistcoat beneath it was blinding white, as was the frilled jabot at his neck. A ceremonial sword in a jeweled scabbard hung from his waist. His breeches were a light tan, very tight over the long muscles of his thighs, and his clocked stockings appeared to be made of silk. They were white, and spotless, which told much about how he had passed the hours of this day. His black leather shoes sported, of all things, two-inch-high red heels. This, then, was the secret of his intimidating height.

Caitlyn, passing by on the outside, pretended to stumble over a loose cobblestone. She fell heavily against the gentleman, her hands moving with practiced speed even as she mumbled an apology. Swift as a snake, her right hand slid into the pocket of his coat and emerged with a satisfyingly heavy purse. Then she reeled against him again as though she had not quite recovered her balance, while her fingers closed over his watch. A small smile curved her lips as she withdrew her hand. The English were ever as stupid as they were evil.

"Hold, now." The voice was quiet but steely enough to send shivers down her spine. It unnerved her more than the hard hand that closed like an iron band around her wrist. Holy Mary, she'd been nabbed!

"Run, Willie!" she shrieked. Willie's eyes widened as he took in her plight. He stared at her for a single wild instant, horror plain on his face. Then, with a high-pitched wail, he turned tail.

Caitlyn's last sight of him was a pair of kicked-up heels as he disappeared into the stream of quay workers.

"Let go!" Pulling frantically against the hard hand that imprisoned her, Caitlyn heard her heart pound out loud rhythms of terror. If she didn't get loose she'd hang. . . .

In a final, desperate bid for freedom she flew at her captor like an enraged gamecock, kicking his shins with the hard edge of her square-toed shoes and launching a mighty blow upward with her free fist that, had it connected with his nose, would likely have broken it. But he was tall and he jerked his head out of range, so that her fist only caught him a glancing blow on the neck. Still, it was enough to make him cough—and to tighten that imprisoning hand until the watch dropped from her numb fingers to clatter against the cobblestones and she was forced to her knees. It was all she could do not to whimper as he scooped up his watch and restored it to his pocket without easing that bone-crushing grip. Kneeling, white- faced with pain and burgeoning panic, she was nevertheless defiant as she stared up into that soft-no-longer face.

Caitlyn O'Malley asked for no quarter, ever.

"Call the constabulary, then, ye bloody Sassenach!" she hissed, defeated but still proud. His eyes narrowed at her. She saw that beneath thick black brows they were a strange combination of blue and green, almost aqua, with a circle of black around the irises. Shivering, she thought: Devil's eyes, and barely managed to refrain from making the horned sign with her fingers that warded off the evil eye. The only thing that stopped her was a refusal to let him see her fear.

"Don't fash yerself, lad; we'll not be turning our own over to a bloody Orangeman!" That low-timbred rumble came from the huskiest man in the small crowd of quay workers and their women that had gathered around them. Caitlyn, still on her knees, looked at the angry faces with renewed hope. Had she robbed one of them, they'd have shown her no mercy. But a Sassenach . . . ! She might cheat the hangman yet.