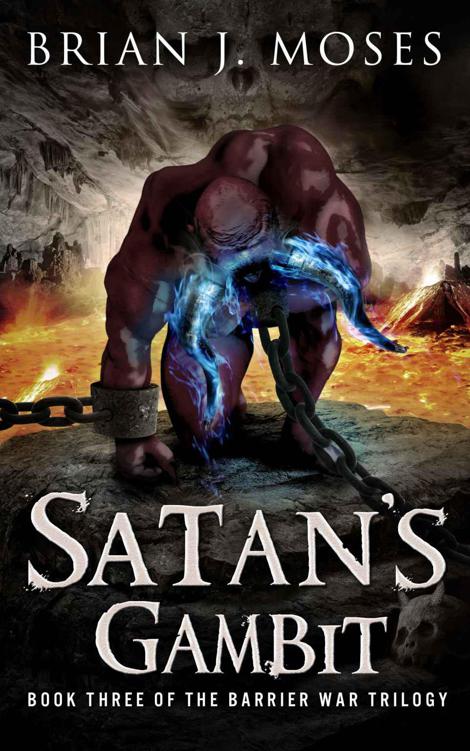 A Novel of the Pandemonium
War

for previews
and updates,

author’s commentary
on each book.

Other books by
Brian J. Moses

For my wife. Proof that some
men get better than they deserve.

For my boys. Every day they
teach me more about a parent’s love.

For Garet. I’m sorry, some
sacrifices are just harder than others.

Special thanks to the team
at
www.damonza.com
for the cover art.

Before Man encountered God – and Satan for that matter
– how did he know right from wrong? Good from Evil? What happened to his soul
when he died?

“I never saw who or what it was that killed me, but
it must have been one of the demons. That’s all it could have been. I was alive
one instant, and the next I was gone. Whatever it was, it was faster and
stronger than a man, and that means demonic. It makes sense, too, living in
Nocka as I do… did, I mean.
[1]

“I don’t blame
the guys for being wrong either. Danner and the others. I trained with them,
you know, got my cloak at the same time. Anyway, they said that while we hadn’t
won the war against the demons, Hell hadn’t come to overlap our world like we’d
always thought. They said it had passed us by and gone on to Heaven. Here, I
mean. Hell wasn’t trying to take over our world like we all assumed, it was
trying to get past us to assault Heaven. They were right about that at least.
I’ve seen that with my own eyes since I arrived. They were just wrong about the
demons, I guess.

“You see about
two months ago, when the demons destroyed the last of the Stones protecting us
and Hell passed by in that powerful instant of terror,
[2]
they told us there wouldn’t be any more
demons in the world. They’d all gone to fight the war in Heaven, see, and I
guess it seemed they were right. Certainly there wasn’t a bloody demon left in
the city that wasn’t a pile of black ash. During the war, groups of demons came
out of hiding all over the place in every region and every nation, but we didn’t
hear about them until after it was all over for us. They terrorized remote
communities and even a few good-sized cities for a few days, and they pretty
much had free run of things unless there happened to be a paladin nearby who
hadn’t made it to Nocka yet. By the time we heard about those incidents,
simultaneous reports were coming in from all over the countryside that those
demons were now gone. They upped and vanished as Hell passed by.

“Soon after, we
found out there were still a few pockets of demons left here and there, but
still less than the numbers we saw even before the war came. No one knew why
these were left behind, but they were pretty easy to clean out, and people
loved seeing us come by and vanquish the little beasties. People of every race
and in every land witnessed that horrifying moment of Hell transitioning
through our world, and we gave them a sense of hope and restored peace.

“Every day for
more than a month, we paladins were praised everywhere we went and hailed as
heroes to be remembered for all time. People assumed we won because we weren’t
all suddenly enslaved and living in Hell. San, after a few weeks of that, a lot
of us even sort of started to believe it. Winter slowly gave way to spring, so
even the weather seemed to agree that the worst was behind us. Who’s to say we
really hadn’t won, anyway? But Danner and the others with him all said no, it
was much worse than anyone possibly imagined, and even the Prismatic Council
agreed with them. So we all kept vigilant, even though there almost weren’t any
more demons, certainly no powerful ones, anyway.

“But what else
could it have been that killed me? You know? Nothing else has that kind of
power except an immortal, so it had to have been a demon, and a big one, too,
based on the glimpse I got before I died. So I guess we were all a little
wrong, and here I am in Heaven, fighting the war I began fighting on Lokka.

“Hey, some say
you traveled with Birch, that you were with his
jintaal
that went
hunting The Three. I can only imagine what that must have been like. That’s one
amazing man… an amazing family, really, him and his nephew Danner.

“After the war,
a lot of things were explained that we really didn’t know before. I mean, we
all saw Danner flying around with angelic wings sprouting from his back, and I
even hear tell he tore apart demons with his bare hands. But at the time we
didn’t know it was him, right? So afterward the whole story comes out, at least
to some of us paladins. Not everyone, I guess. It turns out he’s half-immortal,
son of a human thief and a female angel, and he’s got a lot of that heritage in
him. That was a sight to see him soaring around.

“Oh, you already
heard about some of that, I forgot. But his uncle? And the demon Kaelus? The
one called the Devil’s Deuce. That happened after you left us, brother. During
the fight, the enemy general shows up in person to break the last of those
angelstone monuments, and it turns out it’s Malith, one of our former brothers
who went White and left for Hell years ago. We were told he turned traitor
there, along with who knows how many of our former brothers. They’re all Black
paladins now. It was Malith who killed Gerard Morningham, then Malith was in
turn killed by Garnet, Gerard’s protégé. Poetic justice, that’s what I call it.

“But before
that… yeah, Malith also killed Birch. I swear by everything I hold holy, by the
Prism itself, I saw Malith ram his sword through Birch’s heart, and I saw him
die. He was down for quite a while, and there’s no way he was alive. Then
suddenly he gets up, and there’s this demon shape above him. Kaelus, we were
later told, a demon trapped in Hell who, if you can believe it, is actually
good instead of evil. Don’t that beat all? Next we’ll hear of an angel who’s
really doing evil.

“I’m kidding, of
course. Who’d ever want that? But I always thought it was an angel’s nature to
be good, and a demon’s nature to be evil. Guess even purely evil things can see
the light. Redeem the demons. Redeemons. Hah!

“At any rate,
somehow this demon brings Birch back to life, so I guess he’s good at that.
Turns out Kaelus has been hiding
inside
Birch this whole time,
possessing him and using him as some sort of host or something. That’s why his
eyes burn like they do, and I guess that’s why he’s got that gray cloak instead
of a normal color. No matter how good the thing is, having a demon living
inside you is bound to mess with things. I suppose Birch isn’t complaining
though, on account of him being alive now and all.

“What’s that? My
death? Again? I already told you, I don’t know what happened exactly, just that
it had to have been a demon. I was walking home – still in my armor, mind you –
I caught a glimpse of something huge out the corner of my eye, and
BAM
,
I was dead. No drifting slowly upward, no light in a tunnel, I just sort of
suddenly realized I was standing outside the gates of Heaven next to a dozen or
so of my brothers. There were a lot of other people there, all soldiers by
their look, and some of them I even knew. Jack and Talik were both really good
men, so I guess it makes sense they ended up here in Heaven. As for all the
paladins, I guess there wouldn’t be any other place for us to go. I doubt any
of us would go to Hell when we die, unless we were traitors like those Black
apostates. So I wasn’t too surprised that we were all there.