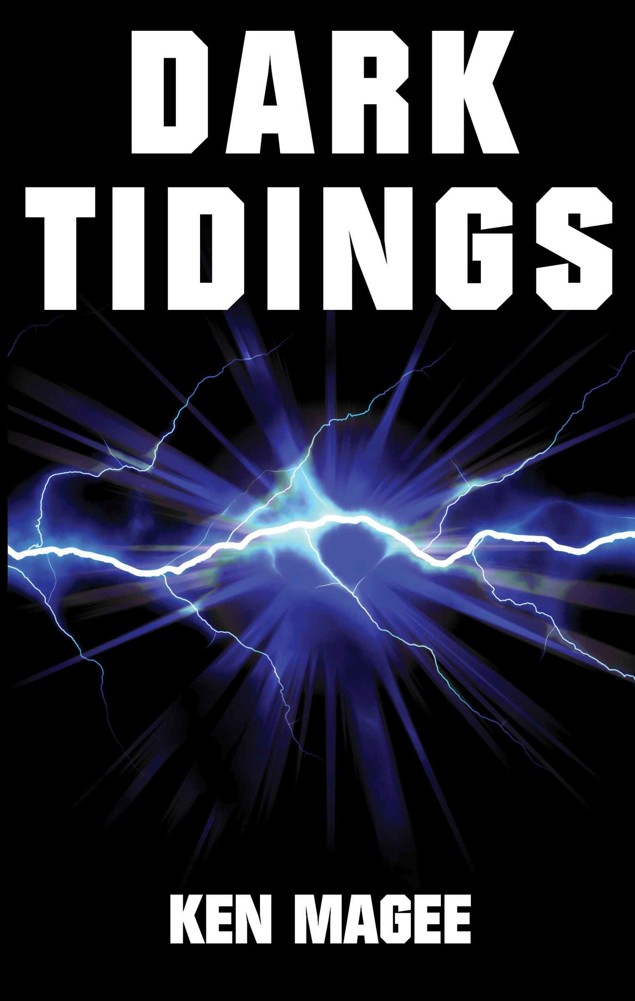 Book 1 of the ‘Ancient Magic Meets the Internet’ trilogy

All rights reserved. No part of this book may be reproduced or transmitted in any form or by any means without written permission of the publisher. All characters in this publication are fictitious and any resemblance to real persons, living or dead, is purely coincidental.

The right of Ken Magee to be identified as the author of the work has been asserted by him in accordance with the Copyright, Designs and Patent Act 1988.

To Carol, for putting up with the long hours… and years!

Also, big thanks to everyone who helped me get this story into print. In particular, Paddy for being the first to read it, Jenny for her enthusiasm about my efforts, Chris for keeping my technology ticking, and Daniel, Lewis, Allegra, Athena and Alexander for constantly reminding me that magic is real.

Chapter 1 - No Rest for the Wicked

Chapter 2 - A Not So Humble Opinion

Chapter 5 - A Spell of Trouble

Chapter 15 - You Are Chicken

Chapter 16 - Have a Little Faith

Chapter 22 - Here Be Trickery and Deceit

Chapter 23 - Get Thee Behind Me, Stan

Chapter 24 - Gone but Not Forgotten

Chapter 28 - The Morning After

Chapter 38 - The Great and the Good

Chapter 43 - In my Liverpool Home

Chapter 51 - Slipped Through the Net

Chapter 52 - Together at Last

Chapter 58 - Does This Make My Bum Look Big?

Chapter 60 - The Future Past

Chapter 61 - The Good Will Spell

We are on the verge of a global transformation. All we need is the right major crisis and the nations will accept the New World Order.
- David Rockefeller

Chapter 1 - No Rest for the Wicked

Way back in the medieval mists of time, long before most people counted which century was which, Tung shivered violently on the ice-cold, stone floor of the executioner’s dungeon.

Dark, dank and putrid were the words an unscrupulous property merchant might have used to glamorise this miserable dungeon, no words were hideous or nauseating enough to describe the true horror of this dreadful place. To be fair though, it wasn’t all bad, at least the green slime, which oozed like pus from small cracks in the walls, added some colour to the drab greyness.

Tung huddled in the darkest corner of the freezing, granite cell wishing he was dead. He wouldn’t have to wait long for his wish to come true because he was due to be tortured to death the very next day.
Roll on death, it couldn’t come a moment too soon. He was soaking wet, bruised, starving and parched with thirst. Yes, roll on death.

All he could do was pray for the merciful nothingness of sleep before the excruciating morning. He tossed and turned like an agitated foetus. How could anyone sleep in this frightful place? Hands over his ears, he tried to shut out the sounds of torturers’ hammers smashing bones, the heavy clunk of ratchets on the racks and the anguished screams which echoed forlornly down stone corridors. Rank stenches crept under the door to assault his nostrils, the acrid smell of flesh seared by white-hot branding irons overwhelming the other odours of human sweat, urine and excrement. Wails of despair reverberated inside his head. Did these evil tormentors never rest?

By some miracle, his brain dragged his racked body into an uneasy slumber. Praise the Lord for the gift of sleep, at least he still had this last sanctuary. His nightmares replayed his pathetic life as his subconscious tried to figure out how he’d ended up in this God-awful mess. The work of the devil, no doubt - with a little help from his fiends.

The dreams relived sixteen years of poverty, every day a struggle to find enough food to survive. His mother had battled relentlessly to try and stop his father from drinking and gambling away whatever meagre wage he had earned. She’d been drained dry by the futility of her efforts to turn beer-money into food-money. Most of the time, the family went hungry and, adding real injury to insult, a beating was the reward for anyone daft enough to complain.

Tung doted on his mother, so it broke his little heart when, just before he turned twelve, the will to fight for her kids deserted her, and she deserted them. She’d either died or run away, he never discovered which.

Without anyone shielding him from his father’s drunken wrath, the beatings increased in regularity and harshness. His childhood descended into a nightmarish hell of torment and deprivation. To make matters worse still, he’d heaped a couple of cartloads of guilt onto his tiny shoulders because he couldn’t protect his little sister from the torrent of paternal abuses. His father only brought pain into their lives. No support, no money and no food. Tung had become the man of the house and stealing was his only option to put meals on the table.

As he drifted in and out of sleep, his memory reconstructed his first theft, an event destined to determine how the rest of his life would play out.

He was a mere child, and his victim was a giant of a man whose purse bulged with gold and silver coins. He’d watched the man for weeks and resented how he seemed to have an endless supply of money to waste on fripperies. Resentment was to become an enduring theme in his life; resentment sprinkled with an unhealthy dusting of jealousy, spite and bitterness.

The sight of a fat man buying a gaudy hat at an up-market market stall wasn’t anything out of the ordinary, although there was something a little bit different about this fellow which piqued Tung’s interest. He followed him for the rest of the day and on many occasions after that, creeping in the shadows, always ten steps behind.

A pattern emerged. The man spent time and money in the market, then he ate and drank in the tavern before going to the big house where all the ladies lived. Now there was a mystery. Why did so many pretty ladies live in that place? It boggled his tiny imagination. What did they do? One thing was for sure, they enjoyed a steady stream of gentleman visitors, so they weren’t short of male role models. Unlike the young Tung who desperately lacked someone respectable and ethical to set his moral compass. His father wasn’t even a good example for the devil to follow. Actually, maybe the devil could have learnt a thing or two from him.

On the day of his first big heist, he tailed the man to the alehouse. Through grimy windows, he watched him devour mountains of meat and drink tankards of bubbly, brown liquid. The more he drank, the more careless he became, and on this particular evening a lot of tankards were being downed. Tung watched and waited.

The evening was drawing in by the time the man wobbled out of the tavern. Staggering and stumbling, he took his usual shortcut through the dark entry which ran along one side of the tavern. Halfway down the entry Tung sprung. He raced past the man at full speed and grabbed the purse dangling from the man’s trousers. Unfortunately, the purse didn’t break free, so Tung’s body came to an abrupt halt while his feet kept running, flailing into the air. A ridiculous and hilarious sight for an uninvolved bystander, of which, in that deserted alley, there were of course none.

Tung’s momentum and aerial acrobatics broke the leather tether and the purse tumbled to the cobbles, spilling its contents everywhere. The shock, aided and abetted by ten pints of ale, upended the victim, so he too lay sprawled on the cold stone, flapping around like a beached whale. Man and boy gawked at each other and, for an eternal split second, neither knew quite what to do. The man’s glazed eyes gazed at Tung in bewilderment. Tung seized the moment, and the purse, and sprinted off into the darkness. He ran and ran until he was as far away as his little legs could carry him, and then he ran some more. His ears throbbed to the hammering beat of his heart. Would it burst through his chest before or after his lungs exploded? He had to stop. He had to hide. A pile of rotting sheep carcasses dumped in the market square provided the perfect spot. He crawled into the middle of the woolly mound and collapsed in a heap, sucking in lungfuls of rancid air.

He caressed the soft, brown leather purse. It wasn’t bulging any more, having selfishly emptied itself at the crime scene. Damn it. His shaking fingers explored every corner of the purse and there, hiding right at the bottom, was a single lepton. It was the lowest denomination of all coins, but it had some value, albeit tiny.

The cell door burst open without warning. His dreamlike memory panicked and fled into the ether, the night’s silence vanished as the rusty hinges squealed and screeched. A grey-bearded, old man was catapulted into the room. He double somersaulted across the stone floor and landed upside down on top of Tung.

“You’ll fester in hell for this, you snivelling toadies,” the old man bellowed at the now-bolted door. The door didn’t reply. He shouted a few more obscenities before noticing someone else was in the cell.

Tung watched the old man’s face redden as embarrassment spread across it. The man adjusted his position to a semi-upright slouch, brushed the worst of the dirt off his robe in an undignified struggle to regain his composure and cleared his throat.

He straightened his back as he spoke. He waited for a reaction, but his opening line had been met by a silence stony enough to make any mountain justly proud. With blank eyes, Tung stared at the stranger, mouth agape. Surely this can’t be happening?

The old man placed a bony hand on Tung’s shoulder and shook him. To his horror, Tung realised this was a real nightmare and not a dream.

“I am Madrick,” the old man repeated. “I am the Royal Wizard, by appointment to the King.”

Tung’s exhaustion left him barely able to form a response, but somehow he managed. He punched Madrick hard, square on the forehead. Bang. How do you like that, old man?

Madrick fell backwards, the look on his face revealing the pain which jarred every nerve in his head, but he didn’t take the hint. He rubbed his bruised brow and prodded Tung with his foot.

“I may be able to help you escape from this dreadful place, but only if you listen very carefully to what I have to say.”

Madrick straightened a little more, his eyes brightened and a small smile curled across his lips. Here comes a story, thought Tung, and he was right.

Silenced by Natasha Larry
The Bonded: The Allseer Trilogy Book I by Kaitlyn Rouhier
Only Beloved by Mary Balogh
Treason by Newt Gingrich, Pete Earley
Henry Cooper by Robert Edwards
Snowed In by Piork, Maria
The Middle Age of Mrs Eliot by Angus Wilson
Locked and Loaded by Mandy Baxter
Jackson Jones and Mission Greentop by Mary Quattlebaum
The The Name of the Star by Maureen Johnson
Our partner