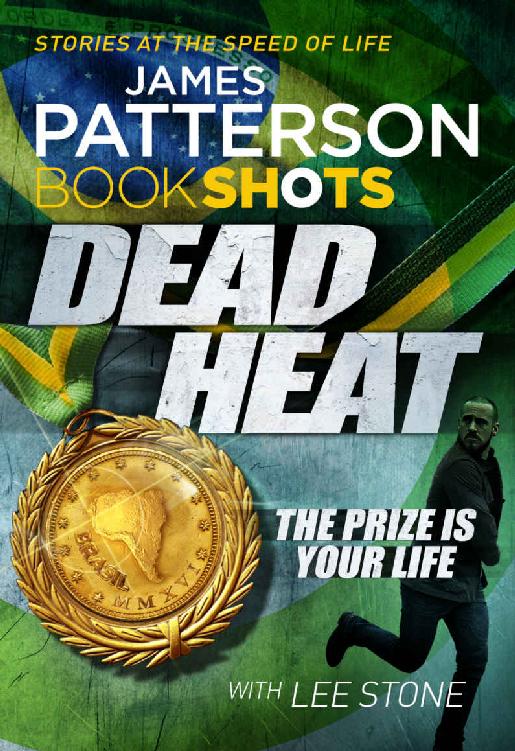 Read on for an extract from
Chase

It’s the day of the opening ceremony of the 2016 Olympic Games in Rio and excitement is at fever pitch.

But a key athlete has gone missing and Detective Rafael Carvalho, on the brink of retirement, is assigned the case.

When the athlete suddenly appears at the ceremony, it seems the case is solved. But Carvalho soon discovers that he has returned with the deadliest of intentions.

JAMES PATTERSON
is one of the best-known and biggest-selling writers of all time. His books have sold in excess of 325 million copies worldwide and he has been the most borrowed author in UK libraries for the past nine years in a row. He is the author of some of the most popular series of the past two decades – the Alex Cross, Women’s Murder Club, Detective Michael Bennett and Private novels – and he has written many other number one bestsellers including romance novels and stand-alone thrillers.

James is passionate about encouraging children to read. Inspired by his own son who was a reluctant reader, he also writes a range of books for young readers including the Middle School, I Funny, Treasure Hunters, House of Robots, Confessions and Maximum Ride series. James is the proud sponsor of the World Book Day Award and has donated millions in grants to independent bookshops. He lives in Florida with his wife and son.

STORIES AT THE SPEED OF LIFE

What you are holding in your hands right now is no ordinary book, it’s a BookShot.

BookShots are page-turning stories by James Patterson and other writers that can be read in one sitting.

Each and every one is fast-paced, 100% story-driven; a shot of pure entertainment guaranteed to satisfy.

BookShots – the ultimate form of storytelling.

From the ultimate storyteller. 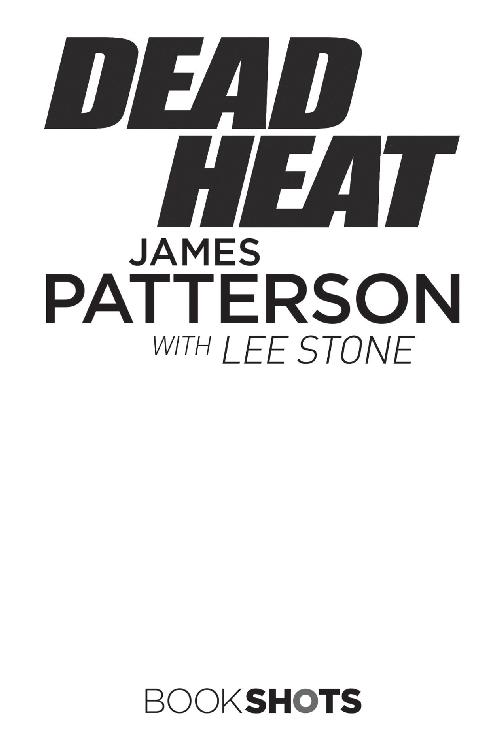 FOR THIRTY-NINE LONG
years, the telephone on Juliana’s side of the bed has rung out in the middle of the night, the same way it is ringing right now. Juliana has never complained. Not one time. Whenever it happens, she just hands me the receiver, and tells me not to get myself killed.

The phone is on Juliana’s side of the bed because there is nothing on my side except a wall. I earn a cop’s wages, and we live in a house the size of a shoebox. I roll over and press the tiny button on my black plastic Casio and it lights up. 4 a.m.

‘Carvalho?’ Vitoria Paz, my partner for the past two years, is the voice on the end of the line.

I grunt. My bones hurt.

‘Everyone hates to wake me,’ I tell her. ‘That’s why they always wake you first.’

I hear her sigh, but I know she’s smiling.

‘I’ll be at your place in five minutes.’

She’s talking out of the side of her mouth because she’s smoking. She smokes a lot. Paz is twenty-six years old and tough as nails.

I pull on socks in the dark. I’m an expert at this.

‘Won’t they still be missing after I’ve had a decent night’s sleep?’ I hear Paz take another drag on her cigarette.

‘The missing guy is an athlete,’ she says. ‘So you know how that goes at the moment.’

I know exactly how that goes. The Olympic Games officially open in a few hours’ time, and the world’s media are in Rio. Actually, the whole world is in Rio. And everyone, from the President down, is nervous.

‘How long has this athlete been gone?’

‘Twelve hours,’ Paz says. ‘Get some coffee down your neck – you sound irritable.’

I put the phone back on the beaten-up dresser as quietly as I can, but I hear Juliana stir.

‘Rafael,’ she says. ‘Don’t get yourself killed.’

I promise her that I won’t, and I listen to her breathing soften. As Juliana slips back into her dreams, I use the blue backlight of the Casio to guide me out of the bedroom and down into the kitchen. I set the kettle on the stove and pull my badge and gun from the cupboard above the refrigerator. Soon Paz’s headlights wash through the kitchen window and I get a first glimpse of myself in the mirror. I look crumpled. My hair is longer than it should be; still mostly brown, but greying at the temples. I haven’t shaved for two days and I’m wearing yesterday’s shirt. It’s fair to say I’ve looked better.

Behind the wheel of her tiny Fiat, Paz looks fresh. The car reeks of smoke as I get in. It’s warm out, and Paz is wearing a tight black vest and jeans. Paz runs three times a week, boxes at a local gym and benches one hundred and forty pounds. She hides her strength and grit behind a perfect white smile, sparkling brown eyes and a mop of black hair, which frames her face in tight spirals.

‘Better than you, by the looks of things.’ I smile.

‘That’s not saying so much.’

Paz pulls slowly off the drive and doesn’t hit the accelerator properly until we’re out of earshot of Juliana. Paz swears like a bartender and smokes like a chimney, but whenever she is around my wife, she acts like an altar girl on her way to church. Soon enough, though, she puts her foot to the floor and I’m holding on to my scalding coffee with calloused fingers, hoping to Christ that she doesn’t hit a pothole and scar me for life.

‘Do you have to drive quite so fast? I’m two weeks off retirement and I’d like to get there alive, if it’s all the same to you. It’s a missing-person case, not a shootout.’

Paz smiles. She loves it when I’m grouchy. She has one hand on the wheel and is using the other to cram a new cigarette into her mouth, before flicking a steel Zippo to light it.

‘The missing athlete is Tim Gilmore,’ she says. ‘Have you heard of him?’

I have an image of Tim Gilmore in my head. He’s Australia’s poster boy, and I’ve seen the pictures of him on billboards and adverts around the city. He’s blond, tanned and tall.

Paz nods as the cigarette catches. Her eyes narrow against the smoke, making her look like a Mexican bandit scanning the horizon for trouble.

‘Yeah. He’s their team captain, too,’ Paz says, taking another drag. ‘Twenty-seven years old. It’s his second Olympics. He’s got a strong chance of a medal. At least he would, if anybody knew where he was.’

We pass rows of houses as the tiny Fiat speeds across the city. My free hand, the one that isn’t holding the coffee, is holding on to the edge of the seat. The fabric has worn through over the years and exposed the foam underneath. There’s a hole where Paz’s five-year-old boy Felipe has been picking away at it with his tiny fingers. He’s the only person who sits in Paz’s passenger seat more often than me. Each time I get into her car, the hole in the foam is bigger.

‘Felipe’s like a moth in a wardrobe,’ I tell her. ‘This seat’s going to disappear eventually.’

‘Gilmore trained late yesterday afternoon,’ she says. ‘But he never showed up to eat with his team in the evening. He’s not answering his phone, either.’

‘Late afternoon?’ I push the blue backlight on my watch. ‘That’s only twelve hours ago.’

‘I know,’ Paz says as she winds down the window and flicks out her cigarette butt. ‘Makes you wonder why they’re so twitchy, doesn’t it?’

‘Get used to it,’ I tell her. ‘It’s gonna be like the World Cup all over again. Everybody is going to be watching their backs and covering their behinds for the next two weeks, and if anything goes wrong they’ll go ballistic.’

Suddenly Paz slams on the brakes and we come to a stop with a tyre screech loud enough to wake a city block. I look at her side-ways as I swill down the last of my coffee and put the cup on the dashboard.

‘Was that really necessary?’

We park up on Rua Carioca, surrounded by thirty-one high-rise blocks full of the world’s most talented athletes. Nearly four thousand flats. New coffee shops, flower shops and post offices have sprung up on every corner. But right now, everything is closed and deserted.

She is right. The air is still and the lights behind the thousands of windows are almost all turned off.

‘Athletes love to sleep. It’s one of the few things I have in common with them these days. Come on.’

Gilmore’s coach is waiting for us in the lobby.

‘Hunter Brown,’ he says in a broad Aussie accent. He has a firm, dry handshake and bright, attentive eyes, just the right side of furtive.

‘Carvalho,’ I say. ‘And this is Detective Paz.’

Brown shakes his head. I frown as we walk over to a couple of sofas at the far side of the lobby. Hunter Brown looks away, composing his thoughts.

‘I get it,’ he says. ‘You probably think I’m overreacting.’

‘Listen. Tim has trained for four years for this event. He wouldn’t run out on us now. Not unless something is very wrong.’

‘Has he ever gone missing before?’ Paz asks.

‘Too right,’ Brown says. ‘They can knock on your door any time, demanding urine and blood.’

The Choices We Make by Karma Brown
Wings of the Morning (Kensington Chronicles) by Lori Wick
Off the Edge (The Associates) by Crane, Carolyn
The Edge of Honor by P. T. Deutermann
Others by James Herbert
The Only Boy For Me by Gil McNeil
ROMANCE: ALIEN ROMANCE: Enemy Lines (Shapeshifter Alien Invasion Abduction Contemporary Romance) (Science Fiction Romance with Alien Invader) by Anna Collins
Adventurous Me by Deanndra Hall
Undeliverable by Rebecca Demarest
Infinity by Andria Buchanan
Our partner