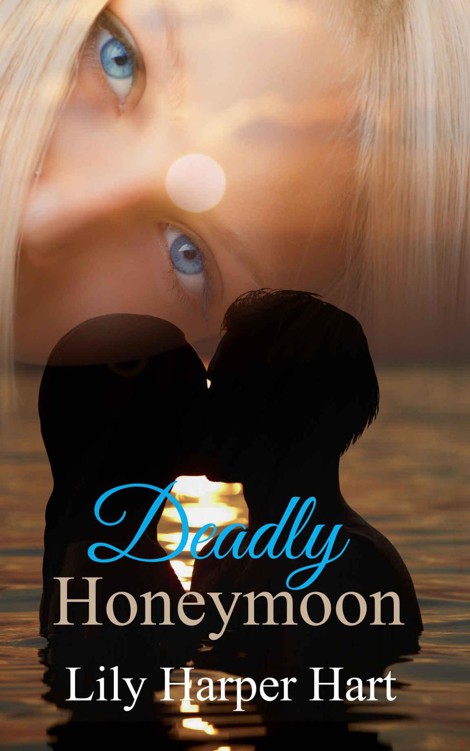 James Hardy rolled over, taking a few seconds to get his bearings. The sun was bright on his body, the breeze warm on his skin, and the smile on his sleepy face was content and self-satisfied.

Then he realized that he was alone in the bed. Mandy was gone.

He sat up, running his hand through his brown hair and glancing around the room curiously. He kept the tangled sheet around his waist as he considered the day ahead of him.

As far as honeymoons go – and he had nothing to use for comparison – this one had to be the best ever. He’d surprised his new bride with a two-week trip to Bermuda, renting a house with a private beach and ocean access. So far, the duo had enjoyed sun, sand, and rampant nudity every chance they got.

That’s why he was surprised to wake up and find that his blonde wife – he was still getting used to calling her his wife, but in a good way – wasn’t slumbering beside him.

James stretched, climbing out of the bed and looked toward the open sliding-glass doors that separated the bedroom from the ornate terrace. Since he lived in a suburb of Detroit, the notion of leaving a door open (where anyone could just wander in) hadn’t sat well with him when they first arrived. Mandy had begged, though, the idea of making love with the sound of the surf pounding just outside weaving a romantic tapestry in her busy mind.

James couldn’t refuse her – not that he would ever want to.

Now, he was almost used to it, and he had to admit that he was going to miss the soothing waves infiltrating his dreams when they left. Still, they had several days of fun and frolicking in front of them, and he wasn’t going to fixate on returning to the real world until he absolutely had to.

James tugged on a pair of boxer shorts and walked out to the terrace, expecting to find his spectacular blonde sitting in one of the chairs and enjoying the morning with a cup of coffee. With any luck, she’d be naked, or wrapped in a simple blanket. Since they’d spent every morning this week out there together, he figured it was the best place to start looking for her – but she wasn’t there.

James frowned. For a moment, he worried that something had happened to her. He was being silly, he told himself. Just because trouble found them frequently in Southeastern Michigan, that didn’t mean it would in Bermuda. Still, after almost losing Mandy the day before he got a chance to marry her thanks to a gun-wielding madman, James wasn’t taking any chances.

He listened, but no one answered.

James sighed when he heard her voice, although he still hadn’t managed to capture a glimpse of her in her morning glory. She hated her after-slumber bedhead with a passion, but he was particularly fond of it. She always looked beautiful, but the sight of those tousled blonde locks framing her sleepy face always accelerated his libido into overdrive.

James peered over the edge of the balcony, smiling when he found her sitting in the sand and building a castle. Her hair was in a simple ponytail, which allowed him to get a good look at her beautiful features. Since they’d arrived in the land of sun and fun, she’d barely worn any makeup – and that’s the way he liked her best.

“Nope,” Mandy said. “You’re my gentleman in waiting. We have to be careful when we have sex, because I don’t think my husband the king is going to approve.”

James searched his brain. “Isn’t that the dude who plays Daryl on
The Walking Dead
?”

“Don’t worry, you can poison him and win my heart. My romance with Norman is only fleeting.”

James smirked. “I’ll be down in a second. Do you want coffee?”

When James joined her a few minutes later, he handed her a steaming mug and then settled into the sand next to her. “You just had an overwhelming urge to leave me naked in bed and come down here and build a sandcastle?”

Mandy shrugged, her blue eyes sparkling. “I don’t know what it is about this place,” she admitted. “I just wake up early and … invigorated.”

“I had a few other ideas for invigorating you this morning,” James teased, leaning in and brushing a soft kiss against her jaw.

“I didn’t want to wake you up,” Mandy replied. “You were sleeping so soundly. You never get to really sleep at home. We’re always having one crisis or another. I like seeing you so well rested.”

James ran his eyes over her lithe body, taking in her string bikini and bronzed skin with barely disguised lust. “You could’ve woken me up.”

Mandy wrinkled her nose. “Why? We’re on our honeymoon.”

“So we could do honeymoon things,” James said, slipping his hand beneath one of her bikini triangles and cupping her breast reverently.

“You don’t
need
to do it,” James agreed. “I just thought it would be the perfect way to wake up. Instead, I found my bed empty and my wife missing.”

“Oh, you’re such a worrier,” Mandy scoffed. “I would never wander too far away from you.”

“Have you seen how hot you are? I could never find someone as hot as you again.”

“Not even Norman Reedus?”

“Alas, even my beloved Norman can’t hold a candle to you,” Mandy said, wiping a smudge of wet dirt on his cheek with her index finger.

James caught her hand and tugged, pulling her closer to him. “Come here, wife.”

“Are you going to call me wife now instead of baby?”

“Does it bother you?”

Mandy shook her head, her blonde ponytail bobbing. “No. I like it. I just miss being called baby sometimes. It always made me feel all warm and gooey inside when you said it.”

“You never told me that,” James said, pressing his lips against hers softly.

“I shouldn’t have to tell you everything,” Mandy said. “Remember, you’re my gentleman in waiting. I’m the queen.”

James smirked, removing the cup of coffee from her hand and placing it on the step next to them before tipping Mandy over so she fell backwards and crushed her castle.

“Hey,” she protested. “I spent an hour working on that.”

“I’m going to spend an hour working on you,” James said. “I overthrew the castle. I’ll build you a new one later.” He crawled over her, resting his strong body against her slight frame. “As the conquering party, I shall be the new king.”

“Does that mean you’re going to boss me around?”

James tugged Mandy’s small bikini bottoms off and tossed them to the side, running his hands over her toned thighs with a small sigh. “Yup.”

Mandy bit her lip and glanced around nervously. “We’re outside.”

“What if someone sees?”

“Why do you think I rented a house with a private beach?”

“Shh,” James said, running his tongue down Mandy’s sensitive neck. “You didn’t seem to have a problem when we did it on the terrace last night.”

“That’s because it was dark,” Mandy said, sucking in an excited breath as James untied her bikini top and pulled it over her head. She was completely bare now.

“Yeah, but you were loud enough to wake the dead,” James said, lowering his head and sucking her hardened nipple into his mouth. He ran his tongue over the pebbled nub, relishing the way her body responded to his every touch.

“That was your fault,” Mandy gasped. “You did that thing – you know that drives me crazy.”

“I do,” James said, moving his mouth to her flat abdomen and kissing his way down. “That’s why I’m going to do it again.”

“James,” Mandy moaned, biting her lip. “We should go inside.”

James ignored her, pushing her thighs wide and moving his head between them. He pursed his lips, blowing onto her sensitive mound and causing her to writhe excitedly. He slipped his tongue between her folds and licked experimentally, holding her thighs tighter as they flexed.

He attacked her with enthusiasm, relaxing into his task as he felt her hands travel down and tangle in his hair, massaging his scalp. It didn’t take long until he felt the familiar jerk in her hips that signified she was cresting a ferocious wave.

“James,” Mandy cried out, arching her back as release found her.

James kissed the inside of her thighs when he was done and climbed to his knees, pulling his boxer shorts down as he moved back up her body. He captured her mouth with his, swirling his tongue against hers and cupping her head as he pulled her into a more comfortable position.

He slipped his free hand under her rounded rear, tipping her up so he could gain entrance without dragging half the beach with him. She fit him like a glove, her moist warmth gliding over him. He opted for a slow and lazy rhythm, taking time to enjoy the feeling of her body as she wrapped herself around him.

Her thighs rose up, resting on his hips as she crossed her calves around his narrow hips. Her hands moved down his strong back, digging into his warm skin as the sun beat down on their joined bodies.

“I love you, wife,” James said, pumping his hips.

“I love you,” Mandy said, pulling back far enough so she could see his heavy-lidded eyes. “I really love you.”

James ground himself against her pelvis in a circular motion, ratcheting up her fervor as another orgasm started to build. They jumped the chasm together, their euphoric cries mixing together as the waves crashed against the beach a few feet away.

James rested his body on top of hers, pressing his lips to the soft skin that resided in the hollow of her neck. “How was that, my queen?”

James propped himself up on his elbow, leaning over to the side slightly. That’s when another sound assailed his ears. He shifted his attention to the ocean in front of the house, his gaze landing on three surfers sitting on their boards about fifty feet into the surf.

“That was awesome, man!” The surfer in question pumped his fist enthusiastically.

“That chick is hot,” the final surfer chimed in.

James glanced down at Mandy, her cheeks flushed with embarrassment. “At least you’re hot, baby.”

“You’re going to pay for this,” she mumbled.

“I’m looking forward to it.”