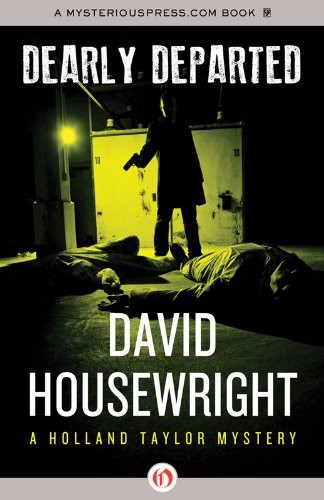 The woman’s words send an icy chill through Minneapolis private
investigator Holland Taylor: “If you are listening to this now,” she
says, “it is because I am dead.” Speaking calmly, Alison Emerton
explains that if she is missing, it is because Raymond Fleck killed her.
Fleck, a convicted rapist, lost his job at a humane kennel after Alison
accused him of sexual harassment and stalking. The threats began soon
after, prompting Alison to buy a gun and record the tape. She vanished
soon after, leaving behind her wallet, coat, and boots, on a night when
twenty-three inches of snow fell on Minneapolis.
Seven
months later, her lawyer hires Taylor to find the missing woman. As
Taylor digs into Alison’s past, he learns that Raymond Fleck was not the
only person who wanted her dead.

W
hat I remember most was her voice. It was strong and clear and totally unafraid, even though the words she spoke gripped my heart with two icy hands:

If you are listening to this now, it is because I am dead.

At first I didn’t want to listen. I did not know the voice, had never heard the name that went with it. But I knew the man who had invaded my office, who now stood in front of my desk, a stumpy index finger pressed hard against the play button of a cassette recorder, and it was all I could do to keep from knocking him to the floor and beating him about the head and shoulders. Hell, if there had been a wooden stake handy, I would have gladly driven it through his heart.

H
unter Truman was a man who preferred what Winston Churchill called “short, Anglo-Saxon words,” words usually reserved for those moments when you hit your thumb with a hammer or stub your toe in the dark. He used them frequently. Probably the only words he used more often were these: “I’ll sue.”

Truman was an attorney, a fact that might have pleased his mother but few others. He took bragging pleasure in the sixty-some civil lawsuits he had filed on his own behalf over the past ten years—more if you added all the spin-off countersuits. Most were frivolous. The rest were vindictive and vengeful. He didn’t care if he won, only that he crushed his victims with legal fees— a problem he didn’t have since he always represented himself. I hadn’t known this several years ago when I met Truman, and although I was still struggling to make a go of my detective agency back then, I like to think it would have made a difference.

At the time, Truman had insisted that enemies of a client he declined to identify had attempted to run him down just that morning. He gave me a description of the car and the first three digits of the license plate, then hired me to learn who had driven it. By late afternoon, I discovered that the car was owned by a middle-aged couple living in the Kenwood neighborhood of Minneapolis but usually driven by their teenage daughter. I also discovered that while several people might have wanted Truman dead, no one was actually trying to kill him. And he had known it. He had merely wanted the information I provided so that he could sue the teenager’s parents for one hundred thousand dollars in punitive damages for having an “out-of-control” daughter. The teenager’s crime? She had flipped him the bird when Truman cut her off on a downtown Minneapolis street so that he could claim a prime parking spot in front of the Federal Court Building.

Armed with the information I had gathered for him, Truman dragged the parents through the court system, vowing that if they wouldn’t control their daughter, then—bigod!—he would. Eventually he lost the suit and was ordered to pay the parents a two-hundred-and-fifty-dollar judgment. Meanwhile, the parents had burned several thousand dollars defending themselves.

I hadn’t liked being used so badly. Nor had I appreciated his lying to me. But I probably would have forgotten all about the incident if Truman hadn’t tried to pull the same crap a couple of years later—this time with me as his designated victim.

I had just worked a case involving credit card fraud. A man had been contacting grieving widows. He’d get their names from the obituaries and call them and offer to switch their credit cards from their husbands’ names to their names. All they had to do was provide him with the credit card numbers and expiration dates. And soon they would start receiving bills for televisions, stereos, microwave ovens, and airline tickets that they hadn’t purchased. I had been drawn into the case by an older woman who didn’t think the authorities were giving it enough attention.

It turned out the caller was an inmate at Oak Park Heights state prison. He had been using a pay phone to gather the credit card information and then sell it to accomplices on the outside. When confronted with the crime, the inmate grinned and said, “Don’t shoot, I give up.” He’d treated it all like a hoot—and why not? After his conviction, he drew a sentence that was to be served concurrently with the sentence he was already serving. He didn’t lose so much as an extra day of freedom. Meanwhile, the money gleaned off the scam was pulling interest in a mutual fund somewhere.

Only that wasn’t good enough for Truman, who had defended the lowlife. Annoyed because he couldn’t shake my testimony on the witness stand, he sought revenge by bringing me up before the Private Detective and Protective Agent Services Board, claiming I had abused my license, stating specifically that I had “engaged in fraud, deceit and misrepresentation while in the business of private detective.” However, on the morning of the hearing, Truman withdrew his complaint—although not his claims—and the matter was dropped. But not before it had cost me several sleepless nights and the expense of hiring my own attorney.

When chance and the Minnesota Timberwolves put us at the same concession stand a few months later, I confronted Truman with a few well-chosen Anglo-Saxon words of my own and told him if I ever saw him again, I’d shoot him. He said he was going to sue me for defamation and assault but apparently found something else to become hysterical over because he never did.

Now he was in my office, and I found myself regretting that I’d stopped carrying a gun.

He set a battered briefcase on the floor, straightened slowly, and said, “I need your help.” He looked it, too. I had never seen anyone who appeared as sorrowful or as dejected as Truman did outside a cancer ward. His hair was tangled from running his hands through it, and he had little patches of beard where he had shaved not too carefully. His eyes were bloodshot and tired. He looked defeated. It was because of that look that I didn’t throw him out. But, then, I didn’t invite him to sit down, either.

“Let me guess, the Office of Lawyers Professional Responsibility pulled your ticket,” I said.

“Fuck, no. Why would they do that?” Truman answered without much enthusiasm.

Truman didn’t reply. His eyes locked on an empty corner of my desk blotter, and for a moment he reminded me of a lawn ornament, one of those sad-eyed ceramic deer that people stick in their front yards.

“You have thirty seconds to tell me what you want,” I said.

Truman’s woeful demeanor didn’t last long. “Thirty seconds, what’s that shit?” he wanted to know in a voice that started low and increased in volume.

Truman must have figured out I was serious because at fifteen seconds he said, “I want you to find a woman for me.”

“Try Lyndale and Lake Street; the girls who wave at passing cars are usually the most reasonably priced.”

“Jesus H. Christ. This is serious.”

In five seconds, Truman whipped a photograph out of his pocket and set it—ever so tenderly—in front of me. It was of a woman who looked like she should be advertising perfumes with dangerous-sounding names. She wasn’t beautiful, exactly. Her hair was dark and so were her eyes, but her chin was too sharp, and her nose had a slight hook to it. Yet she had a presence, a confidence, that a camera could not diminish. Or perhaps the camera lent it to her—what did I know? I guessed her age at twenty-five.

“The police think she was murdered,” Truman said.

That bought him an extra minute.

“What do you mean, they think?”

“Shit, the assholes can’t find her body, and they can’t find any conclusive fucking evidence of foul play.”

I was puzzled and probably looked it.

“Listen to what I’m saying,” Truman commanded. “The last time anyone saw her, she was leaving her office Halloween night. Remember that goddamn snowstorm?”

I remembered it well. Twenty-three inches of snow fell within twelve hours, and my snow blower wouldn’t start.

“Her husband comes home, and she’s not there. But here’s the thing: Her car was in the garage, her coat and purse were on the chair where she usually left them, and the front door was open. I don’t mean unlocked, I mean open.”

“Maybe she went out for a pack of cigarettes and kept on going. It’s been done before,” I volunteered.

“In a snowstorm? Without her coat or boots? Without her fucking purse, her credit cards, her checkbook, her cash? Listen to what the fuck I’m saying! The cops thought she might have left, too, but changed their minds because nothing was missing from the house. No clothes, no jewelry, no nothing.”

“Did the police sweep the house?”

“Shit, yeah. They didn’t turn up jack. No sign of forced entry, no physical evidence, no witnesses. Christ, if they knew what the fuck was going on, you’d think I’d be standing here?”

I reached across the desk, grabbed a fistful of silk tie, and jerked it toward me. “You utter one more obscenity in my presence, I’ll wash out your mouth with soap,” I snarled. It was a good snarl, too—I practice it in front of a mirror.

He started to utter one of the seven words banned from network television, gulped when I yanked his tie, then nodded.

I released his tie. It’s not that I’m particularly offended by obscene language. I’ve been known to mutter a few four- and seven-letter words myself. But Truman was beginning to annoy me, and since I didn’t like him in the first place, I saw no reason to put up with his vulgarity.

“You’re a straight shooter; I respect that,” he told me. “A conscientious guy.”

“Sure,” I replied sarcastically to the hollow compliment.

“That’s why I’m here,” he continued. “I know you didn’t like it when I dragged you in front of the board, but I was protecting the interests of my client; that’s what lawyers do. If other people get hurt along the way … Hey, don’t blame me, blame the system.”

“No, listen, this is important.”

Blue Bloods: Keys to the Repository by Cruz, Melissa de la
Rowing Against the Tide - A career in sport and politics by Brandon-Bravo, Martin
Ache for You (Trapped in Three Hill Book 1) by Beaudet, Nancy
Hidden Summit by Robyn Carr
Stone of Vengeance by Vickie Britton
The Nothingness of Ben by Brad Boney
The Tent: A Novella by Burke, Kealan Patrick
The Weight of the World by Amy Leigh Strickland
Bloodroot by Bill Loehfelm
Zero to Hero by Seb Goffe
Our partner