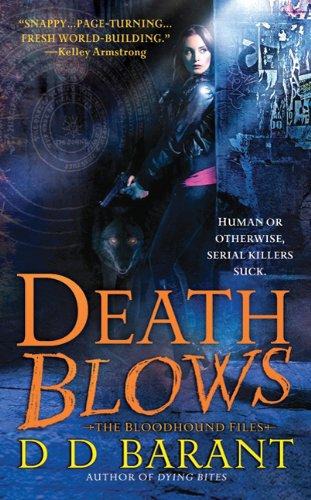 SUMMARY:
Imagine a world where only one percent of the population is human, and the rest are vampires, lycanthropes, and golems. Now imagine hunting down killers in this world. These are The Bloodhound Files…DEATH BLOWS FBI profiler Jace Valchek was pulled into this parallel realm to hunt for Aristotle Stoker, a human serial killer who preys on vampires and werewolves. Now she works for the National Security Agency of the Unnatural States of America—and her boss is a vampire. At a bizarre crime scene, Jace finds a bloodsucker murdered by magic, fried to the bone and dressed in the costume of the comic book hero the Flash—a character who isn’t supposed to exist here. Comic books have been outlawed for their powers, including crossover spells like the one that transported Jace to this world. Soon, she’s following a trail of dead bodies into the sinister underworld of black-market comics—where a deranged madman gives new meaning to the term “super-villain”…“Engrossing… Jace is remarkable, strong-willed and smart, and she sets an unstoppable pace.”—Publishers Weekly (starred review) 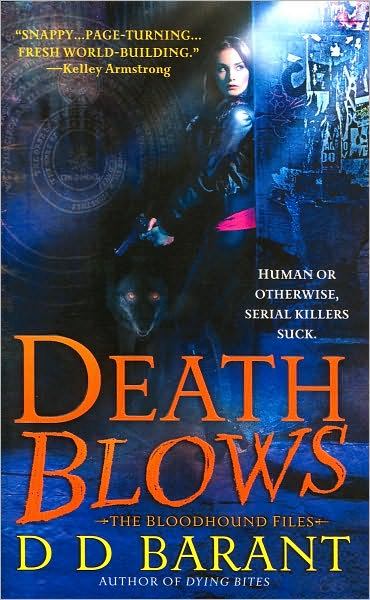 Men of the Otherworld
and
The Awakening

“
Dying Bites
is wacky, unpredictable, fresh, and amazing. I would kill to write as well as DD Barant. Seriously.”

“This engrossing debut adds another captivating protagonist to the urban fantasy ranks. . .Barant’s well-developed world offers intriguing enhancements to mythology and history. Jace is remarkable, strong-willed, and smart, and she sets an unstoppable pace. Look for the Bloodhound Files to go far.”

“A heroine with plenty of guts, moxie, and a sense of the absurd. [A] fresh and original take on urban fantasy. . .Huge kudos to Barant for spicing things up with a story that expertly integrates detective work, kick-butt action, and a wacky sense of humor. Make sure you get in early on the outstanding new Bloodhound Files series.”

“DD Barant builds a strong world and fills it with fascinating characters that will delight and entertain.
Dying Bites
is a well-written urban fantasy with a gripping plot and a heroine who is quite believable with her very human flaws. I’m looking forward to seeing more in this captivating world.”

“Five stars. An exciting new series. It has humor, mystery, and adventure. A great book!”

“Barant does an excellent job introducing a whole new world where vampires make up the majority of the population. . .quick and engrossing. . .a great new series.”

NOTE
: If you purchased this book without a cover you should be aware that this book is stolen property. It was reported as “unsold and destroyed” to the publisher, and neither the author nor the publisher has received any payment for this “stripped book.”

On the day I write this, my dear friend Jeanne Robinson goes to her first session of chemotherapy. A few days ago her friends and family threw a benefit to help defray costs of treatment, and the item I donated to the auction was the choice to either appear as a character in this book or the right to dedicate it to whomever you chose. Stevie McDowell won the bid, and her dedication appears below.

For Jeanne Robinson, someone who I am proud to call my friend. Jeanne has managed to touch so many people during her years as a dancer, choreographer, Soto Zen monk, author, wife, mother, sister, daughter, and friend. A lifelong artist and whirling vortex of organizational energy known as Wired Buddha, Jeanne is a fearless and fierce champion to her friends and family as well as all others who are lucky enough to enter her sphere. Jeanne Robinson is one of those old souls that make the rest of us poor mortals better for having known her. Thank you, Jeanne, for being a true heroine and keeping so many of us safe from the things that go bump in the night.

All I can see through the night-vision goggles are the eyes of the vampire I’m pressed against; the rest of his face is kind of obscured by the large-caliber handgun I have jammed up his nose. It makes his voice sound extremely nasal.

“I dode know why I shouldund just rip your priddy liddle throde oud,” he says. “I really dode.”

“Well, then, let me explain it to you. My name is Special Agent Jace Valchek and I work for the National Security Agency of the Unnatural States of America. I am a bona fide, one hundred percent real human woman, I’m not from around here, and the shiny piece of metal currently deviating your undead septum is a Ruger Super Redhawk Alaskan .454 chambered with silver-tipped, teakwood bullets. I know that last piece of information doesn’t mean a whole lot to you since guns never really caught on in this particular reality, but you saw what it did to your two friends from twenty feet away. I’m a whole lot closer. So unless you’re ready to pay the Grim Reaper the time-debt you owe his bony ass, I’d suggest you think of my weapon as a glorified crossbow that shoots very tiny arrows very, very fast.”

He thinks about it. He stinks of fermented blood and Cloven, the pire equivalent of meth—actually methamphetamine cut with just enough garlic to let it affect his metabolism. His breath, which technically he shouldn’t have, is terrible. I’m going to have to disinfect the gun later just to get the smell off it.

“Sure you have. AKA the Impaler? Leader of the Free Human Resistance? Same guy that released that video on the net that turned a few million hemovores and lycanthropes into living mummies for a while?
That
Aristotle Stoker.”

I’m getting real tired of Gus’s bloodsucker-with-a-head-cold routine—plus, my trigger finger’s a bit too close to his fangs—so I ease up, just a little. He takes this as a sign that I was kidding about blowing his head off, and grins. He’s short, pudgy, and balding, and no casting director in my world would ever have hired him to play a vampire. Here, he’s just one more neckbiter on a planet full of the living-challenged.

“Hey, take it easy. I got no reason to stand up for that guy—why would I want to get in the middle of some human thing? I mean, I don’t know much, but you don’t have to go all Lugosi on me.”

“If I knew, I’d tell you. But I only saw him for like ten minutes, okay? And that was over a week ago. He picked up a few things he had on order, then took off. No idea where he went.”