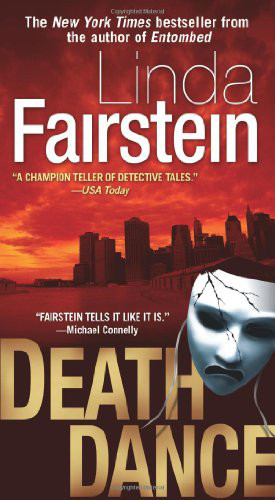 "You think we've got a case?" Mercer Wallace asked me.

"The answer's inside that cardboard box you're holding," I
said, opening the glass-paneled door of his lieutenant's office in the
Special Victims Squad.

I placed my hand on the shoulder of the young woman who was
slumped over a desk, napping while she waited for my arrival. She
lifted her head from her crossed arms and flicked her long auburn hair
out of her eyes.

"I'm Alex Cooper. Manhattan DA's office." I tried not to
convey the urgency of what we had to get done within the next few
hours. "Are you Jean?"

"Has Detective Wallace explained what we need?"

"You're the prosecutor running the investigation, he told me.
I've got to go through the details with you again, and then make a
phone call that you're going to script for me. Is Cara still here?"
Jean asked.

"She's in another office down the hall," Mercer said. "It's
better we keep you separated until this is done. Then we'll take you
over to the hotel and let you get some rest."

I had been the assistant district attorney in charge of the
Sex Crimes Prosecution Unit for more than a decade, and Mercer had
called me into the case to try to add something from my legal arsenal
to speed the arrest process and increase the likelihood that Jean Eaken
would be a successful witness in the courtroom.

Mercer told me that the twenty-four-year-old Canadian graduate
student had met the suspect at a conference on adolescent psychology at
the University of Toronto, which she had attended with her friend,
Cara, four months earlier.

I sat opposite Jean, who stifled a yawn as I asked the first
question. It was almost midnight. "When you met Selim back in January,
how much time did you spend with him then?"

"I sat next to him at a couple of lectures. We made small talk
during the breaks. He bought Cara and me a glass of wine on the last
afternoon, at happy hour. Told us he lived in Manhattan, that he was a
doctor. Nothing more than that."

"He invited you to New York?"

"Not exactly. I told him that we'd never been here, but that
we had a trip planned for the spring. He was very friendly, very kind.
Cara asked him if he knew any inexpensive hotels, since we're on
student budgets, and he told us we could stay at his apartment."

"Did you talk about the sleeping arrangements?"

"Yes, of course. Selim told us he had a girlfriend, and that
he'd either stay over at her place or sleep on a futon in the living
room. He offered us the twin beds," Jean said. "He gave me his card,
Ms. Cooper, with his office phone and everything. He's a medical
doctor— a psychiatric resident. It seemed perfectly safe to
both of us."

"It should have been perfectly safe," I said, trying to
reassure her that it was not her own judgment that precipitated her
victimization. "Did you correspond with him after that first meeting?"

Jean shrugged. "A couple of e-mails, maybe. Nothing personal.
I thanked him for his offer and asked him whether he really meant it.
Then I sent him another one a month ago, after Cara and I set our
travel dates, to see if those were still good for him."

Mercer nodded at me over Jean's head. He was keeping a list of
things to do, and getting subpoenas for the e-mail records of both
parties would be added to his tasks. We had worked together often
enough to know each other's professional style, especially for
documenting every corroborating fact we could in this often bizarre
world of sex crimes.

"Were there any phone calls between you two?"

"Just one, a week ago. I left him a voice mail explaining when
our bus arrived at the Port Authority and making sure it was a
convenient time to show up at his apartment. He called me back late
that night and we talked for a while."

"Can you reconstruct that conversation for us? The details of
it, I mean."

There would be skeptics on any jury that was eventually
impaneled, people who would assume that there must have been verbal
foreplay between the time of the first meeting of this attractive young
woman and the stranger at whose home she later arranged a sleep-over. I
needed to know that before Mercer and I took the next steps.

"Selim asked me if we had made plans for the days that we'd be
in the city and what we wanted to see. Things like that."

"Did he say anything at all,
Jean—anything—that made you think he was interested
in you, maybe socially or even sexually?"

She answered quickly and firmly. "No." Her green eyes opened
wide as she looked at me to measure my response.

She thought for several seconds. "He asked me why my boyfriend
wasn't coming with me. I told him I didn't have one," Jean said. "Oh,
yeah. He wanted to know if I liked to smoke marijuana, 'cause he could
get some while I was here."

Mercer moved his head back and forth. This was a fact he was
hearing for the first time. It didn't necessarily change the case at
all, but it reminded us that we had to constantly press for things that
often seemed irrelevant to witnesses—and for the truth.

"What did you tell him?"

"That I don't like weed, that it makes me sick."

"Did you expect to spend any time with him, Jean?"

"No way. Dr. Sengor—Selim—told us he'd be
at work all day and with his girlfriend most evenings. I just thought
he was being a nice guy, letting us crash at his place."

Most of my prosecutorial career had involved women meeting
nice guys who had other things in mind. Cops and
prosecutors—and often Manhattan jurors—found young
people from west of the Hudson River and north of the Bronx a bit too
trusting much of the time.

Jean forced a smile. "Not until I was ready to go to bed the
first night."

"It was after nine when we got to his place. We sort of
settled in and talked for an hour. Just stuff. Psychology and how hard
grad school is and what were our first impressions of the city. When
Cara went into the bathroom to take a shower, Selim came over to the
couch I was sitting on and like, well, he tried to hook up with me."

"Tell Alex exactly what he did," Mercer said, coaxing the
facts we needed out of her as he had done earlier in the day.

Jean was a well-built young woman, almost as tall as I am at
five-foot-ten, but much stockier. "I was tired from the long bus ride,
and kind of leaning back with my head against a pillow. Selim reached
over and tried to kiss me—right on the mouth—while
he was fumbling to get his hand on my chest."

"I just pushed him away and stood up. I asked him to give me
the telephone book so I could find a hotel to stay in."

"How did he react to that?"

"He was very apologetic, Ms. Cooper. He told me how sorry he
was, that he had misinterpreted my body language. He pleaded with me
not to tell Cara. He told me that in his country—"

"Selim's from Turkey. He said that back home, if anybody did
that to his sister, he'd be pilloried in the town square."

He'd be short one hand and castrated, too, no doubt. "So you
stayed?"

"He was a perfect gentleman from that point on. He was just
testing me, I guess. It's happened to me before. Maybe that's why I
thought I could handle the situation."

"You'll have to ask her about that," Jean said, blushing
perceptibly.

Mercer had already told me that Selim Sengor hit on Cara, too,
after Jean fell asleep the first night. They stayed in the living room
talking, and she engaged in some kissing and fondling with him, but had
stopped short of further sexual intimacy. That was another reason to
keep the witnesses separated. They were likely to be more
straightforward with us out of each other's presence. Cara might blame
herself for what happened thereafter—an unfortunate but
typical reaction when some of the sexual contact was consensual. She
might even be less candid in front of Jean.

"Did you socialize with him during the week?"

"No. In fact, he actually did spend the night before last with
his girlfriend. We hardly ever saw him." She bit at the cuticle of one
of her nails, until she noticed me watching her. Then she straightened
up again and began to wind a strand of her long hair behind her left
ear.

"In the morning, after Cara and I made our plans, I beeped him
at the hospital. When he called back, I told him that we were going
sightseeing and planned to pick up some half-price tickets to a
Broadway show, in Times Square. We invited him to join us, to thank him
for letting us stay with him."

"Did he spend the evening with you?"

"No, he didn't seem the least bit interested in doing that."

"Did you and Cara go to the theater?"

"Yeah, we saw that new Andrew Lloyd Webber thing. Cara loves
him. We got back to the apartment after eleven o'clock and Selim was
waiting up for us. We bought him a gift, an expensive bottle of
Kentucky bourbon," Jean said, smiling again, now braiding the length of
hair as she talked. "It sounded very American."

"He offered us a drink and we both said sure. We sat in the
living room while Selim went into the kitchen and mixed the cocktails."

"Mixed them? What did he make for you?"

Again she shrugged and shook her head. "I don't know. I never
drank bourbon before. I heard that loud kind of noise that a food
blender makes, and he came out with something—I don't
know—it looked very frothy when he brought it to us."

I couldn't imagine anyone adding something to a good scotch,
and I doubted there was much to improve on in a fine bourbon either.

"Had you changed your clothes, Jean, to get ready to go to
sleep?"