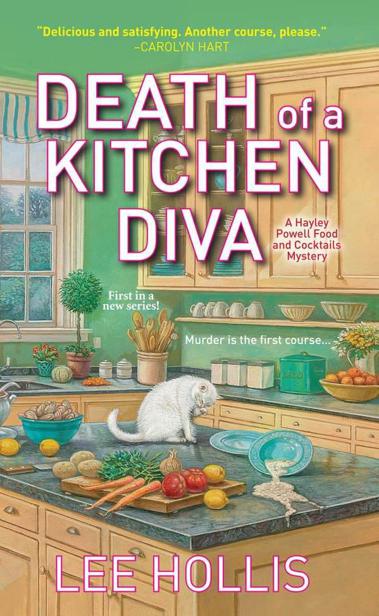 KITCHEN SURPRISE
Hayley crawled to her knees. What had she tripped over? She didn’t know where the switch to the overhead lighting was, so she opened the oven door. The light inside came to life and illuminated a body sprawled out on the floor.
Hayley gasped.
It was a woman’s body.
Hayley shook the left shoulder. “Karen, is that you? Are you okay?”
Then she remembered the wet and sticky substance on her hand.
Dear God. Please let it not be blood.
But it wasn’t. It was milky and white. She smelled her palm. It was clam chowder.
Hayley placed her palm down on the stovetop and pulled herself up to her feet. The light from the oven was bright enough so that she could see the light switch next to the range. She reached over and snapped it on. A blinding light flooded the room and Hayley, squinting, stepped back away from the body.
She recognized Karen Applebaum instantly.
Even though the poor woman was facedown in a turquoise-colored porcelain bowl of New England clam chowder ...
A Hayley Powell
Food & Cocktails Mystery
Death of a Kitchen Diva
Lee Hollis

Letters to Penthouse XXXVI by Penthouse International
Ana Seymour by Jeb Hunters Bride
The Conflict by Elisabeth Badinter
Gunsmoke Justice by Louis Trimble
Up and Down Stairs by Musson, Jeremy
The Mission by Fiona Palmer
Brave Girl Eating by Harriet Brown
Raphael (The Immortal Youth Book 1) by La Porta, Monica
Joyland by Stephen King
In the Dead of Cold by Allie Quinn
Our partner