Death on a Galician Shore 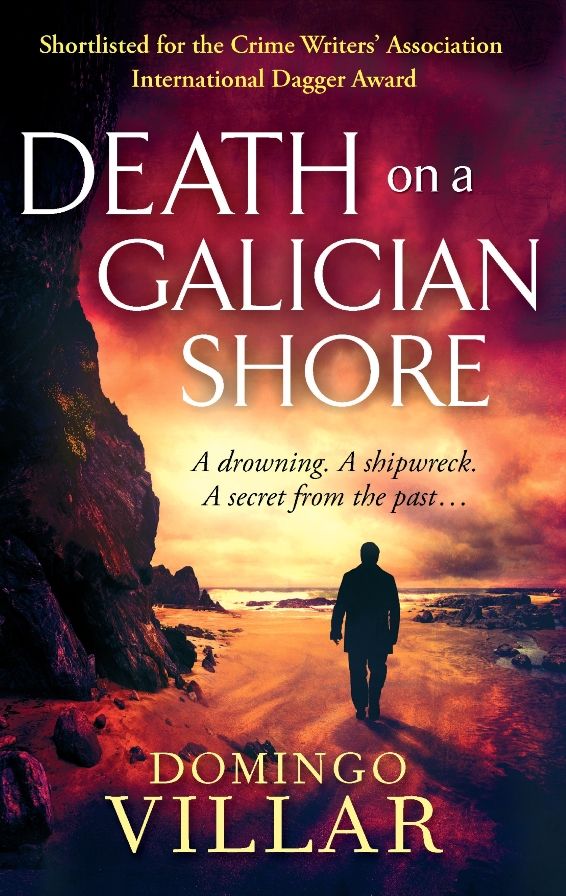 Domingo Villar
grew up in Vigo, Galicia, and now lives in Madrid. His two novels have been top-ten bestsellers and shortlisted for several awards in Spain.
Death on a Galician Shore
won the 2009 Brigada 21 Prize for best crime novel in Spain, and Domingo Villar was named Galician author of the year. His first novel,
Water-blue Eyes
, also featuring Inspector Leo Caldas, is published by Arcadia.
Death on a Galician Shore
is his second novel.

A Call from Estevez

The Shipwreck of the Xurelo

The Lighthouse at Punta Lameda

A Catch at the Lighthouse

A Packet of Cigarettes

The Man on the Billboard

The Woman in the Yellow Dress

Inspector Leo Caldas got out of a taxi and, stepping over the large puddles on the pavement, entered the hospital. He made his way through the crowd of people waiting by the lifts and headed for the stairs. He went up to the second floor and walked along a corridor lined with closed doors. Stopping at the one numbered 211, he opened it a crack and looked in. A man in a green respiratory mask was asleep in the bed nearest to the window. The television was on, with the sound turned down. The other bed was empty and sheets were folded on top of the bedcover.

Caldas glanced at his watch, closed the door and went to the waiting room at the end of the corridor. There he found only an elderly woman, her black clothes contrasting with the white of the walls. She looked up expectantly as Caldas put his head round the door. Their eyes met briefly before she looked down again, disappointed.

Caldas heard footsteps behind him and turned around. His father was hurrying towards him down the corridor. Caldas raised a hand in greeting.

‘Have you seen him?’ asked his father in a whisper once they were standing outside the room.

‘Only from out here,’ answered Caldas. ‘I was late too. Have you spoken to the surgeon?’

His father nodded: ‘He said it’s not worth operating.’

Entering the room, the inspector’s father went to sit on the empty bed, wrinkling his nose in distress as he looked at his brother. Caldas remained standing.

A drip was dispensing the contents of several vials into the emaciated arm of Uncle Alberto. Beneath the sheet, Alberto’s chest rose slowly, and then fell abruptly, as if each exhalation were a deep sigh. The sound of oxygen bubbling through distilled water and air whistling as it escaped from the sides of the mask drowned out the murmur of the rain outside.

Caldas crossed to the window. He parted the net curtains and, through the double glazing, watched the lights of the cars stuck in traffic and the procession of umbrellas along the pavement.

He turned, alerted by the hissing of the mask, which his uncle had removed in order to speak.

‘Is it still raining?’ Alberto whispered before replacing the mask.

Caldas nodded, gave a small, close-lipped smile and jerked his head towards his father. His uncle was about to take off the mask again when his father stopped him.

‘Come on, leave that alone. How are you feeling?’

The patient waved a hand and placed it over his chest to convey that it hurt.

‘Well, you’re bound to be uncomfortable,’ said his brother.

After a moment’s silence, Alberto gestured towards the radio on the bedside table and looked at the inspector.

‘He says he listens to your programme,’ his father explained.

Alberto nodded and gave a thumbs-up.

‘He says he likes it,’ his father translated once again.

‘Right,’ said Caldas, then he indicated the muted television, tuned to a news bulletin: ‘I think TV’s more entertaining.’

His uncle shook his head and gave another thumbs-up at the radio.

‘He says your programme’s better.’

‘Do you really think I can’t understand him?’ Caldas asked his father. ‘Anyway, it’s not my programme. I’m only on occasionally.’

Caldas’s father looked at his brother – whose eyes were smiling behind the mask – and the inspector watched, fascinated, as they began to converse without the need for words, using only glances and facial gestures, communicating in the private tongue of those who have shared a childhood.

A doctor entered, to the evident annoyance of the patient.

‘How are things going, Alberto?’ he asked. The only answer was a flutter of the hand.

The doctor lifted the sheet and felt several points on the patient’s abdomen. Beneath his green plastic mask, the patient grimaced each time the doctor touched him.

‘In a month you’ll be as good as new,’ the doctor said as he finished his examination and, after winking at Caldas’s father, he left the room.

The three men remained in uncomfortable silence until Uncle Alberto gestured for his brother to approach. The inspector’s father went over to the bed and Alberto removed his mask.

‘Can you do me one last favour?’ he said in a weary voice.

‘Have you still got your Book of Idiots?’

‘Have you still got it or not?’ insisted the patient, straining to raise his murmur of a voice above the hissing of the oxygen.

‘Well, add that doctor to it,’ he said, pointing feebly at the door through which the doctor had departed.

He breathed through the mask for a few moments before removing it again and whispering: ‘His name’s Doctor Apraces. Will you remember that?’

Caldas’s father nodded and gently squeezed Alberto’s arm. His brother’s face wrinkled around the mask as he smiled. His breathing resumed its jerky rhythm when he fell asleep and the gurgle of distilled water continued.

Outside the hospital, the inspector lit a cigarette and his father opened his umbrella.

‘There’s room for both of us under here,’ he said.

Caldas moved closer to him and they set off towards the car park, to the accompaniment of a chorus of honking horns from drivers exasperated by the traffic jam.

‘You’ve got a Book of Idiots?’

‘Didn’t you know?’ his father replied, not looking at him, and Caldas noticed that his eyes were moist.

He was surprised because, though he had spent many nights after his mother’s death listening to the sound of his father weeping, he had never actually seen him shed a single tear. He decided to hang back a few steps despite the rain, and let his father give vent to his grief.

In the car park, before getting into the car, his father asked: ‘Can I drop you anywhere, Leo?’

‘Where are you going?’

‘Will you be visiting him tomorrow?’

‘In the afternoon,’ said his father. ‘After lunch.’

Caldas reflected that he could phone the superintendent first thing and take the morning off. And, with any luck, he’d get to the radio station late and that fool Losada would have to manage without him.

‘Well, I’ll come with you, and you can give me a lift back.’

His father stared at him. ‘Are you going to stay at my house tonight?’

‘Don’t you have work tomorrow?’

Caldas shrugged, took a quick drag on his cigarette, threw it on the ground and climbed into the car.

In the months of anguish following the death of his wife, Leo Caldas’s father had sometimes visited the manor house where she had lived as a child, an old ruin consisting of little more than stone walls. Only the winery had withstood the years of neglect, half sunk into the ground so as to avoid sudden changes in temperature. Inside there remained some barrels, an ancient wooden press, a hand-operated bottle filler and a few other old implements. Walking around the estate, its terraced vineyard descending like an amphitheatre to the River Miño, the inspector’s father had found balm for his sorrow, a solace that the city denied him.

One October, seeing the grapes ripen and rot on the vines, and cheered by the thought of spending more time there, he decided to start making wine again in the old winery. After several months of reading and seeking advice, he starting working a small plot of land close to the house.

Every Saturday and Sunday, on the pretext of tending the vines, father and son rose early and drove out to the estate, a journey of almost fifty kilometres on winding roads that had to be made in stages, with the windows open, due to the young Leo’s carsickness.

That March at weekends they cleared the land and, in April and May, they tore out the old barren vines. In the summer, making the most of the holidays and longer hours of daylight, they put up posts and wires to support the remaining healthy vines and the new ones to be planted that winter, after the harvest.

For the first few years, as he extended the land under cultivation,
Caldas’s father sold wine from the barrel or gave it to friends. Later, as the new vines began producing, he put his savings into modernising the winery so that he could bottle and sell the wine under label. He soon recouped his money, as the wine was acquiring a good reputation and, though the quantity increased with every harvest, he had no trouble selling it all.