Death Traps: The Survival of an American Armored Division in World War II 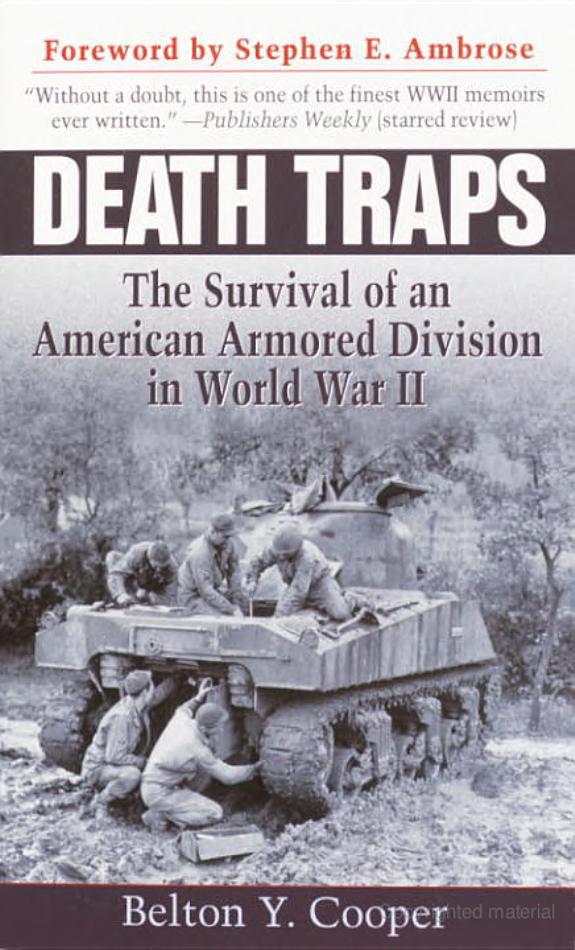 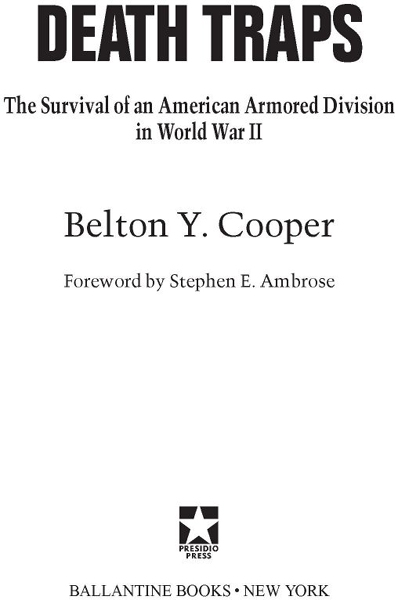 On Board the LST to Normandy

The Bocage and the Hedgerows

Combat Command A: Action at Villiers-Fossard

Thoughts on the Reality of Combat

The German Counterattack: Tanks and Infantry in the Hedgerows

The Danger of Smoking in a Foxhole

The Battle of Mortain

To Paris and Across the Seine

5 - From Paris to Soissons

Advance from Paris to the Northeast

Soissons and Laon: Battleground of World War I

The Roadblock at Maubeuge

A Meeting Engagement at Mons

Verviers to the Siegfried Line

6 - Assault on the Siegfried Line

Attack Through the Dragons’ Teeth

The Battle of Aachen

Buildup to the Breakout Through the Siegfried Line

The Assault to the Roer River

The Failure of the November Offensive

7 - The Battle of the Bulge: Phase I, the German Attack

Status of the Division Prior to the German Attack

8 - The Battle of the Bulge: Phase II, the Counterattack

My Driver, White, Is Wounded

A Problem with Frostbite

On Leave to Reims

Trading with the Enemy

Sleeping on a UXB

10 - Battle of the Rhineland

Attack Across the Rhineland

The Assault on Cologne

11 - The Battle of Central Germany

Envelopment of the Ruhr Pocket

Annihilation of a Task Force

The Tragedy at Nordhausen

Darmstadt and the Army of Occupation

Reflections on the Aftermath

To the brave men of the 3d Armored Division who gave their
lives so that those of us remaining, by the Grace of Almighty
God, could become survivors.

I would like to acknowledge several people who helped me write this book, not necessarily in the order of their importance.

While still in Germany, I confided my thoughts to my buddy, Lt. Earl Binckley, who continually prodded me to tell my story. Dr. James Tent, professor of history, University of Alabama at Birmingham, was encouraging and introduced me to Dr. Stephen E. Ambrose. Dr. Ambrose reviewed my manuscript and used it as a reference for his book,
Citizen
Soldiers.
As a result of this, Dr. Ambrose graciously consented to write the foreword for this book.

My family: my wife Rebecca; my sons, Belton, Lloyd, and Spencer; and Lloyd’s wife, Tish, were patient, helpful, and encouraging. My secretary, Betty Hartwell, did much of the typing.

Mike Bennighof, a doctoral candidate in history, did an excellent job of editing my original manuscript. The photographs were furnished courtesy of Ernie Nibbelink, Earl Binckley, Clarence Smoyer, and Marvin Mischnick. I am indebted to Sheila Criss for producing the maps. Deborah Baxter Swaney provided considerable help with proofreading the manuscript. I am indebted to Bob Kane, Richard Kane, and E. J. McCarthy of Presidio Press for their guidance and professionalism.

“AN IMPORTANT CONTRIBUTION TO THE HISTORY OF WORLD WAR II . . .

I have never before been able to learn so much about maintenance methods of an armored division, with precise details that underline the importance of the work, along with descriptions of how the job was done.”

“As an alumnus of the 3rd, I eagerly awaited this book’s coming out since I heard of its release . . . and the wait and the book have both been worth it. . . . Cooper is a very polished writer, and the book is very readable. But there is a certain quality of ‘you are there’ many other memoirs do not seem to have. . . . Nothing in recent times—ridge-running in Korea, firebases in Vietnam, or even the one hundred hours of Desert Storm—pressed the ingenuity and resolve of American troops . . . like WWII. This book lays it out better than any other recent effort, and should be part of the library of any contemporary warrior.”

“Cooper’s writing and recall of harrowing events is superb and engrossing. Highly recommended.”

—ROBERT A. LYNN
The Stars and Stripes

“This detailed story will become a classic of WWII history and required reading for anyone interested in armored warfare.”

Books published by The Random House Ballantine Publishing Group are available at quantity discounts on bulk purchases for premium, educational, fund-raising, and special sales use. For details, please call 1-800-733-3000.

Belton Cooper’s memoir of his World War II service with the 3d Armored Division in Europe is a gem. As a member of the 3d Armored Division Maintenance Battalion, he had liaison duties that took him far and wide, so he saw more of the war than most junior officers, and he writes about it better than most anyone. He takes us into the hedgerows of Normandy, through the Falaise pocket to the Siegfried Line, then to the Battle of the Bulge, over the Rhine, and across Germany.

His stories are vivid, enlightening, full of life—and of pain, sorrow, horror, and triumph. I first read Cooper’s memoir in manuscript and quoted from it extensively in my own
Citizen Soldiers
. That is the highest compliment I can pay to a memoir.

Although there have been a number of great books written on the American Army’s campaign in Western Europe during World War II, most military historians have failed completely to understand the enormous impact on American armored troops of having to fight superior German tanks. The campaign in Western Europe was essentially a war of movement, of armored conflict developed to the highest state of the art. Our major weapon for this armored warfare was the M4 Sherman main battle tank. In all the key capabilities of a main battle tank—firepower, armor and mobility—the M4 Sherman was decidedly inferior to the superior German tanks it encountered in battle. This major disadvantage not only resulted in tremendous pain and suffering and losses in personnel and armor, but also delayed the successful conclusion of the War in Europe. Herein lies the primary focus of this book.

My function was to travel with the Combat Command during the day, and assist in coordinating the recovering, evacuation and maintenance of damaged combat equipment. When the Combat Command stopped at night, it would prepare a 360° perimeter defense. Why 360°? Because during the attack, a breakthrough would put them behind enemy lines with little or no infantry support. It was my responsibility to prepare a Combat Loss Report showing all the tank and other vehicle losses during the day. I then took this report back through the bypassed German units, and delivered it to the Ordnance Battalion, thirty to sixty miles to the rear. The next morning I would return to the Combat Command with tanks and other replacement equipment lost forty-eight hours prior to this date. Thus, we had new replacement vehicles within a forty-eight hour period after taking severe losses.

To me, one of the greatest tragedies of World War II was that our armored troops had to fight the Germans with a grossly inferior tank compared to the heavy German panzer units. Before we went into Normandy, we had been led to believe that the M4 Sherman main battle tank was a good tank, thoroughly capable of dealing with German armor on an equal basis. We soon learned that the opposite was true. The 3d Armored Division entered combat in Normandy with 232 M4 Sherman tanks. During the European Campaign, the Division had some 648 Sherman tanks completely destroyed in combat and we had another 700 knocked out, repaired and put back into operation. This was a loss rate of 580 percent.

In addition to this staggering battle loss rate of 580 percent in our main battle tanks, we also experienced extremely heavy wear and tear due to the everyday operation of the equipment. From where we landed on Normandy Beach, across France, around Paris, through Belgium, through the Siegfried Line, back and forth during the Battle of the Bulge, across the Rhine Plain, around the Ruhr (Rose) Pocket, and deep into Germany was approximately 1,460 miles. I believe the only way for a unit to survive these staggering losses and extreme wear and tear was because of the superior maintenance and supply system which we had available operating in the field at that time. In a reinforced heavy armored division, like the 3d Armored Division, out of some 17,000 troops, we had an ordnance maintenance battalion of over 1,000 men. In addition to this, if you consider the total number of maintenance soldiers in the maintenance companies of the two armored regiments and the armored infantry regiment, plus the maintenance units in the three armored field artillery battalions, the tank destroyer battalion, the antiaircraft battalion, the combat engineer battalion, the signal troops and all the other remaining maintenance personnel in the division, this gives an additional 1,000 maintenance soldiers. The reinforced heavy armored division had some 4,200 vehicles both combat and wheel vehicle types. Each vehicle had a driver and an assistant driver who did first echelon maintenance such as checking tires, tracks, spark plugs, belts and putting in gas and oil and other lubrication. Thus out of 17,000 men approximately 10,400 were involved either directly or indirectly in maintenance. This amounts to some 61 percent of the entire division personnel. It was only through the superhuman effort of these maintenance people plus an extremely efficient ordnance supply system that enabled the division to survive under such extremely adverse conditions.

When the 3d Armored Division was organized in the spring of 1941, the initial cadre came primarily from the southeastern states, such as Alabama, Tennessee, Georgia, Mississippi, Florida, Louisiana and Texas. A high percentage of these men came from rural backgrounds and had some experience with farm machinery, such as tractors and cultivators. The second large cadre of personnel came from the midwestern states of Illinois, Indiana, Michigan, Ohio and Pennsylvania. A number of these men came from industrial backgrounds and had experience with industrial machinery in manufacturing. The maintenance battalion picked the best mechanics, machinists, and welders from these two groups. These men were given additional training by experienced ordnance noncommissioned officers, some of whom had seen service in World War I. In addition to this, many of the best qualified men were sent to the tank maintenance school at Fort Knox or the ordnance armor school at Aberdeen Proving Ground. Practically all our ordnance mechanics had had some three years experience in maintenance work, prior to getting into combat.

Once in combat, it was virtually impossible to get replacement tank maintenance mechanics, and equally difficult, if not more so, to get trained replacement tank crews. As a result, it was necessary for the ordnance maintenance battalion to develop a twofold function. We not only did the maintenance, repair, and replacement of the shot up tanks, but we actually became involved in the training of new tank crews. After severe tank losses and comparable losses in the crews, the armored regiments ran out of good tank crews. It was necessary for the ordnance to take raw infantry recruits who had just come off the boat from the United States and train them to be tank crews. In some cases the training time amounted to only several hours or maybe a day at the most. These inexperienced crews in turn suffered more severe losses due to their lack of training. This is one of the great tragedies of World War II, and most historians have completely failed to understand this point. Had it not been for the ordnance maintenance crews and the maintenance crews of the armored regiments, the division could not have survived, and been maintained as a viable combat unit until the end of the war. Herein lies the secondary focus of this book.

Thus it may be seen that the VII Corps, which was the most powerful armored corps in the First Army, which in turn made it the most powerful armor corps in Western Europe, depended heavily on the forward maintenance of the 3d Armored Division, and without this help they would not have been able to accomplish many of their remarkable long movements and envelopments. Herein lies a third major focus of this book.