Deck The Halls With Love: Lost Lords Of Pembrook Novella 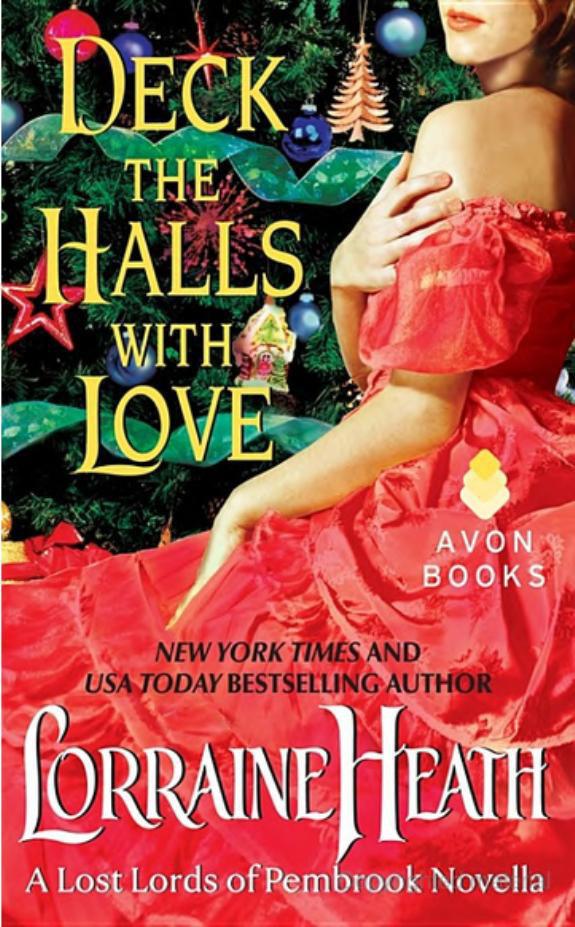 Christmas is a time for miracles … and second chances at love.

In her dazzling first Season, Lady Meredith Hargreaves gave her heart to Alistair Wakefield, the Marquess of Chetwyn, only to have it shattered when he proposed to another. And now that he's free to pursue her? It matters little, because she's on her way to the altar, heartbreak be damned.

Chetwyn once set aside his dreams in favor of duty and honor. But as Christmas approaches, he is determined to put his own desires first and lure Lady Meredith back into his arms, where she's always belonged.

First he steals a dance; then he steals a kiss. But when they find themselves alone in an abandoned castle during a snowstorm, reignited passion consumes them both. And Chetwyn will have one last chance to steal back Meredith's heart, once and for all.

A Lost Lords of Pembrook Novella

An Excerpt from
Lord of Wicked Intentions

An Excerpt from
Nights of Steel
by Nico Rosso

An Excerpt from
Alice’s Wonderland
by Allison Dobell

An Excerpt from
One Fine Fireman
by Jennifer Bernard

S
tanding alone beside a window a short distance away from the midst of the gaiety, Alistair Wakefield, the Marquess of Chetwyn, slowly sipped the Scotch that he had pilfered from his host’s library on his way to the grand salon. He’d known that attending this holiday gathering at the Duke and Duchess of Keswick’s new country manor would be unpleasant, but then he was not in the habit of shying away from the distasteful. It was the reason that on the morning he was to be married, he had encouraged his bride to seek out her heart’s desire. He’d known his being abandoned at the altar would be cause for gossip, that he would be considered weak and inadequate, but he didn’t much give a damn. He believed in love, and he’d recognized that Lady Anne Hayworth had given her affections to Lord Tristan Easton. So he’d willingly granted her the freedom to go, and then with as much dignity as possible he’d set about bearing the brunt of what many considered a humiliating affair.

From his shadowed corner, he now watched Lady Meredith Hargreaves dance with
her
betrothed, Lord Litton. Based on her smile and the way her gaze never strayed from his, she appeared to be joyous and very much in love with the fellow. Although perhaps she was simply imbued with the spirit of the season. He could always hope.

He knew he should look about for another dance partner. The problem was that she was the only one with whom he wished to waltz. Hers were the only eyes into which he longed to gaze, hers the only fragrance he yearned to inhale, hers the only voice he wanted whispering near his ear as passion smoldered.

It had been that way for some time now, but he had fought back his burgeoning desire for her out of a sense of obligation and duty, out of a misguided attempt to make amends regarding his younger brother, Walter, who had sacrificed his life in the Crimea. Chetwyn was destined to pay a heavy price for trying to assuage his conscience, unless he took immediate steps to rectify the situation. Lady Meredith was scheduled to marry a few days after Christmas. The decorated tree in the parlor, the sprigs of holly scattered about, and the red bows on the portraits that had greeted him upon his arrival had served as an unwarranted reminder that the auspicious morning was quickly approaching, and then she would be lost to him forever.

But if she loved Litton, could he deny her what he had granted Anne: a life with the man she loved?

It was a quandary with which he struggled, because he wished only happiness for Lady Meredith, but he was arrogant enough to believe that he could bring her joy as no one else could. No other gentleman would hold her in such high esteem. No other man would adore her as he did. Convincing her that she belonged with him was going to be quite the trick, as he suspected she’d rather see him rotting in hell than standing beside her at the altar.

Despite the fact that she was engaged to marry, he kept hoping that she would glance over, would give him a smile, would offer any sort of encouragement at all. Instead she waltzed on, as though for her he no longer existed.

L
ady Meredith Hargreaves, the Earl of Whitscomb’s daughter, absolutely loved to waltz. Quite honestly, she enjoyed any sort of physical activity. She had loved running, jumping, skipping, and climbing trees until her father had sent her to a ladies’ finishing school, where they had taught her that if she did not stifle her enthusiasm for the outdoors, she would never marry. So stifle she did with a great deal of effort and the occasional slap of the rod against her palm.

It showed in her eyes, her smile, and the way she beamed at them. She made them feel as though they mattered, and for those few moments they mattered a great deal because of the pleasure they brought her. But dancing with a lady did not mean that a gentleman wished to marry her. Because she was also known for being quite stubborn, strong-willed, and prone to arguing a point when most ladies would simply smile and pretend that they hadn’t the good sense to know their own minds.

She did know hers, and therefore she knew without question that Lord Litton was the man for her. He often praised her strong points. He sent her flowers. He wrote her poetry. He danced with her, a daring four times the night they met. Four, when only two times was acceptable. He had told her that he simply couldn’t deny himself the pleasure of her presence.

His inability to resist her was what had led to them being caught the night of Greystone’s ball in the garden in a very compromising situation that had resulted in a rather hasty betrothal. Her father had managed to limit the damage done by ensuring that no one other than he and her brothers knew of the discovery. Litton had been quick to propose on the spot, but then her father could be quite intimidating. As they were discovered before they had moved beyond a kiss, the wedding was not being rushed. Meredith knew Litton was an honorable man. He could have run off, but he didn’t. He stood by her and offered to marry her. She didn’t like the little niggle of doubt that surfaced from time to time and made her wonder if he arranged to be caught. If he did, was it because he so desperately wanted
her
or her dowry?

As he smiled down on her now, she sent the irritating doubts to perdition and accepted that he was madly in love with her. They would be wondrously happy together. If only her heart would cooperate.

She did wish she hadn’t noticed when Lord Chetwyn had strolled laconically into the room before the strains of the first dance had started. Based upon what had happened in the church earlier in the year, she hadn’t expected him to make an appearance where he would be forced to encounter his former fiancée and her husband. Lord Tristan was, after all, the Duke of Keswick’s twin brother, so Chetwyn had to know that he couldn’t avoid them. But he had cut such a fine figure in his black tailcoat as he had greeted his host and hostess. His fair complexion stood out next to the duke’s black hair and bronzed skin. His blond hair was perfectly styled, but even from a distance Meredith had seen the ends curling. She suspected by midnight the strands would be rebelling riotously, and he would no doubt be searching for some lady to run her fingers through them in order to tame them. She had once considered performing the service herself when they had taken a turn about a park. Thank goodness, she’d not been that foolish. It would have hurt all the more when he began to give his attentions to Lady Anne.

He was now standing in a corner, coming into view from time to time as though she were riding on a carousel, rather than swirling over a dance floor in Litton’s arms. Even when she couldn’t see him, she could sense Chetwyn’s gaze lighting upon her as gently as a lover’s caress. She had once thought that he might ask for her hand. But he had moved on, and so had she.

Litton was as fair, but his hair would not be misbehaving by the end of the evening. She rather wished it would. She longed for an excuse to run her fingers through it, although she suspected he might be rather appalled to know the direction of her thoughts. He did not have as easy a grin as Chetwyn, but his seriousness was endearing. She only wished he would reclaim the passion that had resulted in a near scandal.

“I’m sorry. I was just noticing how the snow is growing thicker beyond the windows.” A small lie, but she rather doubted that he would welcome knowing that Chetwyn was occupying her thoughts.

“Yes, we’re in for quite a storm tonight, I think. I hope we shall all be able to travel home when the time comes.”

“You’re such an optimist. It’s one of the things I love about you.”

Touched by his comment, she squeezed his shoulder. “We shall be happy together, won’t we?”

The music drifted into silence. He lifted her gloved hand to his lips. “As your card is filled and you’re gracing other lords with your presence for a while, I’m going to the gaming room for a bit. Just remember the last dance is mine.”

“I would never give it to anyone else.”

Watching him walk away, she could not help but think that she was a most fortunate lady indeed. Then she looked over and saw her next dance partner approaching.

Daughter of a Monarch by Sara Daniell
Aarushi by Avirook Sen
The Ex Factor by Cate Masters
Pynter Bender by Jacob Ross
Molten Gold by Elizabeth Lapthorne
Cracked by Barbra Leslie
The Broken Ones by Stephen M. Irwin
Is It Wrong to Try to Pick Up Girls in a Dungeon? by Fujino Omori
The Fiend Queen by Barbara Ann Wright
To Hold by Alessandra Torre
Our partner