Read Deep in the Heart of Trouble Online

Deep in the Heart of Trouble (38 page)

TONY CROSSED the curving veranda of his three-story home and entered a side door with six-month-old Sullivan on his hip.

“Let’s go find Mama,” Tony said, hanging his hat on the hall tree before heading to the reception room.

Essie stood beside an easel that held a diagram of an automobile. Her new wide-brimmed hat trimmed in blue velvet slanted fashionably to one side. A number of ladies sat grouped around her.

“You’re back early,” she said, glancing at Tony.

The baby waved his pudgy arms and kicked his legs upon seeing his mother. Tony handed him to her, noting again Sullivan’s blond hair was the same color as Essie’s, though his nose was red and runny.

“How was your drive?” she asked Tony, pulling a handkerchief from her pocket and swiping Sullivan’s nose.

“Exhilarating,” he answered, then turned to greet Essie’s guests. He recognized the senator’s wife, Mrs. Lockhart’s daughter, and Russ’s wife among the throng. “How do you do, ladies? What are y’all up to this fine afternoon?”

“We’re discussing the features of the new Locomobile,” Essie answered, loosening Sullivan’s coat and tickling him beneath the chin. She grinned as he squealed with laughter.

“Yes,” said Iva O’Berry, smiling at Tony mischievously. “Your wife has invited us to be part of her Beaumont Ladies Automobile Club and she’s going to teach us how to drive.”

He snapped his attention to Essie. “What?”

A huge boom from somewhere outside rattled the windows of the house.

“What in the world?” Essie said, absently patting the baby’s back. Tony glanced out the tall windows facing east. “Sounded like a cannon or something.”

“Essie?” he asked, returning his attention to the matter at hand. “May I see you in the library for a moment?”

“Certainly.” She looked at her ladies. “If you’ll excuse me, I’ll be right back.”

With a calm he didn’t feel, he escorted her beneath the majolica glass light fixture and past the gingerbread spool design portals separating the hall from the stairwell.

“You’re back,” his mother said, stepping into the hall.

The baby opened his mouth in a huge yawn.

“Oh dear. You’ve worn the poor little thing out, Tony.” She held out her arms. “Come, my sweet, and let’s go to the nursery, where Grandmama can get you out of your coat, then rock you to sleep.”

Essie relinquished her son, and Tony marveled again at the delight his mother took in the baby. She’d regained much of her former glow and vigor since becoming a grandmother.

“Thank you, Mother,” Tony said, but she was already on her way up the stairs, singing softly to Sullivan.

Tony opened the heavy sliding doors to the library, inviting Essie to enter with the sweep of his hand. Stained-glass windows with the faces of Dickens and Longfellow welcomed them.

He slid the doors shut.

“I was going to tell you,” she said before he could even turn around.

He rubbed his eyes. “Essie, women are not supposed to drive. I only taught you because you are not like most women.”

“And I love it! It’s fabulous. I think it a crime to forbid other women to drive. So many of my friends want to learn. That’s what gave me the idea of forming a club.”

“No,” he repeated. “The men of this town will ride me out on a rail if I let you teach their wives to drive.”

She crossed her arms. “That’s what everyone in Corsicana said about the bicycle club, too.”

“I’m forming the organization, Tony. I’ve all that money from the sale of the Velocipede Club and I want to invest it in an automobile club for women.”

“Using my car as its teaching tool?”

He suppressed a groan. The menfolk were going to kill him. Russ, especially. He thought it a great joke that Essie was such a tomboy and took tremendous pride in ribbing Tony about it. But he would be furious if Iva took up driving.

“In
Thrown on the World
,” Essie said, “Miss Moffitt became a shoe cobbler when her father lost his eyesight—a craft supposedly suitable for men alone. Yet she helped many of her lady friends make a way for themselves.”

Essie rolled her eyes. “She was a bit careless. I’m much more levelheaded.”

Tony slid open the doors and stepped into the hallway just as Iva answered the door.

A teener in dungarees and covered with oil stood dripping on the front porch. “Mr. Morgan! Come quick. One of the rigs on Spindletop Hill is gushin’ clear up to the sky!”

Essie grabbed his hand, her eyes alive with excitement.

“I’ll send word back as soon as I can,” he said, pulling her to him and planting a kiss on her lips. “We’ll talk about the auto club later.”

Grabbing his hat and coat, he rushed out the door and headed toward Spindletop, wondering how he was going to tell the men of Beaumont that before the year was out, their wives would very likely know more about automobiles than they would.

I had such plans for incorporating all the exciting developments of the oil industry’s early days—the building of the first oil refinery in Corsicana, the shipment of the first batch of refined oil in Texas, the clever marketing strategies the early oilmen used to promote their product. Yet Essie and her bicycle club simply took over the story and, before I knew it, the novel had ended and I didn’t get to include all that wonderful history I’d so thoroughly researched. At least we managed to go from being rope chokers to mud drinkers! (Cable-tool boys to rotary boys.) The oil companies I used were all fictional, but the Baker brothers did, in fact, introduce their rotary drill to Corsicana, thus revolutionizing the Texas oil industry.

Being the daughter of an oilman, the wife of an oilman, a Texan, and a former resident of Corsicana, it has been a delight to write these last two books. I shall always be particularly fond of my
Trouble
books and of all the friends I made while researching them.

Next, we’re off to Seattle in the mid-eighteen hundreds. So get ready to rewind back a few years and watch for a brand-new story in June 2009. Until then, come by and visit me on my Web site (
www.IWantHerBook.com
). I have a blog, a chat room, games, contests, email, and a lot of readers just like you, waiting with open arms. See you there! 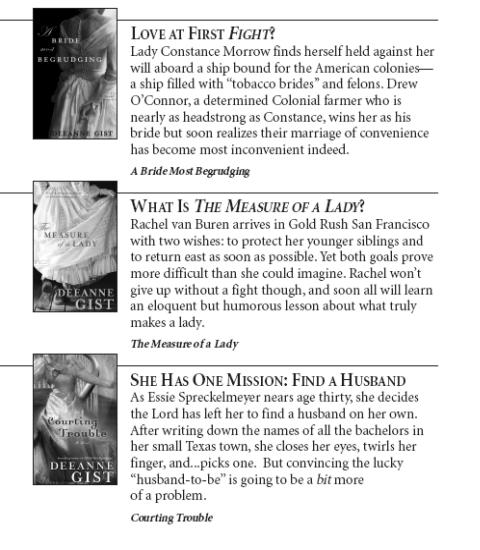 You can find out what is new and exciting with
previews, descriptions, and reviews by signing up for
Bethany House newsletters at

We will send you updates for as many authors or
categories as you desire so you get only the
information you really want.

The Art of Stealing Time: A Time Thief Novel by MacAlister, Katie
Silver and Chrome: A Bad Boy MC Romance by St. Clair, Aubrey
Paradox by John Meaney
The Hypothetical Girl by Elizabeth Cohen
More Money Than Brains by Laura Penny
Sepulcro by Kate Mosse
1920 by Eric Burns
The Call by Michael Grant
Texas Angel, 2-in-1 by Judith Pella
Because He Watches Me (Because He Owns Me, Book Nine) (An Alpha Billionaire Romance) by Hannah Ford
Our partner