Read Deep in the Heart of Trouble Online

Deep in the Heart of Trouble 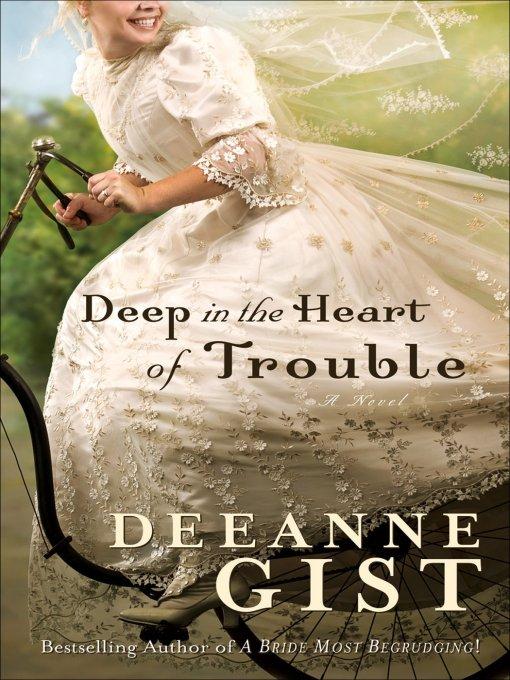 Deep
in the
Heart
of
Trouble

A Bride Most Begrudging

The Measure of a Lady

Deep in the Heart of Trouble

A Bride in the Bargain 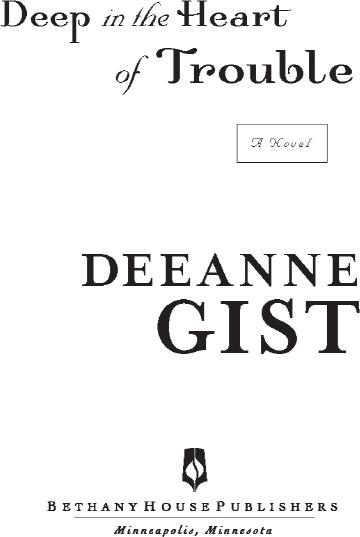 Deep in the Heart of Trouble
Copyright © 2008
Deeanne Gist

All rights reserved. No part of this publication may be reproduced, stored in a retrieval
system, or transmitted in any form or by any means—electronic, mechanical, photocopying, recording, or otherwise—without the prior written permission of the publisher. The only exception is brief quotations in printed reviews.

Deep in the heart of trouble / Deeanne Gist.

To Gary and Carol Johnson,
whose contributions to the Christian Fiction genre
have had an immeasurable impact
on the furthering of God’s kingdom.
May He bless you a hundredfold to how you
have blessed me and so many others.

DEEANNE GIST has a background in education and journalism. Her credits include
People, Parents, Parenting, Family Fun,
and the
Houston Chronicle
. She has a line of parenting products called I Did It
®
Productions and a degree from Texas A&M. She and her husband have four children—two in college, two in high school. They live in Houston, Texas, and Deeanne loves to hear from her readers at her Web site,
www.deeannegist.com
.

I am so thankful for the support I receive from fellow writers Meg Moseley and J. Mark Bertrand, who see my work in its rawest form, then faithfully critique it for me one chapter at a time. I am forever grateful to you both. Thank you for the time commitment and the sharing of your expertise.

Once I finish my novel, I have my “go-to” readers who give the manuscript a fresh read from start to finish, then offer excellent feedback and suggestions. They include: my parents, Harold and Veranne Graham; my sister, Gayle Evers, who also thought of the title,
Deep in the Heart of Trouble
(You go, girl!); and my beloved friend and comrade, Allison Smythe.

Finally, I humbly turn the manuscript in to my editors, David Long and Julie Klassen, who then take it and put it through a refining fire. How blessed I am to have them.

Thus, the book you hold in your hands is the offering I give to you and to our gracious God. It is my fervent hope that it be worthy of you both.

“When I saw you on your wheel, sweet Lenore
Oh my brain did never reel so before.
You were clad in knickerbocks
And you wore such brilliant sox
I could see ’em twenty blocks, maybe more.

“I but gave a passing glance, sweet Lenore
At the natty sawed-off pants which you wore,
Then the cruel ground I hit
I had fallen in a fit,
And I’ve not recovered yet, sweet Lenore.”

ESSIE SPRECKELMEYER didn’t have a man, nor did she need one. She had her own arms and legs, a head full of sense, and a hearty constitution. Furthermore, if she’d married and multiplied—thus fulfilling her moral and physiological destiny—then she’d never have been able to travel to New York City alone and enter her bicycle costume in the
Herald
’s competition.

Hundreds of people had gathered to celebrate this first day of New York’s cycling season. The stately grounds of Central Park contrasted sharply with the hustle and bustle of the city’s streets, yet Essie found herself unable to enjoy her surroundings. Moisture collected on her palms, and her stomach tensed, for the newspaper editor on the podium was winding down his speech and preparing to announce the contest winner.

With one hand, she smoothed the full yellow bodice of her costume, which fastened on the right side under a ruffle of cream lisse. With the other, she plucked at bloomers that drooped deeply upon gaiters of cloth to match.

Glancing at the crowd of bicycle enthusiasts packed in and around her, she took a deep breath. Her solo train trip across the country had scandalized everyone back home in Corsicana, Texas. If she won this competition, though, it would go a long way in soothing their sense of propriety. There was nothing Texans liked more than to prove they could do things better than their northern compatriots. In Essie’s mind her only real competition was a woman from Boston, whose costume was both appealing to the eye and extremely practical. But the lady’s plain brown hat fell quite short of the mark.

Essie checked the hat perched atop her tightly twisted blond tresses, hoping the extravagant design of her own invention would tip the scales in her favor. The straw confection held two lines of yellow roses, with a frill of laced leaves towering well above the crown.

The speaker recaptured Essie’s attention. “So without further ado, ladies and gentlemen, the winner of the
New York Herald
’s contest for Best Bicycle Costume goes to … Miss Esther Spreckelmeyer of Corsicana, Texas!”

At the sound of her name, Essie trembled with a mix of elation and disbelief. Excusing herself, she wove through the murmuring crowd and toward the festooned podium. Heads craned to catch a glimpse of her approach. The masses parted like clouds making way for a tiny beam of light.

“Congratulations, dear,” said an elegant woman wearing a hat of rose-pink chiffon with a sheer polka-dot veil. A swarthy man in white knickerbockers and matching jacket touched his beret. A young police officer took Essie’s elbow and waved the crowd back.

And then she was at the podium, where the newspaper editor, who couldn’t weigh more than a hundred twenty pounds soaking wet, handed her the giant first-place wreath. It was half again as big as she and almost as heavy.

A bouquet of luscious aromas from the roses, gardenias, and carnations decorating the wreath filled her nose.

The editor beheld her prizewinning costume, then turned to the crowd with a flourish of his elegant little hand. “I give you Miss Spreckelmeyer, owner and president of the Corsicana Velocipede Club.”

Straightening her posture, she slipped the pleated cuff of her gigot sleeve through the wreath and held it to the side so the crowd could take another look at the costume that had been voted to victory.

Men cheered. Women clapped, their gloved hands sounding like the rapid flapping of birds’ wings. Out of the corner of her eye, she caught sight of an illustrator just as he flipped back a page in his sketchbook.

He poised his charcoal on a fresh sheet of paper and shouted, “Miss Spreckelmeyer, look this way!”

Startled, she glanced at him, amazed as he quickly swept his charcoal pencil in large arcs across his pad, his movements culminating in a rough outline of her holding the wreath. The crowd quieted and she returned her attention to the waiting audience.

The confident words she had rehearsed in her daydreams fled from her mind. In a panic, she looked to her right and left as if she might miraculously discover the content of her acceptance speech hanging from the grand oaks lining the park.

She cleared her throat. “Ladies and gentlemen wheelers. I, um, I cannot begin to find the words to express how very much this honor means to me.”

A smattering of applause.

“Hey, lady!” A large man in a black summer jacket, black Derby, and black boots pushed his way to the front. “I’m a member of the Anti-Bloomer Brigade, and we don’t approve of this emancipation movement you lady wheelers are pushing on our female population. We believe that a lady should look like a lady. What are you thinking to parade in an outfit like that, and in front of an assembly like this? Why, you’re shaming God, our country, and the entire fair sex.”

The crowd hushed and the illustrator hastily flipped over a new page, sketching the heckler.

“I do not belong to any special dress-reform movement, sir,” she said. “I simply wear bloomers because they are the most sensible attire for a lady cycler.”

“Well, you might as well be wearing men’s trousers!” He leaped up onto the stage.

Essie stumbled back. Gasps rose from the crowd.

The diminutive editor-in-chief would be no match for the burly man, and she saw no sign of the officer who had escorted her to the podium.

“I’ve taken an oath,” the man said, lumbering toward her. “An oath to do everything I can to put a stop to this immorality. And I intend to do just that!”

He grabbed Essie’s arm. Three men standing close to the front scrambled onto the platform.

“Now, see here,” shouted one of them. “Unhand that woman!”

His words had the effect of a battle cry. And the most defining moment of Essie’s cycling career reduced itself into an all-out brawl.

The Ghost of Crutchfield Hall by Mary Downing Hahn
How It Ends: Part 1 - The Evaluation by Scott C Lyerly
The End Boxset: Postapocalyptic Visions of an Unstoppable Collapse by B.J. Knights
Murder at Wrigley Field by Troy Soos
SeducetheFlame by Ella Drake
A Man Alone by Siddall, David
Crossing the Line by Clinton McKinzie
The Tankermen by Margo Lanagan
The Hipster From Outer Space (The Hipster Trilogy Book 1) by Luke Kondor
Afternoons of a Woman of Leisure (9781101623565) by Bennett, Elizabeth
Our partner