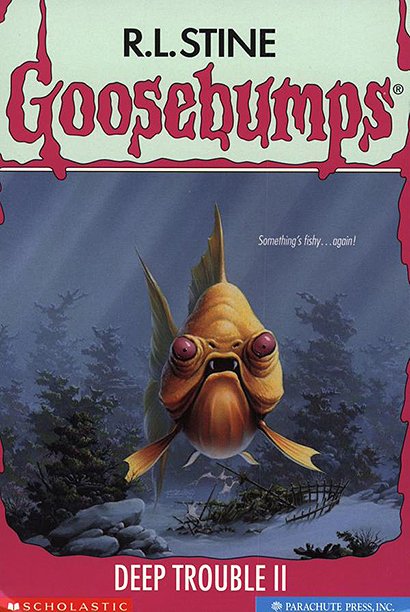 That’s what I thought when I arrived on the
Cassandra
for another
summer vacation.

Yes, I, William Deep, Jr., world-famous undersea explorer, am back.

I breathed in a big gulp of salty air. I gazed at the clear green Caribbean
sea around me.

My little sister, Sheena, stood beside me. But I pretended she wasn’t there.

She sort of ruined the atmosphere for me. She usually does.

The
Cassandra
is my uncle’s boat. It’s a floating research lab.

My uncle, Dr. George Deep, is a marine biologist. My parents sent me and
Sheena to visit him on our summer vacation. They sent us the year before too.

Dr. D. lives on the boat in the Caribbean all year long, studying tropical
fish. It’s fun for us. We get to swim and stuff. My uncle is really nice. And my
parents figure we’ll learn a lot about science and ocean life while we’re with
him.

Last summer I made one of the most shocking discoveries in the history of
marine biology.

I found a mermaid. A real mermaid.

No one believed me, of course. I wasn’t a grownup scientist. I was a
twelve-year-old boy on vacation in the Caribbean.

Know-it-all Sheena thought I was lying.

My uncle, Dr. D., thought I was making it up. He didn’t believe in mermaids.

Until I proved him wrong.

We didn’t tell anyone about the mermaids. Some really bad guys wanted to
capture them and put them in cages. To protect the mermaids, Sheena, Dr. D., and
I agreed to keep them a secret.

So the world will never know…

And now, I’m back!
I told myself.
Billy Deep, one of the greatest
explorers in the seven seas.

And I’m not a twelve-year-old kid anymore.

And this summer, I’m going to find something big. Something even more amazing
than a mermaid.

This time, the world will hear about it. This time I’ll be famous.

The fire coral glowed bright red. I snorkeled near it, careful not to touch
it.

I’d stepped on fire coral once before. It burned my foot like crazy.

They don’t call it fire coral for nothing.

I studied the coral wall. Neon-bright fish darted in and out of the delicate
holes. It was beautiful. There, under the water, everything seemed calm. Quiet.
Peaceful.

But I knew better. I was an experienced snorkeler. A snorkeling hero.

An untrained swimmer wouldn’t have noticed it. That little ripple in the
water. The way the fish all suddenly disappeared.

But I felt it. That whiff of danger.

Something was coming. Something deadly.

I whirled around—and faced the intruder.

“
WHOOOA!
” The snorkel flew from my mouth as I cried out in shock. An
octopus! It rose up in the water, its purple body
as big as mine
!

I shoved the mouthpiece back into my mouth. And frantically tried to thrash
away from it.

But before I could get moving, I felt something cold and soft wrap around my
throat.

A tentacle as thick as a human arm.

Its suction pods snapped to my skin. It started to pull me… pull me down.

Gasping for breath, I lifted my head out of the water. And let out a choked
cry for help.

I felt another cold tentacle slide around my waist. And then another around
my chest.

I thrashed and kicked. But the huge creature was too powerful. The big
suction pods made loud sucking sounds as they tightened against my skin.

Until everything went black.

I wasn’t losing consciousness. The blackness that washed around me was
octopus ink.

I shut my eyes. Twisted and squirmed.

But the tentacles pulled harder. Pulled me down into the inky blackness.

I choked and sputtered. And struggled up to the surface.

The water tossed and churned, black with octopus ink.

The big suction pods bit into my bare skin.

The tentacles tightened… tightened around my ribs, my stomach.

My lungs felt about to explode.

There must be a way to make the octopus let go.

With a last burst of strength, I slid my right arm free.

Now what?
Now what?

I stretched a finger toward its throbbing, purple belly.

Red and yellow stars flashed before my eyes. I knew I had little time. I was
about to pass out any second.

I reached toward the big throbbing body. With my last bit of strength, I
wriggled my fingers. Please let this work, I prayed. Please… Then I started
tickling.

My fingers tickled the purple belly.

Its big body heaved—and it shoved me away.

“Stop it, Billy!” the octopus whined. “I hate your stupid jokes. Stop
tickling me!”

Then the octopus pinched me.

Okay, okay. So it
wasn’t
an octopus. It was my little sister, Sheena.

Sheena always spoils my fun. She has no imagination. She hates to pretend.

Well… it’s true that she doesn’t look much like an octopus. She looks a lot
like me, actually. Skinny, with straight black hair. Hers is long, and mine is
short. We both have dark blue eyes and bushy dark eyebrows.

She’s younger than I am. She’s only eleven. But she acts like an old lady
sometimes. She hates games. She likes cold, hard facts.

“What were you pretending this time?” Sheena teased. “That you were a
tickle-fish?”

“None of your business,” I answered. She would never admit that I was a great
undersea explorer. Had she forgotten about the mermaids?

It didn’t matter. Other little sisters look up to their big brothers. Not
Sheena.

If I told her I was pretending she was an octopus, she’d never stop teasing
me.

“You’re a moron, Billy,” she groaned.

Do you believe she calls a great undersea explorer a
moron
?

“I’ll show you,” I replied lamely.

I love to play tricks on Sheena. It isn’t easy to fool her.

But I had an idea. I thought of a mean trick to play on her that would scare
her—but good.

I swam back to the boat.

I flipped my mask up and climbed aboard the
Cassandra.
It was a big,
sturdy boat, about fifty feet long, with a large open deck. Below deck were
research labs, a galley, and a few cabins for sleeping.

The white deck steamed in the sun, deserted. It was about noon.

Dr. D. must be down below, I realized. Perfect.

I didn’t want him to see me and blow my trick.

I reached under a stack of life jackets. I pulled out a square, gray vinyl
pillow I’d hidden there.

I stared out toward the reef. Sheena was busy snorkeling. She wasn’t looking.

Here was my plan: I was going to swim underwater, holding the gray pillow
over my head. I’d hold it so one of the corners pointed up. You guessed it. Like
a shark’s fin.

Then I’d swim at Sheena as fast as I could. She’d think a shark was headed
straight for her!

It would scare her to death. I couldn’t wait to hear her screaming to me for
help.

“We’ll see who’s a moron,” I murmured to myself.

I slipped back into the water. Holding the pillow in sharkfin position, I
started kicking. I swam underwater toward the reef. Toward Sheena.

After a few minutes, I bobbed up for breath. She hadn’t seen me yet.

Then I heard them. At last. The screams.

I couldn’t stay underwater any longer. I had to rise up so I could laugh in
her face.

I popped my head above the water.

Hey! Sheena was swimming frantically toward the boat. She was still screaming
like crazy.

But she wasn’t looking in my direction. She hadn’t even seen me.

“Shark!” she cried again. She made a frightened motion toward the reef.

I saw it too. A huge sharkfin! A
real
one!

“Huh?” I let out a terrified gasp.

The shark was as big as a
whale
!

Where did it come from? Dr. D. had told us there were no large sharks in the
area.

I guess no one told the shark!

It rose up, tossed by a wave. And I gaped at its silvery-white body—as long
as a canoe!

It snapped its massive jaws. The
CRAACK
echoed over the water.

“Whooooa!” I let go of the pillow and paddled for the boat as fast as I
could. My heart raced. The water felt as thick as mud. Why couldn’t I swim
faster?

The gigantic gray fin cut through the water like a powerboat.

The shark sped straight for us.

Sheena and I thrashed toward the boat. I didn’t glance back again. I didn’t want to see how close the big shark was!

Gasping, my entire body aching, I reached the
Cassandra.
I grabbed the
side. Almost safe. Almost.

Sheena scrambled up the ladder ahead of me.

“Hurry!” I shouted. I clutched the ladder and glanced back.

The shark roared closer. So close, I could see its glassy black eyes. And its
mouth full of jagged teeth.

“Sheena, go!” I screamed. I shoved her up onto the deck and scrambled up the
ladder.

“We made it!” Sheena gasped.

Gasping for breath, my chest heaving, I stared over the rail.

The shark kept coming! Like a submarine with teeth!

I let out a hoarse wail as the huge fish slammed into the side of the boat!

I grabbed the rail and held on.

I braced myself for another jolt.

The shark disappeared into the churning water.

Sheena and I ran to him, screaming, “A shark! A shark!”

The water gleamed calmly now. Soft waves splashed against the side of the
boat.

The monster shark had vanished.

“Billy—there is nothing out there. What are you talking about?” Dr. D.
demanded.

“There
was
a shark! A huge shark! It chased us,” Sheena cried
breathlessly. “It crashed into the boat!”

Dr. D. rubbed his bald spot. “I told you two before. I checked the radar. I
checked out all of my sonic surveyors. There are no large sharks in this area.”

He stared me in the eye and asked, “Are you sure, Billy? Are you sure you saw
a shark?”

“We’re sure!” Sheena insisted. We both knew he’d believe her before he’d
believe me.

We followed him below deck to one of the labs. Dr. D. pointed to a large tank
in the corner. It held a silvery fish the size of a big dog.

Sheena gasped. “Wow! I’ve never seen a fish like that before!”

I stared at the fish as it swam around in the tank. It looked sort of
familiar, but I didn’t know why.

“I can’t identify it,” Dr. D. went on. “I’ve never seen a fish this size that
looks like this. I’ve been searching through all my books, but I can’t find it!”

He pointed to a stack of books on marine biology. I picked one up and flipped
through it. It had page after page of cool color photos of all kinds of fish.

Dr. D. glanced over my shoulder as I examined the book. “It can’t be in that
section, Billy,” he told me. “All those fish are tiny.”

I turned a page, looking for the big fish section. Then I turned another page—and gasped.