Read Defending No Where (The No Where Apocalypse Book 3) Online

Defending No Where (The No Where Apocalypse Book 3) 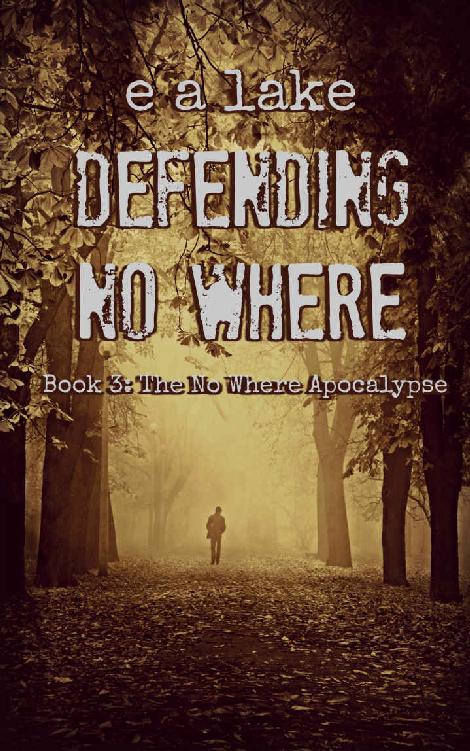 Other Books by e a lake

This book is a work of fiction. The names, characters, places and incidents are products of the writer’s imagination or have been used fictitiously and are not to be construed as real. Any resemblances to persons living or dead, actual events, locales or organizations are entirely coincidental.

All events portrayed are made up in the authors mind. As such, none are real. However, they are intended to give the reader pause to consider what a alternate future may look like.And since I get to make that future up in my head, some things just aren’t going to make sense to everyone. Too bad.

All rights reserved. No part of this book may be used or reproduced in any form whatsoever without written permission of the author.

Also by e a lake:

WWIV - Hope in the Darkness

(Book 1: The No Where Apocalypse)

(Book 2: The No Where Apocalypse)

(Book 4: The No Where Apocalypse)

For my father, Jim Stevens.

In No Where he would have known just what to do.

“Sometimes you have to travel a long way to find what is near...”

Bones! I’d found bones in Dizzy’s backyard. In the spot where he had told me, once upon a time, that his dad was buried.

“What a moron,” I whispered, checking quickly to be sure I was alone. I was.

Marge was with me, but she didn’t want to take part in the actual burial. According to her, seeing Dizzy’s charred remains would have been too much for her to handle. After I’d finished and covered the hole, then, and only then, would she come out and pray for our friend’s soul.

I wiped my brow with a red-checkered handkerchief Lettie had given me a few years back. The sun was blazing hot for early May. Or at least what we thought was early May. Truth was, we had no idea.

Nate, Marge’s youngest, had spent the last of the winter months trying to figure out how long everything had been gone. According to the rotted tires and rusting body of my Jeep, it had been plenty long enough. But the ugly times marched on, with no hope or end in sight.

According to Nate, we were at Day 1,000 of the apocalypse. Or somewhere close. He called it May 9
th
. I had no better information to go off of and not a lot of extra time on my hands, so I agreed.

Unlike my young friend, I had spent the last of the snows plotting my revenge against the people responsible for Dizzy’s death. The plan was simple: find them, kill them. Every last one of them. All I needed was their location. With any luck, I’d have that within a week or two.

I poured the sack of remains into the sandy dirt, covering my face as they fell. For something six weeks old, they sure stunk. Only a small amount of flesh remained of Dizzy, just a little on his skull. Most had been burned away, while various northwoods creatures scavenged the rest. It didn’t seem to me like a proper ending to such a unique character. But we were living in different times and had been for almost four full years. And would, I believed, for at least the rest of our days on Earth.

“You almost done?” Marge called out from the door of Dizzy’s dilapidated trailer. Poor thing, I knew what she found inside wasn’t pretty or flattering. But she claimed to know what she would discover.

I grabbed another shovelful of dirt. “Just got to cover it!” I shouted back.

Almost time to say one last goodbye my friend
, I thought, watching the earth sift through what was left of his ribcage.
I will get them for this, Dizzy
.
I promise you that.

Joining Marge inside, I waited for my eyes to adjust from the bright sun. The trailer was just as crappy as I’d remembered. Nothing that a gallon of gas and a match wouldn’t fix.

She paged through some of Dizzy’s unique collection of reading material — not that I believed he really read much.

“He certainly had interesting tastes,” she said in a tone that was less foul than expected. “Most of these women have huge breasts. Not that many of them look very natural.”

She peeked over at me. “I wonder what he saw in me.” She held up a page with a picture of a large-breasted blonde and I grinned. “I’m far from this size.”

“I think he found the natural beauty you have to be too undeniable,” I replied, plopping on a spot of the dusty couch. “He always claimed he’d never come back here once he found you. Some consolation in that, I suppose.”

She seemed un-offended. “Tom loved me and was honest about his past.” She spread her arms wide. “Even all of this. Though there’s more here than I expected to find.”

“I’m sorry he’s gone, Marge.” God, I was pathetic. She was still hurting from his loss, and for the past six weeks, all I could ever say was the same old line.

At least this time it hadn’t brought her to tears as usual. She nodded ever so briefly. “I know. And I know you miss him too, Bob. He was a good friend to all of us. And a pretty decent boyfriend for me.”

Well, that was certainly true. He doted on the woman like no other I had ever seen. If she got up to fetch a glass of water, Dizzy always beat her to it. She needed a blanket, it was delivered with a smile and a small kiss. If she ever needed a hug, there he was. Hell, many times I wanted Dizzy to take care of
me
like that.

“What are we going to do with this place?!” she exclaimed, flinging cupboard doors open.

I sighed. The truth seemed so cold. “Scavenge it,” I finally replied, rising to help her look for anything valuable. “After that,” I eyed her cautiously, “probably burn it to the ground so no one else moves in close. No one bad at least.”

I felt arms wrap around my waist; small shakes from her body echoed through mine. I placed my hands atop of hers.

“I’ll make them pay,” I whispered, feeling her head nod against my back. “They’ll all pay. I promise you that.”

Chatting as we strolled, the two-plus mile walk took no time at all. We talked about Dizzy — Tom, as Marge called him — and all of his unique qualities. We covered Violet and her new arrival, Hope. We agreed she was the most beautiful thing in our world, and probably would be for a long, long time. We even spoke about our feelings of being left in a world that had so little to offer.

And we had plenty of little.

The sun felt good on my face and bare arms. Winter, again, had lasted far too long. Lettie said it always did here in Michigan’s Northern Peninsula. Almost four years in and I still wasn’t used to it.

My stomach grumbled, reminding me of our most pressing issue. I needed to take a deer, and soon. Soups with acorns and fiddlehead ferns weren’t enough to hold me over anymore.

Turning off Dizzy Dive, I noticed people on the road in the direction of our cabin. Studying them carefully, eyes never leaving them, I slipped my 45 from behind my back. We hadn’t seen but a few people since the snow melted. Nevertheless, any stranger was a potential danger to us.

I eased my grip when I recognized Daisy’s smile. I should have known it was her just based on that stupid sunbonnet she loved to wear. It had to be the only one in existence…with the exception of Libby’s that matched her mother’s.

“How’d everything go?” Daisy asked as we met and stopped. Her arms wrapped around Marge, giving her the comfort I couldn’t. “I’m so sorry, Marge. We all miss Dizzy.”

When Daisy said, “We miss Dizzy…” and “…so sorry…” it sounded so sincere, so real. I could say the same exact words, but it always sounded terrible coming from me. But she was a better person than I, in so many ways. That was merely one.

Exchanging a few pleasantries, my eyes wandered further down the road, some quarter mile past my cabin. The two figures in the east ditch looked familiar. I imagined the tall one was Nate. Libby was likely the other, which could only mean one thing.

“We should get back,” I said, trying to turn Daisy. She resisted. I was right. “I need some water.” I tried to make it sound like an urgent request. Still, she blocked my way.

“Let me guess…” I continued, my face twisting as I spoke.

Daisy raised her delicate hands and placed them on my chest. “She’s just being a little fussy, that’s all,” she said, sounding sweeter than a girl accepting her first date. “And poor Vi got a little teary. So great-grandma Lettie is trying to smooth things over.”

Tight-lipped and tense, I shook her words away. Marge gave Daisy’s arm a squeeze and hustled home where she was undoubtedly needed.

“This is getting old,” I said, watching a screeching blue jay hop from branch to branch in a dead pine. “That little thing screams more than anything else.”

Daisy hugged me, as if she thought that would help. “Oh, it’s not that bad, Bob.”

I pointed down the road. “Then why are Nate and Libby nowhere near the house?” I had her, and could sense she knew it as well.

“Lettie says Vi’s milk hasn’t come in fully yet,” Daisy explained smoothly, still holding me in place. That meant the screaming was in the world ending range. Whether baby or mother was the screamer was yet to be seen. “And poor Hope gets more air than nourishment. She needs another alternative, Hope does. Maybe real milk would help? She hardly ever drinks any water.”

I recalled the night the tiny girl came into our lives, some two or three weeks back. Lettie thought at first Violet had enough milk. And then she didn’t. Forcing as much water as we could down the mother’s throat helped a little at first, and then it didn’t. We couldn’t catch a break the past few months.

We had one baby bottle, something Marge found stuffed in some old medical supplies she’d brought. Two diapers and a bunch of rags weren’t going very far. And now, the complete demise of a mother and her milk, the lifeline that could keep the baby alive…and quiet. This really wasn’t my problem, but my housemates — and the woman I loved — made it mine.

We all feared yet never spoke of the same thing. I could see it in every other adult’s eyes, and was sure they could see it in mine. Heck, even Nate had to have known and wondered what we all did. Just how long could a baby survive on little more than love?

The solution to our worries required a long dangerous walk on my part, one that I’d put off for the past week. Now I had no choice. An innocent baby needed my help. Hope needed me.

“So you go back past Dizzy’s place until the road ends…” Lettie instructed, drawing at the same time. I already knew where the Wilson place was. I needed different information.

“Am I gonna get shot, Lettie? That’s what I really need to know.” She glanced up at me and tightened her lips. Not exactly the response I was hoping for.