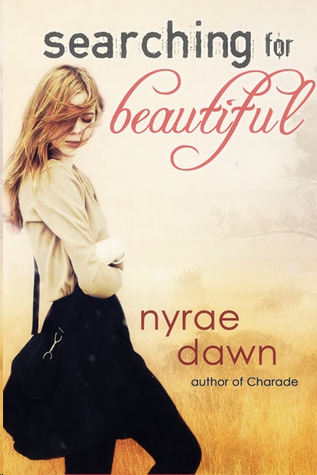 Other books by Nyrae Dawn

L
UCK OF THE
D
RAW

Other books by Nyrae Dawn

Copyright © 2014 by Nyrae Dawn. All rights reserved, including the right to reproduce, distribute, or transmit in any form or by any means. For information regarding subsidiary rights, please contact the Publisher.

To my girls, Mckenzie and Kelsey. May you always know how beautiful you are, without having to wait for someone to tell you. Real beauty comes from the inside and you’re capable of creating your own beautiful. I see it shine from you every day.

One, two, three, four.
I focus to slow my breathing. In, out, in, out, trying to make the breaths stretch slowly, closer to tortoise rather than hare, like they’re rushing right now. My palms sweat, making my hands stick to the steering wheel, almost like they’re in clay on my pottery wheel.

Why am I so nervous? I shouldn’t be. This is Jason and he loves me. How many times has he assured me I can tell him anything? That we’re connected…soul mates, who were lucky enough to find each other in this crazy, screwed-up world we live in.

More than that, he likes it when I talk to him, when I tell him what’s inside me. Because at home, all he has is ugliness. Fighting parents, a dad who is always putting him down and calling him names.

I’m his haven. His beautiful.

Funny how out of all the billions of people in the whole wide world, I found him. That he calls me his beautiful when that’s what Dad always called Mom. Not in the same words—la mia bella signora is what Dad used to call her. My beautiful lady. That’s how I knew Jason and I were meant to be. It was a sign that I’m destined for a love just as true as my parents had. Just like I always felt it was destiny for them to adopt me. She was meant to be my mom.

My heart starts to calm at the memory of Jason whispering those words to me. Of his breath against my ear. His body wrapped around mine.
We love each other,
I remind myself, so I shouldn’t be scared to tell Jason. Now the rest of it? That makes my stomach turn and my head pound. Dad is going to freak.

After pulling the keys from the ignition, I get out of my car, running my hands down my red dress. It’s the one I wore the night we met.

If red wasn’t my favorite color before, it definitely is now.
He’d touched my hair, the red that surprises everyone, since Dad is Italian. But then, it’s not as though I would look like him.

That quickly, it had been like Jason and I knew each other forever. Did he know then? Feel the draw he told me about later? Feel the same spark with me that Mom always talked about with Dad? I hadn’t at first. I didn’t want to feel anything when I met Jason. Caring hurt, and I had enough hurt to last a lifetime.

I love him now, though. That’s what matters.

Red hair…red dress, and now red cheeks. I never knew blushing could be so damn sexy…

Half of me wanted to laugh at him. I mean, really? How dumb did he think I was? At the time, it was obvious his words were lines, but instead of laughing, I talked to him. He talked back, and nothing’s been the same ever since.

Smiling, I start to walk toward his brother Sam’s house. Luckily, he’s always out of town, so we never have to worry about seeing him. It’s the perfect place for Jason and me to meet.

The front door swings open before I get a chance to knock. Jason’s there, his blond hair messy like always. He’s wearing a pair of shorts, no shirt. Even after the past three months, I still shiver seeing his toned body. The ripples of his abs and firm arms. He works out like crazy.

“Hey, babe. About time you got here. Sam will be home soon, so we don’t have much time to hang out.”

As soon as he pulls me inside, his mouth is on mine. So recognizable, that mint tinged with smoke. I’ve always hated smoking, which is why he sucks on the mints. But still, the mixture is him. I would know it anywhere. It’s not that I necessarily like it, but it’s familiar. And familiarity is important.

Tell him, tell him, tell him.
The words creep into my head. I try to slam the door on them, but they’re like his smoke, floating under the door and filling the room until I’m almost suffocating on them. “Jason…” I pull back a little bit. “I want to talk to you, remember? I have… I have something to tell you.”

He smiles, threading his fingers through mine before pulling me farther into the house. Into the living room. “Sorry, I just missed you. You know how irresistible you are to me.”

I feel the heat burning my cheeks.

Somehow, it’s those words that give me the courage I need. He loves my blush, my laugh. How many times has he told me he loves everything about me?

Love will make it okay.

“I…” I grab his other hand, too, needing to touch him as much as I can, wanting to look him in the eyes when I speak to him. “I need to tell you something important.”

He cocks his head a little, his hands tightening. “What is it?”

“I’m…”
Push the words out, Brynn.
They’ve been eating me alive for weeks and now I just need to
say
them. My hands start shaking and briefly I wonder if he can feel it. My throat feels clogged, like words or breath can’t get through. They’re trapped behind a barrier of fear.
Do it!
“I’m pregnant.”

The sentence somehow sucks all the air out of the room. It’s suddenly hard to breathe again. Jason’s hands grip mine tighter and tighter. I steady myself, proud of how I’m handling this. I spent two days crying before today, freaking out. I promised myself I wouldn’t freak when I told Jason.

“I’m pregnant…with a baby. Duh, of course it’s a baby, but your baby…
our
baby.” I step closer to him, but he pulls away. His hands jerk out of my grasp.

“How the fuck are you pregnant, Brynn? It sure as hell can’t be mine. I’ve worn a condom every time we’ve been together. Every. Single. Time.” His words make me flinch. They’re like a whip biting into my skin.

Tears blur my vision; anger tries to block them. I’m shocked that Jason could accuse me of something like this. Then I remember the stories he’s told me, the anger he lives with every day. I promised Jason I wouldn’t be like that.
We
wouldn’t be that way.

But he made
me
the same promise, too.

Locking eyes on him, I notice his face is red, see the angry set of his jaw as he crosses his arms. Who is this? Jason has never yelled at me before. “I don’t know… I don’t know. But I’m pregnant. I swear. I’ve heard stories about girls getting pregnant even with a condom. Maybe it, like, had a hole in it. This isn’t something I would lie about, Jason. I’ve never been with anyone but you. Only you. You know that.”

My hands shake. My heart, too. I love him.
But he thinks I would cheat on him.
The anger tries to push its way in again, but I swallow it down until it creates this sort of vacuum inside me instead. Blood rushes through my ears, making it difficult to focus on anything else.

“Hate to break it to you, Brynn, but if you haven’t been with anyone but me, you wouldn’t be knocked up right now.”

A chill sweeps over me. The air conditioner? Whatever it is, it feels strong enough to knock me over. No, break me apart, blowing pieces of me around the house. I shake my head, trying to make sense of what he’s saying. Trying to swallow down the need to vomit. “How can you say that? You know I love you. I’d never. I love
you
, Jason.”

He laughs. I used to love the sound, and now it’s beating me into the ground, sounding so different from any of his laughs before. “Didn’t you tell me your little boyfriend broke up with you the day before we got together? I’m sure you loved him, too. Grow up. I swear, you’re so naive.”

How many times have I told him I never loved Ian? The only other time I thought I was in love, I was a dumb kid… Kid…

This can’t be happening. Jason can’t be treating me this way. Not when I’m going to have our baby. A
baby.
I clutch my stomach. The word suddenly starts repeating over and over in my head, blurring and mixing with Jason’s angry accusations until it’s all I can hear or feel.

“Jesus, I’m such a fucking idiot!” He runs a hand through his hair. “How long have you known? Who told you? Figured you’d try and trap me, did you? Hate to break it to you, but it’s not going to happen.”

“What?” The word manages to tumble out of my mouth.

He’s pacing now, and my eyes dart around the room, following him. It’s a struggle when I can’t stop his voice in my head or the nausea in my stomach.

Hate to break it to you, Brynn, but if you haven’t been with anyone but me, you wouldn’t be knocked up right now.

Dizziness twists and turns around me, pulling me in, dragging me under.
Jail… Get rid of it…

Oh, God. I’m pregnant. I’m sixteen and pregnant. He wants me to get rid of our baby. My dad will never talk to me again.

With Jason by my side, I thought it would be okay. Thought we could make it work. I’d have someone else to love.

My eyes flutter and my legs go weak. I crumple to the floor, not sure what else to do. “Shit,” Jason curses from above me. An eternity later, he joins me on the floor. “Shhh, Brynn. I’m sorry. I didn’t mean… You just freaked me out. I… Shit, baby, you can’t tell anyone. I love you so much and hate to say this to you, but you can’t tell anyone. You have to get rid of the baby and no one can know it’s mine.”

He wraps his arms around me, pulling me to his lap. God, I want to feel safe here, the way he’s always made me. This is the Jason I know. The one who’s calm, sweet, and loving, not this man flip-flopping between anger and affection that I’m seeing now.

Believing Is Seeing by Diana Wynne Jones
The Cruel Prince by Holly Black
Enchantress by Constance O'Banyon
The Morning Gift by Eva Ibbotson
Surviving Us by Erin Noelle
Heart of the Incubus by Rosalie Lario
Midnight Magic by Shari Anton
Discovered by Brady, E. D.
The Butcher by Jennifer Hillier
With His Ring (Brides of Bath Book 2) by Cheryl Bolen
Our partner