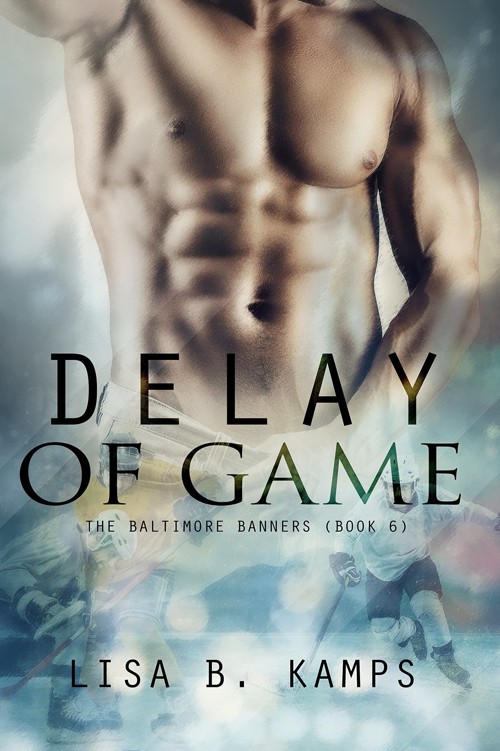 Lisa B. Kamps
DELAY OF GAME

All rights reserved. Except for use in any review, the reproduction or utilization of this work in whole or in part in any form by any electronic, mechanical or other means, now known or hereafter invented, including xerography, photocopying and recording, or in any information storage or retrieval system, is forbidden without the express written permission of the author.

The Baltimore Banners© is a fictional professional ice hockey team, created for the sole use of the author and covered under protection of copyright.

All characters in this book have no existence outside the imagination of the author and have no relation to anyone bearing the same name or names, living or dead. This book is a work of fiction and any resemblance to any individual, place, business, or event is purely coincidental.

Other titles by this author

Other titles by this author

Every writer needs a great support group, and I was very fortunate to find the best. This is for all my hearties at Hockey With Heart! Thanks for the wisdom, support, venting, education, sprints, rants, and shared stories. You guys are the best!

And for the greatest bunch of crazed hockey fans around: all the Sinners from
The Sin Bin.
Thanks for all the support and pictures and stories and fun and friendship (and the pictures, definitely the pictures!). You guys rock!

Other titles by this author:

Emeralds and Gold: A Treasury of Irish Short Stories
(anthology)

Justin Tome squeezed his eyes shut and tried to take a deep breath. Something was blocking his mouth and nose, something soft. A brief spurt of panic seized him until he realized it was a pillow, too soft, too fresh-smelling.

He turned his head just a fraction of an inch, just enough to take a deep gulp of air. Shit. What was that smell? Sour, putrid. His stomach rolled and he clenched his jaw, taking another deep breath through his mouth as the world spun around him.

He reached out with his left hand, groping blindly, looking for something to hold on to, some kind of anchor to hold him in place until the spinning stopped. His fingers closed around something soft and warm. Material of some kind. He fisted his hand in it and slowly pulled it toward him, holding it to his face. As an anchor it pretty much sucked, but it wasn't like he was in any shape to get up and look for something better.

The spinning slowed down, just enough that he could be reasonably certain he wasn't going to hurl. He took another breath, a cautious one through his nose, and felt his stomach clench and roll.

Shit. Was that smell coming from him?

Images flashed through his mind, nothing more than fragmented pictures that made little sense.

A sheet of ice, scored with gouges.

The sound of a loud buzzer and noisy cheers.

Something hard and sharp catching him under the chin. An explosion of pain and fury.

The flash of scar glowing red as angry words echoed in his ear.

The last came back to him with shocking clarity, the memory vivid in taste and smell. Justin's mouth filled with moisture and he swallowed, groaning as his stomach rolled once more. He pushed up with hands, trying to raise himself, and fell face-first back into the mattress.

Where the fuck was he?

Shit. Where was he? What the hell had he done last night? Gone out, got drunk. Again. But then what?

He groaned, a long drawn out noise that sounded like the moan of a dying animal. The noise echoed around him, bouncing inside his throbbing skull with enough force to send his head rolling from his shoulders. Christ, wouldn't that be a blessing in disguise?

He had to get up, find out where the hell he was, what the hell he had done this time. He pushed against the mattress again, willing his body to move, to listen, to just work dammit.

Justin finally moved enough to roll over onto his back, his body covered in sweat and his heart pounding heavy in his chest from the exertion. He lay there, panting, waiting once more for the world to stop spinning, waiting for the throbbing in his head to ease.

"If you hurl again, you're cleaning it up this time."

Shit. He recognized that voice.

He pushed himself up faster than he thought he could move. Too fast. He grabbed his head and bent forward, another groan escaping between dried parched lips. Shit, he was going to hurl.

Except he apparently already had.

He wanted to say no, wanted to shake his head and yell and run from the room. But he couldn't do any of those things, could barely move. If he moved, his stomach was going to turn itself inside out and come shooting out of his mouth.

He took a breath, just a small one, barely able to stomach the smell. Then he turned his head and cracked one gummy eye open. The world spun and twisted before righting itself and coming into focus. He forced his other eye open and stared, not believing what he was seeing and hoping it was nothing more than a dream.

Not a dream. A nightmare.

Valerie Michaels, his teammate's sister, was standing next to the bed, dressed in a pair of loose flannel shorts and tank top. She stared down at him, holding something in her right hand. A small smile teased the corner of her full lips and amusement flashed in her dark eyes. Her hair, long, thick, luxuriously black, hung over one shoulder, the ends curling just below one full breast.

More images whirled through his foggy mind. His arm around Val, his mouth nuzzling her neck as she…as she what? Justin squeezed his eyes closed, thinking, trying to remember.

As she put him in a car. Helped him inside. Inside where?

He cracked open one eye again and looked around, trying to make out details in the murky gray light. A light oak dresser and matching mirror against the far wall. In the corner, an overstuffed chair upholstered in some light-colored material. A four poster bed draped in some kind of frilly sheer shit.

Oh shit, he was in Val's bedroom. He had to be, it sure as hell wasn't his.

No. No way in hell. This couldn't be happening. He did not get down-and-dirty with his teammate's sister. No way. Not even falling down drunk would he be that stupid.

Why the fuck couldn't he remember?

He glanced down, groaning again when he saw his bare chest. Justin lifted the edge of the comforter and peered underneath. Shit. Shit, shit, shit. Naked as the day he was born.

"I'm not going to stand here all day and hold this." She stepped closer, thrusting a glass under his nose. "Here, drink it."

"What is it?" The words came out as a croak, rusty and barely more than a scratchy whisper. He cleared his throat and winced, then reached for the glass, surprised to see his hand shaking.

Justin froze with the glass halfway to his mouth, his stomach rolling once more. He clamped his mouth shut and shook his head, trying to hand the glass back to her. "I'll pass."

He peered up at her, not surprised to see her frowning as she stood there with both hands on her hips. Too close, she was entirely too close. Why the hell couldn't he remember what happened?

"Did—" The words stuck in his throat, refusing to come out. Shit, this wasn't good. He took a deep breath and stared into the glass, trying not to notice the small brown flakes floating on the red surface. He had to know, had to ask.

He cleared his throat and tried again. "Did anything…did we—?"

The words died in his throat, refusing to come out no matter how much he tried to force them. It didn't matter, though, not if the clear laughter coming from Val meant anything. Justin groaned again and closed his eyes, not sure if the laughter should reassure him—or insult him.

"No, nothing happened. Nothing was going to happen, either. I don't do drunks. Now drink up and go take a shower. Your clothes are in the bathroom, all washed and folded. And I wouldn’t waste too much time, because you have practice in less than two hours."

Justin blinked, trying to process the words as Val turned around and walked out.

She didn't do drunks.

His clothes were in the bathroom. His washed clothes.

More images whirled through his mind. Him stumbling, falling against a wall. Fighting with his stomach before losing the battle—and everything inside him at the same time.

Shit. Had he really hurled all over himself? Yeah, he had. And in front of Val, too. Christ, that was a new low, even for him.

A low rumbling voice appeared in the back of his mind, the words certain, accusing as they called him a fuck-up. Again. No matter what he did, Justin couldn't make the voice go away, couldn't make it shut up. And why would it? He'd been hearing the voice his entire life, for as long as he could remember.

And his father was right, he was a fuck-up.

Justin groaned, the sound desperate in his ears. Christ, would he ever learn?

He swung his legs over the side of the bed then stared into the glass. Screw it. Screw everything.

He raised the glass to his mouth and drank it down in one swallow, barely tasting it, barely smelling it. He placed the glass on the nightstand and stood, holding onto the edge of the mattress until he was sure he wouldn't fall.

And then it didn't matter, because his stomach clenched and heaved and a sour sweat coated his body, chilling him. Justin straightened, nearly fell, regained his balance.

And barely made it to the bathroom in time.