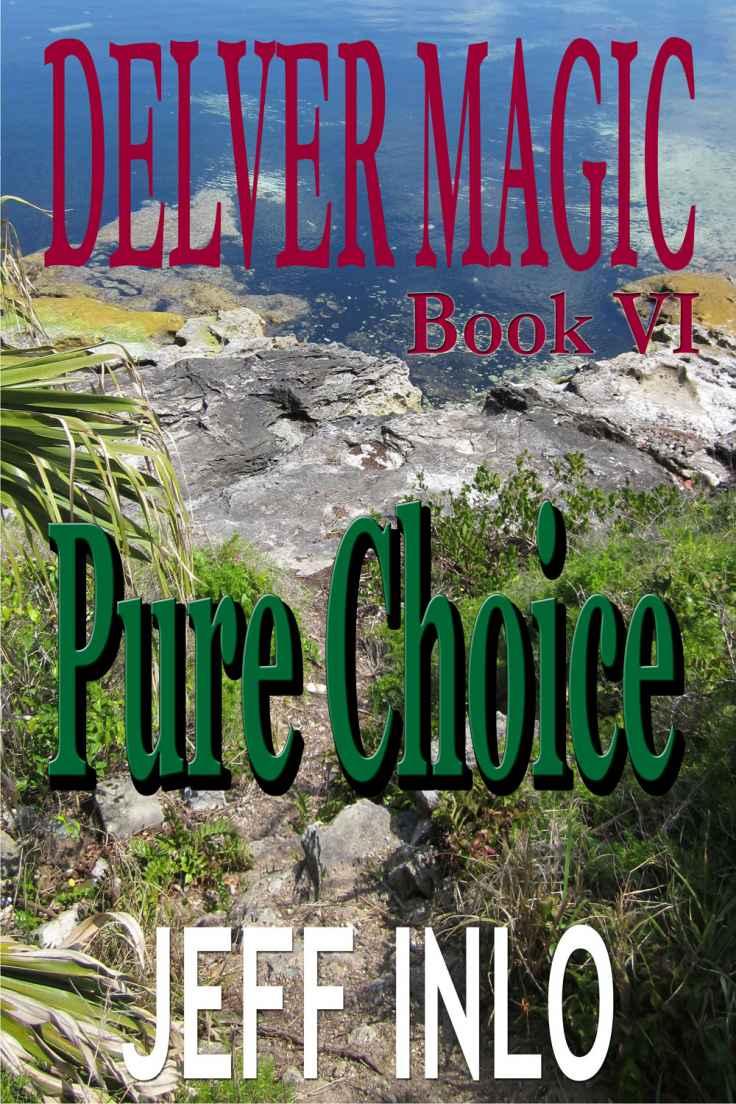 I have tried to make this eBook available in as many formats
as possible. If you encounter any difficulty with the formatting, please let me
know. Contact information can be found on my web site at
www.sitelane.com
.

When Do I See God?
(by Jeff Ianniello)

To Joan, for being
the optimist!

It appeared harmless and ordinary,
but if seen in direct light without shadow magic hiding its natural appearance,
it would have frightened everyone in town, even the most hardened soldier. Unlike
a pure shape shifter, the arasap lacked the ability to completely disguise
itself, but it could manipulate its figure to match the contour of any number
of creatures. Size was normally not an obstacle. The highly pliable property of
its supple, liquid-like substance allowed it to expand to the height of an
average tree or shrink to the size of an ordinary coin.

While proficient shape shifters
could take on almost any identity and mislead the most critical observer, an
arasap lacked the definition to mask itself on form modification alone. It
could not physically arrange its features to appear as anything more than a
transparent outline. To take on the full masquerade, it had to depend on magic.

As it walked through the town of Burbon,
the lone arasap shrouded its identity by sculpting itself into a generic human
form and then twisting the shadows around it. The creature relied on gloom much
the same way the illusionist alters light. Though not a powerful spell caster, it
utilized the gray magic to create the illusion it was nothing more than an
ordinary merchant. It influenced the shades of light to contrive a face
complete with aged lines and sagging skin, and it magically generated the image
of thinning hair, as well as a full set of clothes.

The arasap moved through Burbon at
dusk without raising the concern of the town guard it evaded at the gate or the
citizens it passed on the streets. It moved with quick, deliberate steps, like
a weary traveler bent from fatigue and hurrying to find cover before a coming
storm. It looked like so many other traveling merchants who entered the town
with the intent of making a fast sale and then heading back home.

To say the arasap walked on two
legs would be somewhat deceiving. Its grease like substance gave it only the barest
margin of solid form. With its profile shaped to include arms and legs, it was
able to mimic the movements of a human. That, however, was where its similarity
to the people of Burbon ended.

The creature did not have eyes for
it did not need to see. Instead, it had thin and flexible hair-like growths
that it could extend and contract at will. The tiny follicles covered its gelatinous
body and served as sensory receptors. They picked up light, sound, and scent,
and they allowed the arasap to gain complete awareness of its surroundings.

It also had no mouth... had no
need for one. It communicated with a form of telepathy, and it did not need to
eat to gain nourishment. Arasaps obtained nutrition from nonphysical sources
and in a manner that defied sanity.

It was not quite the search for
food that drove the creature down the streets of Burbon but an understanding
that sustenance would be forthcoming if it accomplished its task. It normally
would seek out novice spell casters or individuals unaware of their magical
talents, but an arrangement of extraordinary circumstances persuaded the
monster to seek a most unusual objective.

It would be the first, but it
understood that more would come. It would prepare the host for others, make it
easier for their arrival. It would have to share, but the harvest would be
rich. It would not feed immediately, but it knew that when the process began,
it would eat well. All it had to do was ensure it entered the proper host
undetected,

It would not ask for directions in
fear of revealing its presence, and so it relied upon what information it could
pick up from the surrounding humans. A few words from an overheard
conversation, a scent drifting from a chimney in the distance, and the recognition
of street signs allowed it to hone in on its target.

The fading light assisted the
arasap in its mission as it continued to stalk the shadows to avoid detection. Lonely
alleys allowed it to reach its ultimate destination unnoticed, but the interior
of the Borderline Inn was not quite as dark as the creature hoped. The arasap
was forced to use more of the magic at its disposal to strengthen its disguise.
Fortunately, it would not take long to complete its objective. It sensed the
woman the moment it entered the establishment. It could not have missed her, for
the total lack of magic within her was beyond repulsive to a creature that fed
off incantation remnants.

It waited off to the side of the
main room of the tavern. It appeared to check its pockets, but it was actually
monitoring the movements of the woman before selecting a table in an isolated
corner. When the timing was perfect, it quickly sat down and signaled to be
served.

Linda Acumen walked up to the
table. Something about the traveler unsettled her, but she had become
accustomed to strange occurrences and odd visitors. Her immunity to magic kept
her from touching the energy that others could use in a variety of ways, and
she shook off the troubling sensation as she had done numerous times before.

"Room and a meal, just a
meal, or something to drink?" she asked

As Linda swung around to return to
the bar, the stranger called out.

"There is one more
thing," the creature noted as it reached out and tapped Linda on the
shoulder.

No one was watching, and even if
someone had passed a glance to the lonely corner, another shadow spell
concealed the entire table. Not a single patron of the inn noticed the
disturbing sight as the arasap's masquerade slipped away and it became a thin
strand of jelly that slid across Linda's neck.

Linda tried to face the guest to
handle the additional request, but she could only do so as if moving in slow
motion. It seemed to take forever to complete the turn, and when she did, the
stranger was nowhere to be seen.

Someone or something was reaching
into Baannat's realm, stealing his magic. The slink ghoul almost harshly
rebuked the attempt, but instead, he decided to allow the theft to continue.
After all, there was little else that interested him at the moment. The rather bold
incident might lead to an amusing distraction.

Baannat had been cast into a realm
of nonexistence. He once held sway over more magical energy than any creature
in Uton and even found a way to avoid death, but victory always eluded him. He
had been defeated by the wizard, Enin, and by the upstart delver, Ryson Acumen.

As punishment, he was reduced to a
form that was neither physical or spiritual. His essence was a mix of the two
and as a result he was forced to maintain his existence in an empty void that
was beyond life... and death. He was the ruler of a realm of pure nothingness
and his only source of entertainment came from peering into worlds beyond his direct
control.

There was magic in his realm—not
the same kind that flowed through Uton or the dark realm—but a hollow energy
that hung in lifeless strands across the shadows of infinity. The slink ghoul
had developed a connection to the dead energy and when he felt it begin to
trickle out of his realm, it caught his interest.

Baannat watched the flow
carefully. When the pull became stronger, his annoyance grew once more. Despite
the momentary diversion the pilfering allowed, it angered him that anyone would
dare steal what he felt was his and his alone. But again, he held his wrath.
Even as his disturbed emotions bubbled with fury, he could not dismiss the fact
that the brazen act offered a diversion... and possibly an opportunity.

While he could not open portals to
escape his prison of shadow, he had limited access into other existences. He
could influence creatures outside of his shadowed realm, reach into the dark
lands or even into Uton with subtle manipulations. Yes, the theft of his magic
was an affront to his nonexistence, but the slink ghoul was always willing to
take advantage of someone else's mistake... and misfortune.

"It can't be the same
one," Sy Fenden growled. "They're quick, but river rogues don't
travel that fast, especially on dry land."

"How'd they get inside the
walls?" the soldier who just offered the news of another sighting asked
Burbon's captain of the guard.

"My guess? The drainage
ditches that run under the walls," the captain offered without much doubt.
"We have to let the water go somewhere... not too unreasonable to assume
at least one of these things would eventually follow the water flow, especially
with all the rain we've been having."

"But the ditches are gated at
the walls," the soldier responded.

"The gates rust and these
things are strong," Sy noted. "At daybreak, we'll check the grates.
I'm betting at least one will have been pulled free. It's not a surprise. The
only surprise is that more than one came in during the same time. Blast, I
thought these things were more territorial."

The guard captain considered his
options. His first concern was for the safety of Burbon's citizens.

"With two of them roaming
around, we're going to have to issue an alarm. I was hoping to isolate the
first one without causing too much clamor—didn't want to agitate it—but I can't
risk it. Inform the tower guards to signal a breach warning. Immediate
shelter... with no exceptions." That was all the soldier would need to
send to the towers, but Sy expanded on his orders to make them clear.
"Everyone goes to the nearest shelter and stays put. I want everyone
inside as soon as possible. I don't want people trying to race home."