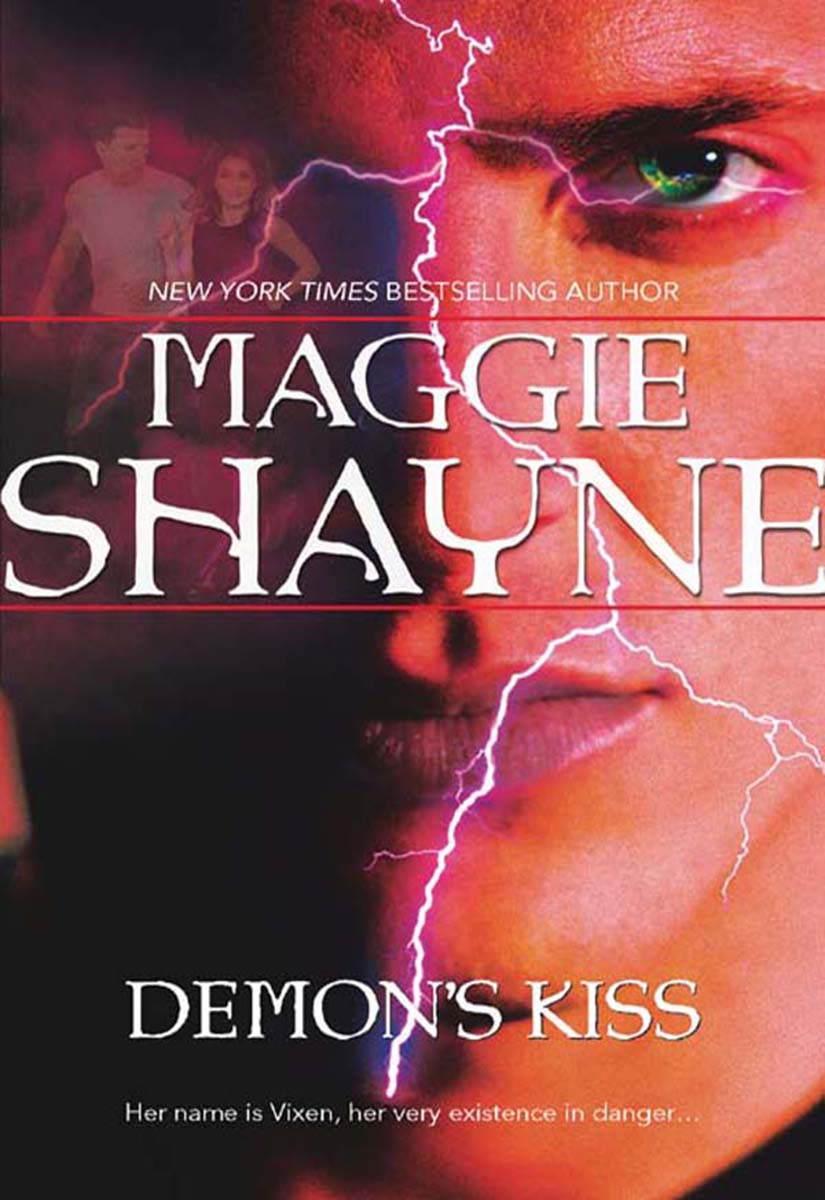 “I
need you to kill someone.”

Rhiannon stood on the leaf-strewn path where Reaper had agreed to meet her, long hair and longer dress dancing on the night wind, and she wasted no time on preliminaries.

As greetings went, it wasn't the warmest one he had ever received. But it
was
the most common.

“Of course you do,” he replied. “Why else would you have asked me to come?”

Her smile was slow. Her eyes held a dangerous glitter. “Normally, of course, I would prefer to do this sort of thing myself,” she told him, moving closer. Her sleek black panther moved beside her, each step slow, sinuous, silent, its head level with her hand, bumping against it every now and then. “But the circumstances forbid it, I'm afraid.”

“And what circumstances are those?” Reaper asked, curious. He began walking, remaining close to her, but not touching. He didn't like touching.

The hem of her velvet dress stirred the gold and russet leaves that lined the footpath. It was a trail that wound through a secluded park, high in the hills of Virginia, a wilderness tucked between cities, and a popular route among runners, cyclists, walkers and nature lovers. Right now, though, in the deepest part of the night, the park was deserted. The only sound to be heard was that of the wind, crackling across the few brittle leaves that still clung to the surrounding trees.

She didn't answer him, just kept walking at his side, her fingers scratching the top of Pandora's huge head every few steps, eliciting a purr from the panther that sounded disturbingly like a growl.

Reaper probed more deeply, using a tactic certain to work with the arrogant Rhiannon. He knew her well enough to know how to bait her. She was, after all, his maker. “This rogue you want killed must be the most heinous in history, if he has you too afraid to face him yourself.”

She stopped walking and swung her head around, a sharp, swift movement that brought her long raven hair snapping over one side of her face. “I fear
no one,
my friend. And you know it. I'd like nothing better than to break his bones one by one, while bleeding him in between.”

He nodded, knowing she was fully capable of carrying out the threat, and furthermore, would likely enjoy it. “So why call me?”

“Because he's not just a lone wolf, Reaper. He's the leader of an entire pack of them, a pack who will turn on anyone who threatens their precious alpha male. And as much as I hate to admit it, I'm not a lone wolf, either. Not anymore. I have a mate, Roland. I have friends, family, now. Precious childrenâimportant childrenâare a part of that family.”

He lifted his brows. “You speak of the mongrel twins born to the half-breed vampiress they call the Child of Promise.”

Her eyes narrowed. “Be very careful when you speak about those children, Reaper. I love them as if they were my own.”

He held up a hand, understanding. “I get it. You can't risk bringing the wrath of a pack of killers down on thoseâ¦
special
children. Well, you were right to contact me. I'm the perfect man for the job.”

“You sound awfully sure of that,” she said, calmer now. She pushed her hair behind her shoulder and resumed walking, staring upward as she did. He followed her gaze. It was a moonless night, crisp and clear, with stars glittering like ice chips from a cold, black sky. The chill air tasted of apples and smelled of rotting leaves. “You haven't even heard the details yet, so how can you know?”

“Because I
am
a lone wolf. I have no family or friends to worry about. Nothing is precious to me, and there is no one that I love.”

He shot her a look. “It's the absolute truth.”

He averted his eyes, looking anywhere but at her. “What boy?”

“Reaper, honestly. The mortal, with the baggy jeans and bad video-game addiction. Seth, isn't it?”

“He's hardly a boy anymore. And as you're aware, he's one of the Chosen. You know perfectly well that we vampires have no choice where those rare humans who possess the Belladonna antigen are concerned. They can be transformed, can become like us. It's not affection, Rhiannon. We're
compelled
to protect them.”

“Yes, I
do
know that. And I also know that for each of us, there is one of them with whom the bond is far stronger. Seth is that one for you.” She stared at him until she made him look back. “You care for him,” she accused.

“I care for no one. He's a nuisance. If I weren't forced by nature to look after him, I'd stay a thousand miles from him at all times, I promise you that.”

She thinned her lips, shook her head. “If that's true, then I pity you.”

“Don't waste your energy, Rhiannon. I'm an assassin. I was a killer in life, and I remain one in death. It's what I do.”

She studied him for a moment longer, then sighed and nodded. “The details, then. He calls himself Gregor, and he hunts throughout the Southeastern statesâhere in Virginia, the Carolinas and Georgia, that we know ofâtaking the innocent, the young, any victims he desires, and encouraging his gang to do the same.”

“No one knows. The trail of corpsesâthe victims he doesn't bother trying to hideâstarted appearing about a decade ago, as near as I can trace.”

“No one seems to know that, either.”

He frowned at her. “That's unusual.”

Reaper rubbed his chin. “I like to know all I can about a mark before I go after him, Rhiannon. Without knowing his age or the identity of his sire, there's no way for me to begin to calculate how strong he might be.”

She looked away momentarily. “Well, if it's too much of a challenge for youâ¦”

“I didn't say that.” He barked the words without thinking, then went silent, seeing the mischief in her eyes and the slight smile tugging at her full lips. She knew how to get a reaction out of him, too, he reminded himself. “Tell me what you
do
know, then.”

She nodded. “I have no idea how many are in his gang. Rumors run the gamut from ten to fifty. His apparent right-hand man is known as the Jack of Hearts, and slightly more is known about him. Probably because of the trail of broken hearts and empty bank accounts he tends to leave behind him wherever he goes.”

“And an excellent lover, or so I've been told.”

“Yes, and this isâ¦disturbing. Part of his gangâthe bulk of it, in factâis rumored to be made up ofâ¦creatures unlike any I've heard mention of before.”

He stopped walking, frowned at her. “Creatures?”

She blinked rapidly, scratching her cat's head more slowly as she considered her answer. “Bear in mind, this is second- and third-hand information. I only have rumors and reports to go by. But it's said these creatures are large, powerful blood drinkers, who seem to have no thought or will of their own. They obey Gregor mindlesslyâeven to the point of self-destruction.”

He lifted his brows. “Does such a creature exist?”

“I've heard of vampires who've learned to make slaves of ordinary mortals. They do this by drinking their blood and giving them a drop or two of their own in exchange. This leaves them weak and increasingly dependent upon the vampire, much as a drug addict becomes dependent upon his chemical of choice. But they're still mortals. Weak, eventually mindless, yes, but only mortals. These creatures are strong, large and, apparently, immortal. An entirely different breed. No one, not even the oldest among us, can guess how Gregor made them.”

Reaper nodded. “Clearly, we're dealing with a brilliant mind. I hate clever villains. What else do you know, Rhiannon?”

“Not much, I'm afraid. Only that Gregor and his gang are dangerous, a pack of rabid animals. They murder innocent mortals. They bring the danger of discoveryâand the wrath and hatred of those who already know about usâdown on the heads of every vampire in existence. They must be destroyed. But you'll need to be very careful.”

“Not to mention very well compensated.”

She pursed her lips and tugged a drawstring bag from her sash. He hadn't noticed it there, and no wonder. It was black velvet, like the gown itself. Holding it up so it dangled by its strings from her long, dagger-tipped fingers, she said, “
Very
well compensated.”

He took the bag, which weighed at least two pounds and jangled musically when he shook it. He didn't bother opening it. He trusted her. If she said it was fair, it was fair.

“One hundred thousand in gold. These krugerands are only the down payment. You'll get the rest when the job is finished.”

“A hundred grand, huh? You must really want this Gregor dead.”

“Not just me,” she told him. “The oldest, the most powerful and the wealthiest among us have contributed to this cause, Reaper. You have their blessing.”

“The blessing of the damned. That's rich.”

She tipped her head to one side, frowning. “You're exceedingly bitter, aren't you?”

“I'm only trying to tell you that if you need assistance, there are many of us waiting to offer it.”

“I work alone.” He turned and walked away from her.

“Contact me when it's done,” she called after him, that air of command in her voice a note that was familiar to him and natural to her.

“I won't need to,” he said. “You'll know. I will be in touch all the same, though, to collect the rest of my payment.” He tossed the pouch of gold coins and caught it again as he moved out of sight.