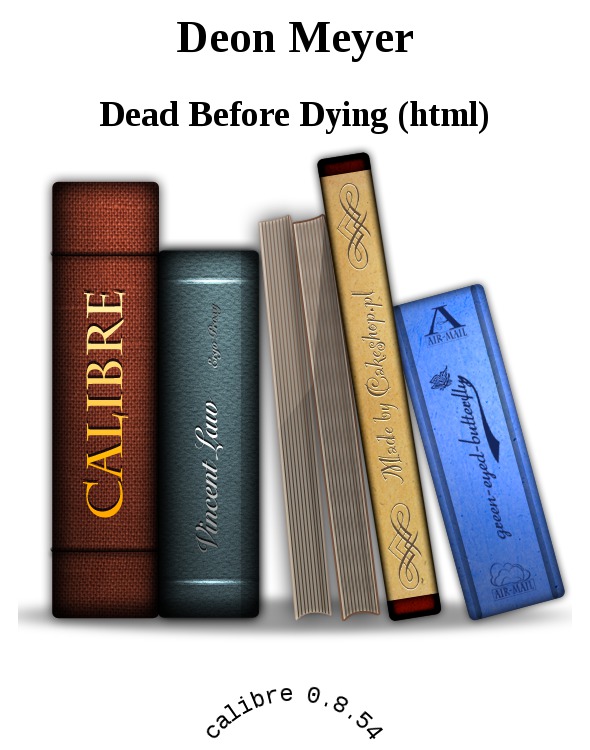 Visit our Web site at www.HachetteBookGroupUSA.com.

First published in English in 1999 by Hodder and Stoughton, a division of Hodder Headline, and in Afrikaans by Quiellerie in 1996.

Also by Deon Meyer
Heart of the Hunter
Dead at Daybreak

He grimaced in the dark but he didnt realize it. His hands were shaking, hanging next to his body, his eyes were still closed.

Thats the problem, when you cant get out of your own head. You think youre so clean. Because Silva was so dirty. We think in terms of black and white. Silva was a killer, dirty and black as sin. And I was the clean, white light of justice. And they encouraged me. Get him. They made me even cleaner. Get Silva for the girls, the two women he had thrown away on a rubbish tip like so much human garbage. Get him for the cop of Murder and Robbery with the hole in the forehead. Get him for the drugs, for his invulnerability, for his dirty, black soul.

Joubert looked back and saw that he had made progress on the thin wire.

I
N THE AFTERNOON HUSH of the last day of the year, Mat Joubert thought about death. Mechanically his hands were busy cleaning his service pistol, the Z88. He sat in his sitting room, leaning forward in the armchair, the parts of the pistol lying on the coffee table in front of him among rags, brushes, and an oil can. A cigarette in the ashtray sent up a long, thin plume of smoke. Above him, at the window, a bee flew against the glass with monotonous regularity, in an irritating attempt to reach the summer afternoon outside, where a light southeaster was blowing.

Joubert didnt hear it. His mind wandered aimlessly through memories of the past weeks, among chronicles of death, his bread and butter. The white woman on her back on the kitchen floor, spatula in her right hand, omelet burnt on the stove, the blood an added splash of color in the pleasant room. In the living room, the boy, nineteen, in tears, 3,240 rand in the pocket of his leather jacket, saying, over and over, his mothers name.

The man among the flowers, an easier memory. Death with dignity. He recalled the detectives and the uniformed men on the open industrial site between the gray factory buildings. They stood in a circle, knee-deep in the wildflowers thrusting up yellow and white and orange heads. In the center of this judicial circle lay the body of a middle-aged man, small in stature. An empty bottle of meths was gripped in one hand, he was facedown, cheek against the soil.

But his eyes were closed. And his other hand clutched a few flowers, now faded.

It was the hands that Mat Joubert remembered most vividly.

On Macassar beach. Three people. The stench of burning rubber and charred flesh still hanging in the air, the group of the law and the media forming a barrier downwind against the horror of multiple necklace murders.

The hands. Claws. Reaching up to the heavens in a petrified plea for deliverance.

Mat Joubert was tired of living. But he didnt want to die like that.

What would it be like? If you pressed the dark mouth of the Z88 softly against your lips and you pulled the trigger, carefully, slowly, respectfully. Would you feel the lead projectile? Pain? Would thoughts still flash through the undamaged portions of the brain? Accuse you of cowardice just before the night enveloped you? Or did it all happen so quickly that the sound of the shot wouldnt even travel from gun to ear to brain?

He wondered. Had it been like that for Lara?

What was it like her light being switched off and watching the hand on the switch? What did she think about in that last fleeting moment? Life? Him? Perhaps she felt remorse and wanted to give a last mocking laugh?

He didnt want to think about it.

A new year would start the following day. There were people out there with resolutions and dreams and plans and enthusiasm and hope for this new era. And here he sat.

Tomorrow everything at work would be different. The new man, the political appointment. The others could talk about nothing else. Joubert didnt really care. He no longer wanted to know. Either about death, or life. It was simply one more thing to survive, to take account of, to squeeze the spirit out of life and lure the Great Predator even closer.

He banged the magazine into the stock with the flat of his left hand, as if violence would give his thoughts a new direction. He thrust the weapon into its leather sheath. The oil and the rags went back into the old shoebox. He dragged on the cigarette, blew the smoke in the direction of the window. Then he saw the bee, heard exhaustion diminishing the sound of the wings.

Joubert got up, pulled the lace curtain aside, and opened the window. The bee felt the warm breeze outside but still tried to find a way out through the wrong panel. Joubert turned, picked up an oily rag, and carefully swiped it past the window. The insect hovered briefly in front of the opening, then flew outside. Joubert closed the window and straightened the curtain.

He could also escape, he thought. If he wanted to.

Deliberately he let this perception fade as well. But it was enough to have him make an impulsive decision. Hed walk across to the neighborhood barbecue this evening. Just for a while. For the Old Year.

T
he first step in the rebirth of Mat Joubert was physical. Just after seven oclock that evening, he walked across the tree-lined street of the middle-class Monte Vista to the Stoffberg home. Jerry Stoffberg of Stoffberg & Mordt, Funeral Directors, in Bellville. Were in the same business, Mat, he liked saying. Only different branches.

Business is great, Mat. Profitable time of the year. Its as if many of them hang in there until just after the festive season, he said as he put the beer that Joubert had brought into the refrigerator. The undertaker wore an apron announcing that he was THE WORLDS WORST CHEF.

Joubert merely nodded, because hed heard it before, and uncapped the first Castle of the evening.

The kitchen was warm and cozy, a center of enthusiasm and laughter. Womens voices filled the room. Children and men traffic-patterned their way easily past female conversations and the ritual of preparations. Mat Joubert navigated his way outside.

His consciousness was internalized, his perceptions withdrawn like the retracted feelers of an insect. He was untouched by the warmth and the domesticity.

Outside, the children moved like shadows through pools of light and darkness, divided into squads according to age but united in their carefree exuberance.

On the porch teenagers sat in an uneasy, self-conscious no- mans-land between childhood and adulthood. Joubert noted them briefly because their clumsy attempts to appear at ease betrayed them. They had transgressed. He concentrated until he realized what they were trying to hide: the glasses on the porch table were filled with forbidden contents. Two, three years ago he wouldve smiled about it, recalled his own stormy adolescent years. But now he simply withdrew the feelers again.

He joined the circle of men around the fire. Each ones passport to the group was a glass in the hand. Everyone stared at the lamb that, naked and without dignity, was turning on Stoffbergs spit.

Jesus, Mat, but youre big, Wessels, the press photographer, said when Joubert came to stand next to him.

Didnt you know hes Murder and Robberys secret weapon? Myburgh, Bellvilles traffic chief, asked from across the fire. His luxuriant mustache bounced with each word.

Ya, hes their mobile roadblock, said Storridge, the businessman. They laughed respectfully.

Casual cracks and remarks were tossed back and forth across the sizzling lamb, all of it aware of and careful about Jouberts two-year-old loss brotherly, friendly, fruitless attempts to rouse his quiescent spirit.

The conversation took a quiet turn. Stoffberg turned the spit and injected the browning meat with a secret sauce, like a doctor with a patient. Sport, quasi-sexual jokes, communal work problems. Joubert shook a Winston out of a packet in his shirt pocket. He offered it around. A lighter flared.

Members of the circle at the fire came and went. Stoffberg turned the spit and checked the progress of the meat. Joubert accepted another beer, fetched another a while later. The womens kitchen activities had decreased. They had spilled over into the adjacent television room.

Outside, the conversation was geared to Stoffbergs lamb.

Ive got to eat before sunrise, Stoff. I have to open shop tomorrow.

No way. This liddle lamb will only be ready in February.

By that time itll be mutton dressed as lamb.

Jouberts eyes followed the conversation from face to face but he took no part. Quiet, thats how they knew him. Even before Laras death he hadnt been a great talker.

Trouble by Nadene Seiters
In Love With a Wicked Man by Liz Carlyle
Tunnel in the Sky by Robert A. Heinlein
Dead End Dating by Kimberly Raye
Quiet Meg by Sherry Lynn Ferguson
Taking Aim at the Sheriff by Delores Fossen
Mrs. Pargeter's Pound of Flesh by Simon Brett
Helen Keller in Love by Kristin Cashore
Tropical Depression by Laurence Shames
Valour and Vanity by Mary Robinette Kowal
Our partner