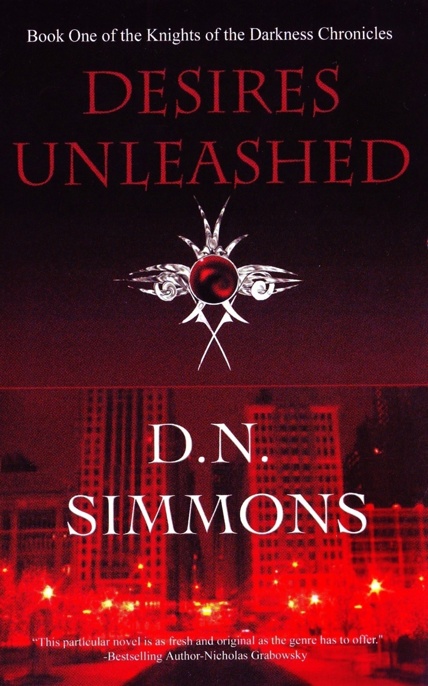 Book One in The Knights of Darkness Chronicles

D
etective Warren Davis shuffled through the messy stack of files on his desk. He was searching desperately for his drawer key. He had hidden a box of
Crunchy Cream
glazed donuts in his inside and wanted to indulge selfishly in the delicious sugary taste of, in his opinion,
“the best damn donuts to hit the 21st century.”
Finally after turning his desk into a disaster area he located the tiny metal key. He glanced inconspicuously over one shoulder then the other to make sure no one was watching. He knew how irresistible
Crunchy Creams
could be and he didn't want to share one morsel. He slowly turned the key and unlocked the drawer.

There they lay, the sweets of gods! Slowly Warren opened the box. Pulling one glazed donut from the container, he stuffed the donut, in its entirety, into his mouth, taking pleasure in the gigantic burst of sweetness that followed.
“Mmm, delicious,”
he thought to himself as he closed the drawer and settled back in his cushioned leather chair. He stretched his long legs out in front of him as he chewed the donut slowly, savoring every bite.

“What are you eating?” his partner, Detective Matthew Eric asked as he approached him. He stood beside Warren's relaxing figure, noting the huge bulges in the insides of his partner's cheeks. Matthew Eric stood six-feet-three, very muscular and extremely handsome. His physique reminded Warren of a light-weight wrestler. Matthew's skin was a perfect soft-golden shade which complemented his light-brown eyes hidden behind the mop of dark brown curls. Matthew's hand came up brushing his curls from his eyes as he studied Warren.

Warren remained silent as he swallowed, forcing one huge piece of donut down his throat then another. He was thankful for the time it gave him to think of a believable lie.

Matthew looked down at his partner, a smile spreading across his face as he watched Warren nearly choking to rid himself of the evidence. He waited patiently for the lie that would sure enough come spilling from those glaze covered lips. He thought Warren should know better than to open a box of
Crunchy Creams,
and think he wouldn't have to share.

“Oh,” Warren managed to say, swallowing the last of his donut. “This? It's nothing.” He followed up with a huge gulp of his decaffeinated coffee. Then he smiled innocently up at his partner. The expression on Matthew's face told Warren the jig was up and he had better share the wealth. “What?” Warren asked, shrugging his shoulders.

“If you don't cough it up, there's going to be repercussions,” Matthew threatened playfully.

“Are you sure?” Warren asked, smiling slyly. “Un-hmm,” Matthew nodded.

“Okay.” Warren began coughing and gagging playfully, attempting to bring up what he had swallowed.

Warren laughing, reached into his drawer and offered the box. “I was going to give you some anyway,” he stated.

“Yeah, sure you were,” Matthew teased jokingly as he all but snatched a donut from the box. He sat back in his chair and took a bite out of the donut. After a few minutes, he looked at Warren. “Remember when we first shared a box of these donuts?” he asked.

“Yeah,” Warren responded, remembering how Matthew had discovered his secret. The two men sat at their desk enjoying their tasty treats.

Twelve years ago, when Matthew was twenty-one, and fresh out of college, he had joined the Police Force. After Matthew had been on the force for seven years, already a seasoned detective, he was partnered up with Warren, who had been on the force for five years. They hit it off instantly and had been partners and friends ever since. They never dreamt they would become crime fighters against supernatural criminals. When the supernatural race (the politically correct phrase) was exposed, the government was forced to create a nationwide policing unit to monitor and arrest certain individuals with supernatural abilities who broke the law. So they began by recruiting a hundred-thousand of the nation's top cops and military personnel who were physically fit and mentally astute to begin the arduous training in paramilitary tactics, and weaponry specially designed to deal with those who possessed supernatural abilities. The training had been created to improve motor skills and heighten senses of sight, smell, and hearing, which was extremely necessary to combat and apprehend the unique criminal element in the supernatural world. Only five hundred out of the first hundred-thousand recruited made it through the demanding process, but more were needed. Then the call went out for more recruits which, in the end, gave the government an additional thousand officers needed to complete the fifteen hundred armed member force. There was another force of two thousand civilians assigned in certain fields, specializing in forensics, chemistry, character profiling, social behaviorists and weaponry. Because of their impeccable record of being among the best of the best on the police force, Warren and Matthew were drafted by the Superintendent of Police via the Mayor of Chicago for the recruitment. Mainly due to their unique partnership, and believing it would be very beneficial to the local Supernatural Unit Investigation Team, they were reassigned as partners to the Chicago division.

As Matthew took another bite of his donut, he remembered their Captain wanted to see the two of them in her office. Pronto. After he swallowed, he decided to inform his partner.

“Hey I forgot, the Captain wanted us in her office ASAP!” Matthew said calmly, as he munched on more of the donut.

“Oh really? Well I guess we better hurry!” Warren smiled as he reached in his drawer for a third donut. The two were still enjoying their sugary treats when Officer Brown walked by. He was a tall, good looking black man, clean shaven, well built, the health conscious/athletic type.

“Hey, the Captain is looking for you two. If I were you, I'd hustle in there, on the double,” Officer Brown said. He grimaced in disgust at the two men fattening themselves on the two-hundred calories per serving donuts. “Damn shame,” he said then walked away, leaving the two detectives to smile at each other before rising to head into their Captain's office.

They passed a few officers who were teasing them by making throat slitting motions. Everyone suspected the Captain was going to have another difficult case for the two detectives to work on. They were right.

“What took you two so long to get in here?” Captain Michelle Lawrence asked as she sat at her desk. The two detectives noticed that they didn't get a glimpse of her long shapely legs which were hidden behind the desk. Warren suspected that she had been gawked at by one too many officers and managed to hide her assets. Her long blonde hair fell in waves past her shoulders onto her shirt front, denying them and all others a peek of her 'famous cleavage' that the majority of the male-and some female cops, admired.

“Well, you know, Detective Eric, I didn't expect to be waiting this long when I called both of you in here about fifteen minutes ago,” she said, both eyebrows raised, a finger lightly tapping the desk.

“Sorry, Cap'n, but Warren here, he was in the little boy's room!” Detective Eric fibbed quickly. Warren tried hard to force back the chuckles threatening to erupt at any second. Captain Lawrence looked at the two men, and shook her head, restraining her own laughter.
'These two..
.,' she thought to herself.

“Look gentlemen, it's time to get right down to business. We have a report of a body found in the alley off 79th and Cottage Grove Avenue. The preliminary report stated the body appeared to be drained of blood and the head was...well...missing. Furthermore, there are no witnesses. I'm assigning this case to you. It's right up your alley. The Galen's on the scene. Detectives Weinstein and

Johnson are there right now, questioning the employee of a bakery store who discovered the body.” She handed Warren the address of the crime scene. “Now get the hell out of here.”

“Hey Cap'n, feel like cutting us some slack? We just got off doing the Joliet case.” Warren asked, as he glanced at the little white sheet of paper with the location of the crime scene on it.

“Oh geez, guys,” she shrugged, smiling, enjoying the moment. “I'd love to let you both sit back and eat your 'donuts' but you know this damn government...” She raised her eyebrows and shrugged her shoulders as if to ask, '
what can you do?'
“If only they'd put more than one division per state, I wouldn't have to spread your asses so thin, but being as it is, get out there, make me proud.”

“Get out,” Captain Lawrence said flatly, fighting the urge to laugh. The men gave each other a playful look and pouted like children as they headed for the door.

“Great, a body drained of blood and the head is missing. Let's just chuck this one up to a vampire and head on over to
Calvin's
for some ribs,” Warren suggested as he closed the office door behind them.

“Yeah, I know it's a pain in the ass, let's go,” Matthew said as they grabbed their coats and headed for the parking lot.

“I'll drive!” Warren said eagerly as he made a mad dash for the driver's side of Matthew's car.

“Like hell you will! You have a little too much of the speed demon in you. If you want to drag race, then do it in your own shit, not mine. Now saddle yourself into the spectator's seat,” Matthew said as he pushed his partner in the direction of the passenger side of his 2004 Python Triton. One of the new foreign cars from Asia that everyone was buying. It was an economy car, great on gas and looked like a sports car. Warren admired the car and mentally noted to put the automobile on his wish list for Christmas.

“You know,” Warren started as he looked around his partner's new car, “you should give this car to me as a Christmas present.” He smiled at his partner as he waited for an answer.

“Sure...if you give me your Diamondback SUV. You know that I love that truck.”

“Point taken, now let's drop the subject,” Warren said, smiling coyly. Matthew smiled broadly. He had gotten the last word, which was hard to do with Warren. He reached for his emergency light, placed it on the top of the car, clicking on the portable siren as they sped through the morning rush hour traffic on the urban streets of Chicago.

The location of the crime scene, an alley at 79th and Cottage Grove, was packed with onlookers. Uniformed officers struggled desperately to keep the crowd away from the crime scene. Cars were backed up for blocks as more and more police vehicles and media trucks pulled up. Matthew had to carefully navigate his car through the helter-skelter of unattended patrol cars, finally parking in a spot that wasn't too close to the other patrol cars. The two detectives emerged and made their way past the bevy of excited reporters and curious spectators. An ambitious reporter, desperate to get the “scoop”, cut in front of them as they tried to make their way to the crime scene. Before they could get one step further the reporter thrust a microphone in Warren's face and began to bombard him with questions.