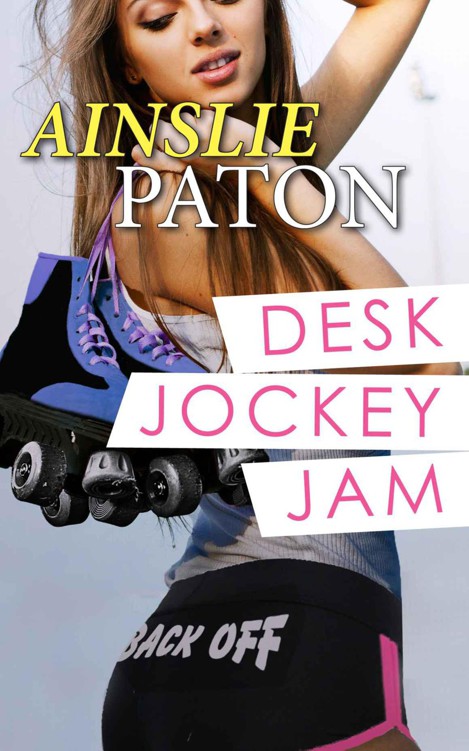 This story is a work of
fiction.  Names, characters, places and events are the product of the author’s
vivid imagination or are used fictitiously.  Any resemblance to actual events,
places, organisations or people, living or dead is purely co-incidental and
beyond the intent of the author and publisher. Copyright © 2013

Anthony
Gambese thought he had life sussed.  Happy family, good mates, the freedom of
surfing, a new career, and enough action in the bedroom to keep him well
satisfied.
He had no idea
.  But two chicks were about to show him the
error of his ways, trashing his love life, stealing his promotion and
challenging his honour.  And that was before he discovered what a roller derby
doll could do by skating over his heart.

Like
a roller derby jam, this novella is tight packed, fast and furious.

It
can be read alone or as a follow up to Grease Monkey Jive.  It tells the story
of Ant Gambese, the last of Dan’s mates not felled by a girl who was exactly
what he needed, and didn’t see coming.

The wave looked sweet and since
not too many grommets were angling for it, and Dan, Mitch and Fluke had taken an
earlier ride, this one was Ant’s.  He face-planted his board and spun it
towards the shore.  This was going to be choice.  All he had to do was wait for
it.  All he had to do was—

Ah
—stupid
little grommet cut in front of him.  “Fuck!”  He either pulled out or ran the
kid over.  Running him over was friggin’ appealing.  Teach him to cut in like
that, dangerous.  For a moment he and the kid eyeballed each other across the
swell.  He knew that grommet.  Little monkey.  Good surfer.  Good on a
skateboard too.  But if he kept pushing it like that all his skinny limbs might
not keep working right.

The kid owned the wave and
enough skill to flip Ant off as he stood.  “Fuck.”  Ant pulled up, let the wave
tunnel underneath his board.  If it wasn’t enough that bitch Bree Robinson had
to take the promotion he’d wanted.
No not wanted, deserved
, now a
twelve year old kid stole his wave, gave him the finger, and rendered him inarticulate.

This was not his day, not
his week.  He should’ve had his wits about him more.  Been on the lookout for the
kid, been on his friggin’ guard for Bree.  He’d known from the moment they were
hired together as trainee analysts a year ago that she was the one with gold
star stamped on her forehead.  She had the pedigree.  She had the smarts.  And
as the year progressed and eight trainees became seven analysts, then six, and
he’d watched her in action, he’d known she was his rival for the promotion.

But she was not a better
analyst than he was.

So how the fuck had she
managed to cut in on his wave?

He sat astride his board outside
the break point and rolled his stiff neck.  To make life more annoying, there
was the extended family lunch he had to show up at, no excuses this time.  If
he didn’t show there’d be all kinds of hell to pay from Mum, not to mention Nonna,
who was like an iPod stuck on repeat about it being time to find a good Italian
girl to settle down with.

As a joke one of the
dickhead cousins had shown Nonna how dating websites worked.  Now she was at
him to get a profile and send kisses.  What business does a seventy-five year old
have thinking about internet dating?
Christ
.

It was almost worth taking
Toni Pagano out to keep Nonna happy.  And man would it.  The Gambese and Pagano
families were as close as proper blood relations and it was no secret a match
between him and Toni would be viewed as better than a papal blessing.

He hadn’t seen Toni for years
now.  She’d been working in London.  Pulling beers or making beds, or something
minimum wage.  But she was back and she’d be at lunch.  He could barely
remember what she looked like without pigtails.  Still in an argument between
Toni and RSVP, maybe he could fudge something to keep everyone off his back.
Take her to a movie or a concert, keep everyone happy by letting them think
something was going on.

Another wave washed under
him and he watched the boys signal from the shore.  What he really needed was a
strategy to elbow Bree bitch Robinson so far out of his way she got eyestrain
looking for him.  That’s what he needed to be focused on, not Toni Pagano, not
electronic kisses, not making Mum and Nonna happy.  They’d be happy enough when
he was pulling in the big bucks and then maybe he’d think about a serious
girlfriend.  Till then it’s not like it was a drought and with the rest of the
boys paired up he was in the box seat for all the random action.

Jesus
.
Hard to believe he was the last man standing.  That’d snuck up on him too, like
the grommet, like Bree.  Him and Dan and Mitch and Fluke had been mates since
high-school.  Dan, Mitch and Fluke went back to short pants days.  But last
year while Ant had his head down, trying to make sure he came out on top at
work, everything changed.  And ironically he’d been the one to kick start it.

He never thought the boys
would see that bet to learn how to waltz and whatever through.  Never.  Not
once had he truly considered it was a financial risk, that he’d do his dough on
it.

He did his dough.  And
while he was busy thinking about public listings and share splits the dynamic
of their whole friendship changed.  The boys were thinking about privacy and
splitting rent.

No big surprise about
Mitch, serial steady when he could pull it off, and he was king-tide high about
being back with Belinda, but Dan.
Man!
Dan was the ultimate player
with a different chick every weekend.  Ant didn’t think Dan had it in him to be
faithful.  But since he’d met Alex it was game over for Dan.  If Teach ever
dumped him, he’d be roadkill, permanently.  He was in a bad enough way when
he’d called it off with her because of his fuckwit father.  Now Alex had moved
in with him and they were rock solid.

Ant thought about that as
he lined himself for a wave to the shore.  Jesus, maybe he was an a grandpa
like the grommet said.  Too old for random hook ups and disposable one-
night-stand relationships.

And that brought him to
Fluke.  The ranga had a steady girlfriend.  It’d been a dry argument for Fluke
since forever.  Ant would’ve eaten a tub of
Sex Wax
before he’d have bet
on Fluke getting it on and keeping it up with the cutie pie in the cardy.  But
now even Fluke had a shot at something worth keeping with Carlie.

Which meant they could
happen at work, so Bree Robinson better keep her wits about her, because Papal
blessings ran as rich as pasta sauce in the Gambese family, so a fair dinkum
miracle wasn’t out of the expectation set.

Meanwhile he needed
coffee.  He paddled hard, snuck a look behind and then was on his feet, crystal
blue streaming under him, foam starting to froth as the wave topped out.  No
more grommet, no more Bree bitch Robinson, just the wave and the salt air and
the white sands and the thought of breakfast making his mouth water.
Everything was right with the world again.  And even better once he was sitting
in the cafe with a Bondi Breakfast –extra bacon, in front of him and his first
macchiato for the morning.

Until Mitch opened his fat
trap.

“What the stuff is wrong
with you, Ant?”

Dan leaned forward.
“Don’t tell me the Alfa is buggered.  I hate working on that prissy little car.”

Ant grunted, “There’s
nothing wrong with me, and my baby girl is purring.”

“You nearly whacked that
kid who dropped in on you,” said Fluke.

“How could you possibly
know that?”

“I think the whole beach
knew it, Ant,” said Dan, looking at him with his best ‘what gives, you’ll feel
better if you tell me’ expression.

“Ah, shit.  Who got it?”  Dan
knew how much this hurt.  He did the easy eye contact thing with their waitress
and a second round of coffees was on its way.

“You mean that deserving
colleague you admire and respect so much?” said Fluke.

“I mean that bitch Bree
Robinson.”

Ant gave Mitch the evil
eye.  “Fuck off.  That senior analyst role was mine.”

“Hold up,” said Dan.  “You
said she was good.  Knows her stuff.”  He pushed back in his chair, settling
in.  Which wasn’t good.  It meant question time.  “Why do think they chose
Bree?”

Dan nearly choked on a
toast crust.  “And by that you mean?”

“Probably what you’re
thinking.”  He wanted Dan to start thinking about something else, anything
would do.  Couldn’t the guy just eat his eggs.

“I’m thinking you’ve
always said Petersens was a respected brokerage full of smart people.  I’m
thinking those smart people chose Bree over you for a good reason.  Is that
what you thought I was thinking?”

“I was thinking she
probably has good tits,” said Mitch.

“No wait, answer Mitch
first.  Do you think she got promoted because she’s got good tits?”

“No.”  The right answer,
but not a satisfactory one for Dan.

“She doesn’t wear low cut
tops and tiny skirts and flaunt her body?”

“No.  She wears tailored suits
and puts her hair in a thing,” he gestured at his head to indicate Bree put her
hair up there, all sleek and tidy.  “It’s a brokerage, Dan.  We don’t wear
bloody overalls and tool belts either.”

“Right, so what did you
mean by saying she’s a suck up?”

“If you want us to think
she slept her way to the corner office,” said Fluke.

“So does she have good
tits?” asked Mitch.

Ant rubbed his eyes.
“There are no corner offices, its open plan, except for old man Petersen and
I’ve never looked at her tits.”

“For real?”  They all
looked at Mitch.  He laughed.  “You’ve looked at her tits.”  He forked a roast
tomato in his mouth and swallowed.  “You’d be dead if you didn’t.”

“Fuck off, Mitch,” said
Ant.  “She’s a colleague, not some chick I want to take home from our friendly
neighbourhood dive after five minutes of having her tongue down my throat.”
And so what if he’d looked at Bree’s tits, he would be dead if he hadn’t, but
it didn’t work like that in the office.  It was work, not the weekend.  Not
that there was much of Bree on display anyway.  She was so conservative, pants
or dark stockings, knee length skirts, long sleeved jackets all in dark
colours.  The only thing not strictly corporate about Bree was her shoes.  She
was tiny, she wore these come-fuck-me-shoes with six inch heels.  She had a red
pair he liked.