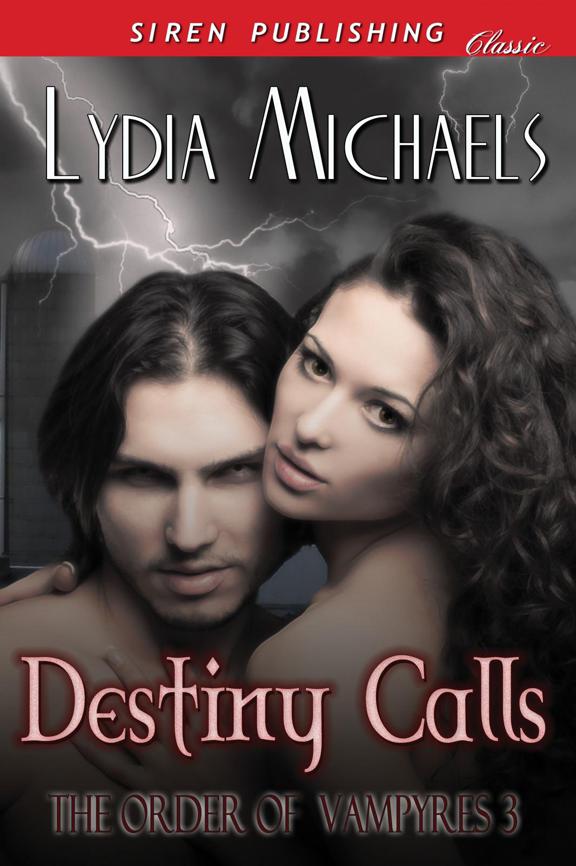 After making the ultimate sacrifice in order to save his perfect brother and mate, Cain Hartzler’s patience with Destiny has grown thin. Resigned to an eternity spent alone, Cain decides it’s time to choose his own Destiny once and for all. But every choice he makes holds a greater consequence than the last.

There is only so much an immortal heart can take, and once Destiny Santos grabs hold of Cain’s, he is changed forever. Cain’s ever-confident bad-boy reputation is shaken to the core by this mere mortal, and he will do anything to have her, but another female has set her heart on Cain, and he must make an impossible choice once again.

A storm unlike any other is coming, The Order is changing, and passion will burn hotter than ever before when Cain Hartzler is finally pushed too far. There is no escaping Destiny when she calls!

If you have purchased this copy of
Destiny Calls
by Lydia Michaels from BookStrand.com or its official distributors, thank you. Also, thank you for not sharing your copy of this book.

This is Lydia Michaels’s livelihood. It’s fair and simple. Please respect Ms. Michaels’s right to earn a living from her work.

This book is dedicated to the unique and extraordinarily beautiful Ivone Santos.

Don’t settle. He’s out there.

Destiny will make sure he finds you.

Cain scented a female. Soft and feminine, his nostrils flared as her fragrance mixed with the crisp, cool scent of freshly fallen snow that filled his lungs. Fallen leaves formed a foundation under the blanket of white, yet russet-colored pine needles made up pools of exposed earth under the canopy of evergreens.

It had been a cold winter with days devoid of blue skies and sunshine. Perhaps the bone-bleached opaqueness of the heavens sensed the bleakness of the world below. Twenty women had been brutally murdered in these woods, and Cain was growing more and more frustrated by the minute because he was no closer to finding the monster, the slaughterer, he sought. The thrum of the wilderness surrounded him, the beat of outside life trespassing among many natural habitats. The female was mortal.

For months he had been following the English news. He returned to The Order to tell the council what he suspected only to have his concerns pushed away like childish ramblings interrupting adult business. Sure he was young compared to the rest of his kind. At thirty-eight years he was a baby, but he was also more aware of the world outside their life on the farm than most.

So much had changed in the past year. The constraints of Amish living became all too suffocating. Like a noose around his neck, the repressive traditions were tightening with every twist and turn. Many simply fell limp and allowed the elders to dictate to them, but Cain needed to break away. He still was unsure if he would ever go back for more than just a visit with his family. He never truly fit in there, and the more exposure he had to the English world, the more he changed.

A sort of canned melody broke the quiet of the woods. Cain’s head snapped up and turned sharply to the left where the noise was coming from. She was close. His strong legs bunched with muscle, tightening like a spring, snapping and propelling him upward some twenty feet. He leapt into the trees and scanned his surroundings.

Spindly branches of deep green and black made up too thick of a shelter over the forest floor, so he dropped back to the ground, landing with agility into a crouch low on the snowy floor.

“
Filho da puta.
” The distant whisper traveled over the breeze to his ears. He didn’t understand the words, but they were spoken by a female. He began to move quickly, tracking the artificial sound of a woman singing about possibly having it all and then rolling in something deep. He still didn’t quite understand English music, and magically it seemed to come out of tiny little hidden devices loud enough to fill a room.

The music stopped, and he stilled.

“Hello?” the female voice said. The muffled chatter of a male came from the phone. The male voice, too, had a canned sort of echo. It was too muffled for him to make out the words.

“Hi, Vito. How are you?” the female said, and Cain began to quietly navigate his way through the trees to find the host of the voice.

Cain’s chest worked as he drew in her scent and moved farther up the mountain. Although it was winter, his body heated from the excitement of the hunt. His heavy leather boots, laced over his brindle and gray canvas pants, pressed deep prints into the snow. His breath puffed clouds of warm moisture before him, and his heated flesh created its own climate.

His exposed, muscle-laden arms glistened with a sheen of dewy perspiration. Cain had recently discovered many new gifts he possessed. Being something other than warm blooded or cold blooded was one of them. He couldn’t remember the last time the temperature affected him.

“
Merda
,”
the female cursed under her breath then cleared her throat. Cain was getting closer. “I, uh, needed to borrow something.” More muffled talking from the canned male voice. “Look, don’t get mad, but I needed it.” The female’s voice sounded unsure. “Uh, I sort of can’t.”

He drew in on her. “Why not?” the male voice snarled, and Cain tried to piece together the conversation. He gathered that the female was speaking on a cellular phone. Whoever the male was, perhaps he would come collect his female before some
feeish
rogue came and slaughtered her. Stupid English broad.

“I sort of lost my ride, and I can’t get back right away,” she mumbled.

“Back? Where the hell are you?” The male’s displeasure was evident in the pitch of his gruff voice.

“God damn it, Destiny! And what the fuck…” As the male continued to shout at the female, Cain tracked her smell until he had her in his sights. His stomach knotted the moment he set eyes on her. Of all the imbeciles who would be dumb enough to venture into these woods with a killer on the loose, he should have known that eventually this particularly annoying female would be one of them.

Destiny Santos was a female he was quite familiar with. Her persistent reporting for a local English news channel had more than exploited the fact that there was a rabid animal on the loose in the woods. Unfortunately the general public didn’t understand that this was not the typical wild beast they were dealing with, and if Cain could get hold of this dark-haired little piece of fluff long enough to wipe her mind, they never would. The last thing his people needed to deal with was the unstable outside world learning of their existence.

Storm Front (Twilight of the Gods Book 1) by Christopher Nuttall
Stranger At The Wedding by Barbara Hambly
Mr Majestyk (1974) by Leonard, Elmore
The Hunger by Susan Squires
The Mystery of the Masked Rider by Carolyn Keene
A Neverending Affair by Kopen Hagen
Cool Repentance by Antonia Fraser
The Girl on the Via Flaminia by Hayes Alfred
Phoenix Café by Gwyneth Jones
Rockstar by Lexi Adair
Our partner