What would you do if you only had twenty four hours to save the life of a friend?

Searching for lost souls and solving problems was never Nick Travers’s intention when he started doing favors for his buddies. A former football player who sometimes teaches blues history at Tulane, Nick would rather just watch the Louisiana rain and listen to old Muddy Waters records.

But when music mogul Teddy Paris, a former team-mate from the New Orleans Saints, visits Nick and asks him to help find $700,000 taken from a rap prodigy, Nick can’t turn down his friend. The missing money will pay a bounty on Paris’s head that was set by a cross-town rival, a street-hard thug named Cash.

Nick soon finds himself lost in the world of Gucci-lined Bentleys and endless bottles of Cristal champagne. He sets out with fifteen-year-old rap star, ALIAS, seeking a team of grifters that conned the kid. But uncertainty, the constant threat of violence, and a phantom grave robber haunt their search. When a killer hits too close, Nick takes ALIAS with him to the Mississippi Delta, where he comes under the protection and guidance of Nick’s mentor, blues legend JoJo Jackson, and his wife, Loretta.

Soon Nick, JoJo, and another old-school Delta tough guy do battle in the Dirty South rap world where money, sex, and murder threaten to take down Paris’s empire and destroy ALIAS. As cultures clash, the story winds its way through the infamous Calliope housing projects, the newly built mansions of New Orleans’s lake-front, and ultimately to the brackish muck of the Bayou Savage.

Dirty South
is a thrilling tale of friendship, betrayal, revenge, and trust from a fresh and hip new voice. Take a ride to the other side of New Orleans, away from the neon gloss of Bourbon Street, to see what the dirty south is all about. 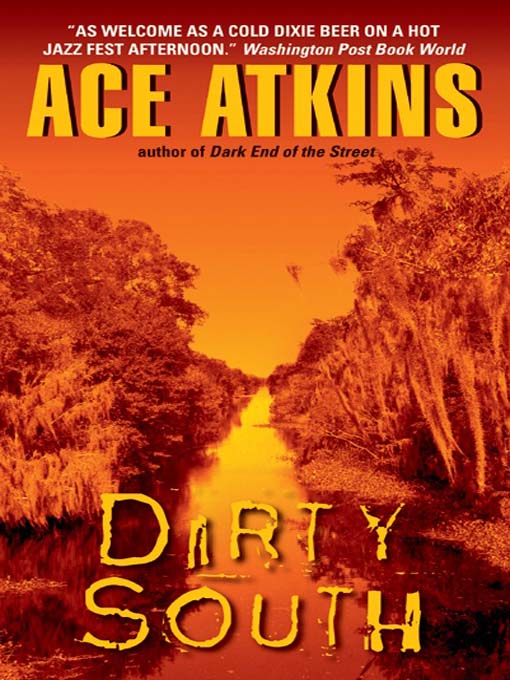 For my mom and sister,
“Ain’t nothin’ like family.”

I ride DL into the CL,
gun right in my grip.
I slip a clip in every rip,
cause hatas likely to trip.

I SPED ALONG HIGHWAY 61, darting from one small town in the Mississippi Delta to the next with nothing but my old army duffel bag and CDs of blues singers I spent my life researching. Two weeks on the road from New Orleans and still nothing to show for it. I drove back to Clarksdale on a spring afternoon where heat broke in gassy waves from the pavement to find my old buddy JoJo. He was waiting for me when I arrived, a sack lunch filled with cold fried chicken sandwiches and potato salad. Loretta waved to us from the porch of their old farmhouse. Large and brown, she squinted into the white-hot sun, knowing I had to get back to New Orleans by Friday and that only JoJo could help me.

“This man doesn’t like white people,” JoJo said, unwrapping our sandwiches and rolling down the side window to my 1970 Bronco. He was a black man in his late sixties, white hair, short mustache. Wisdom around the eyes.

“You think bringin’ along a black man will help?”

“You think ’cause he know me from the day might help, too.”

“There is a possibility of that,” I said.

“He was a good guitar player,” JoJo said. “Sonny Boy liked him. Sonny Boy said he made him sound real fine.”

“How long has he been in Marks?”

“Carve the faces of dead people.”

We rolled along Highway 6 talking about old times at the bar JoJo used to own in New Orleans. It was a beautiful little place before it burned. A little cove on Conti Street with brick walls and a long mahogany bar dented and scarred from elbows and cold Dixie bottles. Loretta sang there every Friday and Saturday. During the week, she cooked. She made soul jambalaya and a mean batch of gumbo. JoJo and Loretta took care of me then. They were still my family.

We passed over a small metal bridge running over a creek and by a junkyard filled with hundreds of rusting cars. The creek had flooded into the ditch where the cars sat in stagnant water, reaching over their hoods and suffocating them in the green muck.

We talked about Robert Johnson and Lee Marvin. Bessie Smith and Earl Long.

JoJo told me about his corn crop coming up and a new John Deere tractor he bought and how he did not miss the bar he’d run for as long as I’d been alive.

We rolled into Marks at sundown. A broken-down collection of gas stations and abandoned buildings stood around an old church and a graveyard. I had to slow down to miss a couple of wandering dogs, skinny and coated in mange. I put on some Robert Johnson and I told JoJo about Johnson coming to a juke joint in Marks in the thirties. He played guitar for Son House and Willie Brown with his new skills he’d acquired from a man named Ike Zinnerman in Hazlehurst. Son House said Johnson had sold his soul to the devil to get those skills.

We found an old black man on his porch, eating purple-hulled peas and cornbread and listening to Z. Z. Hill. JoJo got out of the truck with me and we asked him about where we could find a man who called himself Tip-Top. JoJo said his real name was Bob and that he liked to carve dead people.

The man pointed down the hill where some dogs gathered to eat a rooster that had been killed. At the end of the road, the sun was a dropping orange orb that looked as if, if you kept following the road for a mile, you could touch it. Walk into its big burning fire.

“How’s Maggie?” JoJo asked as we headed up the hill.

“This one gonna last?”

I parked on a gravel road and walked with a couple dogs trailing me. JoJo walked by my side whistling a little Muddy Waters song. The porch had been screened in, the front door hanging loose by its hinges. Wood shavings littered the buckled floor. Two pinewood coffins. New and fresh smelling. The sound of a television inside. Canned TV laughter.

“Always liked that woman who ran the cruise,” JoJo said.

“She liked the cocaine,” I said.

The door opened after a knock. An old black man strapping himself into a pair of overalls eyed us. He fixed up the strap on his shoulder. His left eye twitched. “You the man lookin’ for me?”

“This man don’t want to do you no harm,” JoJo said. “Wants to know about you and Sonny Boy.”

“I know.” JoJo walked off the porch and began to play fetch with a few of the dogs. I asked the man if he would mind sitting on the porch and letting me record him for a project I was working on about Sonny Boy. I told him I was a professor at Tulane University and was working with the University of Mississippi about the great harp player.

“Sonny Boy was a motherfucker who stole my whiskey and my women and once took a piss in my boot. I spent half my life tryin’ to forget about the Goat. Now you leave me be. Got work to do.”

He slammed his door and I heard the canned laughter of
Love Boat
.

JoJo kept playing with the dogs. He kept his eyes on one in particular, rubbing the dog’s head. She was of questionable breeding, somewhere a German shepherd in the mix, with long drooping ears and a curved tail.

JoJo walked back to the truck and grabbed some chicken from the sandwich he hadn’t finished. He fed the dog. “I don’t like people who don’t take care of their dogs. Show they’re evil. I know you tryin’ to find this man ’cause he got some stories about Sonny Boy. But he evil if he let a fine dog like this get all skin and bones.”

I heard a screen door slam behind the old shotgun house. I followed a dusty trail behind it and saw Tip-Top working a planer on top of a casket. A life-size dummy — some kind of stuffed black suit with a face made out of wood — watched from a lounge chair nearby.

I walked over to Tip-Top, moving my hand to the back of the dummy’s head. I wanted to do Señor Wences or even the Parkay margarine ad. “Friend of Charlie McCarthy?”

“Listen, man,” I said. “Give me twenty minutes. Heard you were with Sonny Boy at his last gig in Tutwiler. Something happened with a bottle of gin.”

“Will you tell me about it?”

“Why do you want to know these things?”

“I write about the blues.”

“JoJo brought some whiskey,” I said.

Thirty minutes later, he was drunk, had told the story, and JoJo had bought the dog from him for five dollars. JoJo liked to joke but didn’t joke with Tip-Top. When he was through making the deal, he found some rope to put around the dog’s neck and waited for me by the old truck that my friends called the Gray Ghost.

“We was in this church,” Tip-Top said. “Down where he buried now. And it was still a church then. And he sat in there all night askin’ God to let him die. He walked outside in this thunderstorm. I was too drunk to move and he kept cursin’ God.”

I wrote down some notes. Asked a few more questions. It was the story I needed to finish the piece.

“They pay you for doin’ this?”

JoJo loaded up the new dog in the truck and she curled into a seat behind us, yawning. “We need to get her some water down the road.”

“What you gonna call her?” I asked.

“There are a few trees,” JoJo said, watching the yellow lines of the blacktop heading back to Clarksdale. “Can’t you stay till Monday?”

We passed through a couple of small towns and stopped at a Texaco station for Annie’s water. We decided on Annie because of the old song “Work with Me, Annie.” But I told JoJo it was more like the song “Polk Salad Annie.” This dog was straight Delta mutt, could probably eat a cottonmouth and make the alligators seem tame.

When we reached the crossroads at 49 and 61, I looked over at the big metal sculpture someone had erected to the history of the blues. Metal guitars and road signs. I knew there wasn’t any real crossroads and it was a nice gimmick to bring folks in. But it made me think about something Tip-Top had said.

JoJo thought about that as we headed down 49 and passed by the old Hopson plantation where JoJo had worked as a child. The old commissary was now some kind of bar. The sharecroppers’ shacks motel rooms to give tourists a feel for the old days.

The sun was gone. It was night. Only the headlights of the truck and Annie’s panting to keep us company.

“About the best I can say is it’s different,” he said. “Ain’t the same. Doesn’t mean the same.”

I saw his old profile in the dim light as we rounded onto the footbridge and country road to take us home.

SIRENS AIN’T NOTHIN’
but ghosts. They reach out every damn night, red and blue, white spotlight flashin’ ’cross your eyes as you sleep on that concrete floor patterned in blood and dirt. You covered in a torn yellow blanket that once hid your dead mamma for weeks. In its touch, you see a bit of her cold ear and the edge of that face you tried not to imagine while you kept goin’ to school, cuttin’ her las’ ten dollars in a hundred ways at Rob’s Party Store down on Claiborne. You remember? Don’t you?