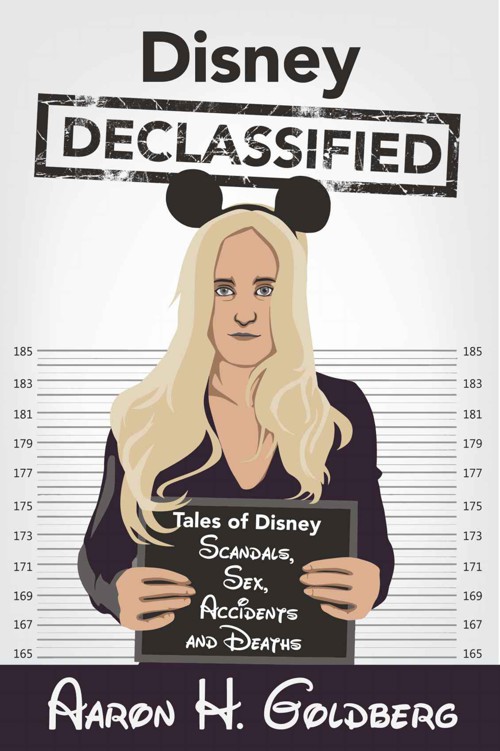 No part of this book may be used or reproduced in any matter whatsoever without written permission except in the case of brief quotations embodied in critical articles and journals.

This book makes reference to various copyrights and trademarks of The Walt Disney Company; this book is in no way authorized by, endorsed by or affiliated with Disney or their subsidiaries.

The mention of names and places associated with Disney and their businesses are not intended in any way to infringe on any existing or registered trademarks but are used in context for educational purposes.

While every precaution has been taken in the preparation of this book, neither the author nor publisher assumes responsibility for errors or omissions.

Dedicated to my late mother, Susan.

Thank you to Walt Disney for his creations and to you,

the reader, for buying this book!

Making A Mint Off The Mouse

Pirates of The Court Room

It’s an Accessible World After All

Morality In The Movies

The word Disney means different things to different people. For most, The Walt Disney Company stands for all things wholesome, family centric, moral and entertaining. For others, the cynics and the haters, they feel the company sustains and promotes unrealistic images and storylines to children. Their view is the company isn’t “healthy” for children, but rather a self-perpetuating global consumerism machine only interested in profits—your Uncle Walt doesn’t love you, just your money.

As for Walt Disney, the man, he too still garners much attention nearly fifty years after his passing. There are millions of people who still love him. Not only did he change our childhoods with movies, television and how we vacation with our family, but also his fingerprints are all over American culture.

For the millions who still embrace Walt, his voice is like music to their ears. The grainy black and white and early color television footage of him is almost magical. He still looms larger than life as he stands watch over his vast entertainment empire. This is due to the prolific Disney marketing machine. This machine keeps Walt both relevant and in the hearts of millions of children—so much so, that in one survey, many children didn’t know Walt Disney was a real person, but thought he was a character created along the lines of the Pillsbury Doughboy.

Since Walt’s death, there is another public persona of his that has grown and evolved into mythical proportions as well. Walt has been called everything from a bigot, racist, chauvinist, anti-Semite—even his own grandniece lobbed this matzo ball out into the public eye in 2014—and a micromanaging, ass of a boss.

Clearly, The Walt Disney Company and Walt Disney, the man, can be very polarizing topics. Disney and their theme parks, television shows, movies, and the man, have been analyzed six ways to Sunday; even yours truly is guilty from time to time. This book really isn’t about the analysis or judgment (although there is a smattering of social commentary here and there) of the Disney Company at a deeper, or philosophical level—it’s actually quite the contrary.

Disney Declassified at its core is an interesting collection of real life stories with Disney being the setting or catalyst in a situation that is usually very un-Disney-like. Some of the situations are heartbreaking, others are head scratching, and probably all of them are tales the company would rather you not hear.

Wherever your point of views may lie, Disney lover or hater, this book will be interesting to you. It isn’t an attempt to sully the company’s name but to give you the glimpses of reality that does seep into one of the most prolific, entertaining and omnipresent companies in American culture and history.

In 1998, the United Kingdom’s maximum security prison, Whitemoor, home to murderers, sex offenders and IRA terrorists, paid their inmates five pounds a week to assemble and package Disney’s
The Lion King
lamps
that went on sale in the country.

Sounds like fun, right? Surely everyone has captured the excitement of Disney at some point on his or her trip to visit Mickey. The stories in this chapter are of people showing a different Disney side, a side that is, well, a bit crazy. I’m pretty sure when Disney rolled out their campaign, this wasn’t the Disney side they were talking about and imploring people to embrace. These are the stories that may make you want to scream—not in joy and excitement but in horror and disbelief.

Oftentimes, Disney is the catalyst or setting for people to do crazy, irrational things. This is what Mickey Mania is all about; going crazy with, for, and about Mickey. Fortunately or unfortunately, depending on your views and sense of humor, there are an enormous number of stories that are noteworthy enough to be included in this chapter. While all of them can’t be covered, a considerable number of them can be, and are classified for our purposes into several sections.

Plain Crazy; here the subtitle speaks for itself, generalized batty behavior and antics. Next is Theft and Fraud; pretty self-explanatory. Followed by Dying for Disney, stories about faking cancer to get a trip to Disney. Dubious Disney; these are some questionable moves the Disney company has made over the years. Lastly, a couple of good, heartwarming stories that show Disney does bring out the good in people, after all.

Plane Crazy
was Walt Disney’s first animated short featuring Mickey Mouse in 1928. The six-minute cartoon helped countless people around the world fall in love with Mickey Mouse. However, no one loved him more than Walt himself; he loved him like a family member. Over eighty years later, the words
Plane Craz
y
still resonate with some Disney family members. In their case, you’ll have to add an “i” and drop the “e” in the word
Plane
, to fully describe their situation.

It’s only fair that stories featuring erratic behavior with an element of Disney start with a story involving some Disney drama in its purest form. Real Disney drama with real Disney family members; no, not Donald or Goofy, but Walt’s former son-in-law and Walt’s grandchildren.

Economic Research Associates (ERA) was the firm that Walt utilized to research the best location for Disneyland. In the early 1960s, Walt utilized the firm once again for selecting a site for his Florida project. In 1963, William “Bill” Lund worked for ERA and traveled to Florida to research the best locale for Disney’s East Coast enterprise. We all know the story. Bill was obviously successful, as the land was selected, deals were made and Walt Disney World came to fruition in October of 1971.

Helping to select a site for Walt Disney World wasn’t the end of Bill’s relationship with Disney. His relationship actually got more intimate. In 1968, Bill married Walt’s daughter, Sharon. In 1970, Sharon gave birth to their twins, Bradley and Michelle. By 1977, their marriage soured and Sharon and Bill divorced. Despite their marital strife, before her passing in 1993, Sharon appointed Bill as one of four trustees to their children’s trusts, which today is worth roughly $400 million.

The trusts would pay both Brad and Michelle yearly installments of roughly $1 million a year. At certain age milestones, lump sums ranging from $20 million to $35 million would also be disbursed. One of the Bill's duties as a co-trustee was to determine if his children were competent enough to receive the money. This is when the family financial feud started, when an accident happened to Michelle.

On Labor Day of 2009, Michelle was out with some friends when she suffered a brain aneurysm and was rushed to the hospital for emergency brain surgery. During her recovery and a lengthy hospital stay, physicians told the family her prognosis was grave. This is where things started to unravel not only for Michelle physically, but for all parties financially and emotionally.

When Michelle was seriously ill and hospitalized, Bill wanted to have her transferred out of Southern California and to a rehab closer to him in Arizona. Certain family members and those closest to Michelle disagreed with Bill’s intentions. They implored him not to do this, as leaving California for Arizona would be the last thing Michelle would want. A line was drawn in the sand, so to speak, and the two sides squared off over her care.

To make it easier here, as there are a lot of first names to throw around in the story, let’s break this into teams. Team Michelle was composed of close friends, some family, and a co-trustee. Team Bill includes himself, his wife Sherry, some of her children, and Michelle’s twin brother Brad.

Team Michelle felt Team Bill was trying to keep them away from Michelle, restricting access to her, and causing stress and drama in an effort to keep her isolated from everyone else. Team Bill complained of the same thing. It basically became a “he said, she said” of each team blaming the other in an effort to control Michelle. Each side complained the control over Michelle was an effort to isolate her and have access to her money and have absolute control over her.

Soon after, Michelle started to make a recovery and regained consciousness, albeit with some short-term memory issues. She was, however, lucid enough to understand not only her health situation but also the pressing situation with her father.

Michelle gave statements and agreed with everything Team Michelle was doing. She also agreed that perhaps some of Team Bill’s actions were malicious and too controlling. Additionally, her biggest fear was to end up in Arizona with Bill controlling her and calling all the shots in regards to her healthcare and finances. Michelle even noted that before her aneurysm, she decided she wanted to rescind her father’s power of attorney. The actions of Team Michelle were appropriate and appreciated.

Well, the plot continued to thicken while Michelle was incapacitated. When her attorneys were working to attain the temporary power of attorney, they uncovered improprieties in some of her trust finances and Bill’s name was allegedly all over them.

Apparently, Bill was receiving money from secret land deals he put together for several years utilizing the funds of the trust—something obviously immoral and, more importantly, against California law. As per the law, trustees can’t benefit personally from transactions involving a trust. Court records showed Bill made in excess of $3.5 million on the land deals he orchestrated with the trust's funds.