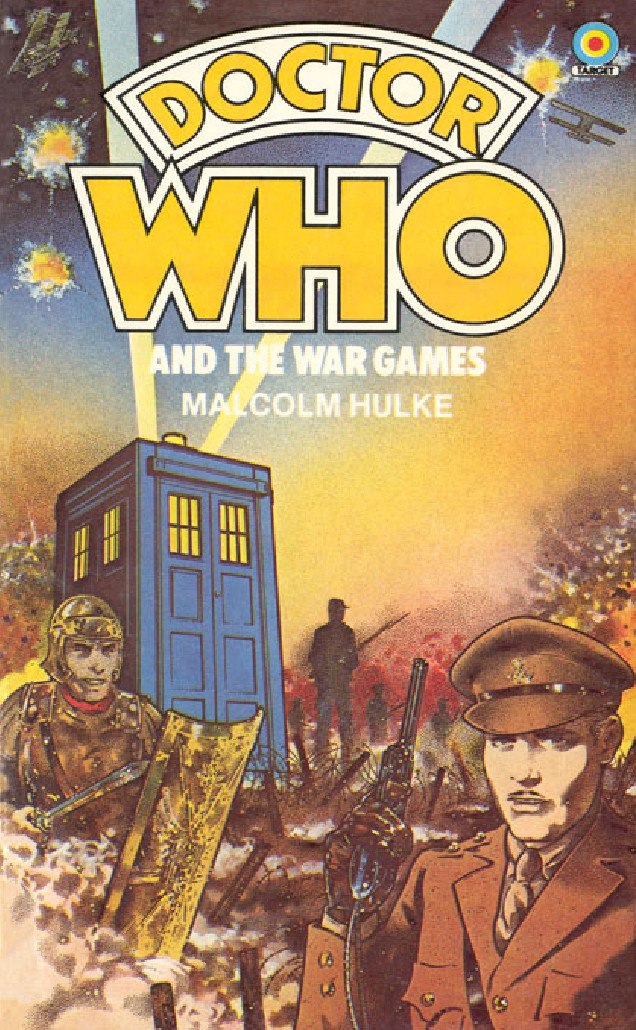 The year was 1917 and the TARDIS had
materialised on the Western Front during
the First World War.

Or had it? For very soon the Doctor found
himself pursued by the soldiers of

Ancient Rome; and then he and his

companions were reliving the American
Civil War of 1863. And was this really
Earth, or just a mock-up created by the
War Lords?

As Doctor Who solves the mystery, he
has to admit he is faced with an evil of
such magnitude that he cannot combat it
on his own—he has to call for the help of
his own people, the Time Lords.

So, for the first time, it is revealed who is
Doctor Who—a maverick Time Lord

who ‘borrowed’ the TARDIS without

permission. By appealing to the Time
Lords he gives away his position in Time
and Space. Thus comes about the Trial
of Doctor Who . . .

by the Paperback Division of W.H. Allen & Co. Ltd A Howard & WyndhamCompany

4 Back to the Château

8 Battle for the Château

10 Fall of the War Chief

11 Trial of Doctor Who

‘It is our destiny to rule. We have the superior intelligence, energy and determination to bring a New Order to all galaxies within the Universe. For this glorious crusade we shall need an army of ferocious fighting men. These soldiers we shall recruit from the most war-like planet known to us—Earth. And, having made our recruitment in large numbers, we shall ruthlessly discard all those of inferior quality. This process of elimination, in which all those who fail shall die, will be called the War Games.’

‘What a sad, terrible place.’

Jamie, his kilt ruffled by a light breeze, surveyed a landscape of undulating mud. The utter desolation was broken only by occasional stubs of trees, dead and lifeless.

He sniffed at the breeze.

‘And what’s that awful smell?’

Behind him stood the TARDIS, the Doctor’s Time and Space machine which from the outside looked exactly like an old-fashioned blue police box. After their last adventure the Doctor had promised to try and return Jamie to his own homeland and time—Scotland in 1745, where Jamie had been fighting English redcoats in the Second Jacobite Rebellion before he had met the Doctor.

Jamie turned to the Doctor. ‘This looks nothing like my country. Are we even on Earth?’

The Doctor was locking the door of the TARDIS. ‘I think so, Jamie. The question is, when?’

Zoe, the Doctor’s other companion and an astrophysicist from a time in the distant future, had already walked some distance from the TARDIS to explore their surroundings. She called from a rise in the ground,

‘Doctor! There’s something down here.’ She went down the other side, out of sight.

The Doctor and Jamie followed her, squelching through the mud. They found Zoe staring at a tangle of rusted wire.

‘It’s not much but it’s
something
,’ she said. ‘It’s the only sign of life so far. What are the little spikes for?’ At regular intervals twisted barbs stuck out from the tangled wire.

Invented by an American to pen in cattle on the range, then used against human beings.’

‘What’s that?’ Jamie pointed to an oval-shaped domed object, half submerged in the mud.

‘A steel helmet,’ said the Doctor. ‘I think we have arrived in one of the most terrible times in the history of Earth—’

A distant rumble of heavy artillery gunfire drifted to them on the breeze. It was followed by a loud, high-pitched whine from the sky.

‘Get down!’ Using both hands, the Doctor pushed Zoe and Jamie into a crater, throwing himself on top of them.

But her words were drowned by an ear-shattering explosion less than twenty metres away. A second shell screamed down and whacked into the soft ground, sending up a spurt of flame and smoke. It was followed by a third.

Then silence. The air was filled with the acrid stench of high explosives.

‘You said we’ve landed in one of the most terrible times in history,’ Jamie panted, his heart racing. ‘What’s happening, Doctor?’

The Doctor remained where he had fallen, lying on top of his companions. ‘The First World War. It lasted from 1914 to 1918—four years when the whole of Europe went mad. Eventually, the Americans and Japanese and almost everyone joined in. They all believed they were right and that they were heroes.’

They looked up. Standing on the edge of the crater was an attractive young woman in a long khaki skirt and a matching military-style jacket.

Jamie was the first to scramble to his feet. ‘Where are we?’

‘Between the lines,’ said the young woman. ‘No place for civilians. I’m heading for Ypres but I seem to have got lost.

Can I give you a lift in my ambulance?’

The Doctor stood up and helped Zoe to her feet. Over the brim of the crater he saw a khaki-coloured truck bearing a large red cross. ‘That’s very kind of you, ma’am, but you see—’

He stopped short. Emerging from another crater were two soldiers with spiked helmets. They levelled their rifles at the young lady ambulance driver and at the Doctor.

‘Oh dear,’ said the young Englishwoman. ‘I’m afraid we are now all prisoners of war.’ She seemed quite unruffled.

The Doctor, Zoe and Jamie sat on the floor in the back of the ambulance as it trundled along a bumpy road through wastes of mud. One of the German soldiers stood over them, rifle at the ready.

The soldier said nothing. He looked tired, hungry, and unwashed.

The Doctor shook his head. ‘Remember his companion is holding a gun on our lady driver—’

The ambulance stopped with a jolt. Somewhere beyond their vision shots were fired and men shouted. The German soldier jumped down from the back of the ambulance, just in time to be met by two British soldiers.

Resigned, the German dropped his rifle and raised his hands.

One of the British soldiers called, ‘There’s three civilians in the back, sir.’ He looked up at the Doctor. ‘You lot, out.’

The trio descended into the road. The ambulance had been surrounded by half a dozen British soldiers. The two Germans stood with their hands clasped behind their necks, awaiting their fate. A young officer came towards the Doctor.

‘I’m Lieutenant Carstairs. Are you people French or Belgian?’

‘We’re neither,’ said the Doctor.

The officer turned to the young Englishwoman. ‘Who are they? Where did you find them?’

‘No place for civilians. Tell you what,’ Carstairs said to the Doctor, ‘we’ll get you to base. Lucky for you that we ambushed the ambulance. Otherwise by tonight you’d be eating German sausage. Or dead.’ He laughed.

‘There you are,’ said the sergeant. ‘A drop of British brew will buck you up.’ He handed around three mugs of steaming hot tea. The mugs looked as though they hadn’t been washed since they were new.

‘Thank you,’ said the Doctor.

‘They’re all talking about you lot in the dug-out,’ said the sergeant. ‘You’ll see, in no time you’ll all be interned somewhere safe.’ He grinned and went back to making tea for himself and other soldiers.

The trio were squatting on slatted planks in the bottom of a deep trench. The walls of the trench were higher than a man, and the trench ran as far as the eye could see.

Jamie sipped his tea. ‘Is this how they fought your First World War? Sitting in trenches?’

‘The trench,’ said the Doctor, ‘was peculiar to that war.

Before 1914 people charged about on horses, and armies took up positions and had set battles. This war was different. You see, they had invented the machine-gun but they hadn’t developed the tank, not until towards the end.’

‘I don’t understand,’ moaned Zoe. ‘My clothes are filthy, I’m wet, it’s uncomfortable, and I don’t know what you’re talking about.’

‘Then I shall explain. Armies used to advance on each other. But once you have the machine-gun you can stop soldiers coming at you. You simply mow them down. The only way to advance on a machine-gun is with a tank. But they haven’t got tanks yet. So both sides dug trenches. The trench we’re in probably goes on for hundreds of kilometres, right across Europe.’

‘It’s more than daft,’ the Doctor retorted. ‘It was terrible. Every now and then one side or the other goes over the top. They climb out, hundreds of them, and go charging through No Man’s Land towards the enemy’s trenches. They know that the first wave will be wiped out by enemy machine-guns. The second wave, following immediately behind, will lose fifty per cent. With luck, some of the third wave will reach the enemy trenches while the machine-gunners are re-loading. Once there, they kill every enemy soldier in sight and try to take the trench. An advance like that may push the front line forward by one kilometre at the cost of ten thousand soldiers’ lives.’

Jamie and Zoe said nothing for a few moments. Then Jamie said, ‘I asked you what that awful smell is, Doctor?

‘That smell,’ said the Doctor, ‘is death. It’s all around us. I told you, this is one of the most terrible times in history.’ He put down his mug, the tea untouched.

‘Anyway, I think the time has come for us to move on. If we leave here now we may be able to get back to the TARDIS before nightfall. You two stay where you are while I spy out the land.’

The Doctor rose and went to a crudely made ladder that stood propped against the side of the trench. Checking that the sergeant and his friends were busy making tea, he began to climb. As soon as he reached the top and put his head up over the edge of the trench, there was a burst of machine-gun fire. He ducked down.

The Double Dabble Surprise by Beverly Lewis
All That Lives by Melissa Sanders-Self
Danger Close (The Echo Platoon Series, Book 1) by Marliss Melton
The Alien by K. A. Applegate
Zachary David Productions by Gina Watson
The Citadel of the Autarch by Gene Wolfe
Starbridge by A. C. Crispin
Faerie Wars 02 - The Purple Emperor by Brennan, Herbie
Wait for Me by Diana Persaud
In Times of Trouble by Yolonda Tonette Sanders
Our partner