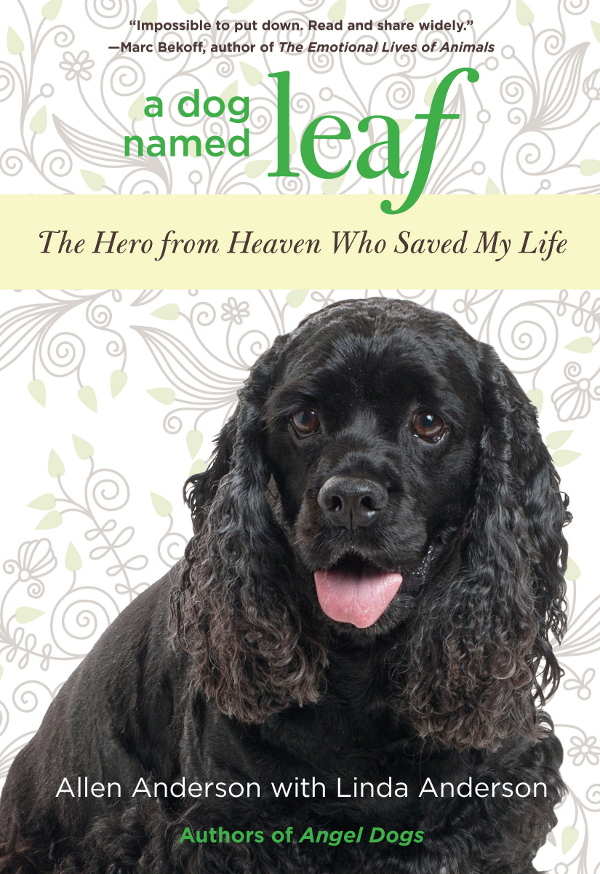 A
LSO BY
A
LLEN AND
L
INDA
A
NDERSON

Dogs and the Women Who Love Them: Extraordinary True Stories of Loyalty, Healing & Inspiration

Angel Dogs with a Mission: Divine Messengers in Service to All Life

Saying Goodbye to Your Angel Animals: Finding Comfort After Losing Your Pet

Animals and the Kids Who Love Them: Extraordinary True Stories of Hope, Healing, and Compassion

Horses with a Mission: Extraordinary True Stories of Equine Service

The Hero from Heaven Who Saved My Life

Some names and details concerning private individuals and the chronology of certain events have been changed.
A Dog Named Leaf: The Hero from Heaven Who Saved My Life
is based on the authors’ memories and interpretations of events.

ALL RIGHTS RESERVED. No part of this book may be reproduced or transmitted in any form by any means, electronic or mechanical, including photocopying and recording, or by any information storage and retrieval system, except as may be expressly permitted in writing from the publisher. Requests for permission should be addressed to Globe Pequot Press, Attn: Rights and Permissions Department, PO Box 480, Guilford, CT 06437.

Angel Animals™ is a trademark of Allen and Linda Anderson. Lyons Press is an imprint of Globe Pequot Press.

C
HAPTER
F
IVE
: Never Give Your Wife a Memo

C
HAPTER
T
WELVE
: Just When You Think It Can’t Get Any Worse

C
HAPTER
T
HIRTY
: Knocked Down but Not Out

C
HAPTER
T
HIRTY
-O
NE
: My Mission, Should I Choose to Accept It

C
HAPTER
T
HIRTY
-T
WO
: How Far Have You Come?

About the Authors and Angel Animals Network

“Nothing is as important as going home at the end of your watch. Nothing.”

M
Y MENTOR
, B
RUCE
M
ATHIS, AN EXPERIENCED POLICE OFFICER, ONCE SAID
these wise words to me, a rookie cop, during one of our patrols together.

Unlike some veterans I’d spent time with, Bruce had not grown cynical and jaded after seeing firsthand the worst in human nature. Instead, he was respectful and gracious with everyone. He often flashed a crooked grin that revealed his quirky sense of humor and defused tension in stressful situations. I was nervous about doing a good job, but being around Bruce put me at ease.

One afternoon while Bruce and I patrolled his regular beat, a middle-class residential area, the horn of our police car started beeping on its own. A middle-aged couple looked up from weeding flowers in their front yard. They must have thought we honked the police car horn at them, so they waved at us. Bruce and I smiled and waved back. Two blocks down the road, our horn beeped again. Several people standing at a bus stop looked at us. One gave a hesitant wave.

As the horn continued its beeping, we passed seniors taking leisurely walks. They waved and smiled at us. We waved and smiled back at them. “It’s an electrical short,” Bruce said, laughing. “Looks like we’re Officer Friendly today.” For the remaining hour of our shift, Bruce’s horn beeped every five to ten minutes. We continued to patrol the neighborhood like homecoming queens waving from a parade float.

During my week riding in his patrol car, I came to think of Bruce as a friend. He seemed to have taken a liking to me too. Before I took my first solo assignment in a busy, more crime-filled zone than his, Bruce said, “I live for my wife and child. They are everything to me.” He added, “Nothing is as important as going home at the end of your watch. Nothing.”

Although my sparse bachelor’s apartment wasn’t much to go home to, I thought I understood what he meant.

Three years later, while moonlighting as a security guard at Lenox Square, a mega-mall in Atlanta, a burglar shot Bruce. He’d surprised the thief in a large, isolated storage room. From what I heard later, by the time someone found him, it was too late. Bruce was only in his midthirties. Grief-stricken and enraged after the news about his death circulated through the police station, I sat in my patrol car and asked, “Why?”

During the funeral I glanced over at Bruce’s wife, a young woman in her twenties. She looked broken. Her eyes were reddened by the flow of tears. Her child, now fatherless, stood motionless. Bruce had provided the content of her life. Now she looked as empty as a book with blank pages.

By the time of Bruce’s death, I had recently married my amazing, talented, and beautiful wife Linda. I had adopted Susan and Mun, the two children she had adopted from Korea. I loved my new family with all my heart. Would they one day stand like Bruce’s wife and young child, facing life without me? Then I remembered Bruce’s rule. I would do everything in my power to stay safe.

Soon after Bruce died I answered a routine call for suspicious drug activity by several young males. I pulled up in my patrol car without my sirens blaring or blue lights flashing. It was dusk, and shafts of sunlight filtered through the clouds. When I exited the car, three young men immediately scattered in different directions.

I don’t know what compelled me, but I took off on foot after one of them. Normally I would have gotten more information from the person who had called the police. The men probably lived in this housing project, and someone would know them. Instead, I gave chase like a dog running after a thrown tennis ball. I even thought,
This is not who I am. Be careful.
Still, I ran faster.

The man I was chasing suddenly flashed around the corner of the apartment building, and I lost sight of him. It was getting darker. It occurred to me that I might slam into a wire clothesline or trip over scattered debris. I even heard what sounded like Bruce’s voice shouting “Stop!” But that didn’t stop me. I had to catch this guy.

Around the corner, about twenty-five feet away, the man crouched behind the apartment building. He pointed his gun directly at my head. I was out in the open. No cover. I clumsily grabbed my gun out of my holster, raised my firearm, and aimed at him. And waited. The young man slowly lowered the weapon to his side. But he kept it firmly locked in his hand.

A second police unit pulled into the housing project right then, and Officer Jackson, a husky man in his late twenties, jumped out of the car. He had a reputation for overreacting and occasionally using excessive force at any hint of resistance, so I was worried about what he might do. Jackson ran toward me, and we both aimed our guns at the young man. I yelled, “Drop it!”

In the longest two seconds of my life, I waited. At last, the man placed his gun down on the dry, hard dirt. Jackson and I cuffed him. While we walked him to the police unit, I read the man his rights. Jackson shoved the subject into the back of the patrol car. He looked at me and said, “This could have been a good shooting.” He was talking about shooting an armed man who had refused to drop his weapon. If our lives had been in jeopardy at any time during the incident, use of deadly force would have been justified.

“You take it,” I told Jackson, giving credit for the arrest to him. I felt embarrassed. How stupid of me to chase the guy. I walked to my car, shaking my head. “Why didn’t he shoot?”

Some would say I was lucky. Some would say I was protected. Others might say I was just a stupid young cop. I think it might be a combination of all three. I felt gratitude for the God-given protection that made it possible for me to go home one more night to my wife and children.

Over my eight years as a police officer, I was spared many times from being injured or killed. Linda began calling me “Miracle Man.” I silently repeated Bruce’s rule at the beginning of each shift. In my mind’s eye I saw his big easy smile, as he reminded me to never forget it.

Years later there would be another kind of weapon aimed at my head with its trigger cocked. My new situation would be as life threatening as any I’d faced while doing police work. I would be in a different city, with my children grown. My wife and I would have embarked on a new path of writing, not mystery novels but animal books. Into that mix there would come a dog who was like none I’d ever known. This book tells the extraordinary true story of that rescued dog who stood between the threat of death and me—and how we made a pact to help each other survive.

The Black Stallion's Courage by Walter Farley
Works of Ivan Turgenev (Illustrated) by IVAN TURGENEV
Microsoft Word - T108JustDesserts.doc by Administrator
A Whale For The Killing by Farley Mowat
Warmed and Bound: A Velvet Anthology by ed. Pela Via
Dodger and Me by Jordan Sonnenblick
Amends: A Love Story by E.J. Swenson
Natural Attraction by C L Green, Maria Itina
The Worry Web Site by Jacqueline Wilson
Mary Connealy by Golden Days
Our partner