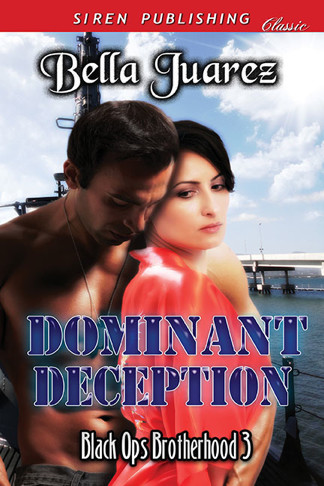 Navy SEAL Captain Jack “Rock” O’Malley is playing a deadly computer game with a hidden enemy. Jack must look outside his SEALs to an unlikely savior. Anna Santiago keeps her head down as a quiet system administrator hiding a painful past. Anna buried her outgoing, confident personality along with her husband and daughter. Jack sees behind the glasses and is drawn to the irresistible Anna. Both fight the pull of a powerful attraction. Can Jack keep his relationship with the unwilling Anna professional?

In fighting an enemy he can’t see, Jack drags the reluctant Anna into his Black Ops world. They are sucked into a cyber rabbit hole of dire consequences. Jack and his SEALs discover that his beloved Anna is the terrorists' next target, and he is faced with a choice that could end his military career and possibly his life. Can Jack and his SEALs keep Anna alive before the terrorists stalking him decide it's game over?

by Bella Juarez from BookStrand.com or its official distributors, thank you. Also, thank you for not sharing your copy of this book.

This is Bella Juarez’s livelihood.

It’s fair and simple. Please respect Ms. Juarez’s right to earn a living from her work.

Thank you to my family and friends who stood by me as I chased this crazy dream of writing. A special thanks to my technical advisor D.W. Peterson and his skills at finding all things weapons and tactics. Again, thank you, Heather Rainier and Corinne Davies, for being wonderful mentors and for your friendship. Thank you, Stormy Pate, for patiently beta reading my work and helping me plug holes.

Thank you to those who inspire the Black Ops Brotherhood series, the men and women serving in the United States military both past and present. Thank you for your extraordinary character, dedication, and service. Thank you for keeping us safe.

Thank you, Stephanie Shea, at Siren Publishing for all your encouragement and editing skills. You make the story shine.

Joe Paeck scrolled through the spreadsheet and shook his head. The numbers he was looking at were astronomical. He kept shaking his head.
Special projects sucked
. His boss assigned him ten specific government contractors and put him on second shift just so he could audit these companies for the Department of the Navy. What his boss was asking was an impossible task. There was no way to keep up with the spending and all the money that flowed out of the coffers of the Department of Defense and all their contracts. Because of the sheer amount of paperwork, it was impossible keeping on top of DoD logistics people who got careless setting aside money and paying thousands of government services contractors in the system.

Joe ran the small macro modified from one he’d found off the Internet to catch inconsistencies in contracts and how they were paid. He would search a particular contracting branch and look at the companies with the contracts and matched criteria. At random, he would ensure the small number he audited were legitimate and receiving reasonable payables from government monies. The report was run once a month after he completed a certain number of audits.

Joe didn’t have anyone breathing down his neck this late at night, and he was curious to find out just how much the Navy and Marine Corps had spent since the Global War on Terror began. He decided to fool around and change the usual query he made of the homegrown computer program, so, he broadened the dates for the audits to the last six months of this year.

“Just for shits and giggles…” he said as he hit enter on his keyboard.

Joe dug into the bag of chips lying on his desk. He was midway through a bite when he stopped short and frowned at his computer screen.
What the hell?
Thirty-three mismatches in payments versus invoicing and allowable payments for goods and services popped up on the screen. The total amount of overpayments was 1.2 million dollars. He printed the results and studied them a moment.
This kind of discrepancy should’ve been caught months ago.
I couldn’t have been off that much!
Figuring he must’ve done something wrong, Joe took the papers and threw them away. He ran the macro again, this time careful to put the correct parameters he wanted into the pop-up windows. The query returned the same results.

“What the fuck?” Joe whispered.

Joe closed the program and restarted the computer. He was careful this time to open the database and this time he exported two years of data from the GWOT logistics system he was auditing. He looked over the results and made sure there was nothing out of place on his spreadsheet. He ran the macro once more.

Joe opened the macro and looked at the code. From what he could tell, nothing had changed. It was a simple utility, and once he had it running the way he wanted, it never failed him. He ran another query, for the last fiscal month.

Joe ran a query for the last fiscal quarter and got no mismatches. He reran the query for the last two years. It returned the seventy-five mismatches. Joe slumped back.
This is impossible! How could I have missed these mistakes?
Joe shot forward in his chair suddenly remembering this was a familiar problem but he’d decided to brush it aside until after his vacation. He dug through his desk for a folder and found a set of notes from a meeting.

A Marine Corps supply sergeant called six months ago. She’d been receiving bills for services that had been provided but were beyond the usual amount that should’ve been spent. She was being told by someone with the Army she’d to approve bills and pay them. The sergeant had also been complaining about paying out for vaccines and medications she hadn’t ordered. She was complaining because Marines at Brooke Army Medical Center in San Antonio, Texas, were being informed they were out of funds for goods and services they needed on a monthly basis.

The situation became critical when the Corps was denied funds to use for the wounded warriors coming home and transitioning out of the military. At that point she’d involved her commanding officer, and the audit agency had been receiving calls on a monthly basis from this bitchy woman and her colonel. Her colonel had finally jacked up the chief of the agency. The agency decided to send Joe down to investigate and he found nothing unusual at the time. The Marine Corps was given more money to fund the program and everyone was happy.

From what Joe was seeing now, it seemed as if someone was using the urgency of war to steal millions of dollars. He jotted down some notes and ran a couple of reports from the GWOT logistics system. He tucked away his reports as well as his notes in a secret file that he kept locked in his desk. He would deal with his new discovery once he got back from leave. He thought about the decision to do so. He shrugged it off.
It can wait. Whoever’s doing this ain’t going nowhere.

Joe surveyed his surroundings. It had been crowded every night since he had been here. This was his favorite hunting ground because it was the place the chicks would come right before heading home. They were usually very drunk and very willing by the time they got here. Unlike most of the other clubs centered in downtown Port Aransas, Sharkey’s was in a strategic location. It was near all the better condos and a couple of hotels on the island. Sharkey’s was on the outskirts of town and it was the closest to Joe’s time-share. Joe fingered the beads that hung around his neck and spotted a tight little blonde who just walked in the doorway.

Damn
! he thought. He hadn’t made it up to her face, but he didn’t need to see her face for what he wanted. That petite body would do nicely. She turned and looked directly at him and smiled as if she knew exactly what he was thinking. Joe’s heart skipped a beat. The blonde beauty met his heated stare and started walking toward him.

She can’t be looking at me.

She was wearing several layers of beads and every guy in the place took notice as she made her way through the crowded club. In her tight shorts, bikini top, and beads, she was sexy enough to leave everything to his imagination. Her blonde hair was pulled into a ponytail that hung midway to her shoulders. His mouth began to water.

“Hello,” she said in a sultry voice that matched her body. She reached out and touched a set of green beads resting against his chest. “What do I have to do to get these? I don’t have any green ones.
Yet
.” She lifted the green set she’d been playing with.

“Take me home and take advantage of me,” Joe said.

“That’s it? I thought it would be something hard,” she said with a smile.

Shadow of the Otherverse (The Last Whisper of the Gods Saga Book 3) by Berardinelli, James
Falling Into Darkness: The Under Series Book 1 by Dakota Lake
A Song for Joey by Elizabeth Audrey Mills
The Folded Clock by Heidi Julavits
The Hunters by Tom Young
The Gardens of Nibiru (The Ember War Saga Book 5) by Richard Fox
Magic Hoffmann by Arjouni, Jakob
How I Found You by Gabriella Lepore
Summer in Tuscany by Elizabeth Adler
Falling (Bits and Pieces, Book 1) by Miranda, Shirley
Our partner