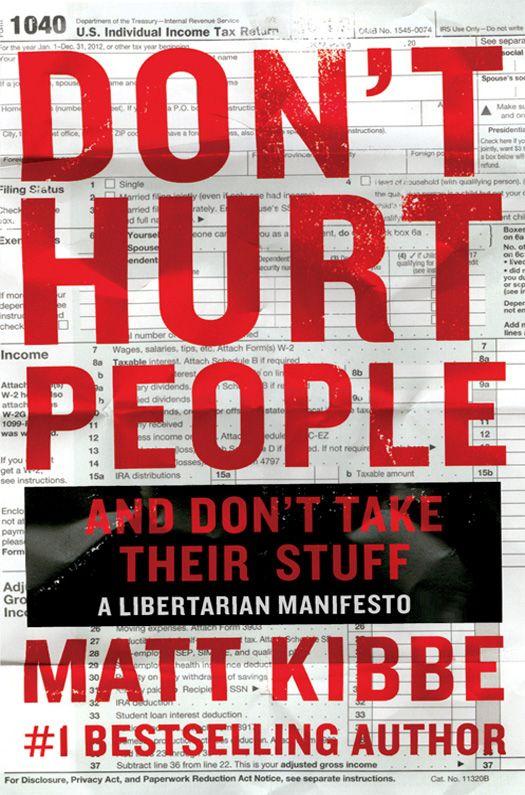 For Terry, who’s always there for me

In the United States, where it has become almost impossible to use “liberal” in the sense in which I have used it, the term “libertarian” has been used instead. It may be the answer; but for my part I find it singularly unattractive. For my taste it carries too much the flavor of a manufactured term and of a substitute. What I should want is a word which describes the party of life, the party that favors free growth and spontaneous evolution. But I have racked my brain unsuccessfully to find a descriptive term which commends itself.

—
FRIEDRICH HAYEK
, “
WHY I AM NOT A CONSERVATIVE
”

A
BOUT THE
P
UBLISHER

DON’T HURT PEOPLE, AND
don’t take their stuff. That’s it, in a nutshell. Everyone should be free to live their lives as they think best, free from meddling by politicians and government bureaucrats, as long as they don’t hurt other people, or take other people’s stuff.

I believe in liberty, so the rules are pretty straightforward: simple, blindly applied like Lady Justice would, across the board. No assembly required.

To me, the values of liberty just seem like a commonsense way to think about political philosophy. The rules are easily understood, our aspirations for government are modest and practical, and our designs on the lives and behavior of others are unpresumptuous, even humble.

There is a renewed and heated debate about the future of America going on right now. Our government seems broken. What is the best way to get our mutually beloved country back on track? People are seeking answers. When you get past all the acrimony and all the name-calling, the question we are all debating is really quite simple: Do you believe in the freedom of individuals to determine their own futures and solve problems cooperatively working together, or do you believe that a powerful but benevolent government can and should rearrange outcomes and make things better?

More and more, the debate about how we live our lives and what the government’s legitimate role is in overruling our personal decisions has become increasingly polarized, even hostile. The president is fighting with Congress. Democrats are fighting with Republicans. Conservatives are fighting with liberals. Libertarians are fighting with “neocons.” Political insiders and career bureaucrats are pushing back against the wishes of grassroots Americans. And left-wing “progressives” are attacking, with increased vitriol, tea party “anarchists.” It’s enough to make your head spin, or at least make you rationally opt out of the whole debate as it is defined by all of the experts that congregate in Washington, D.C., or on the editorial pages of the most venerated newssheets of record.

Normal people—real Americans outside the Beltway—have better things to do. They should focus on their lives and their kids and their careers, their passions and their goals and their communities. Right?

Except that we just can’t anymore. It seems like the decisions Washington power brokers make about what to do for us, or to us, or even against us, are having an increasingly adverse impact on our lives. Young people can’t find jobs, and can’t afford to pay off their student loans. Parents are having an increasingly hard time providing for their families. Seniors can’t afford to retire, and their life savings seem to be shrinking for reasons that are not quite clear. And every one of us is somehow being targeted, monitored, snooped on, conscripted, induced, taxed, subsidized, or otherwise manipulated by someone else’s agenda, based on someone else’s decisions, made in some secret meeting or by some closed-door legislative deal in Washington, D.C.

What gives, you ask?

It seems like we have reached a tipping point where governance in Washington and your unalienable right to do what you think best for yourself and your family have collided. You and I will have to get involved, to figure out what exactly the rules are, and to set them right again.

T
HERE
A
RE
R
ULES

I am not a moral philosopher and I don’t particularly aspire to be one. That said, I have stayed at more than one Holiday Inn Express. That makes me at least smart enough to know what I don’t know. So the rules that follow represent my humble attempt to boil down and mash up all the best thinking in all of human history on individualism and civil society, the entire canon of Judeo-Christian teachings, hundreds of years of English Whig, Scottish Enlightenment, and classical liberal political philosophy, way too much Friedrich Hayek and Adam Smith, a smattering of karma and Ayn Rand, and, if my editor doesn’t excise it out of the manuscript, at least a few subliminal hat tips to
The Big Lebowski
. All of this in six convenient “Rules for Liberty.”

What on earth am I thinking? My inspiration, in an odd way, is Saul Alinsky, the famous community organizer who was so influential on two of his fellow Chicagoans—Barack Obama and Hillary Clinton. Everybody’s favorite leftist famously wrote thirteen
Rules for Radicals
for his disciples to follow. His book is “a pragmatic primer for realistic radicals” seeking to take over the world.

Alinsky actually dedicates his book to Lucifer. I’m not kidding.

What the hell was he thinking? Just for fun, Google “Alinsky” and “Lucifer” sometime and see for yourself the rhetorical knots his admirers tie themselves into trying to explain the dedication to their favorite book, penned by their cherished mentor. Did Alinsky really mean it? Who knows, but tongue-in-cheek or not, it seems to reflect the by-any-means-necessary spirit of the book.

So, how could I find inspiration here? It’s no secret that many of us liberty-minded “community organizers” have expropriated some of Alinsky’s tactical thinking in the defense of individual freedom. But I think there’s a categorical difference between us and them.
Rules for Radicals
is not a tome about principles; it is a book about winning, sometimes with wickedly cynical and manipulative tactics. The principles seem to be missing, or an afterthought, something to be figured out later, air-dropped into the plan depending upon who ends up in charge. This cart-before-the-horse thinking seems to be consistent with the progressive mind-set. The rule of man instead of the rule of law, or the writing of a blank check for government agents empowered with great discretionary authority over your life. If we just suspend our disbelief and trust them, everything is supposed to turn out fine. Better, in fact.

We, on the other hand, start from first principles. The nice thing about the Rules for Liberty is that our values define our tactics, so there’s no ends-justify-the-means hypocrisy. Liberty is right. Liberty is the basis for social cooperation and voluntary organizing. Liberty allows each of us to achieve what we might of our lives.

Liberty is good policy, and good politics. But good politics is a consequence, not the goal. “Liberty is not a means to a higher political end,” wrote Lord Acton. “It is itself the highest political end. It is not for the sake of a good public administration that it is required, but for the security in the pursuit of the highest objects of civil society, and of private life.”
1

It’s common sense. The Rules for Liberty are applied equally, without bias or discrimination, and don’t allow the moving of goalposts midgame. These rules don’t permit gray-suited middlemen to rearrange things for your special benefit, or against your personal preferences, arbitrarily.

Adam Smith, the Scottish moral philosopher widely considered the father of modern economics, based his economic thinking on the mutually beneficial gains achieved from voluntary cooperation. But cooperation and exchange are based on mutually understood values. His most important work, a foundation for all classical liberal thinking, is
The Theory of Moral Sentiments
. In my book
Hostile Takeover,
I briefly discuss Smith’s influence on the work of Nobel laureate economist Vernon Smith, his inquiries into the ways that the rules of community conduct function in real life. The rules that allow for peaceful cooperation emerge, seemingly spontaneously, from human actions.

How do such social norms—the rules—emerge? The question is one that F. A. Hayek, also a Nobel laureate, spent the latter half of his professional career exploring. Both Vernon Smith and Hayek find the basis for their inquiry in Smith’s
Moral Sentiments:

The most sacred laws of justice, therefore, those whose violation seems to call loudest for vengeance and punishment, are the laws which guard the life and person of our neighbor; the next are those which guard his property and possessions; and last of all come those which guard what are called his personal rights, or what is due to him from the promises of others.

This first rule seems simple enough, and no decent person would hurt another unless the action was provoked or in some way justified. Free people just want to be left alone, not hassled or harmed by someone else with an agenda or designs over their life and property. We would certainly strike back if and when our physical well-being is threatened—if our family, our community, or our country were attacked. But we shouldn’t hurt other people unless it is in self-defense or in the defense of another against unchecked aggression.

Libertarian philosophers call this the Non-Aggression Principle (NAP). Don’t start a fight, but always be prepared, if absolutely necessary, to finish a fight unjustly instigated by someone else. Here’s how Murray Rothbard put it:

The fundamental axiom of libertarian theory is that no one may threaten or commit violence (“aggress”) against another man’s person or property. Violence may be employed only against the man who commits such violence; that is, only defensively against the aggressive violence of another. In short, no violence may be employed against a non-aggressor. Here is the fundamental rule from which can be deduced the entire corpus
of libertarian theory.
2

Justice, says Adam Smith, is based on a fundamental respect for individual life. “Death is the greatest evil which one man can inflict upon another, and excites the highest degree of resentment in those who are immediately connected with the slain,” he writes. “Murder, therefore, is the most atrocious of all crimes which affect individuals only, in the sight both of mankind, and of the person who has committed it.”
3

The Bishop's Wife by Mette Ivie Harrison
Uncorked by Marco Pasanella
A Sea of Shields (Book #10 in the Sorcerer's Ring) by Morgan Rice
Taming The Boss (Billionaires In The City Book 7) by Crowe, Mallory
The Anarchist Cookbook by William Powell
Carnivorous Nights by Margaret Mittelbach
Ambrosia's Story by Tammy Marie Rose
Shadowline Drift: A Metaphysical Thriller by Alexes Razevich
The Unwanted Heiress by Amy Corwin
What Ya Girl Won't Do by Brandi Johnson
Our partner