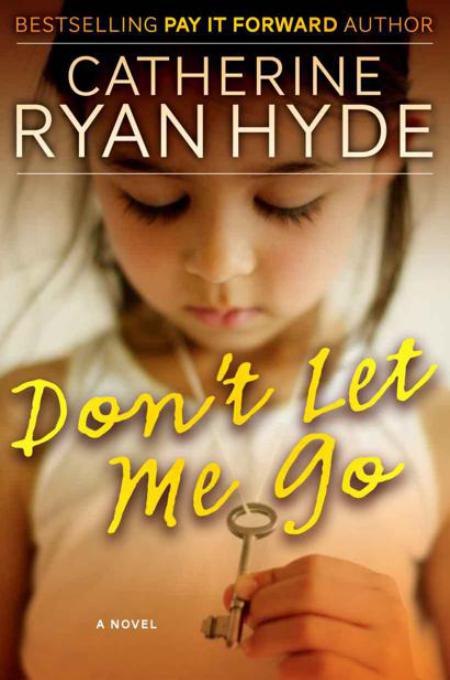 Former Broadway dancer and current agoraphobic Billy Shine has not set foot outside his apartment in almost a decade. He has glimpsed his neighbors—beautiful manicurist Rayleen, lonely old Ms. Hinman, bigoted and angry Mr. Lafferty, kind-hearted Felipe, and 9-year-old Grace and her former addict mother Eileen.

But most of them have never seen Billy. Not until Grace begins to sit outside on the building’s front stoop for hours every day, inches from Billy’s patio. Troubled by this change in the natural order, Billy makes it far enough out onto his porch to ask Grace why she doesn’t sit inside where it’s safe. Her answer: “If I sit inside, then nobody will know I’m in trouble. And then nobody will help me.”

Her answer changes everything.

By the bestselling author of WHEN I FOUND YOU, SECOND HAND HEART, and PAY IT FORWARD, DON’T LET ME GO is the heart-breaking, funny, and life-affirming story of a building full of loners and misfits who come together to help a little girl survive—and thrive—against all odds.

In memory of Pat, who got me into my first writers’ workshop…somehow.

Every time Billy looked out his front sliding-glass door, he saw the ugly, gray L.A. winter afternoon move that much closer to dark. A noticeable difference each time. Then he laughed, and chastised himself out loud, saying, “What did we think, Billy Boy, that sunset would change its mind and break with tradition just this one night?”

He looked out again, hiding behind his curtain and wrapping it around himself as he leaned in front of the glass.

The little girl was still there.

But he didn’t answer himself. Because he
did
know. So there was really no need to belabor the conversation.

He pulled his old flannel bathrobe over his pajamas, wrapping it too tightly around his stick-thin frame, then tying it with a rope that had replaced the robe’s sash some half-dozen years earlier.

Billy Shine was about to go outside.

Not out the apartment door and on to the street. Nothing that insanely radical. But out on to his little first-floor patio, or balcony, or whatever you might properly call that postage-stamp-sized piece of real estate adorned with two rusty lawn chairs.

He looked out again first, as though he might see a storm or a war or an alien invasion brewing. Some act of God that might justify his failure to follow through. But it was only a tiny bit closer to dark, which was hardly unexpected.

He unwedged the broomstick — the improvised burglar-proof lock for his sliding-glass patio door — coating his fingers with dust and lint as he did so. It hadn’t been moved in ages. And it shamed him, because he prided himself on cleanliness.

“Note to self,” he said out loud. “Clean everything. Even if it’s something we think we won’t use anytime soon. On principle, if for no other reason.”

Then he slid the door open just the tiniest bit, sucking in his breath, loudly, at the feel of the chill outdoor air.

The little girl glanced up, then down at her feet again.

Her hair looked almost comically disheveled, as if no one had brushed it for a week. Her blue cardigan sweater had been buttoned incorrectly. She could not have been more than nine or ten. She was sitting on a step, her arms wrapped around her own knees, rocking and staring at her shoes.

He’d expected something more from her, some more dramatic reaction to his presence, yet couldn’t put his finger on exactly what he’d thought that might be.

He sat gingerly on the very edge of one rusty chair, leaning over the railing, looking down at the little girl’s head from maybe three feet above her.

“A gracious good evening to you,” he said.

“Hi,” she said, in a voice like a soprano foghorn.

It made him jump. He almost upended the chair.

Though hardly an expert on children, Billy reasoned that a girl who looked that depressed should speak in a barely audible voice. Not that he hadn’t heard this little girl’s voice through the walls many times before. She lived in the basement apartment with her mother, so he heard her often. Too often. And she’d never sounded only barely audible. Yet, somehow, he’d expected her to make an exception on maybe just this one occasion.

“Are you my neighbor?” she asked, in the same startling voice.

This time he was ready for it.

“It would seem that way,” he said.

“Then how come I never met you?”

“You’re meeting me now. Take what you can get from this life.”

“Yeah, that’s what everybody says. Do other people say you talk funny?”

“Not that I can recall,” Billy said. “Then again, I don’t talk to enough people to gather a genuine consensus.”

“Well, take my word for it. It’s a weird way to talk, especially to a kid. What’s your name?”

“Where did you get a name like Billy Shine?”

“Where did you get
your
name? Which, by the way, you still haven’t told me.”

“Well, I didn’t get the name Billy Shine from my mother. From my mother I got Donald Feldman. So I changed it.”

“Because I was in show business. I needed a dancer’s name.”

“Not even a little bit.”

“How do you find out what is and what isn’t?”

“You just know it in your heart. So, look. We could sit out here all night and continue this charming exchange. But I actually came out here to ask you why you’re sitting outside all by yourself.”

She moved for the first time since he’d come outside, looking up as if to fact-check his sentence.

“Then what weren’t you cut out for?”

Billy sighed. He had come out here to ask questions, not to answer them. And yet it had seemed so natural, so inevitable, when the roles reversed on him. In fact, he wondered why he’d ever thought he could be the grown-up in this — or, for that matter, any other — conversation. Just good acting skills, maybe. But who even knew where those skills had gone off to these days? What you don’t use, you lose.

“Everything,” he said. “I wasn’t cut out for anything. Life. Life is something I’m just not cut out for.”

“Not well, though. I am not turning in a suitable performance. Thank God the critics have moved on to more promising pastures, and not a moment too soon. Could you go inside if you tried? I mean, if you needed to?”

She held it up in the fading light. Held it for him to see. A shiny, new-looking key dangling on a cord around her neck. It caught and reflected a beam of light from the streetlamp, which had just come on. A miniature flash for Billy’s eyes.

Shine, Billy thought. I
do
remember the concept.

“I’m having a little trouble,” he said, “understanding why anyone would be outside when they could just as easily be in.”

“Don’t you ever go outside?”

Oh, good God, Billy thought. Here we go again. There was just no way to stay on top of the conversation.

“Not if I stay this close to home.”

“Well,
I’m
scared. I look out and see you out here all by yourself, and
I’m
scared. Even if you’re not. So maybe I could talk you into doing me a favor. Maybe you could go back inside so I don’t have to be scared any more.”

The little girl sighed grandly. Theatrically. A girl after Billy’s own heart.

“
Oh, OK.
I was really only going to stay out till the streetlights came on, anyway.”

And she trudged up the stairs and disappeared inside.

“Great,” Billy said out loud, to himself, and to the dusk. “If I’d known that, I could have saved myself a whole lot of honesty.”

Billy didn’t sleep well that night. Not at all. He wasn’t able to prove definitively that the massive, unspeakable act of going outdoors had caused the upset and the bad night, but it seemed reasonable to think it had. It was a place to which he could direct blame, at least, which was better than nothing.

The Howling Delve by Johnson, Jaleigh
The God Particle by Richard Cox
Seeing Stars by Christina Jones
The Whispering Muse by Sjon
Fancy Pants by Susan Elizabeth Phillips
The Story of the Romans (Yesterday's Classics) by Guerber, H. A.
Lizard Music by Daniel Pinkwater
Wood's Wall by Steven Becker
The Savage Murder of Skylar Neese: The Truth Behind the Headlines by Berry, Daleen, Fuller, Geoffrey C.
The Italian Matchmaker by Santa Montefiore
Our partner