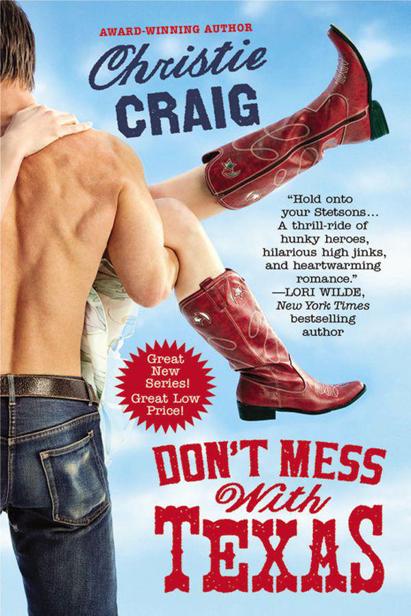 A Preview of
BLAME IT ON TEXAS

Writing is a solitary business, but I didn’t, and couldn’t, have gotten this far without my support system, a system that first and foremost includes my husband. I know the extent of his love when he comes tiptoeing into my office and whispers those sweet heartrending words in my ear: “I’ll do the laundry.” Thank you, Steve.

To my critique group and best friends in the whole world: Faye Hughes, Jody Payne, Suzan Harden, and Teri Thackston, whose support, laughter, and spelling and grammar abilities keep me going. To my newfound critique and walking buddy, Susan Muller, who allows me to rattle on about plot problems for about two miles every day. To my agent, Kim Lionetti, who knows just when to say, “You’re overthinking it again.” To my editor, Michele Bidelspach for helping me make my stories as good as they can get.

At five o’clock on the dot, Nikki Hunt drove past the valet parking entrance to Venny’s Restaurant and turned into the one-car alley lined with garbage Dumpsters. She eased her car over potholes big enough to lose a tire in, and parked her Honda Accord. “It’s the right thing,” she repeated then rested her forehead against the steering wheel. After one or two seconds, she squared her shoulders and mentally pulled up her big girl panties. Letting go of a deep breath, she stared at the Dumpster adjacent to her car and hoped this wasn’t a foreshadowing of the evening.

Though no one would guess it—other than that one bill collector, her bank, and the McDonald’s attendant who’d waited for her to dig out enough change to pay for her sausage biscuit this morning—Nikki couldn’t afford valet parking.

Her local gallery barely made enough money to cover the rent. Who knew that a little downturn in the economy would prevent the general population from appreciating art?

Okay, fine, she knew. She was financially strapped, not stupid. And yeah, she’d also known that opening the gallery had been risky. But at the time, she’d had Jack to fall back on if things got tough. Good ol’ Jack, charming, financially stable, and dependable—dependable, that is, as long as one didn’t depend on him to keep his pecker in his pants.

She pulled a tube of lipstick from her purse, turned the rearview mirror her way and added a hint of pink to her lips.

Please, Nikki, meet me at Venny’s. I made some mistakes, but we can fix it
.

Jack’s words skipped through her head.

Was Jack really going to ask her for a do-over? Was she really contemplating saying yes? And was saying yes the right thing? The questions bounced around her brain, hitting hard against her conscience.

Rubbing her lips together to smooth the pink sheen on her mouth, she looked at the back of the restaurant—probably the most expensive restaurant in Miller, Texas. The one where Jack, the man she considered the love of her life, had proposed to her four years ago. This wasn’t the first time she’d heard from Jack since the divorce. The flowers he’d sent had gone to her grandmother’s retirement center. Someone should enjoy them. The messages where he begged her to take him back went unanswered. She hadn’t even been tempted. Until today.

Today he’d called the gallery right after Nikki had received a call from the retirement home, reminding her that her grandmother’s cable bill was due. Right after she realized she was going to be short paying Ellen, her one and only part-time employee. There’d been desperation in Jack’s voice and it had mimicked the desperation Nikki felt in her own life.

She focused on the rearview mirror again and gave herself a good, hard look. She fluffed her hair, hoping her thick, blond curls would appear stylish and not impoverished. Nana’s cable trumped her regular clip job. Her grandmother had spent thirteen years taking care of Nikki, so the least she could do was allow the woman to watch the cooking network.

And Ellen—how could she not pay the woman who’d become her best friend? The woman who singlehandedly dragged Nikki out of the done-wrong slumps kicking and screaming.

Nikki stepped out of her car. The heat radiating from the pavement assaulted her. She could almost feel her hair frizz. Humidity thickened the air, making it hard to breathe. Or maybe that was just the anxiety of seeing Jack, of making a decision to reenter the holy union—a union that turned out not to be so holy for him.

Passing the Dumpster, she wrinkled her nose and walked faster. The ring of her cell brought her to a stop. She grabbed the phone from her purse, and checked the number.

“Shoot.” Nikki hurried her steps to escape the garbage smell. Common sense told her Nana was playing the timed crossword game with her Ol’ Timers Club. A game that allowed the participant a single one-minute call to someone who might be able to help. But the first time Nana had used her one-call line, she’d been in jail. Sure, Nana had only been arrested once, but bailing your grandmother out of the slammer was not something one tended to forget.

“Name of the club you join when you get it on at high altitudes, twelve letters,” Nana said.

“What kind of crossword puzzle is this?” Nikki asked.

Figures. The Ol’ Timers Club members, on average, had a better sex life than Nikki did. “Mile High Club. Not that I belong.” She cut the corner to the restaurant, welcoming the warm scents of Venny’s menu items.

“You should,” Nana said.

What dress rehearsal?
Then Nikki remembered. Her grandmother and several of the Ol’ Timers had gotten parts in a small neighborhood theater show.

“I can’t, but I’ll come to the show.” If she could afford the ticket.

“About to walk into a restaurant.”

“No.”
Just possibly coming to get proposed to for the second time by the man I used to love
.

Used to?
Nikki stopped so fast she almost tripped. Didn’t she still love Jack? Weren’t there still feelings underneath the pain of his infidelity? Because if she didn’t really have feeling for him then…

“Who are you meeting?” Nana asked.

In the background, Nikki could hear Nana’s friend Benny call out, “Five seconds.”

“Nikki Althea Hunt, do not tell me you’re meeting that lowlife scum of an ex—”

“Love ya.” Nikki hung up, dropped her cell back into her purse and tried to ignore the doubt concerning what she was about to do. Instead, she wondered what the hell her mother had been smoking when she named her Althea. Then again, figuring out what her mother was smoking when she’d dropped six-year-old Nikki at Nana’s with the request that Nana raise her was a much better puzzle. And not one Nikki liked to think about, either.

Walking into the restaurant, pretending she belonged in the rich, famous, and lawyer circle, Nikki was embraced by the scents of beef burgundy. Her stomach gave one last groan, then died and went to heaven without looking back. The biscuit she’d scraped change together for this morning was a forgotten memory.

“Meeting someone?” the hostess asked as Nikki peeked into the dining room.

“Jack Leon.” Nikki spotted him sitting at the table—the same table where he’d proposed to her—talking on his cell phone.

“This way.” The hostess started walking but Nikki caught her arm and yanked her back. The woman’s eyes rounded.

“Just a second, please.” Nikki continued to stare at Jack and waited. Where was it? Where was the heart flutter when her gaze landed on him? A light flutter would do. That’s all she was asking for.

No flutters, damn it. The only emotion bumping around her chest was residual fury at finding him in her gallery office, on the sofa, banging her hired help.

Not a good memory to be hanging in her mental closet
tonight. Not if Jack was going to propose. Because if she said yes, then she might be the one banging her ex.

“Crappers,” she muttered and her heart did a cartwheel, hitting the sides of her ribs. Nikki had no problem with sex. Not that she’d had any pleasure in a
long
time. A really long time. Like… since Jack.

The truth rained down on her. She wasn’t here because she loved Jack. If she went back to him it wouldn’t even be for pleasure. It would be for money. Sure, the money was to pay Nana’s cable, to pay Ellen, and to keep her gallery afloat, but still… the hard fact was she’d be having sex for money.

“Oh shit!” Could she stoop that low?

My name is Nikki Hunt, not Nikki Name Your Price
.

“I don’t think I can do this,” she muttered and tightened her hold on the hostess’s arm.

“You don’t think you can do what?” asked the hostess.