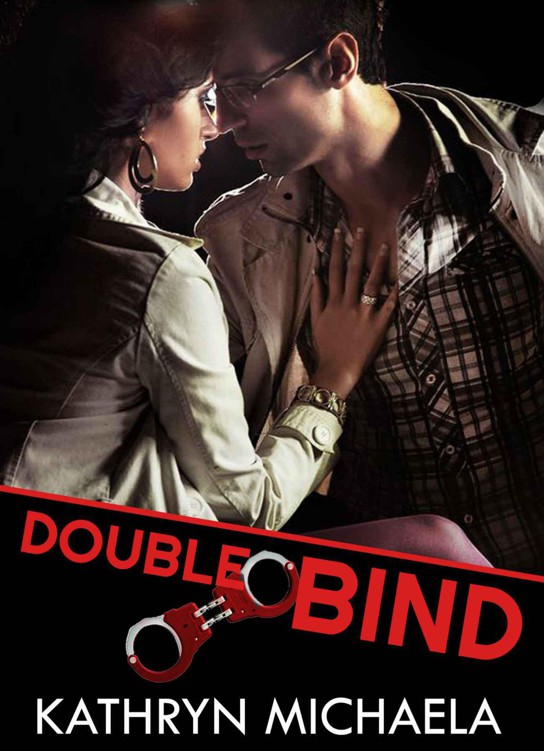 Double Bind
By: Kathryn Michaela
Copyright © 2013
All Rights Reserved
No part of this publication may be copied, reproduced in any format, electronic or otherwise, without prior consent from the copyright owner and publisher of this book

Disclaimer
This is a work of fiction. Names, characters, businesses, places, events and incidents are either the products of the author’s imagination or used in a fictitious manner. Any resemblance to actual persons, living or dead, or actual events is purely coincidental.

When her boss walked in, Sarah almost choked on her yawn.

It wasn’t her fault.

For some reason all of her projects had been sidelined for the day, and she’d spent the entire day hacking around the web-blockers so that she could watch YouTube Kitties and float on Facebook.

Her boss stood in the doorway, looking as morose as ever.

Despite being one of the top executives in a multibillion dollar company, most of the time Jared looked like a kicked puppy.

He refused to look at Sarah, but stood sadly in the doorway, scuffing one of his shoes against the faded carpet.

Sarah jerked in her chair, jumping to close out her screen.

He blinked slowly, looking up at her.

About me being locked out of the system.

I was wondering when everyone would get around to getting me back online.”

“No one told you what was going on?”

Sarah threw up her arms, “No!

I mean, they told me I was locked out, but that was it.

No reasons why, or any of that.”

“Jared, are you alright?” she asked.

I just didn’t realize you didn’t know what was going on -” his voice trailed off, and he finally dared to look up at her.

“I mean, you should know what was going on.”

Jared was staring at her now, and Sarah looked back confused.

Jared stopped, and then cleared his throat.

“Well, that could be a problem.”

He looked up at her, his brows knotting together.

“I guess I should explain.”

Sarah raised an eyebrow when he didn’t automatically continue.

After a moment he cleared his throat to keep going.

“You’ve been accused of bioterrorism.”

It took Sarah a long moment to process his words.

He shook his head, clearly unwilling to repeat the phrase.

“I don’t know anything about it, but Grisham said that we were legally obligated to fire you, and now the police are here, and -” he trailed off, as Sarah gaped at him.

They think I -” She couldn’t continue, too surprised at his words to keep going.

Too surprised to process all of his words.

After a moment, she turned to him.

Her voice squeaked, and Jared winced.

“Yeah, they wanted to come first, but Grisham insisted that you be fired before they took you in for questioning.

Something about legal and -”

“And that will be quite enough Mr.
Desguard
.” A deep voice said, and we both turned to find a man in a suit standing in front of several police officers.

He was tall and broad, with dark eyes and brows.

Sarah didn’t recognize the man, but from the way he stood, he was obviously attached to the police.

He motioned and the two officers moved into the room.

Jared stepped aside, looking down.

“Ms. Gaul, you are under arrest for acts of terrorism and conspiracy to murder.”

He continued through the spiel, but Sarah gaped at him.

“You can’t be serious!” She said, pulling her arm out of the grip of one of the officers.

“I haven’t done anything!”

He raised his eyebrows, but simply continued through the Miranda Rights.

One of the officers gripped her arm again, and she felt the sharp click of handcuffs around her wrist.

She stomped her foot, silencing him and pushing away from the officer again.

The handcuffs dangled from her wrist.

“You can’t just arrest me!

“Are you seriously resisting arrest?” He asked her.

There was a bite to his voice, and Sarah almost wanted to say yes, just to spite him.

I’m - “ she fumbled for words, but was distracted when the officer stepped in, yanking her arm a little harder than necessary as he pulled it behind her back.

Detective Snyder raised an eyebrow and glanced at Jared.

He cleared his throat as he turned back to Sarah.

“I’m sure Officer Sanchez is being perfectly reasonable.

We’ll explain everything once we get back to the station.”

Sarah shifted, feeling the bite of the handcuffs on her wrists.

They were definitely tighter than necessary “Wait!” She said, as he turned, motioning for the officers to lead her out of the room.

It only took a little pressure from the officer on her right to send pain shooting through her wrists and she hurried forward before they increased the pressure.

She glanced at Jared as he stepped out of the way, his eyes meeting hers sadly.

They escorted her out of the building, completely ignoring her protests.

She screamed and shouted, not caring that she was making a scene in front of her coworkers.

She couldn’t understand why they weren’t doing anything.

They knew she wouldn’t ever misuse
BioGen’s
research to hurt anyone.

Still, no one said anything as they loaded her up into the cop car and drove her away.

She sat, sulking, in the backseat.

She hadn’t even known that bioterrorism had happened; how was she supposed to be the one guilty of it?

When they pulled up to the station, she tensed, ready for the officers to start manhandling her again.

Her wrists and fingers stung by the time they got her inside and handed her over to the booking agents.

He scowled at her as he swung her around to remove her handcuffs, and then made her take off her jacket, pulling everything out of her pockets and putting them in little bags.

“Hey, wait!” She said as they pulled her phone out.

“Don’t I get a phone call or whatever?”

He looked at her grimly.

Sarah wilted a little under his glare.

He looked ready to spit fire.

“But I’ll let you make a call anyway.”

He handed her the cellphone with a scowl.

She was never going to fix this if no one would listen to her.

She didn’t know enough about the law to make them listen to her.

The phone dialed all too slowly, and Sarah tried not to look at the officer glaring at her as she waited.

It rang and rang, and Sarah scrunched up her face.

She never called her friends from work.

They had to know that it was important.

Only the voicemail pinged, Angela’s smooth work voice running over the line.

“This is the phone of Angela Harding.

I cannot come to the phone, but please leave a detailed message and I will get back to you.”

Sarah winced, but waited for the little beep.

Then she spoke in a rush.

They say that I’ve done bioterrorism or something, I don’t even know! You have to come and help me get out.

I didn’t do anything, Angela.

I’m at the police station now and -” The phone beeped again and went dead.

Sighing, Sarah passed the phone over the
the
waiting officer, who bagged it without a second glance.

Then he led her through the complicated process of booking.

Sarah was astonished at all the steps that it took just to put an innocent person in jail.

First came the fingerprinting and paperwork, the photos and more paperwork, and finally they stashed her in a quiet room with a big one way mirror, while the officer went to go and file more paperwork.

She hadn’t done anything wrong.

Why were these things always happening to her?

It seemed like every time she got all her ducks in a row, something insane happened.

Couldn’t she just have a normal bad day like everyone else?

By the time Detective Snyder returned to the room, she was absolutely livid.

She turned to glare at him as he calmly pulled the door shut behind him.

He was holding a folder, probably with all the paperwork she had been filling out.

“I demand that you tell me why I am being held here!”

She cried out, standing as he came into the room.

He didn’t even glance at her as he set the folder onto the table, pulling out a chair for himself across the table.

She continued to stand.

Her whole body was shaking.

She wanted to launch across the table and strangle him.

How dare he seem so smug about this?

When she didn’t sit, he finally looked up at her.

He raised his eyebrows slightly.

“Ms. Gaul,” he said, his warm voice still even and a little cold.

“I promise, everything will be explained in due time.

But I won’t explain anything if you are going to keep standing there glaring.”

Sarah glared at him for a second longer before she collapsed down i a heap into her chair.

She crossed her arms across her chest.

“But you will if I sit here glaring?”