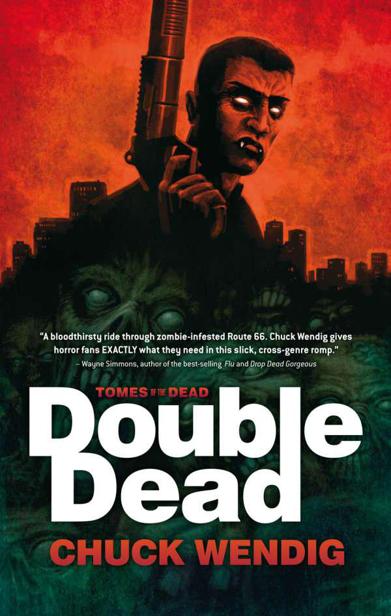 Double dead
:
adj.
Meat that comes from an animal that has died of disease. Does not pass the necessary sanitary standards.

Tomes of The Dead™, Abaddon Books and Abaddon Books logo are trademarks owned or used exclusively by Rebellion Intellectual Property Limited. The trademarks have been registered or protection sought in all member states of the European Union and other countries around the world. All right reserved.

The blood crawled through tight channels and shunted cracks like a rat in a maze. It descended through shattered concrete. It crept down a length of rusty pipe.

Eventually it found an opening and dangled free in darkness before becoming unmoored and falling through shadow.

The first drop landed on the man’s nose. Which did nothing.

The second dotted the flaky, cracked flesh of his forehead.

That also did nothing.

But the third drop. The third drop was the magic drop, tumbling out of darkness and falling upon his desiccated lips, from there easing down into his frozen, arthritic maw, moving past rotten teeth and touching the dark dry nub that once was a tongue.

When the blood touched that blackened stub, it came alive with a sharp sound: the sound of a spoon back cracking the surface of crème brûlée.

The tongue twitched. Swatches of crispy tongue-flesh fell away like flakes of char. Then the tongue did more than twitch: it flapped, flailed, seeking, needing.

The drops of blood from above became a steadier flow. The tongue shot out from the mouth, extended far, too far,
impossibly
far—and like a child catching snowflakes, it caught the blood.

It wasn’t long before the blackened tongue was blackened no more. Now it was pink, bright, stained with red.

The mouth opened wider as the blood now fell in an unsteady rain.

The sound of an animal’s cries and the coppery, greasy taste on Coburn’s tongue cut down through his dreams like a machete: he reached for them, the animal’s cries mingling with a child’s cries, the memory of wallpaper and linoleum soon replaced with a wall of darkness and the feel of stone beneath the island of Manhattan.

He lurched forward. His spine cracking, his bones brittle as sticks.

Blood fell from above. He cupped his hands—around his mouth so hard to move, the fingers like the stiff legs of dead bugs—and made sure not to miss a single drop of the sweet stuff. He was a junkie, a blood junkie, a Noo-Yawk
vampire
who thrived on this stuff and he hadn’t had it in—well, he didn’t know how long, but judging by the condition of his body, it had been a long fucking time.

What fell in his mouth wasn’t enough. Not nearly. He needed more. Would kill to have it—and had in the past, many times, too many times to count.

He tried to speak, but found his voice lost in the dead puckered flesh of his throat, his vocal cords naught but withered strings.

And so he decided to climb.

Coburn moved like a spider. Fingers mooring in the cracks of broken cement and crumbling brick, hauling himself up while still craning his neck so as not to miss any drop from the tiny waterfall of blood. When he found its source—the end of a rusted sewer pipe—he nursed on it like a baby.

Coburn pried his mouth from the blood—a task that borrowed from his last vestiges of will, a task that set off alarms and screams from the monster inside his head:
Go back, you’re going to miss it, you need it, you fucking ape you can’t exist without it, you’re a moron, you deserve to die—to die for real this time, to die for
good
.
And yet he persevered despite the cat-calls of his own worst survival instincts, letting the human mind—the one with reason and sense and the ability to see beyond a few drops of blood—take over from the reptilian fiend that wrenched at the puppet strings.

He swung out, using what little strength his dead body still possessed, and swung along pipe after pipe, a nightmarish subterranean jungle gym.

Then: he smelled it.

A faint breeze from above.

On it, the scent of blood. And a curious smell of rot.

Echoing down through the hole again came the animal’s cries, a kind of panicked bleating. Coburn hoisted himself through the hole, his mouth wet with blood, his jaw tight with hunger.

To his human mind, nothing here made sense. It was like that old game:
One of these things is not like the other, one of these things does not belong
. But it wasn’t just one thing. It was a metric shitload of things. It was
all
things.

Coburn hoisted himself up into an old movie theater that tickled the back of his memory somewhere behind the wall of hunger that dominated him. The theater lay in ruins—the ceiling was half-caved in, the scent of dust and mold sat heavy in the air. Scorch marks crept up the walls, blasted across the floor in a sooty asterisk. The screen itself hung in tatters. Rows of seats had fallen to disrepair.

But the thing that really twisted the noodle was the deer.

And the two men eating it.

The beast was a whitetail buck. Not standing, so much as leaning against the broken row of seats, its head thrashing, the creature crying out some sound between a child’s whimper and a beastly grunt. One man slumped against the creature’s haunches, biting into it the way another man might bite lustily into an apple. The other stood at the front, pawing at the whitetail’s face, fruitlessly snapping at the thing’s neck—but the animal, alive but weakened, kept jerking its head away from the attacker’s mouth.

Coburn didn’t understand one lick of what was going on.

And frankly, he didn’t give a shit.

Because
sweet goddamn
was he hungry.

He moved to feed. The deer no longer interested him. The blood of beasts was functional, but barely.

The blood of men, however, was king.

Coburn, his skin still tight, his bones and muscles still uncertain, stepped up atop a row of seats and almost fell—but he quickly regained his balance and walked across the seat-tops toward his prey.

He came first to the man chowing down on the deer’s ass, wrapped his hands around the fool’s skull and snapped the head back with a sharp, wet crack.

The smell hit him in the face like a thrown brick.

Rot. Decay. The sour stink of a wound gone bad.

We don’t drink from the sick
, said that horrible little voice inside Coburn’s head, but really, hell with that voice, and so he bit down anyway.

Black blood as thick as motor oil filled his mouth. It tasted of pus and of pain, but worst of all it tasted
worthless
.

See, humans possess a spark of something. Coburn didn’t care to ruminate on what that spark was: the divine, the soul, a glimmer of sentience, a social security number, whatever. Fact was,
life
was bright and alive inside every man, woman and child, and that glory dwelled—nay,
thrived
—in the blood. It was why the blood of a human was infinitely better than that of a beast: animals had an ember, a spark, but only a fraction of the total fire.

The blood of man offered the whole package. Life in claret sweetness.

This
blood had none of that. It was dead. Inert. Diseased.

Black as tar and worthless as baby shit.

Coburn’s head snapped back, recoiling with the disappointment of a starving man who’d just bit into a plastic fruit. His victim struggled, hissing, the hole in his throat gurgling and bubbling.

The man turned and lunged for Coburn with long, yellowed nails. His face was half-caved in, calling to mind a rotten pumpkin. A gobbet of super-fresh venison sat flat on the dead man’s tongue, the meat thick with tufts of deer hair.

The man was dead.

The vampire had little time to parse. The gurgling corpse lunged at Coburn, letting go of the deer. He wrapped his hands around Coburn’s throat and turned the tables: Coburn thought he’d be doing the feeding, but this dead sonofabitch was hungry, too. And strong.

That was when things went sideways.

The deer, sensing opportunity, kicked out with its back legs. A hoof caught Coburn’s rotting assailant in the temple, going through the fucker’s head like a broomstick through a block of softened butter. Whatever bullshit facsimile of life managed to animate him before was now gone, and the hands around Coburn’s throat went slack.

The whitetail was none too happy about this and continued to thrash. It bucked its head and drove one of its antler points through the chin of the other feeder trying to get a taste up front.

Coburn backpedaled, almost tripped over a seat as the deer panicked. He watched, equal parts starving and stymied, as the deer struggled—it had stuck its attackers at both ends. Antler under one’s chin, foot through the other’s head.

And it couldn’t get free.

It was then that Coburn’s veins tightened. His dead heart stirred: not with life, but with a hollow paroxysm of
need
and
want
.

He pressed his fingertips together, forming them to a single point.

Then Coburn corkscrewed his hand fast—faster than any human could manage—into the deer’s side, up under the ribcage, and grabbed hold of the creature’s heart and crushed it like it was a pomegranate.

The vampire removed his fingers, licked them clean, then pressed his face tight against the hole and drank. It tasted of grass and musk and animal stink but he didn’t care, because at least it wasn’t black blood, dead blood,
useless
blood.

The blood filled his throat, and for a moment, all was right in the world.

Sitting slumped up against a deer corpse, framed by two rotting pumpkin-heads, his mouth rimmed with gluey red, Coburn had time to reflect.

His first reach for memory was a stunted attempt: in the shadow of his own mind he found only broken pieces, like a photograph sliced into ribbons by a razor blade. He saw a flash of blonde hair: pigtails twisting, evading his grasp. The sound of a television announcer:
gonna be a rilly big shoe
. A shadow crawling in through the window. Then, time shifted, leapt forward suddenly, showcasing another flurry of images: a camping hatchet, an upturned middle finger, a bearded man, a gout of flame.

Didn’t make any sense, and whenever he tried to look deeper, those images turned to roaches and scattered from the light.