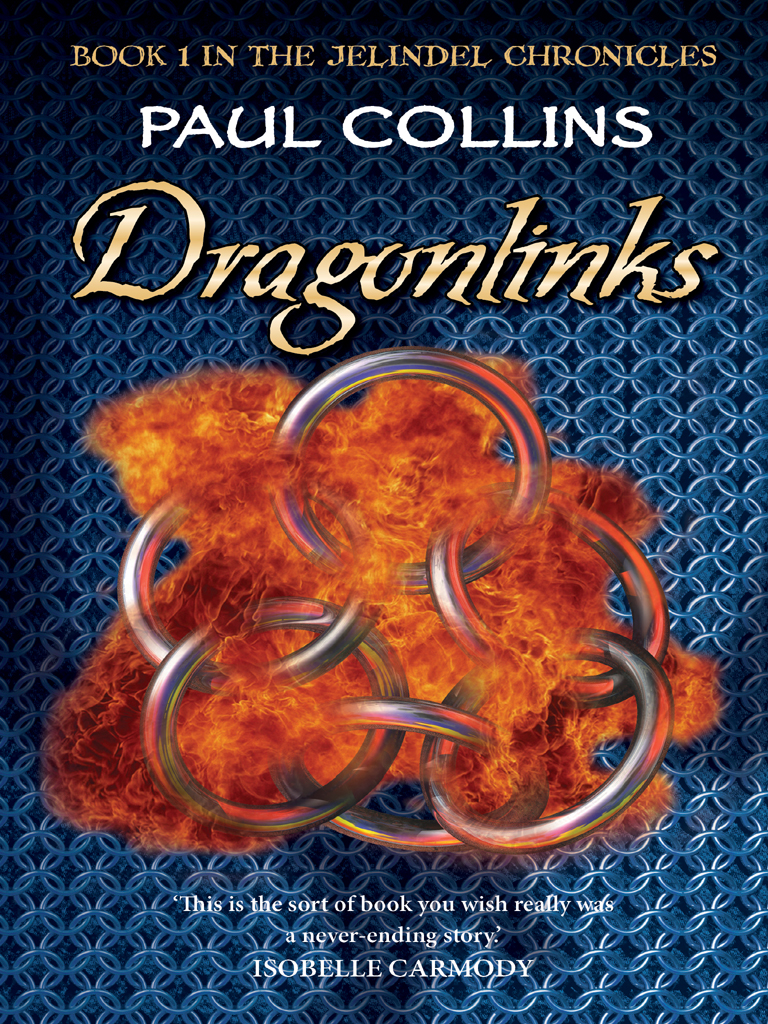 Paul Collins is a full-time writer of books for younger readers. He has been short-listed for several awards and has won the inaugural Peter McNamara, Aurealis and William Atheling awards.

Since the age of eighteen Paul has tried his hand at various occupations. He served time in the commandos, trained with the Los Angeles Hell Drivers and worked in hotel security, various factories and for a couple of years was a film repairer for Twentieth Century Fox and MGM in New Zealand. He has played cricket, soccer, rugby union and tennis for various clubs and has a black belt in both tae kwon do and jujitsu. His kickboxing âcareer' was short-lived although he did win his first fight with a 28-second TKO. He now weight-trains three times a week in a gym.

Paul currently lives in a rambling bluestone house in inner-city Melbourne. He shares it with children's writer Meredith Costain and a menagerie comprising a kelpie, a red heeler, a cat, two ducks, six chickens and fifteen goldfish. Visit him at
www.paulcollins.com.au
and
www.quentaris.com
.

The Glasshouse
(illustrated by Jo Thompson)

The Spell of Undoing

Lords of Quibbitt
(with Danny Willis)

BOOK ONE IN THE JELINDEL CHRONICLES

This publication is copyright. Apart from any use as permitted under the Copyright Act 1968, no part may be reproduced by any process without prior written permission from the publisher. Requests and enquiries concerning reproduction should be addressed to Ford Street Publishing Pty Ltd, 2 Ford Street, Clifton Hill VIC 3068.
Ford Street website:
www.fordstreetpublishing.com

Printing and quality control in China by
Tingleman Pty Ltd

From a concept by Sean McMullen

Dragonlinks
was inspired by the short story
“The Weakest Link” published in
Dream Weavers
under the pseudonym Roger Wilcox. 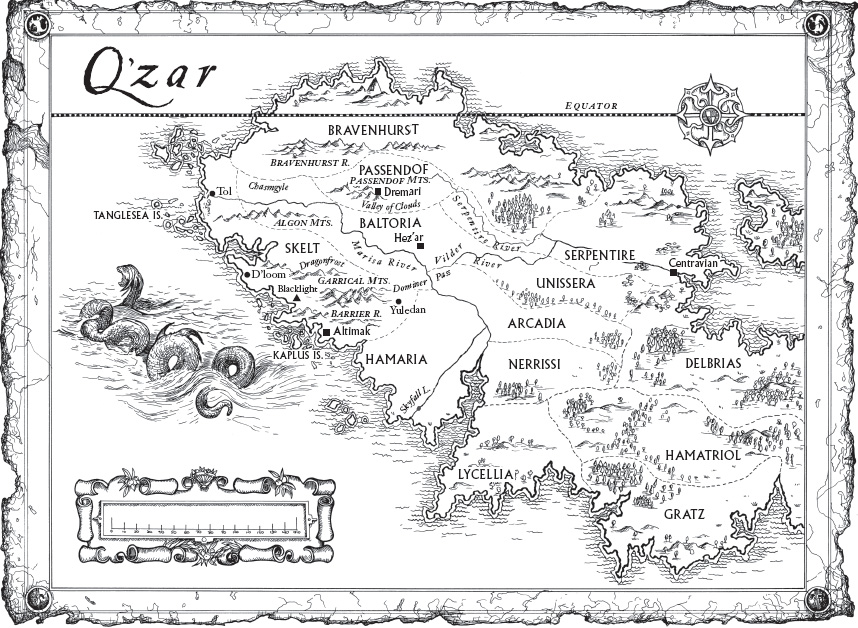 A
s sunset faded into the night of a lunar eclipse in the second month of 2128, Jelindel dek Mediesar longed to be free of the festivities. She couldn't leave too early â four generations of the Mediesar dynasty had travelled across Q'zar to commemorate both Grandmama's 100th birthday and the auspicious birth on the same day of Jelindel's new niece, Merinda.

Preparations for the event had been a two-week affair, with exotic wildlife being shipped from as far as Gratz, and tropical fruits imported from the northern state of Bravenhurst. The vast array of food was mouth-watering and a tribute to her mother's culinary expertise. There was soup made from slowly boiled pork liver and kidneys, plus whites of leeks, minced onions, vinegar, pepper and cloves, heads of wild boar, tusks included, with hot spicy gravy and a pudding of rice, spices, wine and honey; these were bordered by dishes of cygnets, chickens, pheasants
and herons, all cooked whole, with the skin and feathers carefully replaced before serving, plus numerous puddings: custards, jellies, cream of almonds, and fruit in a syrup of honey, wine and cinnamon.

Worn slightly ragged by the ordeal of helping prepare for the extravaganza â although nobility, the Mediesar family treated their staff well â Jelindel groaned inwardly as one of her brother's friends demanded she dance with him.

Lutiar
. The very thought of her brother made her broil. But even
he
seemed to be enjoying the night, despite the fact that he had angered his parents by inviting several surly friends. She allowed herself to be twirled around the room as the string quartet played a lively tune then popular among royalty.

A quick glance at the darkened window and Jelindel winced. The moment she had been waiting for was close at hand. She curtseyed to her dancing partner and smiled. âThank you, Master R'mel â your prowess upon the floor has quite weakened me.'

R'mel gripped her shoulder. âThe night is young, Mistress Jelindel. My legs could dance the evening away.'

Jelindel's resistance wilted. Before she could draw breath R'mel had guided her back to the assembling parallel lines of dancers. Jelindel knew this was a court dance that would last for twenty minutes. How could this be happening to her?

Twenty minutes. There might still be time at the end of it. She saw her father, Count Juram, being bustled through the melee to the podium. The master of the house always told the assemblage a story of two lovers who after many journeys finally meet one another. It was an elimination
dance and the couple left at the end were crowned King and Queen for the night. The storyteller's inventiveness or lack thereof had been the cause of both praise and embarrassment in high society over the years.

After catching several unwanted glances from R'mel, Jelindel grew anxious. To be crowned his Queen for the night would be her ruination.

But everyone else seemed very happy: her elder sister, Serain, resplendent in her turquoise ball gown and emerald-studded tiara; Grandmama, regal as ever in her elegant ruffled tunic and her tubular skirt; baby Merinda being adored and lavished with gifts by gooey-eyed guests. Jelindel so wanted to go to the bassinet and hold Merinda in her arms for the first time. The fact that she didn't she would regret for the rest of her life, for as fate would have it she would never see her family again after this night.

Jelindel remained in the line of excited debutantes. How could she take leave to satisfy her own desires when so many people had forsaken their time to celebrate this occasion? And the banquet! It would be the social gossip of the year! No, she would stay and make merry, dote on her new niece throughout the night, and yes, chance playing nasty R'mel's Queen if that pleased her family.

She turned at the hushed word. It was her kindermaid, Jeme. Jelindel curtseyed and thankfully withdrew from the line which closed immediately. She ducked as R'mel craned his neck in search of her.

Jeme had planned well. She drew a cloak over Jelindel's shoulders and bustled her out through a door frequented mostly by house staff.

âYou'll be gone and back afore they know you went missing, young lady,' Jeme chortled. Like the mother hen she was, Jeme pushed her charge up a flight of worn stairs, checked the way was clear, and swept Jelindel across the corridor to her bedchamber. When she closed the oak door she pushed her back to it for a chance to catch her breath. She crossed her chest and closed her eyes for a brief moment of penance.

âWe've both done wrong,' Jelindel told her, and pulled her from the doorway and to the window facing the courtyard. She leaned out of the window, staring at the sunset. With the ornate leadlight panes flung wide open she watched the red glow bleed slowly from the tumble of clouds on the horizon. The second youngest daughter of Count Juram dek Mediesar of D'loom had a magnificent view from her bedchamber window in the family mansion. To Jelindel nothing was as glorious as the sky, and no fairground or revel hall could ever match the luminous celestial spectacle that was hers every evening.

Surviving the Pain (A Baby Saved Me Series Book 1) by P. J. Belden
A Question of Love by Kirkwood, Gwen
I Am Juliet by Jackie French
I Still Remember by Bliss, Harper
World's Most Eligible Texan by Sara Orwig
No Law in the Land: (Knights Templar 27) by Michael Jecks
Bleeding Love by Ashley Andrews
Surprised By You (The By You Series) by Harper, Kelly
Franklin Goes to School by Brenda Clark, Brenda Clark
Coalescence - SF3 by Meagher, Susan X
Our partner